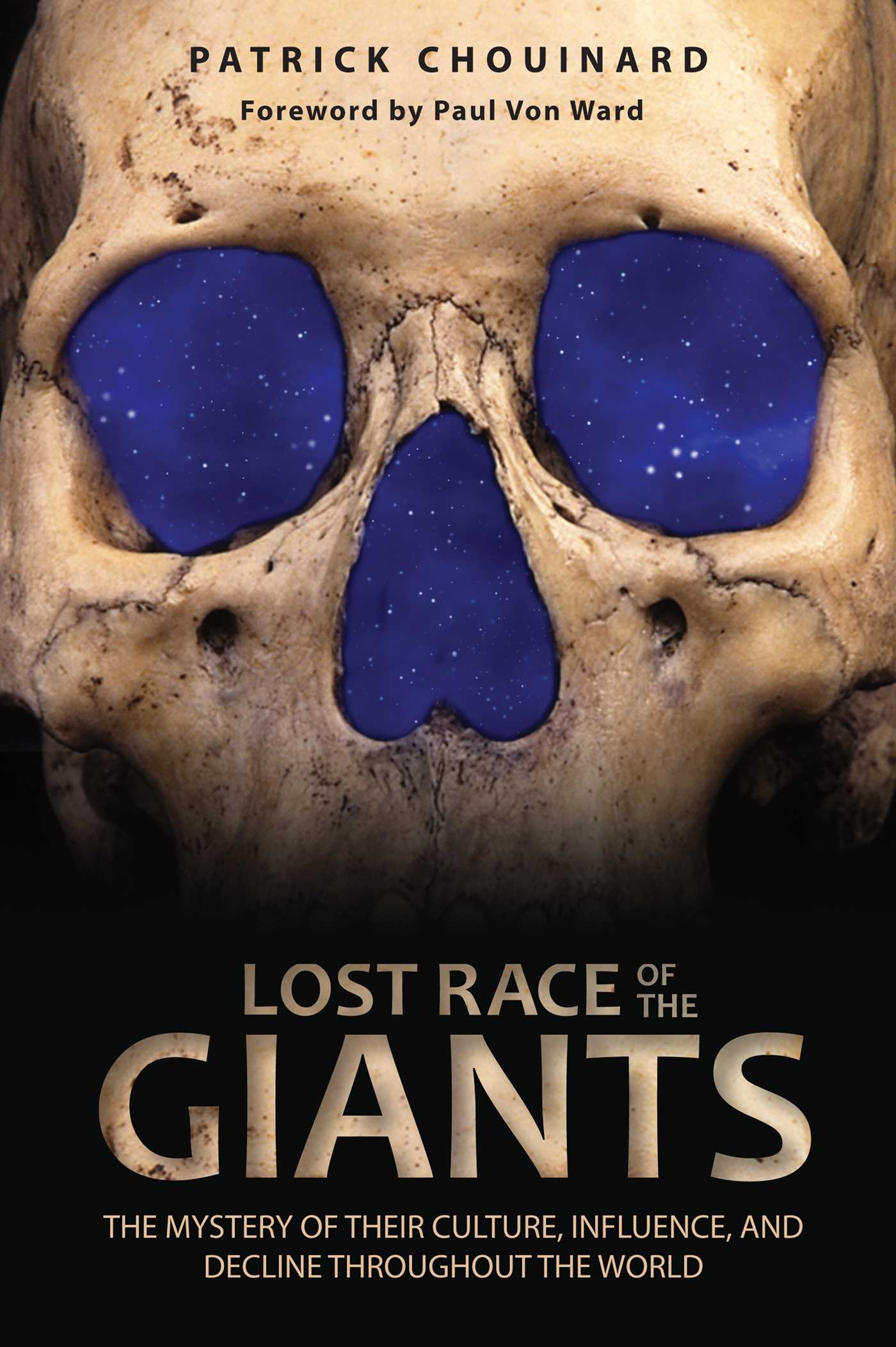 An exploration of mythological and archaeological evidence for prehistoric giants

• Examines the many corresponding giant mythologies throughout the world, such as the Greek and Roman titans, Norse frost giants, and the biblical Nephilim

Giants are a cornerstone of the myths, legends, and traditions of almost every culture on Earth. Stories of giants are often considered fantasies of the ancients or primitive attempts to explain natural phenomena, but archaeological discoveries of 10- and 12-foot skeletons--many of which have been suppressed--confirm the existence of a forgotten golden age of giants before recorded history.

Patrick Chouinard examines the staggering number of corresponding giant mythologies throughout the world, such as the Greek and Roman titans, Norse frost giants, the Hindu Daityas, the biblical Nephilim, the Celtic Formorach, the Sumerian Anunnaki, and the multitude of myths in which the sky or world is held aloft on the shoulders of a giant. He links these stories to Atlantis as well as other legends of prehistoric civilizations lost to cataclysm and great floods whose survivors spawned the rise of ancient civilizations. The author reveals how physical remains of giant-size peoples have been found on almost every continent, including recent finds in the deserts of Saudi Arabia, Afghanistan, and northern India as well as hundreds of excavations of giant mummies and skeletons across the United States, corresponding directly with Native American accounts of red-haired giants. He also examines reports from famous explorers such as Magellan, Sir Francis Drake, and Desoto of their encounters with giants on the North American continent.

Revealing how giants represent the true earthborn race, Chouinard explains how they engaged in open conflict with the extraterrestrial gods who created humanity for forced labor and how they passed their sophisticated culture and civilization on to humanity before being nearly wiped out in the great age of cataclysms.

Contrary to popular belief, archaeology did not just emerge in the past few centuries. In the late first century AD, shortly after the crushing defeat of the Jewish revolt at the hands of Titus, the Jewish historian Josephus tells us a new practice had become popular. Natural historians, the ancient forerunners of our modern scientists, were digging up giant bones that they then examined, documented, and cataloged. These were the rudiments of what would become archaeology and paleontology. They identified these early fossil specimens as the great heroes of antiquity. Examples of such demigods include Theseus, Hercules, Achilles, Ajax, and the various gods and monsters described in the many Greek and Roman legends.

Skeptics claim that what the ancients were finding were really the bones of long-extinct mammals and dinosaurs such as the mammoth or triceratops. However, current archaeological evidence indicates that giants thrived throughout the known world during prehistory. Since the nineteenth century numerous archaeological finds have demonstrated the validity of such claims. Indeed, we have ample discussion regarding the ancient practice of archaeology by such noted classical scholars as Plato and Herodotus. They described a great bone rush that once occurred among the city-states of ancient Greece and, later, in the greater territories of the Roman Empire. Their descriptions of some of these earliest archaeological discoveries indicate that the bones they exhumed from the ground did not belong to any normal human or animal, providing a foundation for the argument that we were preceded by a race of giants. Evidently, there was documented proof of the discovery of ancient, giant-sized bones that later paleontologists wrongly identified as belonging to mastodons and dinosaurs. For mainstream scholars the choice is simple. Either ancient peoples mistook prehistoric remains of dinosaurs or extinct mammals as belonging to the giants and heroes described in their ancient myths, or they downright imagined them. I propose a third alternative. Maybe what they were witnessing was the first known documented encounter with something from truly primordial times, remnants of the mythical Nephilim as described in the Bible or the Greek’s very own Titans and Cyclopes.

THE ANCIENT QUEST FOR GIANT BONES

According to the Greek historian Herodotus, there was an intense rivalry among the Greeks to gather together the various sacred bones and holy relics of the Classical world, in order to gain military dominance within the Peloponnese. In 560 BC, the oracle at Delphi told the Spartans that if they wanted to successfully overcome their chief adversaries--the Arcadian Tegea--they would have to locate the sacred remains of the hero Orestes. There was one problem: the Spartans had no clue where the tomb of Orestes lay. They returned to Delphi and requested that the Oracle give them more precise directions to the tomb. In response, they were given a cryptic verse about a forge and its blacksmith. The key to discovering Orestes, the Oracle insisted, can only be found when the forge is finally located. These words dumbfounded the eager Spartans, who felt betrayed by their own Oracle. But this misfortune was soon to be transformed.

While traveling through Tegean territory a retired Spartan cavalryman, Lichas, encountered a blacksmith working at his forge. Lichas approached the blacksmith and greeted him, striking up a conversation. The blacksmith then guided Lichas to his yard and told Lichas that over a year ago the smith had been digging his well when his spade struck something hard. It was then that the blacksmith came upon an awesome discovery. There was a huge coffin some 7 cubits long and over 3 meters in length buried in the earth. He opened the lid to the casket and found the skeleton of a giant, also 7 cubits long. At that moment Lichas realized the smith had found the tomb of Orestes. Lichas pretended to be an exile from Sparta and asked the blacksmith if he could rent a room in his home for the night. The blacksmith agreed. During the night, Lichas sneaked out into the yard and dug up the bones and took them back to his fellow Spartans. There was a great triumph through the city, trumpeting Lichas’s victory, and the bones were buried with much pomp and ceremony. As soon as they were in possession of this sacred talisman the Spartans took control of the Peloponnese and became the dominant power in the region.

Throughout the seventh, sixth, and fifth centuries BC the entire Greek world experienced a “bone rush,” as competing city-states searched for the bones of dead heroes and giants. According to folklorist Adrienne Mayor, “Every city sought the ‘peculiar glamour’--the religious anointment and political power--conferred by heroes’ remains. The impressive bones were a vital physical link to the glorious past.” We have to remember that in the Greek mythological tradition, heroes were always depicted as being of gigantic stature, as an exemplification of their superhuman abilities and importance within the ancient Greek pantheon.

The discovery of these bones stands as significant evidence for the existence of beings of giant stature in ancient times. However, some academic sources believe that rather than offering compelling evidence of giants in antiquity, it is more likely that the relics were misinterpreted fossils of extinct creatures from the Miocene period, an age inhabited by mammoths and giant giraffes. But if we take such detailed accounts at face value, these finds represent some of the greatest discoveries since the unearthing of the first dinosaur bones in the early nineteenth century.
Patrick Chouinard

“This was wonderfully organized and logical, easy to read, and fascinating. I have read a lot of giants books, but this one had a whole new avenue of information and concepts, theories and hypotheses that kept me riveted...This was an open-minded and refreshing take on a popular subject. It is getting a coveted space on my bookshelf.”

“It considers how the physical remains of giant-size peoples have been found on nearly every continent, considers reports from world explorers that document their encounters with such giants, and explains how giants interacted with extraterrestrial Gods. The result is a consideration of ancient mysteries that will delight any new age reader.”