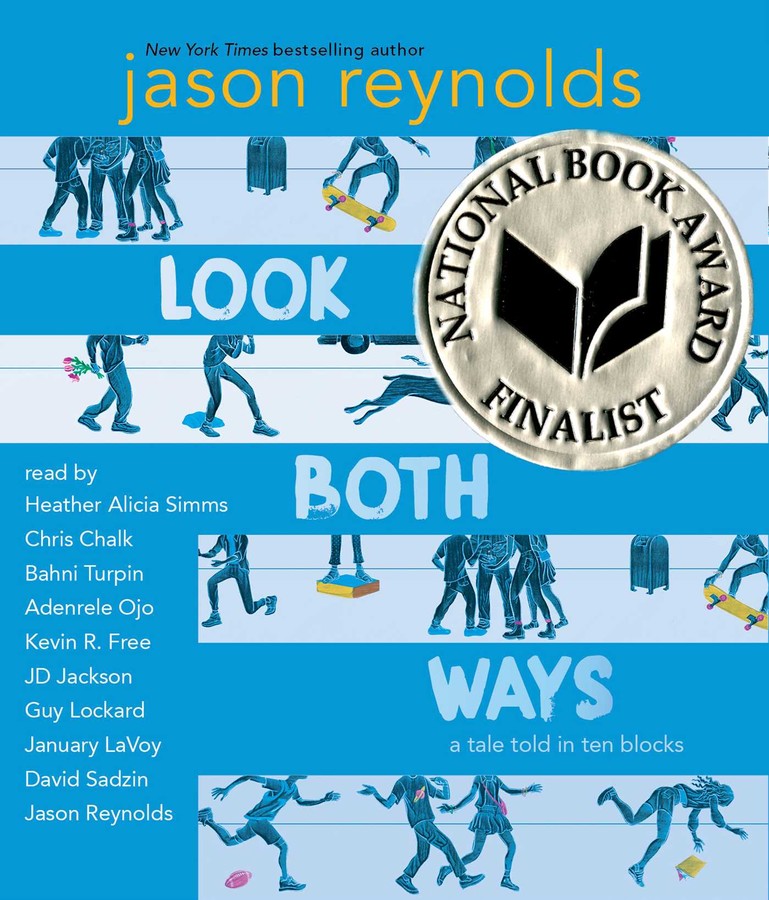 One of AudioFile’s Best Audiobooks of 2019!

This story was going to begin like all the best stories. With a school bus falling from the sky. But no one saw it happen. They were all too busy—

Jason Reynolds conjures ten tales (one per block) about what happens after the dismissal bell rings, and brilliantly weaves them into one wickedly funny, piercingly poignant look at the detours we face on the walk home, and in life.

By clicking 'Sign me up' I acknowledge that I have read and agree to the privacy policy and terms of use. Free audiobook offer available to NEW US subscribers only. Offer redeemable at Simon & Schuster's audiobook fulfillment partner. Must redeem within 90 days. See full terms and conditions and this month's choices.
A Reading Group Guide to

Look Both Ways: A Tale Told in Ten Blocks

Look Both Ways is composed of interconnected stories, each centering on different students at Latimer Middle School and set in one of the blocks surrounding the school. Through these ten stories, Jason Reynolds offers glimpses into the private struggles, strengths, and secrets of students who only know each other in passing. The book does not shy away from hard topics, and the characters deal with very real grief, fear, and loss with resiliency, compassion, and even humor. Realistic and moving, the book is fast-paced, funny, and empathetic, with a cast of characters that readers are sure to find relatable and likable. Look Both Ways reminds us to look at the world and the people around us more closely, and notice all the things that connect us to one another and our communities.

1. Jasmine says if she has to be something else, she would choose to be a water bear. Water bear is the common name for an organism called a tardigrade. Research these organisms online. What makes them unique? Why do you think Jasmine would want to be one? Would you want to be a water bear too? Explain your answer.

2. Jason Reynolds writes poetry as well as prose, and he has incorporated poetic language into this novel. As you read, look for examples of figurative language. For example, list all the similes you can find in the first chapter. How does the use of poetic language impact you as a reader? Why do you think a writer might choose to use this type of language?

3. Choose one of the chapters in the book and identify specific details in the text that develop the relationship between the characters in that chapter. What details does Reynolds reveal directly? What does he reveal indirectly? Examine the way other characters respond and speak to one another, as well as their thoughts, actions, and/or appearances.

4. Why do you think the Low Cuts only steal loose change? Explain how they use the money they collect in chapter two. What do their actions reveal about their values? Did your perception of them change once you knew how they were using the money?

5. Reynolds describes the Low Cuts as a “braid of brilliance and bravado.” What does this description suggest about the group?

6. Why do you think Reynolds begins and ends the third chapter, “Bastion Street,” with a series of statements that begin with the word maybe? What do you think would have happened if Pia and Stevie talked with each other?

7. Reynolds describes Pia’s skateboard as her voice. What do you think he means by that? How are you most comfortable expressing yourself? Do you prefer to use words or some other outlet?

8. Reynolds explains that Ty knows “the anxiety of a kind of war.” What is the source of Ty’s anxiety and confusion? Why do you think Bryson defends him? Have you ever felt similarly? If so, how did you handle those feelings?

9. How would you answer Benni’s question if she asked you how you were going to change the world? What change would you like to see?

10. How does Simeon and Kenzi’s street differ from other neighborhoods in the book? Why do you think the boys call themselves brothers?

11. Explain why Satchmo is afraid of dogs. Have you ever had a bad experience that caused you to fear something? Satchmo makes an elaborate escape plan to deal with his fear. What have you found that helps you face your fear?

12. Why do you think Cynthia considers her mother her hero? How does laughter help her and her grandfather deal with grief and loss?

13. How do you think Sandra responds to Gregory after she smiles? Explain your answer.

14. The final chapter begins with a string of metaphors describing a school bus. Choose two or three metaphors that you find especially effective, and explain what you think each metaphor you selected means.

15. Which one of the chapters did you like the best? Which character did you most relate to? Explain your answers.

16. Several of the characters in the book are victims of bullying or harassment; think about Pia, Stevie, Bryson, and TJ. How do these characters respond when they are bullied or harassed? Which character do you think deals with the problem in the healthiest way? What advice would you give someone who was being bullied or harassed? What steps could you take in your community to try to prevent this kind of behavior?

17. The subtitle of Look Both Ways explains that it is a “tale told in ten blocks.” While each chapter in the book can be read as a stand-alone story, Reynolds uses repetitive images, settings, and characters to connect the stories. Identify one of these connecting devices and explain how it links the stories.

18. Although the characters in each story go to the same school and live in the same neighborhood, they don’t really know each other or understand the struggles that their classmates face. If you could orchestrate a friendship between two characters from different stories, which characters would you want to be friends? Explain your answer. Do these interactions make you think any differently about classmates or friends in your own life? Is there someone whom you’d like to get to know better?

19. “Canton smiled, knowing a school bus is many things. So is a walk home.” What do you think these last lines of the book mean? What does Canton realize after observing his classmates?

20. Why do you think Reynolds titled this book Look Both Ways? Can you think of different meanings for the title?

1. Using details from the text, visualize the setting and create a map of the neighborhood around Latimer Middle School. Identify and label locations where key events in each chapter take place. How do you think the characters would react looking at your map and seeing how much goes on in the blocks surrounding their school? Think about what might go on unnoticed around your school, and discuss with your classmates.

2. Ms. Broome, the English teacher, gives a writing assignment: “[She] wanted each student to write about being something else. Not a person. A thing.” Complete this assignment, explaining what you would be and why you’ve chosen this object.

3. One of the themes running through Reynolds’s book is the value of empathy. Analyze the role that empathy plays in the novel. What effect does giving or receiving empathy have on the characters? List some of the occasions in which you see characters empathizing with one another.

4. Write your own short story using one or more characters and settings from Look Both Ways. You may want to develop the backstory of one of the characters, imagine a future incident, write from a different point of view, or have characters from different stories interact.

5. How well do you know the other kids in your school? Interview a classmate whom you don’t know very well, and then switch roles and let them interview you. What did you learn about each other? What were you most surprised to find out?

6. In the last chapter, Canton works on an assignment that requires him to “record human environmental interaction.” When he watches his schoolmates, what does he notice? Spend thirty minutes completing a similar assignment: record human environmental interaction in a place where people gather, such as a store, restaurant, school bus, sporting event, playground, or cafeteria. What do you notice about the way that people interact with each other? Is there anything you might apply to your own actions and behaviors? 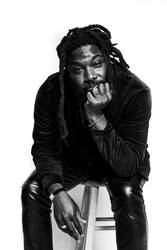 Jason Reynolds is a #1 New York Times bestselling author, a Newbery Award Honoree, a Printz Award Honoree, a two-time National Book Award finalist, a Kirkus Award winner, a Carnegie Medal winner, a two-time Walter Dean Myers Award winner, an NAACP Image Award Winner, and the recipient of multiple Coretta Scott King honors. He’s also the 2020–2021 National Ambassador for Young People’s Literature. His many books include All American Boys (cowritten with Brendan Kiely), When I Was the Greatest, The Boy in the Black Suit, Stamped, As Brave as You, For Every One, the Track series (Ghost, Patina, Sunny, and Lu), Look Both Ways, and Long Way Down, which received a Newbery Honor, a Printz Honor, and a Coretta Scott King Honor. He lives in Washington, DC. You can find his ramblings at JasonWritesBooks.com.

Jason Reynolds is a #1 New York Times bestselling author, a Newbery Award Honoree, a Printz Award Honoree, a two-time National Book Award finalist, a Kirkus Award winner, a Carnegie Medal winner, a two-time Walter Dean Myers Award winner, an NAACP Image Award Winner, and the recipient of multiple Coretta Scott King honors. He’s also the 2020–2021 National Ambassador for Young People’s Literature. His many books include All American Boys (cowritten with Brendan Kiely), When I Was the Greatest, The Boy in the Black Suit, Stamped, As Brave as You, For Every One, the Track series (Ghost, Patina, Sunny, and Lu), Look Both Ways, and Long Way Down, which received a Newbery Honor, a Printz Honor, and a Coretta Scott King Honor. He lives in Washington, DC. You can find his ramblings at JasonWritesBooks.com.

"Ten African-American narrators read these ten interconnected stories, and their performances are uniformly excellent, bringing the cast of characters to vivid life. Listeners follow the varied adventures of students as they walk home from school. In 'Call of Duty,' read by Kevin R. Free, Bryson stands up for a boy who gets kissed by another boy at school; in 'Satchmo's Master Plan,' read by Guy Lockard, Satchmo devises an elaborate escape plan in case the new dog next door gives chase. Author Reynolds's vibrant language, delivered by the narrator ensemble with style, makes every situation and detail—whether funny, outlandish, sad, or tender—feel genuine, relatable, and full of heart. Reynolds reads the final chapter himself, a poetic conclusion that connects all of the threads in this perfect middle-grade novel."