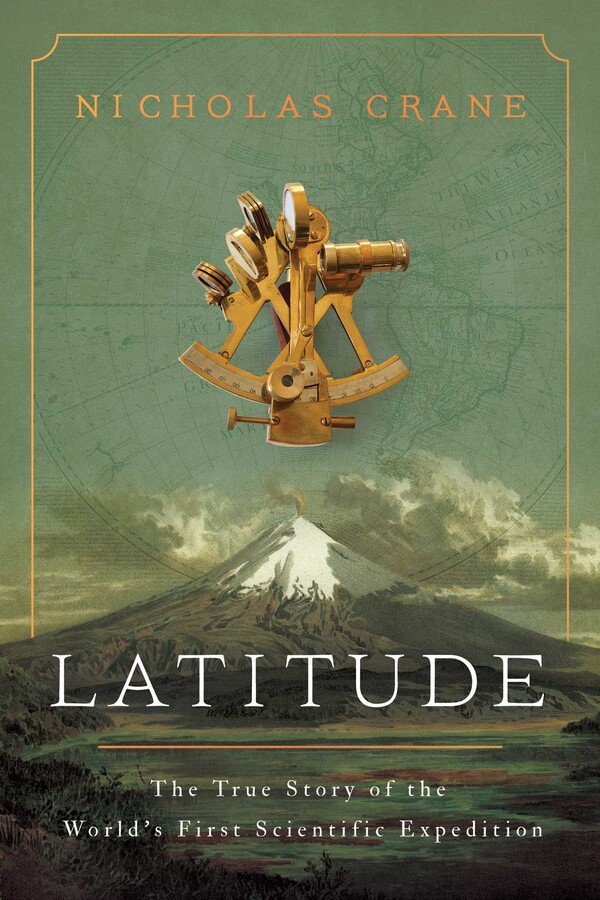 The True Story of the World's First Scientific Expedition

Latitude is a gloriously exciting tale of adventure and scientific discovery that has never been told before.

Crane, the former president of the Royal Geographic Society, documents the remarkable expedition undertaken by a group of twelve European adventurer-scientists in the mid-eighteenth century.  The team spent years in South America, scaling volcanoes and traversing jungles before they achieved their goal of establishing the exact shape of the Earth by measuring the length of 1 degree latitude at the equator.

Their endeavors were not limited to this one achievement. Not only did their discovery open up the possibility for safe, accurate navigation across the seas, they also discovered rubber and quinine. With a narrative that reads like it was taken from the script of an adventure movie, Nicholas Crane brings to life a narrative that is a timely reminder of how scientific discovery can change the world and our future.

By knowing the shape of the earth we can create maps, survive the oceans, navigate the skies, and travel across the globe. Without latitude, maps and navigation wouldn’t be accurate, lives would have been lost, and exact locations of cities and rivers would never be known. After ten grueling years in search of a magic number, the survivors returned to Europe with their historical discovery that fueled the public’s interest in science.

Twenty-five years ago, Dava Sobel’s bestselling Longitude was a global publishing phenomenon, yet it told only one half of the story. With Latitude, this cornerstone piece of our shared history is now complete with this tale of a trip that changed the course of human civilization.

Filled with raw excitement and danger, Latitude brings the challenges that faced these explorer-scientists to vivid life.

Nicholas Crane  is an award-winning writer, journalist, geographer and explorer who has presented BAFTA winning, BBC TV series Coast.  He writes for the Daily Telegraph, the Guardian and the Sunday Times. Nicholas has travelled extensively in Tibet, China, Afghanistan, Africa, and he identified and visited for the first time the geographical Pole of Inaccessibility, the point on the globe most distant from the open sea, in the Gobi Desert.

"Entertaining and erudite...In what was to become thought of as one of the first modern exploring expeditions, on May 12, 1735, the Portefaix set sail from the port of Rochefort on the French Geodesic Mission to the Equator. What follows is the 'astonishing adventure' of Crane’s Latitude."

"In 1735, a group of international scientists set sail for the equator. Their goal was to measure the length of one degree of latitude in order to come to a better understanding of the shape of the planet. The expedition faced steep mountains and dense rainforests as well as unpredictable weather and dangerous earthquakes. In a narrative that often reads like an adventure novel, Crane fluidly shares their story, including details and excerpts gleaned from their journals…A fascinating account of an overlooked scientific endeavor."

"Latitude is a science story and an adventure worthy of Robert Louis Stevenson, written with elegant flair by the Royal Geographic Society’s Nicholas Crane."

Praise for Nicholas Crane’s Mercator: The Man Who Mapped the Planet

“Mercator's story is fascinating.....Crane’s book is a good introduction to the father of modern mapmaking.”

"A brilliant biography of a man who gave us a new way of looking at the world.”

“Perhaps there is something of the Mercator about Nicholas Crane, for this is a gracefully written, highly readable and painstakingly researched volume.”

“A huge achievement. This rich and rewarding biography of the man who changed the way we look at the world”

“A fine biography.  Crane manages to evoke and explain the complex intellectual atmosphere which fostered his genius.”

“Crane's absorbing biography does equal justice to his subject's life, time and scholarly works, which, as one would expect, ranged far beyond the realm of geography.”

“A scholarly and detailed account of life in Europe in the Age of Discovery, it is also an imaginative and vivid biography of a devoutly religious man who was a distinguished instrument maker and map engraver. A fascinating book.”

“A tour-de-force of historical biography, throwing the life of this little-known genius into brilliant relief.”

The True Story of the World's First Scientific Expedition