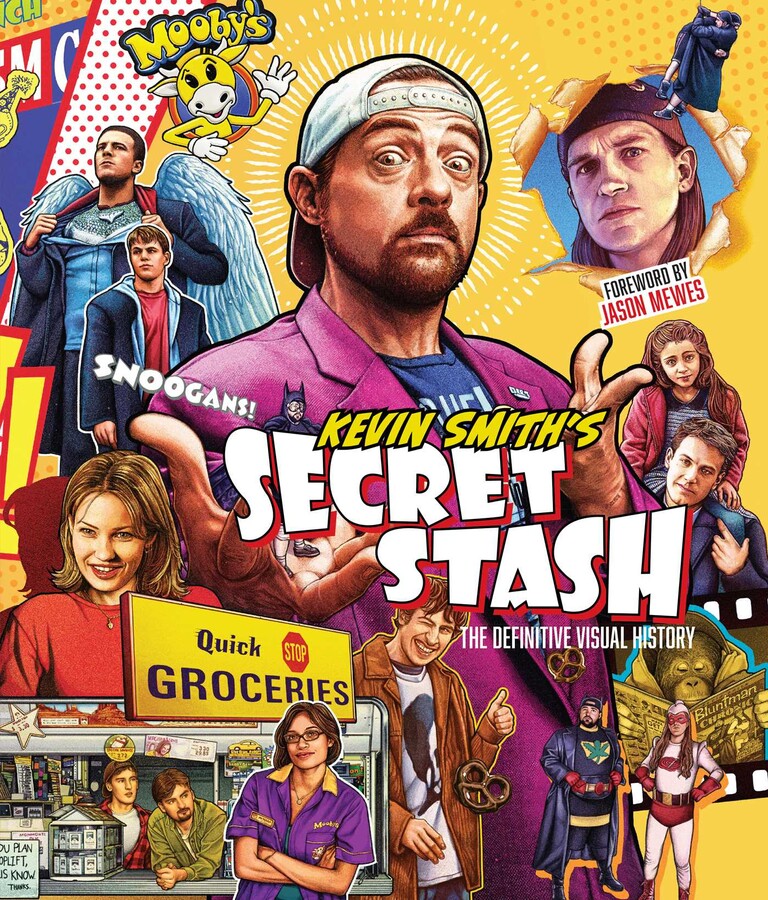 “Being Kevin Smith is my favorite thing in the world. . . . I don’t have a job. I don’t even have a career anymore. I’m just me for a living.”

Snootchie bootchies! Kevin Smith tells the full story of his incredible life in this hilariously candid treasure trove of artifacts and anecdotes collected across his 25 years in the entertainment industry.

Making the leap from convenience store worker to international film icon, Kevin Smith has spent over 25 years at the forefront of pop culture. For the first time, Kevin tells the full story of his incredible life, from his early days in Highlands, New Jersey, through to the breakout success of low-budget indie smash Clerks in 1994, and the series of hit films that allowed him to build his own cinematic “View Askewniverse.” Definitive, revelatory, and packed with exclusive surprises, Kevin Smith’s Secret Stash is the book his followers have been waiting for and a must-have for pop culture fans everywhere.

• THE STORY OF KEVIN SMITH, TOLD BY KEVIN HIMSELF: Candid, funny, and confessional, Kevin Smith’s Secret Stash also sees the director hold forth on all aspects of his career, including his live shows and podcasts, plus his comics and television work, such as the hit AMC show Comic Book Men.

• DISCOVER KEVIN SMITH’S SECRET STASH: This deluxe volume is illustrated with a wealth of rare and never-before-seen treasures from Kevin’s personal archives, including script pages, personal letters, and concept art from beloved movies including Mallrats, Chasing Amy, Jay and Silent Bob Strike Back, Red State, Tusk, Jay and Silent Bob Reboot, and more. It also features a range of special pullout features exclusive to the book, such as Kevin’s application to film school and the letter he received confirming that Clerks had been accepted to the Sundance Film Festival.

• OWN THE DEFINITIVE TRIBUTE TO A POP CULTURE ICON: A must-have collector’s item and a great gift for any movie fan, Kevin Smith’s Secret Stash is the ultimate homage to an iconic filmmaker.

Kevin Smith (@ThatKevinSmith) is the fat guy who got thrown off the plane. He also made Clerks once. He currently lives in Los Angeles, California.