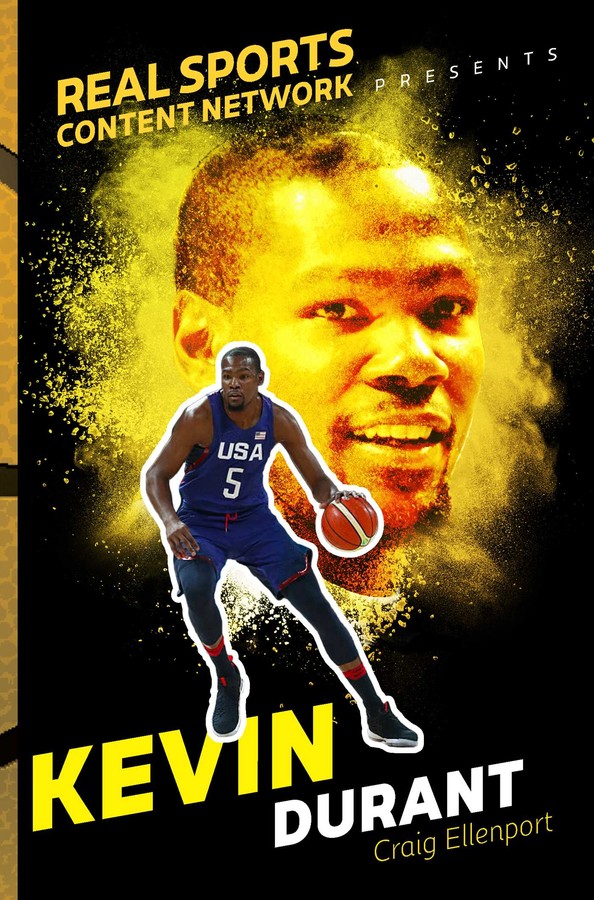 Learn about NBA superstar Kevin Durant in this book in a nonfiction series about your favorite athletes’ childhoods and what (or who) helped them become the stars they are today!

He’s 6’ 9” with a wingspan of 7’ 5”, and everyone knows him as KD. He’s a two-time NBA champ, two-time Finals MVP, and four-time Scoring Champ. He’s Kevin Durant, and the NBA has never seen a player quite like him before.

However, as impressive as the stats may be, what’s even more impressive is the journey that Kevin Durant took to come to the NBA. Born in a suburb of Washington, DC, Durant quickly discovered basketball as a way off of the dangerous streets and out of a life of laboring for little reward. But he also learned that if he wanted to make it as a professional, he would need to work—and work hard! Durant wasn’t afraid to do that and by high school he had become one of the best prospects in the thriving DC basketball scene. After a year of college, KD made the leap to the pros and he’s never looked back.

Learn all about the childhood that put him on the path to success in this fascinating biography.

Chapter 1: First Title CHAPTER 1 FIRST TITLE
Fifty-five seconds—less than a minute. That’s how much time was left in Game 5 of the 2017 NBA Finals, and it was not enough time for the Cleveland Cavaliers to overtake the Golden State Warriors. There would be no miracle comeback this time. Not like the previous year, when Golden State had led Cleveland three games to one, only to see the Cavaliers win three straight games and capture the title.

This time Game 5 was out of reach for the Cavaliers, and it was clear that the Warriors were about to win their second NBA title in three seasons.

Fifty-five seconds, and it would all be over. But Kevin Durant couldn’t wait. Overcome with emotion, he went to the half-court line, bent down on one knee, and said to himself, “Is this really happening?”

That’s when teammate Andre Iguodala came over to remind Durant that the game wasn’t over yet. “Get up!” his teammate shouted. “Keep playing ’til the end!”

What is it that veteran players say about how to properly celebrate?

But Kevin Durant had not been there before. He hadn’t been playing for the Warriors when they’d won the title in 2015. Sure, he had enough individual honors to fill an arena: Rookie of the Year…regular-season MVP…all-star game MVP…eight-time all-star…four-time NBA scoring champion…Olympic gold medalist.

But Kevin Durant had never been an NBA champion…until those final fifty-five seconds had ticked off the clock at the Oracle Arena in Oakland, California, wrapping up one of the most amazing and dominant playoff runs in NBA history. Before facing Cleveland in the finals, Golden State had swept through the playoffs without losing a single game.

The Warriors had opened the postseason with a first-round matchup against the Portland Trail Blazers. Four-game sweep. Then came the Utah Jazz. Four-game sweep. Surely things would get a little tougher when they faced the mighty San Antonio Spurs in the Western Conference Finals. Maybe, but the result was the same: four-game sweep.

Durant found himself in the NBA Finals for the second time in his career. Five years earlier, in 2012, he’d helped the Oklahoma City Thunder reach the finals, only to lose in five games to the Miami Heat. That series marked the first NBA championship for another superstar—LeBron James. It set off a chain of events that will forever link James and Durant.

That 2012 title was the first of three NBA championships for James. He won again with the Heat in 2013. The Heat was back in the finals a year later, but they lost to the Spurs. Before the 2014–15 season, James was a free agent. He shocked the NBA universe by returning to the Cleveland Cavaliers, the team he’d played with for his first seven years in the league. He led the Cavaliers to the NBA Finals that season, only to lose to the Warriors. But when the Cavaliers and Warriors met again in the NBA Finals in 2016, James would not be denied.

And that’s where Durant comes in. The 2015–16 Golden State Warriors finished the regular season with a record of 73–9, the best single-season record for any team in NBA history. With a roster that included all-stars such as Stephen Curry, Klay Thompson, and Draymond Green, the Warriors were almost unbeatable. And yet the Cavaliers pulled off the upset, coming back from a 3–1 deficit to take the title in seven games and bring an NBA championship to the city of Cleveland for the first time ever.

After the Warriors lost in the finals, most NBA experts predicted that the team would be a force in the 2016–17 season and have a good chance to get to their third straight NBA Finals with the existing lineup, which had just won seventy-three regular-season games.

But the Warriors were not content to cruise into the next season without improving their lineup. And they did so with a bang.

Durant was the most coveted free agent following the 2015–16 season. He and Russell Westbrook were the foundation of an Oklahoma City Thunder team that had been to the NBA Finals in 2012 and had been up three games to one against the Warriors in the 2016 Western Conference Finals, only to see the Warriors come back and win. Many fans hoped Durant would re-sign with the Thunder.

On July 4, 2016, Durant wrote a story for the Players’ Tribune website, announcing his decision:

“The primary mandate I had for myself in making this decision was to have it based on the potential for my growth as a player—as that has always steered me in the right direction,” Durant wrote. “But I am also at a point in my life where it is of equal importance to find an opportunity that encourages my evolution as a man: moving out of my comfort zone to a new city and community which offers the greatest potential for my contribution and personal growth. With this in mind, I have decided that I am going to join the Golden State Warriors.”

Durant’s decision was met with much criticism. Why would he sign with a team that was already loaded with talent and didn’t really need another superstar?

Durant spent a lot of time talking about that subject, since he was asked about it almost everywhere he went during the 2016–17 season. But when those final seconds ran down in Game 5 of the NBA Finals, Durant got the only answer he needed.

For the first time in his career, he was an NBA champion. Not only that—Durant was named the NBA Finals MVP.

Durant continued to hear from his detractors that he had taken the easy way out by joining the Warriors. Many of the things people were saying about him were pretty hurtful. But Durant had the ability to drown out what he called “the noise.”

He had been through much worse in his life. It wasn’t as if he’d been able to do whatever he wanted when he was a kid. The young Kevin Durant had worked tirelessly and had earned all the achievements and accolades that would come.

Craig Ellenport is a sports journalist who has written more than a dozen books. During his thirty-year career, he has covered the NBA, NFL, NHL, MLB, college football, and tennis.