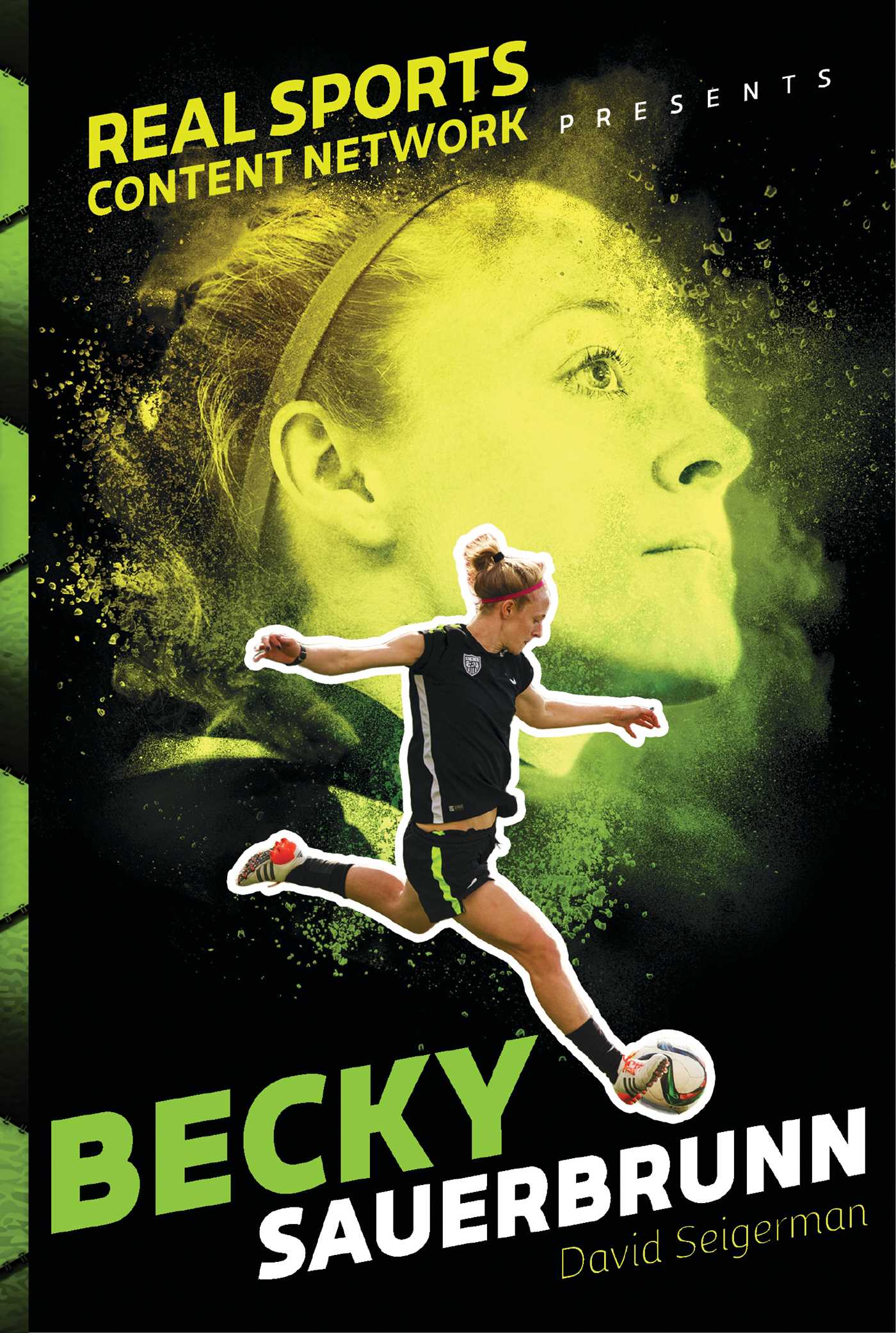 Before she was scoring goals, Becky Sauerbrunn was just a kid trying to fit in. Learn more in this first book in a brand-new nonfiction series about the childhoods of your favorite athletes.

Midway through her first soccer game for the US Women’s National Team, Becky Sauerbrunn broke her nose. More to the point, it exploded, really, in a head-to-head collision. Still, it never occurred to her to leave the field until she saw the horrified reaction from her teammates and coaches. Sauerbrunn’s toughness is one of the reasons she has developed into perhaps the finest defender in women’s soccer on the planet.

The source of that toughness? Being the younger sister to two older brothers. Becky would do anything to play with her brothers—including allowing them to duct tape plywood to her forearms so she could play street hockey goalie and have her brothers shoot slapshots at her. Or letting them wrap her in blankets (so tightly she still has a phobia of bundling up) and launch her off the bed, trying to see how far they could get her to fly.

But Sauerbrunn’s brothers also helped her in another important way—they helped her learn to read, which fueled a lifelong passion for books. In fact, she believes that reading has helped train her brain for the kind of problem-solving challenges she faces on the field, defending the most talented forwards in the world. Her cerebral approach, combined with her toughness, are the keys to her soccer success—the roots of both can be traced back to the little girl who wanted to hang with her brothers.

Becky Sauerbrunn CHAPTER 1 FACING A CHALLENGE . . . LITERALLY
Oh, man. That really hurt. Fifty-nine minutes into the first soccer game she ever played for the US Women’s National Team, Becky Sauerbrunn realized something was wrong. She had just tried something she’d done on the soccer field a thousand times before: battling an opposing player for a ball in the air. Becky attempted to knock the ball upfield with a flick of her head. The forward from Canada’s Women’s National Team had other plans; she wanted to head the ball past Becky and in the direction of the Team USA net. It was a typical soccer moment in the middle of a typical soccer game.

Only this time, the Canadian player missed. Instead of striking the ball with her head, she accidentally headed Becky sharply and squarely in the middle of her face. And, man, did it ever hurt.

For perhaps the first time in her soccer career, Becky wasn’t sure what to do next. She had never been hurt on a soccer field before, at least not to the point of having to leave a game. During her four seasons at the University of Virginia, she had missed a total of ten minutes of game time; she probably couldn’t have given directions to the sidelines, she’d spent so little time there in college.

Should she take a knee, as players are coached to do from their earliest days, when they’re learning to dribble a ball through a slalom course of mini orange cones spread out across a grassy patch in a neighborhood park? Should she try to get the referee’s attention, to stop play long enough to get checked out? This whole situation was new to Becky, the pain and the uncertainty.

She did the one thing she surely knew how to do. She got up. Becky had decided she needed to shake it off, get back in position, and get ready for the next play.

After all, this was her first taste of a dream in the process of coming true: She was playing for her country at her sport’s highest level. Years and years of practicing and playing, training and trying, working and waiting, had landed her here, inside the Foshan Sports Center Stadium in Foshan, China, at the 2008 Four Nations Tournament, starting on the back line of one of the best teams in the world of women’s soccer. After everything it took to get here, she wasn’t about to walk off the field, to leave her first cap—a player earns a “cap” every time he or she plays for his or her national team—while there was still time on the clock.

Becky had gotten opportunities to play before because teammates had gotten injured. In fact, she was having the rare experience of starting her first game for the National Team because one of the team’s other center backs had sprained her ankle in a training session in the days leading up to the tournament. No one gets to start their first cap. Was she really going to let a missed header knock her out of her National Team debut? And maybe make her lose the spot she’d worked so hard to get?

Then she reached up to feel her nose. And it wasn’t exactly where it was supposed to be.

“My nose felt like it was on the wrong side of my face,” Becky said later. “It was completely pushed in.”

Becky hadn’t noticed that her nose was bleeding, not until she looked down and saw blood flowing everywhere. Her first thought was that she should cup her hands and try to catch the blood. She didn’t want to mess up her jersey—her brand-new USA jersey. Especially since she figured she’d be right back out on the field after the team doctors patched her up. No reason to leave a game over a bloody nose, right?

Wrong. Becky began to realize it was worse than some regular old nosebleed as soon as she saw the horrified reaction of her teammates. She recognized in their eyes the kind of look people get when they’re watching a particularly gross or gory moment in a monster movie. Only they were looking at her face.

That was enough to send Becky to the sidelines for help. The team doctor took one look at her and immediately brought Becky into the locker room and laid out her choices: She could have it reset right then and there, endure one long bleed and be good to go, or she could go back to the hotel, calm down, and have it fixed later.

Before Becky was allowed to decide, the doctor told her to take a good look at herself in the mirror. That was all the convincing she needed.

“It was horrendous,” Becky said. “I said, ‘We absolutely need to do this right now.’?”

That’s what they did. The doctor laid her back, started feeling around her nose, noting all the cartilage that had been displaced. On the count of three, the doctor said, he would snap her nose back to where it belonged.

“He did it on two. That’s what doctors do,” Becky said, recalling years later how with one quick move the doctor squished her nose back into place.

The team didn’t have a protective face mask available for Becky to wear, so they fashioned one out of random equipment they could find in the kit—“MacGyver-inspired,” Becky called it, remembering an old TV series from the 1980s about a secret agent who defuses bombs and saves the world by using whatever household items happen to be lying around at the moment. They fastened the mask to her face with Velcro from shin guard straps, and Becky was back on the back line.

Not for that game, of course, or the next one. But she was back in the lineup for the Four Nations final, which the United States won, 1–0, against China. The tournament-winning goal was scored by veteran midfielder Shannon Boxx. On a header. On an assist from her newest teammate. The one wearing the funny makeshift face mask.

In the years since, Becky Sauerbrunn has established herself as one of the premier defenders on the planet. She was honored as the Defensive Player of the Year in each of the first three seasons of the National Women’s Soccer League’s existence. She has earned more than a hundred caps for the US Women’s National Team, winning an Olympic gold medal and a Women’s World Cup for her country along the way. In 2016, she was named one of the cocaptains of the USWNT as the team prepared for the Brazil Summer Games.

Her playing style is defined by her smarts and her toughness. “A silent assassin” is how National Team coach Jill Ellis once described her. Where did she first develop those traits that have been so vital to the success she has experienced on the soccer field? 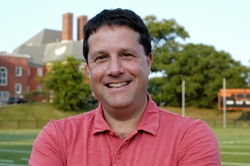 David Seigerman is a veteran sports journalist whose writing career began in newspapers (Newsday, The Jackson Sun) and moved on to magazines (College Sports Magazine). In 1996, he moved from print to broadcast media, becoming a field producer for CNN/SI and later the managing editor at College Sports Television. Since 2003, he has been a freelance writer and producer, and in late 2016, he cofounded HowFarWouldYouGo.org. He lives in Westchester County, New York, with his family.