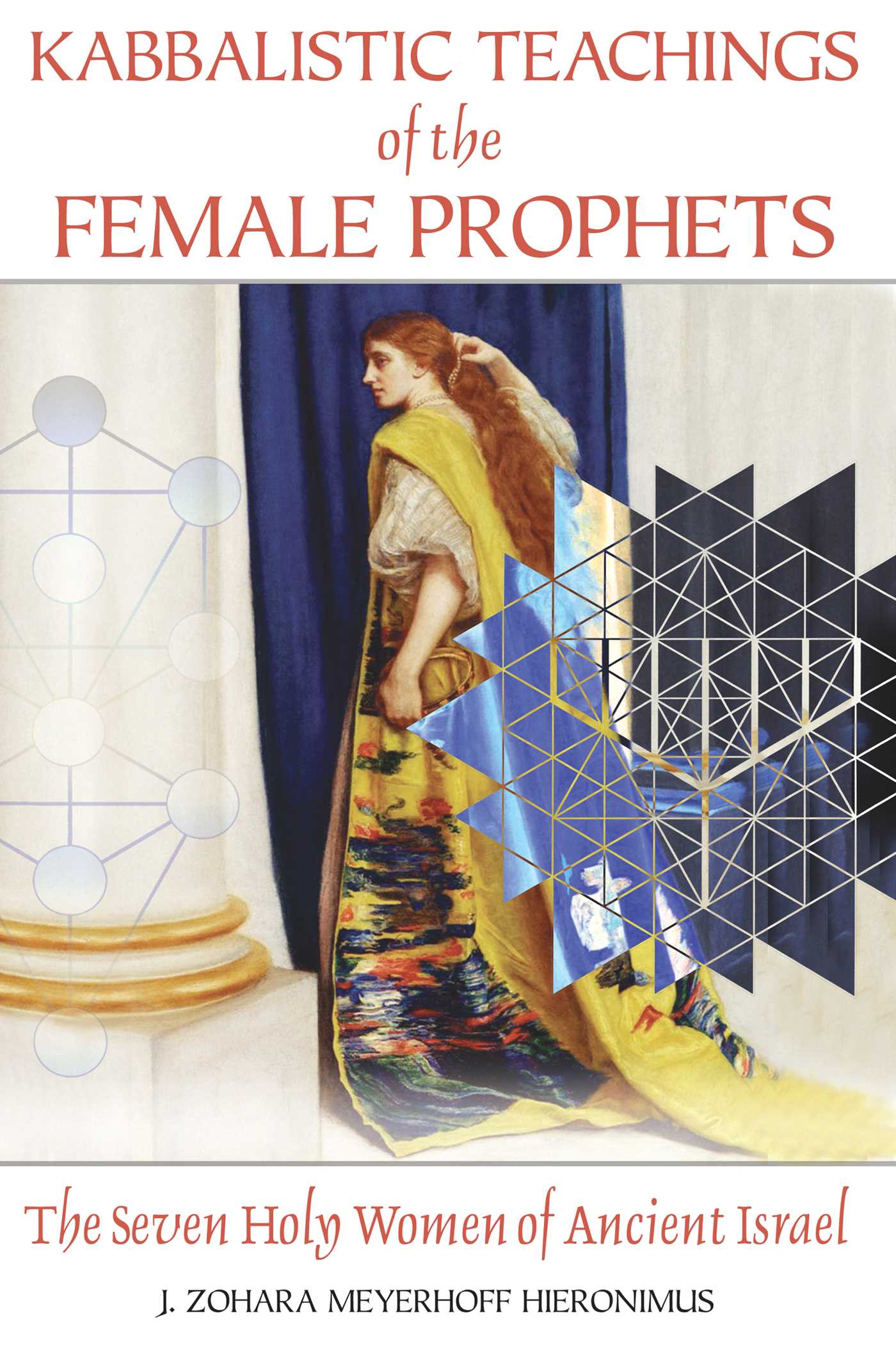 • Uses the gematria of Jewish metaphysics to demonstrate that prophecy is a mystical initiatory path by which Divine Will is made known, not only a tool for telling the future

The seven prophetesses of Israel--Sarah, Miriam, Devorah, Chanah, Avigail, Chuldah, and Esther--lived between 1800 and 350 BCE. Their combined lives reflect a kabbalistic path of spiritual evolution that is as pertinent to our lives today as it was for the biblical communities in which they lived.

From her studies of the Torah and classical gematria, Zohara Hieronimus shows that each prophetess is linked to a Sefirah on the kabbalistic Tree of Life: from creation (Sarah) through learning correct moral action (Devorah) to the promise of redemption and ultimately resurrection (Esther). Using the stories of their lives and teachings, Hieronimus reveals the relationship of each prophetess to the seven days of the week, the seven sacred species of Israel, the human body, and Jewish holidays and rituals.

This book presents the kabbalistic teachings of these holy women and what they reveal about the initiatory path of individual development and redemption. The seven prophetesses show that every person has a part to play in the repair of the world, and Hieronimus gives a practical set of maps and spiritual guidelines for that journey.

Gevurah • The Waters of Deliverance

As a reward for the righteous women who lived in that
generation, our forefathers were delivered from Egypt.
Sotah, “The Merit of the Righteous Women”

Family: Daughter of Yocheved and Amram; Older sister of Moses and Aaron; Wife of Calev; and Grandmother of Betzalel

Symbols: The miracle of the “traveling” well and the Red Heifer

Shine of Miriam/Gevurah: The Birth of the Messianic Age, Moshiach’s Birth

Miriam’s Song: “Sing to God for he is exalted above the arrogant . . .”

THE SYMBOLISM OF THE PROPHETESS

Miriam as Gevurah
The Sefirah of Gevurah is commonly referred to as the place of judgment and strength. It is the Sefirah of boundary making, epitomized by Miriam’s role among her people as a Prophetess, midwife, and leader. Her capacity for self-refinement through atonement teaches us the deeper spiritual meaning of deliverance and judgment.
After the seed (Chesed) is planted and the light proceeds to the next Sefirah of Gevurah, what is holy gets separated from the unholy. Appreciation and attendance to disciplined behavior arises. This awareness facilitates the process of repentance (Teshuvah) and a return to the “path” of a balanced life.
Gevurah helps one to lead others, to use the Divine Will and soul to control the animal nature and selfish desires. It exercises the influx of Chesed, loving-kindness, with judgment, discriminating where to serve, who to serve, and how to serve.
Gevurah requires that we add mercy to our judgment, Gevurah with Chesed. Acts of loving-kindness balanced by proper discernment describe this Sefirah. In prayer it is applied will to self-refinement, a type of spiritual forbearance or strength necessary in repentance. Gevurah teaches us how to nullify our egos.
Gevurah enables leadership in new ventures that take courage to administer or positions of decision-making as a disciplined visionary, work in justice, grassroots activities, and entrepreneurship. Gevurah facilitates sorting through one’s life, belongings, and feelings--deciding what to keep and what to discard. This life review takes a spiritual form each night before bed, when we look through our day and ask for forgiveness not only of events now but also for what we have done in other incarnations as well.

Miriam as Midwife
We first meet Miriam, also called Puah, at five years of age accompanying her mother, Yocheved (Shifrah), as a midwife attendant. They are the midwives that Pharaoh summoned in Egypt.3 He told them, “when you deliver the Hebrew women, and you see them on the birth stool; if it is a son, you are to kill him, and if it is a daughter, she shall live.”4 Miriam and her mother “feared God and they did not do as the King of Egypt spoke to them, and they caused the boys to live.”5 Pharaoh summoned them again asking why they did not follow his orders to which they replied, because “the Hebrew women are unlike the Egyptian women, for they are experts; before the midwife comes to them, they have given birth.”6 This is the first act of group rebellion in Torah that we learn of, and Miriam is their youngest leader. The Israelite women’s collective rebellion against Pharaoh, even under threat of death, was a commitment to God. “God benefited the midwives and the people increased and became very strong.”7
“R. Avira expounded: As a reward for the righteous women who lived in that generation, our forefathers were delivered from Egypt. When the women went to draw water, the Holy one, blessed be He, prepared for them small fishes in their jugs so that their jugs would come up half full of water and half full of fishes.”8 The righteous are called fish, as were Moses and Joshua, for like fish, their eyes are always open to the light, swimming in the sea of Torah.
It is interesting that Miriam’s early prophecies, according to the oral tradition and her communal position, all revolve around the issue of birth. Beginning at the age of five, she helped her mother deliver the Hebrew babies. Gevurah can represent a severe contraction or what in Kabbalah is called tzimtzum, a Hebrew term referring to God’s act of withdrawing himself in order to create the Universe. Developmentally, just as Sarah was the seed of creation, Miriam represents deliverance, the manifestation of that seed. Sarah was the Mother of Israel, Miriam was Israel’s midwife. Her first prophecy, according to the oral tradition, foretold Moses’s birth. “My Mother is destined,” Miriam said, “to bear a son who will redeem Israel.”16 When Moses was born, “the whole house was filled with light.” Miriam’s father, Amram, “kissed her on her head and said ‘My Daughter, your prophecy has been fulfilled . . .’”17
Healthy childbirth takes place nine months after incubation in the womb. In life, Gevurah gives us the discipline to prepare for the deliverance or manifestation of any idea, task, or belief.

J. Zohara Meyerhoff Hieronimus, D.H.L., author of The Sanctuary of the Divine Presence and Kabbalistic Teachings of the Female Prophets, is an award-winning radio broadcaster, social justice and environmental activist, and passionate organic gardener. She founded the Ruscombe Mansion Community Health Center in Baltimore in 1984 and hosted the daily regional radio program The Zoh Show from 1992 to 2002 and the national radio program Future Talk from 2002 to 2008. She cohosts 21st Century Radio with her husband, Robert Hieronimus, and lives in Owings Mills, Maryland.

“This is indeed a unique book for this dark/bright moment in our human evolution. It reveals the power of prophecy among the women of ancient Israel and is an impeccable portal to the state of sanity that our humanity urgently needs at this perplexed and confused time.”

“A unique book that will nurture your soul and help you achieve inner refinement with the power, love, and femininity of the seven biblical prophetesses.”

– Rabbi Simon Jacobson, author of Toward a Meaningful Life

" . . . a unique book. I mean this quite literally, for I know nothing quite like this work, either in the Cabalistic tradition, or in the wider magical tradition. . . . the scope of history, the humility of the writing, and the spiritual insights offered, carry the work well beyond the usual limits of feminism, and indeed, transforms the feminine into the Universal."

"It is an informative and thought-provoking book that will open the eyes of the reader to new vistas of understanding, of both the prophetesses and of the Torah, in general."