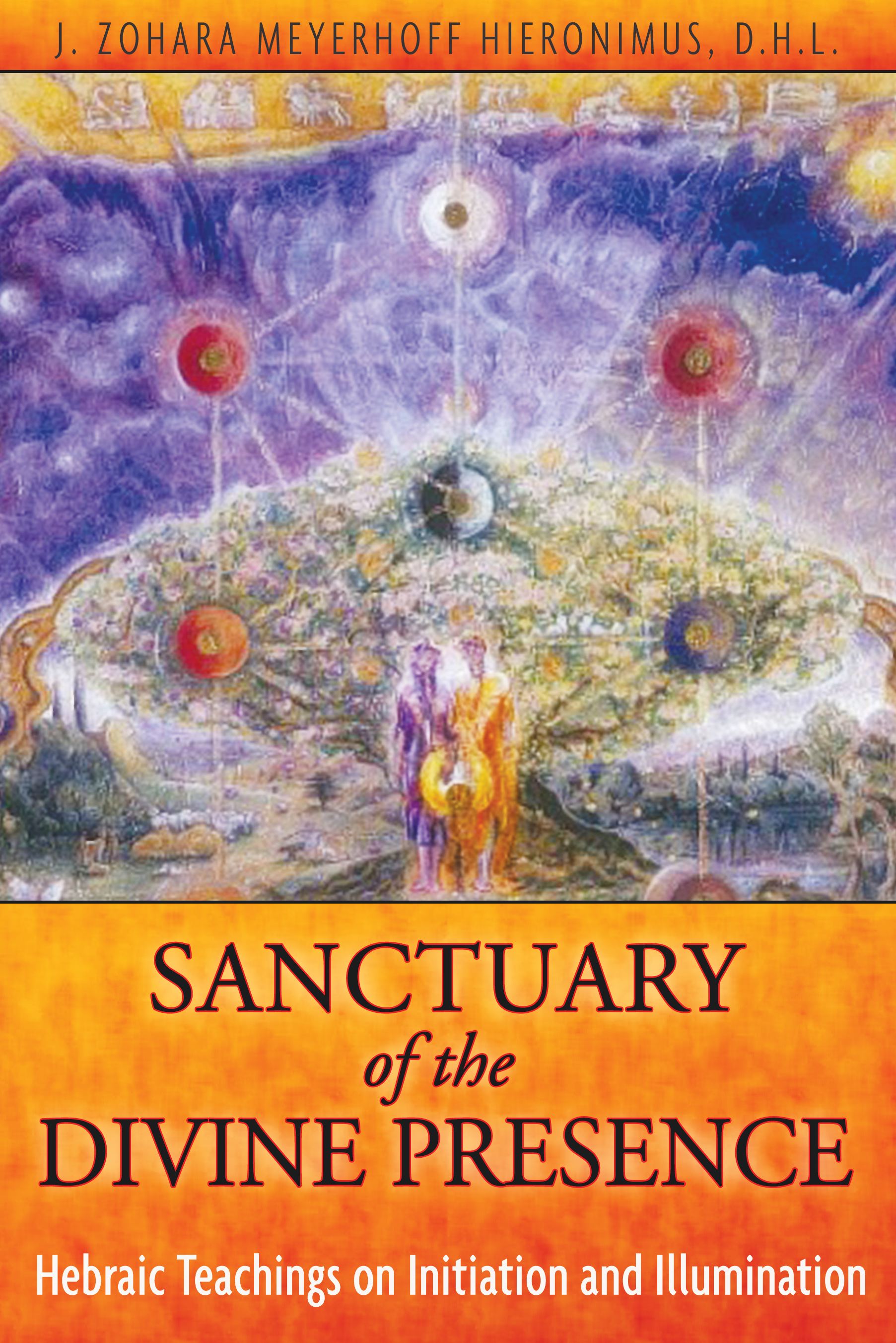 Kabbalistic initiatory teachings for becoming a vessel for illumination, prophecy, and peace by creating an inner dwelling place for God’s divine presence

• Reveals practices for self mastery and revelation based on the holy design of the first Hebrew Sanctuary, the lives of the Hebrew Prophets, and the Tree of Life

• Shows how the Tree of Life’s ten sefirot correspond to the Torah’s prophetic Ten Songs of Creation; to alchemical ritual practices of fire, water, air, and earth; and to specific parts of the body, emotions, and aspects of the soul

Many synagogues and churches, including the First and Second Temples of the Hebrews, follow an archetypal design first used in the Ohel Moed, or Tent of Meeting, and its sacred Tabernacle, which housed the Ark of the Covenant and the Ten Commandments. Drawing from a wealth of sources including the Hebrew Bible, the oral Mishnaic tradition of Judaism, and 16th-century Judaic texts, Zohara Hieronimus explains how, like the Ohel Moed, we are designed to receive and reflect the divine qualities of the Creator.

Exploring the kabbalistic initiatory teachings within the Chassidic tradition of Judaism and the lives and writings of the Hebrew prophets, she reveals how our physical and spiritual worlds are not separate but interdependent, one affecting the other, often in unexpected and sometimes miraculous ways. Examining the ten-part system of Kabbalah’s Tree of Life as reflected in the holy design of the Hebrews’ first Sanctuary, Hieronimus shows how the Tree of Life’s ten sefirot correspond to the Torah’s prophetic Ten Songs of Creation; to alchemical ritual practices of fire, water, air, and earth; and to specific parts of the body, emotions, and aspects of the soul. Starting from Malchut (Kingdom) at the bottom of the Tree of Life and ascending to Keter (Crown) at the top, the author discusses related biblical and scholarly texts and traditional Hebrew practices and teachings that can lead to spiritual enlightenment, illumination, and peace, allowing each of us to become a sanctuary for God’s presence through self-refinement, ritual devotion, and prayer, as practiced since biblical times.

My House shall be called a house of prayer for all people.
Isaiah 56:7


The person begins in Malchut, the bottom of the Tree of Life, “doing” prayer. Preparing for divine awareness, each person contributes to divine revelation on earth.


The Descending Light Becomes the Ascending Light
In Kabbalah, the light of the Creator coming down to us from above is followed by our ascendency, which acts as the returning light, going back up the Tree of Life, from Asiyah (action) to Atzilut (emanation). The Tree of Life is sometimes referred to as a ladder of light that we climb, rung by rung. R. Yehuda Leib Ashlag named his twentieth century masterpiece translation of the Zohar the Sulam, or in Hebrew HaSulam, for “the Ladder.” Using this imagery of a ladder we will explore why prayer is the first rung of our ladder for climbing toward union with God and a life of spiritual and physical refinement.

Prayer (Tefillah)
Tefillah the Hebrew word for “prayer,” comes from the root Pey Lamed Lamed (palael) as in l’hitpael, meaning to judge oneself. Another related root, Tav Fey Lamed (taphal), which means to connect, expresses prayer’s basic function between man and God, the person and their soul. Prayer is how the heart speaks openly. Prayer connects our hearts and our mouths, feeling and intellect. Traditionally it is said that prayer is the service of the heart. Essentially, talking with God in prayer is the language of the soul, the joy of the heart. When we humble ourselves in prayer and stop the noisy chatter of the mind, we can settle down (shachain) into the innermost place in our hearts, in the sanctuary of self where only God and those we give entry to can enter. There we are open to welcome in the presence or Divine Immanence (the Shechinah) of the Creator. Here we experience His Holy Spirit (Ruach HaKodesh).

As the first rung of our path to illumination, prayer is the fundamental practice for a successful spiritual journey. Prayer makes it possible to go through life with greater intuition and keener sensory awareness. King David is said to have written his Psalms under the influence of the Holy Spirit or Ruach HaKodesh, sometimes referred to as the essence that illumines our minds and hearts in prayer. King Solomon wrote his Song of Songs (Shir HaShirim), the next rung of the ladder we will explore, in similar union with the Creator’s Holy Spirit. But why should prayer, as Malchut, be analogous to the Kingdom and the sovereign human who is making a journey to divine consciousness?

In Kabbalah the human is sometimes called the speaking human, distinguishing the power of speech for humankind as the greatest gift bestowed by God. Malchut corresponds in our bodies to our feet, how we walk on earth, and our mouths, how we talk on earth. Speech is an act of creation. A primary lesson then of Malchut is for us to do what we say we are going to do, “to walk our talk,” in modern terminology. Prayer unites the heart, the feeling in the act of praying with the mind, the thoughts and ideas in the prayer, and the mouth through speaking the prayer. Prayer utilizes the creative forces inherent in the act of speaking holy words. Each word, composed of letters, is a vessel for the light to animate. Each time we speak holy words we give, according to Chassidic teachings, the angels attached to them an opportunity to endow us with the Creator’s light. Just as each angel is called to a task, each of us creates a vessel of light when we pray. In this way, prayer is a connector between his legions and us. When we pray to God, we are immersing ourselves in the field of life, surrendering our will to divine unfoldment.

The Connector between Keter (Illumination) and Malchut (Initiation)
The sages teach that the world began with prayer. Until God and Adam communicated there was no fulfillment of Adam’s needs for survival and glorifying God. In fact, God’s created universe stood waiting for humanity’s birth on the sixth day. Only after Adam prayed for rain did the earth come forth with its bounty. Prayer is the first lesson of “service” Adam learned, which we emulate, for until he prayed for rain, it could not rain. In this way we can say Adam, at the highest rung of this journey (Keter), shines on us at our start. Our first lesson in service, initiation in doing, is “to do prayer.”

Until we ask for God’s help, we cannot receive it. We see why the sages have said that the world rests on prayer. One could even say that God created man for the purpose of prayer, making it possible for his creations to talk with him directly. In the same manner in which prophecy is how the Creator speaks to man, prayer is our way of speaking to him. Prayer should hold a primary place in our lives. If prayer reflects the manner in which God created the world, through the spoken word with a heart of love, it shows us the importance of our word, the foundation of the speaking human’s inheritance as God-like creator beings.

J. Zohara Meyerhoff Hieronimus, D.H.L., author of The Sanctuary of the Divine Presence and Kabbalistic Teachings of the Female Prophets, is an award-winning radio broadcaster, social justice and environmental activist, and passionate organic gardener. She founded the Ruscombe Mansion Community Health Center in Baltimore in 1984 and hosted the daily regional radio program The Zoh Show from 1992 to 2002 and the national radio program Future Talk from 2002 to 2008. She cohosts 21st Century Radio with her husband, Robert Hieronimus, and lives in Owings Mills, Maryland.

“To enter the Sanctuary of the Divine Presence is to traverse layer upon layer of ever deepening mystery. This is the temple of hidden secrets where each letter of the Hebrew alphabet is imbued with sacred meaning, where words intertwine and dance with the song of the universe, where story and metaphor render the unspeakable. Herein lies the inner sanctum of wisdom, a blueprint for enlightenment that is indispensable for all who seek to become a dwelling place for the divine.”

– Paul Rademacher, author of A Spiritual Hitchhiker’s Guide to the Universe, and former Executiv

“In her latest book, Zohara Meyerhoff Hieronimus has made a monumental contribution to the literature of the Kabbalah. For centuries – perhaps even for millennia – attempts to demonstrate the spiritual riches in the Kabbalah have been the prerogative of men. Now, thanks to this book, we have an opportunity to catch a glimpse of a different approach to Kabbalah that offers a more feminine vision of our relationship to God through contemplation, song and good deeds. There can be no doubt that the Wisdom of the Kabbalah, and the wisdom within the countless commentaries on this secret tradition, have both been strengthened by the contributions in this most remarkable book.”

– David Ovason, author of The Secrets of Nostradamus and The Secret Architecture of Our Nation’s

“The Sanctuary of the Divine Presence is both traditional and uniquely innovative. The book’s ecumenical tone will appeal to readers of all faiths. Based on fully orthodox Hasidic sources, this work offers a personal and sorely needed feminine vision of Jewish mysticism reaching from Luria to modern Hasidism that will inspire women and men of the current and coming generations. The author’s language combines the theoretical and the embodied, and stimulates thought-provoking insights while offering practical guidance for those who seek to follow the Jewish path of universal compassion and righteousness.”

“So, pick it up off the shelf of your favorite book store and read it. It won’t disappoint you as the author tries her best to help you understand deeper principles of the Hebrew prophets.”

“If you’re a student of Kabbalah it will be a welcome addition to your library. If you’re curious about the ancient roots of modern Jewish/Christian religion, there is also much here to interest you. For those following their inner voice along the path of the hidden wisdom, the text holds many keys to open initiatory doors along your way. Thank you, Ms. Hieronimus. I look forward to your next offering.”

“Both traditional and deeply innovative, Sanctuary of the Divine Presence is a glimpse of a different approach to Kabbalah: a more feminine vision of our relationship to God through contemplation, song, and good deeds. It offers practical guidance for those who seek to follow the Jewish path of universal compassion.”

“Sanctuary of the Divine Presence is a penetrating journey into one of the richest spiritual traditions that exists. If you have ever felt the tug of the transcendent, this book will be both fascinating and rewarding.”

“Sanctuary of the Divine Presence is an extraordinary book that captures the essence and magic of ancient sacred wisdom and offers those invaluable treasures to spiritual seekers and practitioners everywhere... This is a book that inspires us to know our whole lives as Mishkan, as dwelling place for The Divine Mystery.”

“This is a major piece of literature in the Jewish canon…”