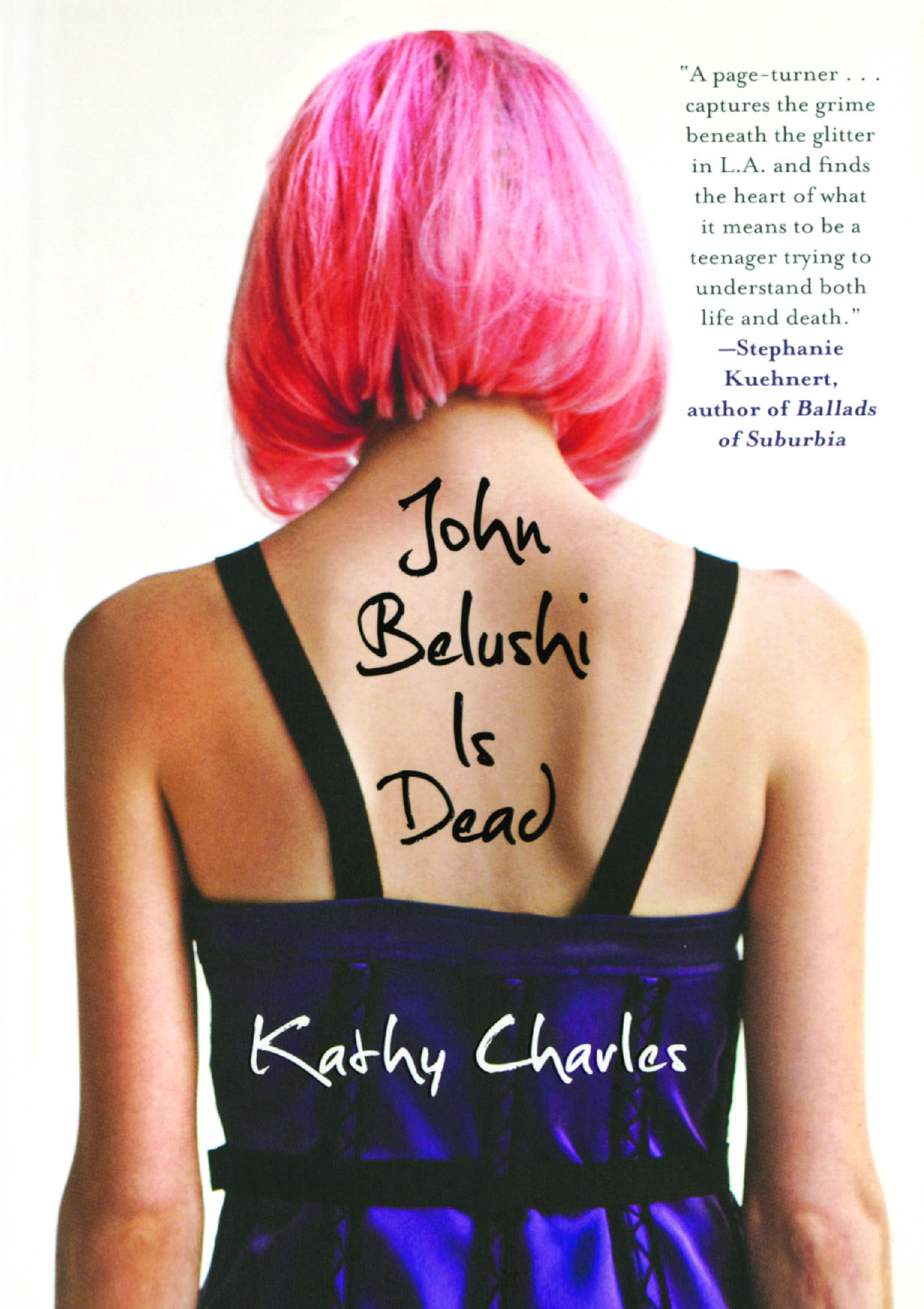 By Kathy Charles
LIST PRICE $19.99
PRICE MAY VARY BY RETAILER

IN THE END WE ALL FADE TO BLACK.

Pink-haired Hilda and oddball loner Benji are not your typical teenagers. Instead of going to parties or hanging out at the mall, they comb the city streets and suburban culs-de-sac of Los Angeles for sites of celebrity murder and suicide. Bound by their interest in the macabre, Hilda and Benji neglect their schoolwork and their social lives in favor of prowling the most notorious crime scenes in Hollywood history and collecting odd mementos of celebrity death.

Hilda and Benji’s morbid pastime takes an unexpected turn when they meet Hank, the elderly, reclusive tenant of a dilapidated Echo Park apartment where a silent movie star once stabbed himself to death with a pair of scissors. Hilda feels a strange connection with Hank and comes to care deeply for her paranoid new friend as they watch old movies together and chat the sweltering afternoons away. But when Hank’s downstairs neighbor Jake, a handsome screenwriter, inserts himself into the equation and begins to hint at Hank’s terrible secrets, Hilda must decide what it is she’s come to Echo Park searching for . . . and whether her fascination with death is worth missing out on life.

WE HUNG OVER THE fence at the Ambassador Hotel, watching the demolition. Benji stood beside me taking photos with his digital camera, his mouth open in disbelief. He was determined to document every moment. As the bulldozers tore into the side of the hotel, the sound of crushing mortar made me feel sick. The Ambassador had a long, star-filled history. To us the building was a holy shrine, and watching its destruction was like watching a death.

For the past year we had attended protest marches and signed online petitions. During that time the hotel had been used as a movie set and a cheap location for sci-fi and comic book conventions. But finally the decision had been made. The Ambassador had no future, and the demolition was to go ahead. Los Angeles is a town that exorcises its demons—cursed properties are seized and razed.

Benji and I revelled in the celebrity history of the Ambassador. In the golden days of Hollywood, the Oscars were held there. Marilyn Monroe lounged by the pool. In 1968, the allure of the Ambassador was tarnished forever when Senator Robert F. Kennedy delivered a heartfelt victory speech in the ballroom after winning the California primary, only to be gunned down as he tried to make his exit through the hotel pantry. Some people thought the CIA was in on it, but most believed that RFK was assassinated by a Palestinian immigrant with a beef against the Kennedys, just another run-of-the-mill nut job in a town full of them. I preferred the theory that the Palestinian was just a patsy, that he’d been hypnotized and ordered to kill the senator, like something out of The Manchurian Candidate. Benji said he had a piece of the floor from directly beneath RFK’s head. He bought it off eBay from a seller who claimed to be one of the workers hired to tear the building down. Benji said the dark stain on the corner that looked like barbecue sauce was actually Kennedy’s blood.

Our mission for the day was to remove something from the demolition site, this time with our own two hands. Benji had dressed in combat fatigues, convinced it would help him blend into the scenery. A couple of ex-cops in black T-shirts patrolled the perimeter, German shepherds on short leads trailing beside them. We looked for ways to get through the fence undetected but couldn’t maneuver around the guards. After we’d stood around for an hour, hands in our pockets and staring through the chicken wire, one of the guards came over. He was wearing aviator sunglasses and had a gun in his holster.

“Can I help you kids with something?” he asked.

“Good morning, officer,” Benji said politely, pointing at the crumbled ruins of the Ambassador. “Any chance we could come in and watch history unfold up close?”

The guard shook his head. “Private property,” he said, tipping his head at a sign that read WARNING—DEATH. “Dangerous, too. Why, a piece of rock could come flying off one of those bulldozers and hit you—bam!—square in the eye.” He threaded his thumbs through his belt, chewed his gum with the gusto of a cowboy, and stared into the sun like the sheriff of Deadwood. It was then I knew we would get what we needed.

“Can I make you a proposition?” Benji suggested. He removed a black, studded wallet from his back pocket, snapped it open, and pulled out a ten-dollar bill. The wallet rattled on its chain. Benji lived to negotiate.

“What do you mean, proposition?” the guard asked, adjusting his cap.

Benji handed him the bill: clean, crisp, and freshly minted.

The guard paused for a moment, then took the bill and examined it. He held it to the sun as if the light could confirm it was real. “What the hell is this all about?” he asked, looking around to make sure no one had seen the exchange.

A crane crashed through the ceiling of the hotel and a dust cloud made its way across the lot, shrouding everyone in dirt. Benji coughed and brushed dirt from his clothes. “We want some bricks,” he said.

The guard stared at him. “Bricks?”

“Flooring, too, if you can find any. But bricks would be a good start.”

The guard gazed out across the site, incredulous. His boss was sitting in the watch house taking a nap, feet hanging out the window.

“Make it twenty,” he said, turning back and licking his lips.

Benji had been expecting this, too. He took another ten from his wallet and handed it over. He always carried many denominations, always started small. Once people knew what we were after they would jack up the price—capitalism at its finest.

“All right, then,” the guard said, and grinned. He folded the bills and put them in his top pocket, then set off at a jog across the lot. Benji let out a high-pitched whistle and the guard turned around.

“Not that way,” Benji yelled over the bulldozers and cranes. “That way.”

He pointed toward where the ballroom had been, and the guard changed direction. A minute later he was running back, two whole bricks in his hands. He carried them against his chest, puffing and wheezing all the way. He dropped the bricks on the ground and started to cough.

“Careful,” Benji complained. “I paid for those.”

Just like you paid for the one off eBay, I thought. Only this time he could authenticate it.

The guard spat on the ground, then composed himself. It had obviously been some time since he’d been chasing criminals around the streets of LA.

“What the hell do you kids want those for, anyway?” he asked. “What’s so special about a couple of bricks?”

Benji picked up the bricks and cradled one in each hand. He held the rough, red surface against his face and breathed in, then cast a victorious glance in my direction.

“Feel this,” he said, handing the brick to the guard, who gave me a quizzical look.

He took the brick, sniffed it, weighed it in his hand, then handed it back to Benji. “It’s a brick,” he concluded.

Benji shook his head. “It’s not just a brick. This piece of building, this element, is a living, breathing organism. This brick has witnessed some of the most amazing events in American history. It was there when Gone with the Wind received the Oscar for Best Picture. It watched Marilyn Monroe being photographed by the swimming pool. Perhaps it made up part of the room where Jean Harlow stayed, or Howard Hughes, or Nixon. Listen.”

He held the brick up to his ear as if it were a shell. The air was suddenly still and the crash of demolition momentarily ceased.

“It’s telling us its secrets,” Benji said. “These pieces of building, they are part of history. They talk to us. They tell us stories. Robert Kennedy might have been our president if he hadn’t died here, on this very site. And what do we do? We tear the place down, as if what happened here doesn’t matter one bit. We just tear it down and forget it was ever there.”

There was an explosion and rubble rained down. The guard jumped and spun around as if he’d seen a ghost. Benji took a plastic bag from his pocket. I took some newspaper from my backpack and handed it to him. He wrapped the bricks in the paper, lovingly folded down the edges, and placed them in the bag. The guard scratched his head.

“You kids are crazy,” he said, and started to walk away.

Benji looked at me and smiled, pleased with himself.

“Did you have to freak that guy out?” I asked.

We walked back to his car. He put the bricks on the backseat.

“You wanna put seat belts on them, too?” I asked. 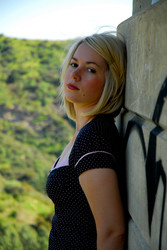 By Kathy Charles
LIST PRICE $19.99
PRICE MAY VARY BY RETAILER