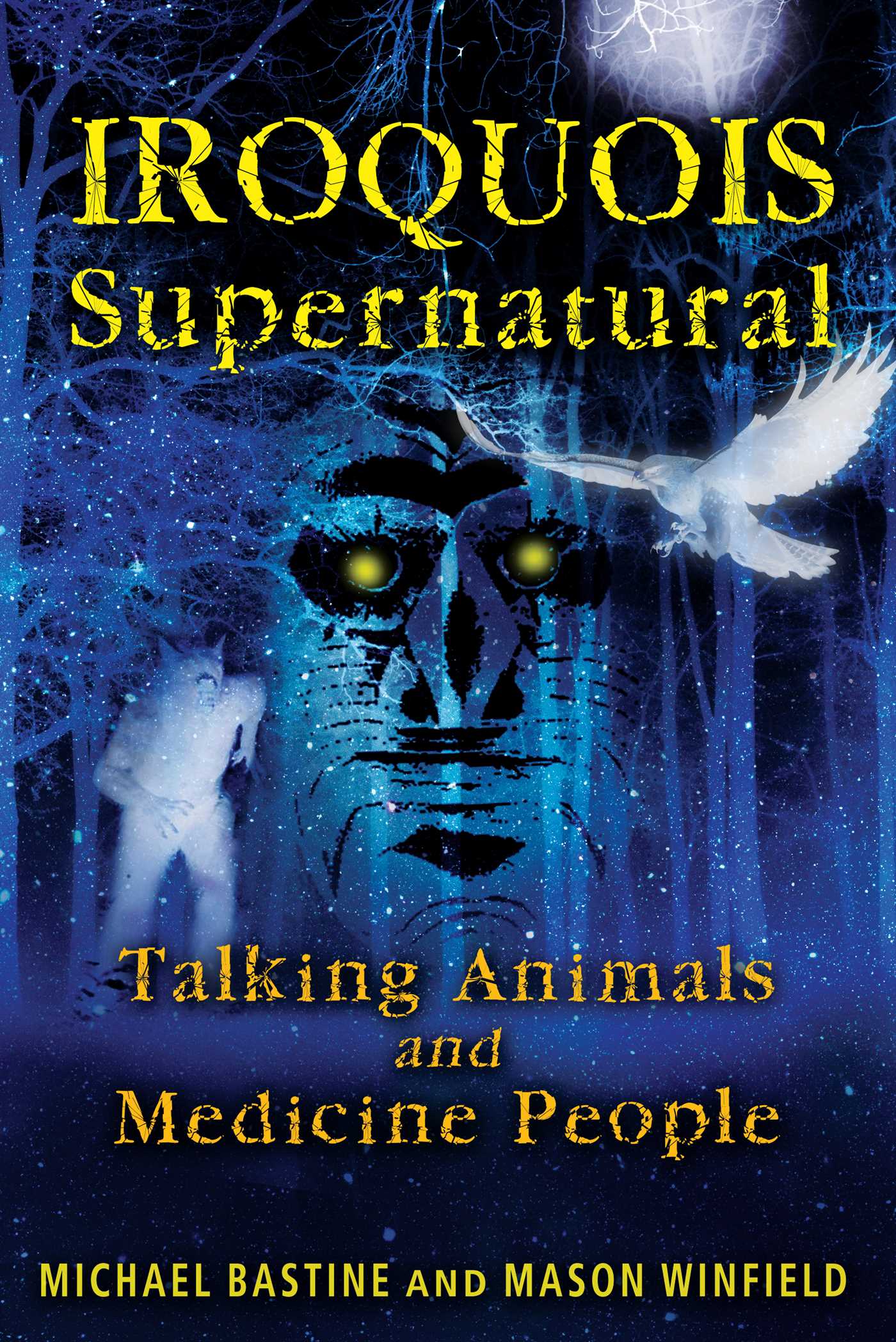 With a rich history reaching back more than one thousand years, the six nations of the Iroquois Confederacy--the Mohawk, the Oneida, the Onondaga, the Cayuga, the Seneca, and the Tuscarora--are considered to be the most avid storytellers on earth with a collection of tales so vast it would dwarf those of any other society. Covering nearly the whole of New York State from the Hudson and Mohawk River Valleys westward across the Finger Lakes region to Niagara Falls and Salamanca, this mystical culture’s supernatural tradition is the psychic bedrock of the Northeast, yet their treasury of tales and beliefs is largely unknown and their most powerful sacred sites unrecognized.

Assembling the lore and beliefs of this guarded spiritual legacy, Michael Bastine and Mason Winfield share the stories they have collected of both historic and contemporary encounters with beings and places of Iroquois legend: shapeshifting witches, strange forest creatures, ethereal lights, vampire zombies, cursed areas, dark magicians, talking animals, enchanted masks, and haunted hills, roads, and battlefields as well as accounts of miraculous healings by medicine people such as Mad Bear and Ted Williams. Grounding their tales with a history of the Haundenosaunee, the People of the Long House, the authors show how the supernatural beings, places, and customs of the Iroquois live on in contemporary paranormal experience, still surfacing as startling and sometimes inspiring reports of otherworldly creatures, haunted sites, after-death messages, and mystical visions. Providing a link with America’s oldest spiritual roots, these stories help us more deeply know the nature and super-nature around us as well as offer spiritual insights for those who can no longer hear the chants of their own ancestors.

The lights have been with us since the beginning of time, and they will be with us until the end of time.
DuWayne Leslie Bowen

The strange, nocturnal lights known in Seneca as ga’hai--witch lights--are fixtures of Iroquois storytelling. Sometimes the lights appear as pale, slow-moving, head-size spheres that, but for their variable hues, could be the lanterns of distant hikers. Sometimes these luminous balls swarm, drifting across the landscape like pastel balloons. Sometimes they seem atmospheric and even site-bound, rising like tallow marsh gas from invisible vents. Other witchy lights are dynamic, fiery, and even self-directed, hurtling through the treetops like low-level comets and coming to rest in dire places like graveyards, battlefields, or swamps.

In some tales these flying lights are flares leading a witch or wizard to victims or targets. They might be static markers indicating the hiding places of charms or other treasures. If one springs to light by the course of your evening stroll, watch your step: its controller is near.

The lights themselves are virtual characters in other tales, going through their impish, seemingly intelligent maneuvers to the amazement of human onlookers. Ones like these are more likely to vary in size, to flock in numbers, to fill a grove or graveyard, and dart or hover like hummingbirds. The presumption is that some supernatural being that inhabits or causes them might be out for a little fun with us.

In the most developed stories, witch lights are regarded as alternate forms that witches change in to in order to travel. If you are near a witch light as it passes, you might see the faint image of a human face inside the sphere. It’s probably the countenance of a power person, living or dead, presumably the witch or wizard directing it. It’s best if it does not notice you noticing it.

Though unassailable in this form, called the witch’s torch, witches come back to their natural bodies sooner or later. If you follow one of these lights to its destination, you may see it snap out of existence. In its place will be the human you now know to be a witch.

Whites in the Northeast have been reporting these lights for centuries, offering no explanations for them in local folklore. The ga’hai are still seen with frequency in upstate New York, and by all types of people, especially in traditionally haunted sites and areas. In contemporary accounts they seem to be simple paranormal phenomena, almost like spontaneous and unintelligent offshoots of the territory around them. Maybe this is what they really are. Though some fit the profile of the folkloric witch lights, others are surely will-o’-the-wisps or swamp gas. Their high-density sites are often on reservations, prehistoric ruins, battlefields, or other “places of ancient sanctity” (as John Michell calls them) to Native American societies.

The Gold of Ga’hai Hill

Allegany Seneca storyteller George Heron (b. 1919) heard most of his tales from an uncle who was born before the Civil War. The interchange included many legends about the ga’hai on Bay State Hill across the river from Cold Spring, about four miles southeast of Red House Lake. The lights that Heron’s uncle described floated about as high as a human knee, “like a car headlight but with no explanation.”

Three Union deserters were on their way to Canada carrying large bags of money. They made their way through the Allegany Reservation, and while there they recruited three young Seneca to round up food and civilian clothing and to give them directions to Lake Erie. In payment the soldiers offered each Seneca a full grab into a bag of gold coins, a fistful that would have been the sum of a lifetime. “But don’t go spending it right away,” they warned as they left. “It’s hot money.”

The joy of the three Seneca was mixed. Their first worry was losing their treasure. Their second was being caught with it. The oldest had a plan: He’d bury it on Ga’Hai Hill. He’d fill his pipe at the bottom of the trail, start smoking, and walk with the gold to the top. When the tobacco ran out he’d bury it, and that would be the way to find it again. The three would wait a few years to start spending it. This made sense. “Nobody will poke around for it up there,” they reasoned, because of the dread of the witch lights.

The oldest Seneca did as he had planned, found a tree special enough to remember, and dug. Over the winter he caught an illness and died before he could show his friends to the spot. All anyone knew was that the gold was somewhere on the trail up Ga’Hai Hill, about as far as a single pipeful would last.

For years the two surviving friends prowled Ga’Hai Hill, their thirst for gold evidently greater than their fear of witches or lights. After their deaths one of the men’s sons took up the search. Storyteller Duce Bowen tells us this is thought to be a true tale in Salamanca. Even today, when the witch lights are out on the hill, people wonder if the souls of the treasure hunters might be among them, still looking for their gold.
Michael Bastine

Mason Winfield is a supernatural historian and founder of Haunted History Ghost Walks, Inc. The author of 9 books, including Supernatural Saratoga, he lives in East Aurora, New York.

“Iroquois Supernatural the perfect vehicle to transport readers to this shaded and forgotten land to study its treasures of wisdom.”

“...this book strikes a pleasant mix between scholarly research and earnest fascination with these stories of super natural happenings in the New York state area. It’s clear that all the research done was a labor of love on the part of both authors...Iroquois Supernatural is a solid introduction to the lore with cool campfire stories mixed in, intelligent but not pedantic.”