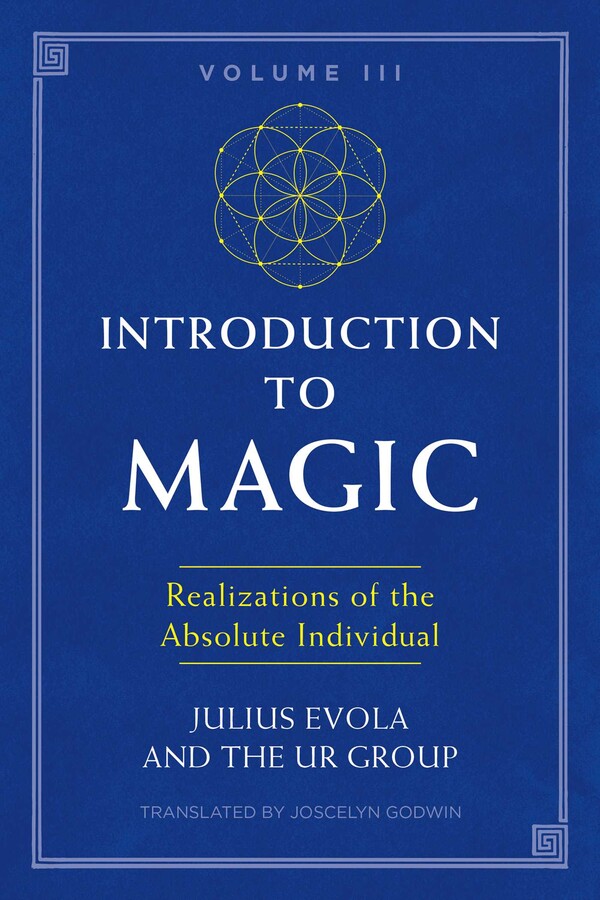 Realizations of the Absolute Individual

By Julius Evola and The UR Group
Translated by Joscelyn Godwin
Published by Inner Traditions
Distributed by Simon & Schuster
LIST PRICE $20.99
PRICE MAY VARY BY RETAILER

• Explores esoteric practices for individual development, handed down from a primordial tradition and discernable in alchemy, Hermetism, religious doctrines, Tantra, Taoism, Buddhism, Vedanta, and the pagan mysteries of the West

• Reveals the ultimate magical goal of the “Absolute Individual,” the immortal and divine potential that requires rare gifts and extraordinary efforts for its realization

This volume, the third in the series, complements the first two, yet they are not strictly sequential, and their contents can be read in any order. Volume III, more than the others, bears the personal stamp of Julius Evola. In its pages you’ll discover that the “magic” of the UR Group has nothing to do with sorcery or superstition. It was their term for an active and affirmative attitude toward individual development handed down from a “primordial tradition” and discernible in alchemy, Hermetism, esoteric religious doctrines, indigenous practices, Tantra, Taoism, Buddhism, Vedanta, and the pagan mysteries of the West. Its goal was the “Absolute Individual,” the immortal and divine potential that requires rare gifts and extraordinary efforts for its realization.

However, there is incalculable value in this volume even for the less heroic. By studying the practices and realizations within, the reader will be liberated from conventional dogmas--religious, political, scientific, and psychological--and see with the clearer eye of realization.

Now that the task the Ur Group set itself in--organizing this collection of essays--is virtually done, it is time to say a few words of farewell to those who have followed us up to now.

We have been addressing the few whom a higher vocation renders unsatisfied by the values and accomplishments of ordinary human life, in order to give them a sense of the paths, the truths, and the horizons of what is called the initiatic or the secret tradition. We have precisely drawn the frontier that separates these disciplines from the “spiritualist” and occultist forms, sources of mystification and often run by charlatans, which currently enjoy an epidemic of diffusion among a mindless and dilettantish public. We have explained what should be thought of psychoanalysis and metapsychology, recent concotions that have made such an impression on provincials of the spirit. At the same time we have denounced all confusion of initiatic reality with the fields of competence of profane science, and with the world of mysticism, morality, and religion. Consequently our main concern has been to give out a body of teachings relating above all to practice and to realization, corroborating them with accounts of real, lived experiences, as well as traditional texts and references, varied but always converging in a single direction. Compared to other attitudes even within the initiatic domain, this is a direction that gives special importance to concepts of freedom, of power, and of spiritual virility.

In the three volumes of these essays we have communicated whatever we could, following the task mentioned. We have not set up any “occult” scenery, and have spoken with sufficient clarity not to deceive anyone with sensational promises or with the mysterious ceremonial that seems obligatory to many who are hawking the by-products of esotericism and yoga today. As for what we have offered, each will use it as he thinks best, and according to his qualification and interest. Enough reference points have been given to the discerning reader for going a good distance on his own, in study or in practice; and with a certain variety, intended to suit individual inclinations. If anyone wants to know more, it would be difficult to find it in any written exposition.

In the practical domain, we have often mentioned that the conditions of the present epoch, whether collective or for the individual, are more unfavorable than ever for a transcendent development of the I, and that each one is left more or less to himself, at least for a good way on the path. He will soon be discouraged if not endowed with a calm firmness and a subtle energy; if he seeks confirmations and results that are direct and tangible; or if, insufficiently serious about his vocation, he creates illusions. On the other hand it is certain that one who has had the sense of transcendent reality, even if only for a glimpse, can never efface it. “The Dragon’s bite never scars over.” Something will have taken form in his soul that will subsist, even without his being distinctly conscious of it and despite all upsets, from which he will always be able to draw strength to wait, to persist, to resume, to dare.

Another source of perseverance can be the idea that, however vast the distance, one is known and awaited by those on the other shore. Just as some sounds from the valley travel with strange clarity to the mountain peaks, every right intention is perceived. From the second manifesto of the Rosicrucians comes the idea that “thoughts, joined to the real will of the reader, are capable of making us known to him and him to us.” The same text also speaks of belonging to an initiatic chain, which has nothing to do with joining visible and named organizations or “societies”; it is not granted by ceremonies, but in fact, even without knowing it, when the right will is present and one is on the way of right realization.

Another point also needs emphasis under today’s conditions, when sects are proliferating and a herd instinct is asserting itself everywhere. One should mistrust everything that has any exterior character, and all who pretend to be able to provide what only an exceptional internal action can achieve, thanks to the fire of consciousness and of concentration. In all cases you should be sincere--to the point of being pitiless--in examining what you really want: because otherwise, if there is an inner untruthfulness, right action is not possible. But if you are truly aiming at initiatic-magical realization, remember unfeignedly the ancient saying: the way to it is like “walking on the edge of a sword.” That is why it may be better to give up an enterprise that exceeds your own strength than to play with vain substitutes.

At the end of our task, it has been necessary to repeat all this frankly. It is not our business to try to satisfy anyone’s weakness or illusions. We have not been talking to infants, but to mature and serious people. Now that we have cleared the ground sufficiently and, we hope, contributed a necessary work of clarification, it remains for each one, once he has taken due measure of himself, to make appropriate use of what has been expounded up to now. And may such use be auspicious to him: that is our best wish--from the “Gruppo di Ur.”
Julius Evola

A controversial philosopher and critic of modern Western civilization, Julius Evola (1898-1974) wrote widely on Eastern religions, alchemy, sexuality, politics, and mythology. Inner Traditions has published his Eros and the Mysteries of Love: The Metaphysics of Sex, The Yoga of Power, The Hermetic Tradition, Revolt Against the Modern World, The Mystery of the Grail and Ride The Tiger.

“Those who look to Julius Evola’s work for guidance have often wondered what practices Evola himself used to get in contact with Tradition. The answer lies in Introduction to Magic, which represents the records left behind by the UR Group, the mysterious occult order that was the medium through which Evola first experienced the reality of Tradition and grasped its essence. Many of the themes and concepts which were to recur in Evola’s later work are already present in these documents. The great importance Evola attached to these volumes is attested by the belief of Evola’s biographer that the original manuscripts were the only belongings he took with him when he was forced to flee Rome in 1944. The fact that this work is finally available in its entirety to Anglophone readers, masterfully translated by Joscelyn Godwin, is therefore a great service to genuine spiritual seekers everywhere.”

“I am impressed by this fine translation of some of my old mentor Julius Evola’s works. I find that ‘Aristocracy and the Initiatic Ideal’ conveys very well the baron’s own beliefs and sentiments as to what it means today to be a true aristocrat among the ruins. Exceedingly insightful comments, as one would indeed expect. A truly excellent publication.”

Realizations of the Absolute Individual

By Julius Evola and The UR Group
Translated by Joscelyn Godwin
Published by Inner Traditions
Distributed by Simon & Schuster
LIST PRICE $20.99
PRICE MAY VARY BY RETAILER