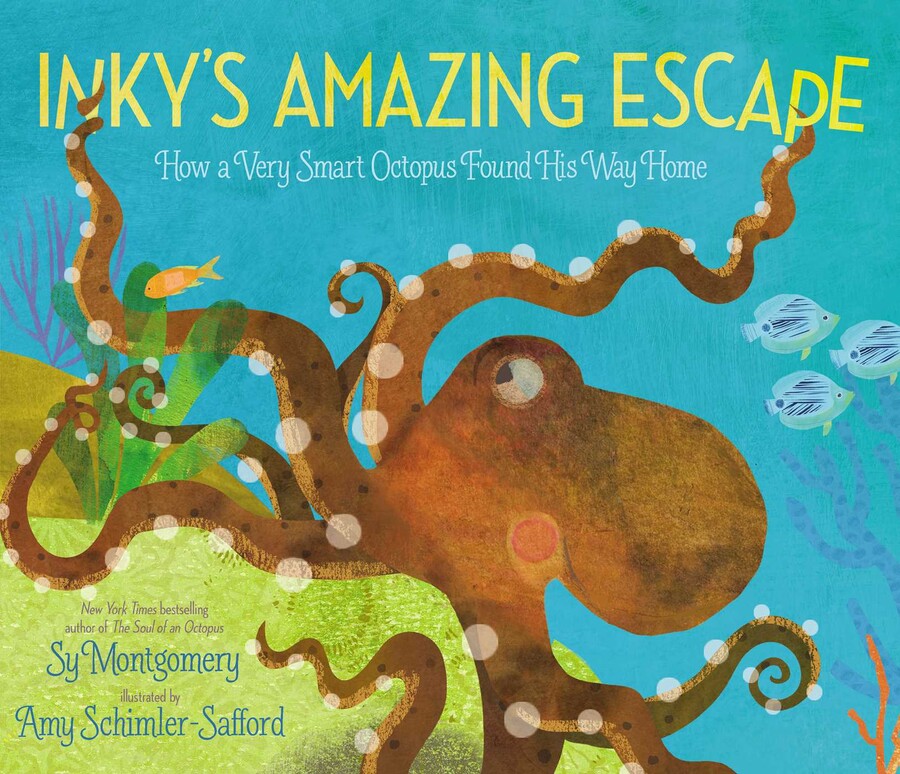 How a Very Smart Octopus Found His Way Home

“The mixed-media illustrations make good use of dynamic spreads, color, and texture—perfect for a book on a master of camouflage. Montgomery seamlessly incorporates interesting facts about octopuses into the narrative.” —Booklist

Learn all about Inky the Octopus, an international sensation known for escaping from the New Zealand aquarium in April 2016, in this fascinating picture book from National Book Award nominee and octopus expert Sy Montgomery.

Inky had been at the New Zealand aquarium since 2014 after being taken in by a fisherman who found him at sea. Inky had been getting used to his new environment, but the staff quickly figured out that he had to be kept amused or he would get bored. Then one night in 2016 Inky, about the size of a basketball, decided he’d had enough. He slithered eight feet across the floor and down a drainpipe more than 160 feet long to his home in the sea.

Acclaimed author Sy Montogmery reminds readers that Inky didn’t escape—but instead, like the curious animal he is, wanted to explore the rest of the vast ocean he called his home. 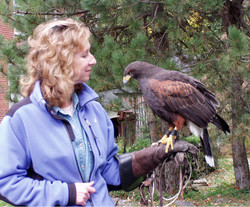 Sy Montgomery is a naturalist, documentary scriptwriter, and author of twenty acclaimed books of nonfiction for adults and children, including the National Book Award finalist The Soul of an Octopus and the memoir The Good Good Pig, a New York Times bestseller. The recipient of numerous honors, including lifetime achievement awards from the Humane Society and the New England Booksellers Association, she lives in New Hampshire with her husband, border collie, and flock of chickens.

Amy Schimler-Safford started her career in textile and surface design. She now illustrates children’s books and lives on a lake in Georgia with her family and lots of country critters, all of whom provide Amy with a constant source of amusement and inspiration.

Acclaimed nature writer Montgomery has written about octopuses for adults and middle-graders (The Octopus Scientists, 2015). Now she brings the curious cephalopod to the pre- and primary-school sets. Inky achieved worldwide fame after escaping from New Zealand’s National Aquarium via a floor drain. Montgomery tells Inky’s story by imagining his life as a young hatchling in the Pacific Ocean, noting the food he would eat, how he’d use his suckers (to grip and taste!), and his driving desire to explore. Drama enters in the form of a moray eel, which injures Inky, who then hides in a lobster trap. Luckily, the fisherman who finds Inky takes him to the aquarium, and the rest is history. The mixed-media illustrations make good use of dynamic spreads, color, and texture—perfect for a book on a master of camouflage. Montgomery seamlessly incorporates interesting facts about octopuses into the narrative, such as octopuses’ tendency to change color to match their mood. An author’s note provides more information on Inky, observations about octopuses in captivity, and fun facts. — Julia Smith

Montgomery (2015’s The Octopus Scientists and The Soul of an Octopus) has channeled her considerable octopus knowledge into a narrative nonfiction picture book based on an incident at a New Zealand aquarium. After a lobsterman took a young injured octopus to a nearby aquarium, it healed and grew, eventually finding its way back to the Pacific Ocean. Montgomery uses age-appropriate language to convey an impressive amount of information. The text is accessible and makes use of relatable comparisons to everyday items such as grains of rice and soccer balls. No background knowledge of octopuses is assumed, but two terms, beak and jet are used without explanation; readers may be able to infer their meanings from the text. Inky is assigned thoughts and feelings, although as the text explains, changes in the octopus’s skin color can indicate emotions. Schimler-Safford’s engaging mixed-media collages in realistic colors, some reminiscent of Eric Carle, fill the page and beautifully complement the narrative—readers will want to closely inspect all the details. Back matter includes an endnote describing other octopus escapes, “Eight Fun Octopus Facts” (which are a simplified version of the “Octet of Octo Facts” in The Octopus Scientists), a short bibliography, and links to news stories about Inky’s escape. VERDICT Montgomery’s expertise and the gorgeous illustrations make this a fine purchase for libraries serving early elementary students.–Judy Poyer, Anne Arundel County Public Library, MD

"In 2016, an octopus named Inky made global news by escaping from New Zealand’s National Aquarium. This story recounts that event and imagines Inky’s pre- and postaquarium life in the wild. “Each octopus set out on a journey alone. They’re born ready to explore,” Montgomery (How to Be a Good Creature) writes in her direct, deeply respectful prose. At birth, Inky is “the size of a grain of rice,” and his considerable intellect and ultrapliable body stand him in good stead as he grows until, baseball-size and bitten, he’s scooped up in a fisherman’s net and taken to an aquarium. Life in captivity means crab snacks, toys (he plays with Lego blocks and Mr. Potato Head), and tickles from his trainer. But his innate curiosity wins out, and one night, Inky slips out of his tank and slides into a floor drain that leads back to the ocean. Textured mixed-media collages by Schimler-Safford (Hidden City) playfully evoke underwater scenes with brilliant hues. Inky regards the world with eager, lightly anthropomorphized googly eyes, but he’s never over-romanticized and emerges as a wily, winning personality. A final spread offers more octopus facts for eager learners." -- Publishers Weekly

Inky, an octopus, began his life in the Pacific Ocean but was caught in a lobster trap and transferred to a New Zealand aquarium Life there is seemingly blissful, filled with playful activities, friendships with aquarium keepers, and admiring onlookers. Yet when presented with a loose tank cover, Inky takes the opportunity to squeeze himself through the ga, into a drainpipe on the floor, and then  out into the Pacific, where he (presumably) lives today. Montgomery (who also wrote The Octopus Scientists, rev. 7/15, for older readers, for the Scientists in the Field series) weaves detailed science into Inky’s life story, helpingreaders to understand octopus birth and growth, the dangers faced in daily life in the open ocean, and the curiosity and emotions expressed by octopuses. Schimler-Safford’s brightly colored illustrations effectively capture the beautiful blues of Inky’s aquatic environments, show his sinuous flexibility, and hint at his intelligence. A detailed endnote provides additional information on the real Inky as well as several other octopus “escapes”; “8 Fun Octopus Facts” outline some of the remarkable abilities of the species. A brief list of suggested reading is also appended.

How a Very Smart Octopus Found His Way Home