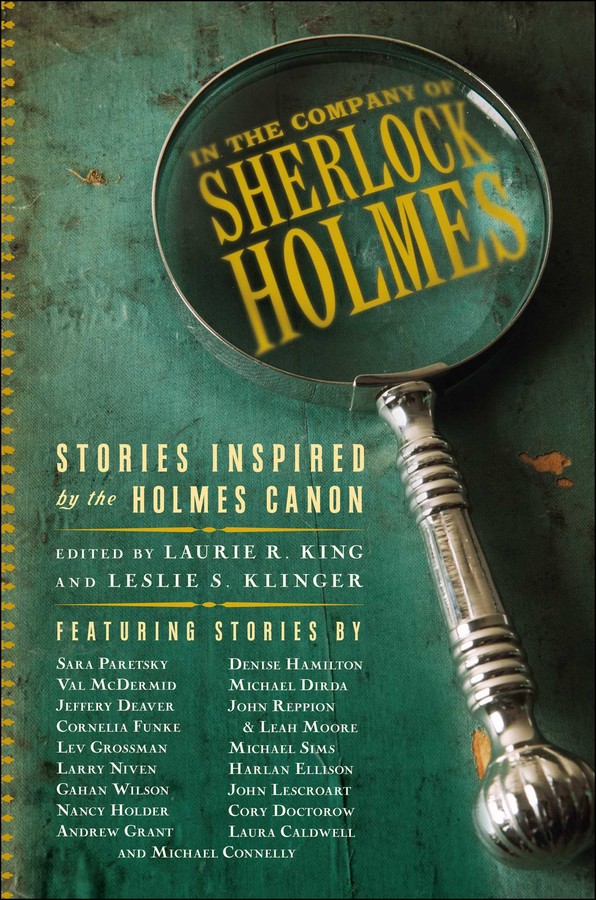 In the Company of Sherlock Holmes

Stories Inspired by the Holmes Canon

In the follow-up to the nationally bestselling A Study in Sherlock, a stunning new volume of original stories from award-winning Sherlockians Laurie R. King and Leslie S. Klinger.

The Sherlock Holmes stories by Sir Arthur Conan Doyle were recently voted as the top mystery series of all time, and they have enthralled generations of readers—and writers!

Now, Laurie R. King, author of the New York Times-bestselling Mary Russell series (in which Holmes plays a co-starring role), and Leslie S. Klinger, editor of the New Annotated Sherlock Holmes, have assembled a stellar group of contemporary authors from a variety of genres and asked them to create new stories inspired by that canon. Readers will find Holmes in times and places previously unimagined, as well as characters who have themselves been affected by the tales of Sherlock Holmes.

"Devotees of the greatest of all fictional detectives will welcome this anthology from King and Klinger, who have assembled a murderers' row of talent, including bestselling authors not usually associated with Holmes and Watson."

"The tales cover a wide variety of interpretations, from comedic to dark, and range from straight pastiches in Watson's voice to modern settings with Holmesian investigators. Surprising and twisty results."

"Original and intriguing. Fans of Sherlock Holmes will find plenty to appreciate in this collection."

"Delightful. The tales, all exceedingly clever, are sometimes in classic Holmesian style and time period; others make only passing reference to the great detective; and some have ingenious twists."

"Great fun for anyone who loves crime fiction. The collection is diverting, delightful, and best taken with a cup of hot tea."

"Sara Paretsky contributes an excellent feminist pastiche, Gahan Wilson some amusing cartoons, Andrew Grant a whimsical social-media update of The Hound of the Baskervilles, Jeffery Deaver a well-constructed tale about a man who idolizes not Holmes but Moriarty. A sharp, affectionate, light-footed collection."

"Satisfy your Sherlock cravings with these superb stories."

"Boasts all-new stories, some featuring Holmes himself, others inspired by him, by such ace contemporary writers as Michael Connelly, Sara Paretsky and Jeffery Deaver."

"This companion volume to A Study in Sherlock features 16 writers and cartoonists whose imagination has been stirred by the great detective. The writers obviously had a lot of fun with these imaginative and effective pieces, and Holmes and his companions live again."

"An eclectic but accomplished group of novelists, primarily mystery and crime writers, take some intriguingly different looks at Holmes’ legacy. The legacy of Sir Arthur Conan Doyle’s work and his most famous character is on rich display here, and In the Company of Sherlock Holmes should be on the reading list of any Holmes fan."

"There are some gems. This book was conceived in fun, written in fun and edited in fun. It should be read in that spirit. For 127 years since his first case and for 84 years since the death of his creator, Sherlock Holmes is still entertaining us."

"The game is afoot for an eclectic collection of writers, including Sara Paretsky, Harlan Ellison, Denise Hamilton and Nancy Holder."

"As brilliant as it is entertaining."

In the Company of Sherlock Holmes

Stories Inspired by the Holmes Canon