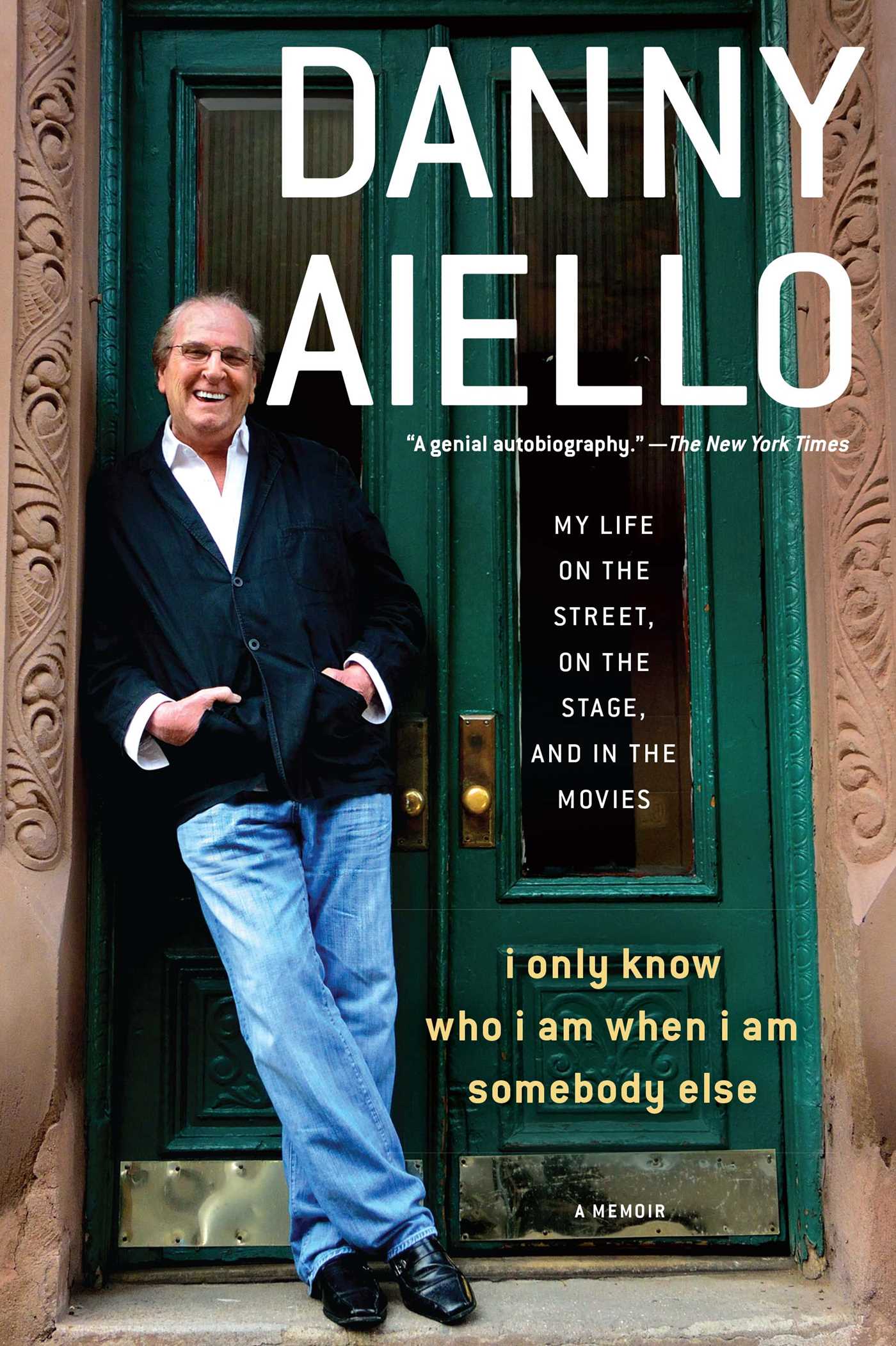 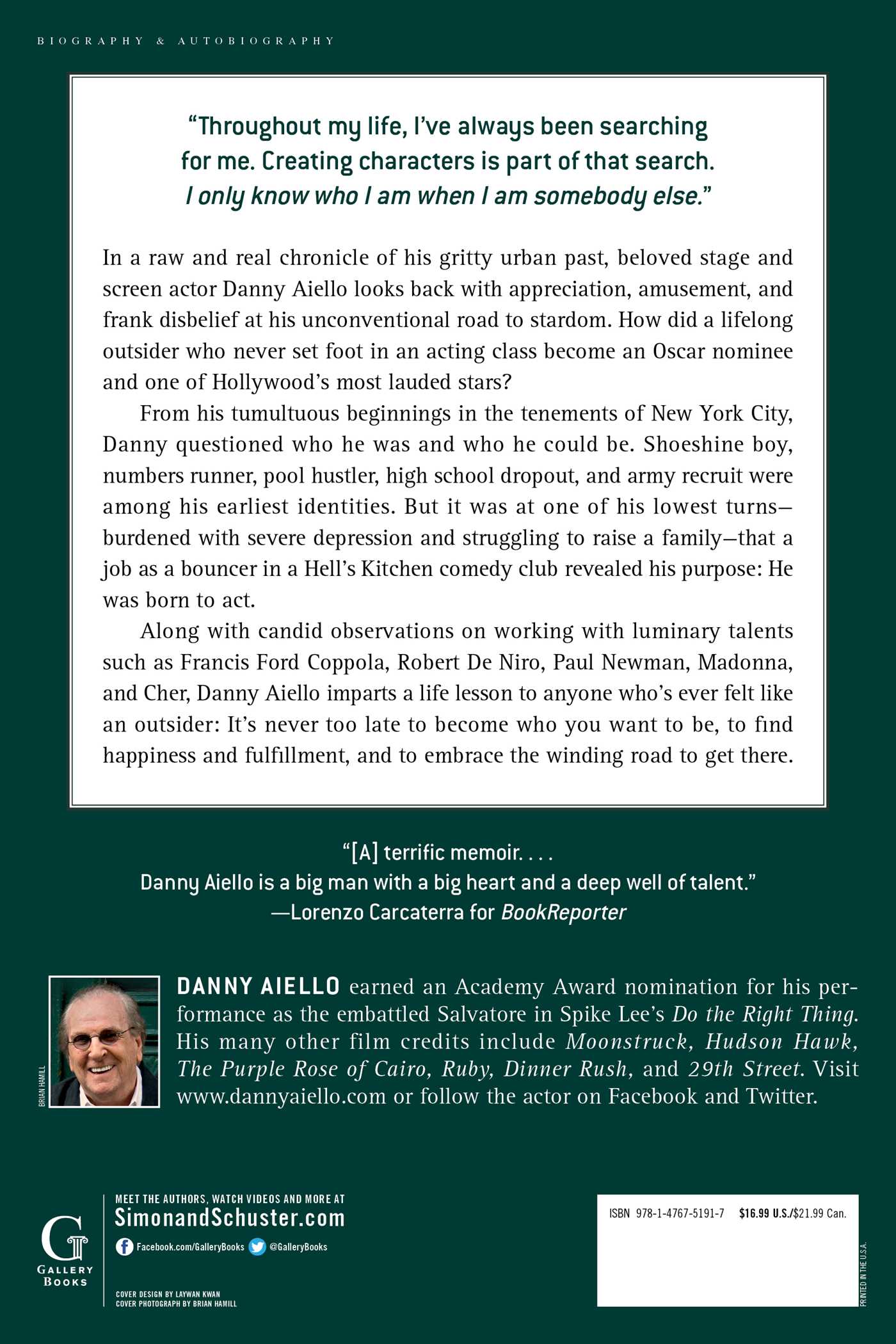 I Only Know Who I Am When I Am Somebody Else

My Life on the Street, On the Stage, and in the Movies

By Danny Aiello
LIST PRICE $16.99
PRICE MAY VARY BY RETAILER

Beloved stage and screen actor Danny Aiello’s big-hearted memoir reveals a man of passion, integrity, and guts—and lays bare one of the most unlikely success stories ever told.

Danny Aiello admits that he backed into his acting career by mistake. That’s easy to see when you begin at the beginning: raised by his loving and fiercely resilient mother in the tenements of Manhattan and the South Bronx, and forever haunted by the death of his infant brother, Danny struggled early on to define who he was and who he could be. It wasn’t until he took to the stage in the wee hours to belt out standards that Danny Aiello found his voice and his purpose: he was born to act. Performing in converted churches and touring companies led to supporting roles in such films as The Godfather: Part II and Moonstruck, and an Oscar nomination for his role as the embattled Salvatore in Spike Lee’s Do the Right Thing. For a guy who had never set foot in an acting class, this was supreme validation for being an outsider who followed his heart.

In a raw and real chronicle of his gritty urban past, Danny Aiello looks back with appreciation, amusement, and frank disbelief at his unconventional road to success. He offers candid observations on working with luminary directors Francis Ford Coppola, Woody Allen, and Robert Altman, among others, and a vast roster of actors, including Robert De Niro, Paul Newman, Madonna, Cher, and Lauren Bacall. He opens up about friends he loved, friends he lost, and the professional relationships that weren’t meant to be. Above all, Danny Aiello imparts a life lesson straight out of his own experience to anyone who’s ever felt like an outsider: It’s never too late to become who you want to be, to find happiness and fulfillment, and to embrace the winding road to get there.

I Only Know Who I Am When I Am Somebody Else Chapter One Searching for Me
In March 1990, I was sitting in the audience at L.A.’s Dorothy Chandler Pavilion, waiting for the winners to be announced at the sixty-second Academy Awards ceremony. All around me were gorgeous women and handsome men. The Oscars were the kind of event that showed this New York City kid just how far he had come from his beginnings on the streets of the West Side of Manhattan and the South Bronx.

My stomach was tied in knots. That year, I was nominated as Best Actor in a Supporting Role for my performance as Sal Frangione in Spike Lee’s controversial film Do the Right Thing.

The nomination was so important to me. It told me, You’re not only a working actor, but you’ve been accepted by your peers. For a guy who never set foot in an acting class and who only started his career in his mid-thirties, this was a supreme validation.

I recall clearly what else I felt that night, with all the glitter and glamour flowing around me like a river.

No matter where I was, I was an outsider. Even with an Oscar nomination and everybody talking about my performance, I still had a nagging sense that somehow I didn’t belong.

It’s a feeling that I’ve always had. At something like this major awards event, the sense of being an outsider was especially sharp. What am I doing here? I kept thinking. I wasn’t a member of the Hollywood inner circle. I grew up working-class, not privileged. I’m street. And here I was, surrounded by people who were more like avenues, landscaped boulevards, private drives.

The thing about being an actor, though, is that you’re never alone. With me that evening were all the characters I had ever portrayed in the movies and on the stage. They whispered in my ear, telling me that while winning isn’t everything, losing doesn’t have a hell of a lot to say for itself. Those voices are always present.

Throughout my life, I’ve always been searching for me. Creating characters is part of that search. At the Oscars that night, the truth was both simple and complicated.

I only know who I am when I am somebody else.

It sounds like a riddle, but it’s the reality of my life. When I’m playing a character, only then do I know who I am, only then am I complete.

Geena Davis, who was presenting the Best Actor in a Supporting Role award that evening, stepped up to the podium onstage. She introduced all the contenders, my name among them. I was up against some heavy hitters: Marlon Brando, Denzel Washington, Martin Landau, and Dan Aykroyd.

“The Academy Award for this year’s best supporting actor goes to . . .” She struggled opening up the envelope.

The moment hung in the balance for me. In a lot of ways, it represented a culmination of the journey I was on, leading me to great heights and devastating lows, transporting me to places like the Dorothy Chandler Pavilion in Los Angeles.

I want to invite you, the reader, on this journey in search of self. It’s my hope that this personal journey of mine might help you on yours.

Come on along.
Danny Aiello

Danny Aiello is a beloved American actor and Academy Award–nominee who has appeared in numerous motion pictures, most famously Moonstruck and Do the Right Thing, as well as Once Upon a Time in America, Ruby, The Godfather: Part II, Hudson Hawk, The Purple Rose of Cairo, Léon: The Professional, Two Days in the Valley,and Dinner Rush. He is also known for his role as Don Domenico Clericuzio in the CBS television miniseries Mario Puzo’s The Last Don.

I Only Know Who I Am When I Am Somebody Else

My Life on the Street, On the Stage, and in the Movies

By Danny Aiello
LIST PRICE $16.99
PRICE MAY VARY BY RETAILER