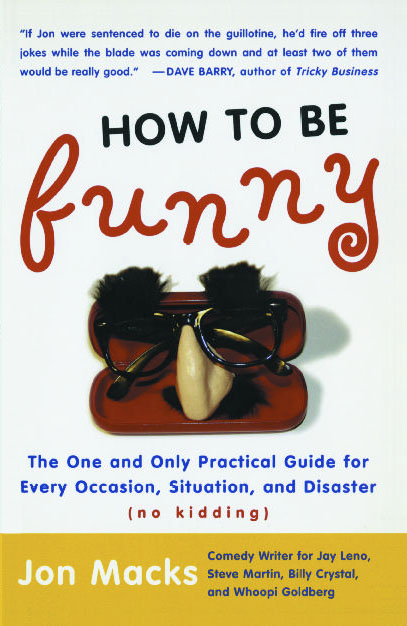 By Jon Macks
LIST PRICE $14.00
PRICE MAY VARY BY RETAILER

An invaluable guide on how to "lighten up" from a distinguished pro who has provided laughs for JAY LENO, BILLY CRYSTAL, STEVE MARTIN, ROBIN WILLIAMS, BRAD GARRETT, WHOOPI GOLDBERG, AND MANY MORE.
Who hasn't wished for the perfect withering comeback line, a clever tension-breaking quip, or a winning flirtatious remark? Being funny is hard work and not everyone is a natural. How to Be Funny is a witty guide that teaches readers precisely how to be funnier in everyday life. It's a must-read for anyone who has to speak in public, be engaging and funny at work or at play, or who hopes to one day go out on a date.
Jon Macks, a comedy writer for The Tonight Show with Jay Leno, the Academy Awards, the Emmy Awards, Hollywood Squares, and the nation's top comedians, politicians, and corporate leaders, knows his funny business. Here he demystifies the process of making people laugh, breaks down the basic building blocks and types of humor -- which include self-deprecation, misdirection, deadpan delivery, sarcasm, and "the reverse" -- and reveals the best approaches to use in common situations.
How to Be Funny features helpful (and hilarious) tips and anecdotes from the comic legends Mack's worked with -- including Jay Leno, Arsenio Hall, Gilbert Gottfried, Billy Crystal, Rita Rudner, Dave Barry, and Carrie Fisher -- in his eleven years as one of the nation's top television writers.
Whether the goal is to give a memorable public address or deliver a killer line with friends, How to Be Funny is a charming, instructive, and practical read.

But if you read this book from front to back, follow the advice, and work at being funny, you will learn to use humor to: improve your public speaking; end an argument; avoid getting beaten up; get a raise at work; make people think you're smart. You will see that being funny can make you more popular, enable you to pass the time in prison without being violated by large, angry men (especially useful for you CEO's out there), and help you get selected as a contestant on a game show because the producers look for amusing extroverts on these shows, not Harry Potter-obsessed introverts. In short, this book can help you ridicule and diminish your enemies, handle your kids, and deal with idiots in everyday situations; it will enable you to make a point, and ruin a rival's big moment -- and all of this for only $12.

Historically the male book buyer is the hardest to entice. (Unless the book has a lot of pictures and a centerfold.) So if the above-mentioned reasons don't inspire you, how about the fact that this book will help improve your sex life? If there is one thing that is certain in life, it's that the number-one trait women look for in deciding whether to have sex with someone they just met is a sense of humor. So if you have a big expense account, a six figure income, plus a sense of humor, you've got it made.

One thing to remember as you begin your journey to funny: A lot of this book is repetitive. A lot of the advice from the pros is repetitive. This is not because I get paid by the word. It's so you will realize that to be funny, there are a few basic fundamentals of comedy that you need to learn, absorb, and try, repeatedly.

CAVEAT: You don't need the "comic gene" to be funny, although I have to admit, there are people who are born funny. But these techniques and advice will not work if you have the unfunny gene. And we all know people like that. They just don't get it. They are marching to the beat of a different drummer and the drummer is Pete Best.

By the way, I used Pete Best to make a point -- outdated references fail in the world of humor. Always use a fresh topical reference. However, since my list of drummers who are total losers begins and ends with Pete Best, we're stuck with him...although one more stint in rehab for Ringo and he could once again replace Pete. But I digress. There are people who are just genetically unfunny, who can't deliver a joke because they don't know what a joke is. A classic example -- Russian president Vladimir Putin. Or Joe Piscopo.

So if you are a comedically-genetically-deformed person, return this book and get your money back.

However, if you are not in this infinitesimally small group, read on....

10 REASONS WHY BEING FUNNY IS IMPORTANT

There are three ways in life to become popular: be rich, be beautiful, or be funny. Everyone likes being around witty, entertaining people who can make them laugh. It's why you rarely see pictures of Osama bin Laden sitting at the head table of a bar mitzvah.

2. Funny people get noticed at work.

No, we're not talking about the idiot who photocopies his buttocks in the mailroom, or the moron who wastes valuable Internet time forwarding nonoriginal e-mails to everyone all day. We're talking about the employee who can keep people's interest during a presentation by being funny, the supervisor who can build loyalty and a sense of camaraderie through the bonding that comes with the sharing of a joke, or the security guard who can get a chuckle out of the angry, disgruntled employee.

It's a proven fact that people who can make others laugh make more money. It's the reason the president only makes $400,000 a year, while Carrot Top pulls down $17 million.

Sheer physical bulk can prevent the humiliation of being given a wedgie by a gang of cretins. So can a sense of humor. A quick wit and the ability to get the leader of the cretins or the "Head Heather" to laugh can turn a tense high school confrontation into a fun-filled bonding situation. Or, you can just give them your lunch money and run.

Face it, the life of a sales clerk is not easy. It ranks somewhere between proctology assistant and Jennifer Lopez's wedding planner. So who are these vessels of failed dreams going to be more responsive to: an angry trailer-park mom in curlers beating her kids upside the head in aisle 7 of K-mart while demanding to know where to find the size 44 polyester stretch pants, or you, someone who can make them laugh?

Maybe it's a direct link. Maybe to be funny, you need to be smart. You certainly need to be well read, able to connect seemingly unconnected events and pull topical references out and use them at the drop of a hat. And even if funny people aren't really smarter, they still seem that way. I really don't know if Bill Maher is smarter than President Bush but I do know this -- Maher is funnier and certainly seems to have a better grasp of the economy.

8. Being funny can cover up a multitude of sins.

People might have been willing to overlook some of Saddam Hussein's human rights violations if he were killing at the Baghdad Chuckle House on open mike night. I know I would be a lot more forgiving.

I mentioned this above as a key reason to buy this book. In the end, we all know it's true. If you can get someone to lower her barrier against laughter, you are more likely to get her to take off her clothes.

10. Being funny is obviously important enough to you that you bought this book. So with that in mind, let us begin.

Here's a quick sketch of comedy up until the beginning of the modern era.

3500 B.C.: A twenty-three-year-old cave dweller in the south of France accidentally spears a neighbor in the buttocks while hunting antelope. Hilarious laughter ensues as comedy has its first victim. Moral: weird use of everyday items is funny.

Fifth century B.C.: Aristophanes writes a series of comedic plays in ancient Greece, gets to perform them in the amphitheater, kills with his opening joke of "Two members of the Hebrew tribe walk into a bar. They buy it."

Late 1500s: Shakespeare uses subtle wit and wordplay in his early works. Since 98 percent of commoners can't read, this goes nowhere and he goes back to his bread and butter -- insult humor:

"You blocks, you stones, you worse than senseless things." Julius Caesar, Act I, Scene i.

1600-1923: No comedy; people are too preoccupied with the pox, plague, and overthrowing colonial tyrants. 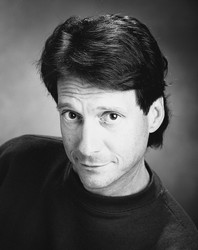 By Jon Macks
LIST PRICE $14.00
PRICE MAY VARY BY RETAILER