Being the Account of an Unjustly Villainized Pirate Written by Himself

A rollicking debut novel from award-winning playwright and screenwriter John Pielmeier reimagines the childhood of the much-maligned Captain Hook: his quest for buried treasure, his friendship with Peter Pan, and the story behind the swashbuckling world of Neverland.

Long defamed as a vicious pirate, Captain James Cook (a.k.a. Hook) was in fact a dazzling wordsmith who left behind a vibrant, wildly entertaining, and entirely truthful memoir. His chronicle offers a counter narrative to the works of J.M. Barrie, a “dour Scotsman” whose spurious accounts got it all wrong. Now, award-winning playwright John Pielmeier is proud to present this crucial historic artifact in its entirety for the first time.

Cook’s story begins in London, where he lives with his widowed mother. At thirteen, he runs away from home, but is kidnapped and pressed into naval service as an unlikely cabin boy. Soon he discovers a treasure map that leads to a mysterious archipelago called the “Never-Isles” from which there appears to be no escape. In the course of his adventures he meets the pirates Smee and Starkey, falls in love with the enchanting Tiger Lily, adopts an oddly affectionate crocodile, and befriends a charming boy named Peter—who teaches him to fly. He battles monsters, fights in mutinies, swims with mermaids, and eventually learns both the sad and terrible tale of his mother’s life and the true story of his father’s disappearance.

Like Gregory Maguire’s Wicked, Hook’s Tale offers a radical new version of a classic story, bringing readers into a much richer, darker, and enchanting version of Neverland than ever before. The characters that our hero meets—including the terrible Doctor Uriah Slinque and a little girl named Wendy—lead him to the most difficult decision of his life: whether to submit to the temptation of eternal youth, or to embrace the responsibilities of maturity and the inevitability of his own mortality. His choice, like his story, is not what you might expect.

By clicking 'Sign me up' I acknowledge that I have read and agree to the privacy policy and terms of use. Free ebook offer available to NEW US subscribers only. Offer redeemable at Simon & Schuster's ebook fulfillment partner. Must redeem within 90 days. See full terms and conditions and this month's choices.
This reading group guide for Hook’s Tale includes an introduction, discussion questions, and ideas for enhancing your book club. The suggested questions are intended to help your reading group find new and interesting angles and topics for your discussion. We hope that these ideas will enrich your conversation and increase your enjoyment of the book.

In the tradition of Gregory Maguire’s Wicked and John Gardner’s Grendel, Hook’s Tale allows Peter Pan’s legendary nemesis to finally set the record straight. With debut novelist John Leonard Pielmeier at the helm, Hook explains how he has been unjustly demonized, and why Peter Pan himself may be Neverland’s true menace.

1. The opening scene is of a nightmare during which James Cook murders a family of birds that are attacking him. Why do you think the author begins the story with this image? How are nightmares of “innocent intent” different from other nightmares?

2. When the reader first meets James Cook’s mother, the impression is that she is weak and unwell. Why is his mother’s constitution significant to Cook’s character? How are women portrayed throughout the rest of the novel?

3. The author takes readers through a series of painful events in Cook’s childhood. Do you think this is to elicit sympathy for Cook? If so, why do you think the author wants readers to connect with Cook in this way? Which scene, in your opinion, was most effective in making readers feel sympathy for him?

4. On page 16, readers meet Smee for the first time. How is the Smee in this book different from Smee in the animated Disney version of Peter Pan? Which other characters are drastically different in this version, and how so? Peter? Tiger Lily? The Darlings?

5. Cook is fixated on nicknames. What power do nicknames like Hook, Gin, and Old Carlyle have? On page 22, Cook suggests that his publisher will insist on using “Hook” in the title of his book. Why do you think he feels this way, and why do you think he dislikes his nickname so much? Why does he refuse to call Peter Pan by name until he must?

6. The narrator drops clues for the reader, such as “In time I learned the truth” (page 44). Why does the narrator feel the need to warn the reader? Do these hints build suspense?

7. On page 52, Cook discovers that no one ages on the archipelago. What were some of the other stipulations about life in Neverland? Were any of them new to this version of the story? Did this portrayal of Neverland feel more real to you than other depictions?

8. John Leonard Pielmeier, the author of Hook’s Tale, has written many successful plays, television movies, and miniseries, including Agnes of God, Gifted Hands, Choices of the Heart, The Memory Keeper’s Daughter, and the award-winning screen adaption of Ken Follett’s The Pillars of the Earth. How do you think his background influenced the style of this novel?

9. What did you think about Cook and Peter’s initial encounter on page 67? Discuss the nature of their friendship as it develops.

11. Why do you think Peter wants a shadow so badly? Why did Cook feel naked when Peter stole his shadow? How did this act change their friendship? What does the shadow symbolize?

12. On page 120, Peter is upset that Cook is leaving him to be with Tiger Lily. What does this scene represent?

13. Why do you think Cook is unable to see Tink? Do you think Tink is real, or is she a figment of Peter’s imagination?

14. Discuss Doctor Slinque’s role in Hook’s Tale. How did this new character impact the narrative?

15. How did Cook’s relationship with his father change throughout the book? What did you think of Cook’s ultimate revenge?

1. Read J. M. Barrie’s original play Peter Pan; or, the Boy Who Wouldn’t Grow Up from 1904 or his novel Peter and Wendy from 1911. Compare and contrast Barrie’s original vision with Pielmeier’s vision for Hook’s Tale.

2. Watch the musical version of Peter Pan starring Mary Martin from 1954. Discuss how Hook’s Tale adds to the story.

3. Consider the narratives of other famous villains in literature: Lord Voldemort, the White Witch, Professor Moriarty, Mrs. Danvers, Iago, Count Dracula, Lady Macbeth, Uriah Heep. How might some of their stories be retold? 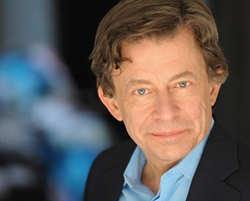 John Pielmeier is a three-time Emmy- and Golden Globe-nominated playwright and screenwriter. His successful plays, television movies, and miniseries include Agnes of God, Gifted Hands, Choices of the Heart, The Memory Keeper’s Daughter, and successful screen adaption of Ken Follett’s The Pillars of the Earth. He has received the Humanitas Award (plus two nominations), five Writers’ Guild Award nominations, a Gemini nomination, an Edgar Award, the Camie Award, and a Christopher Award. He is married to writer Irene O’Garden and lives in upstate New York. Hook’s Tale is his first novel.

Being the Account of an Unjustly Villainized Pirate Written by Himself