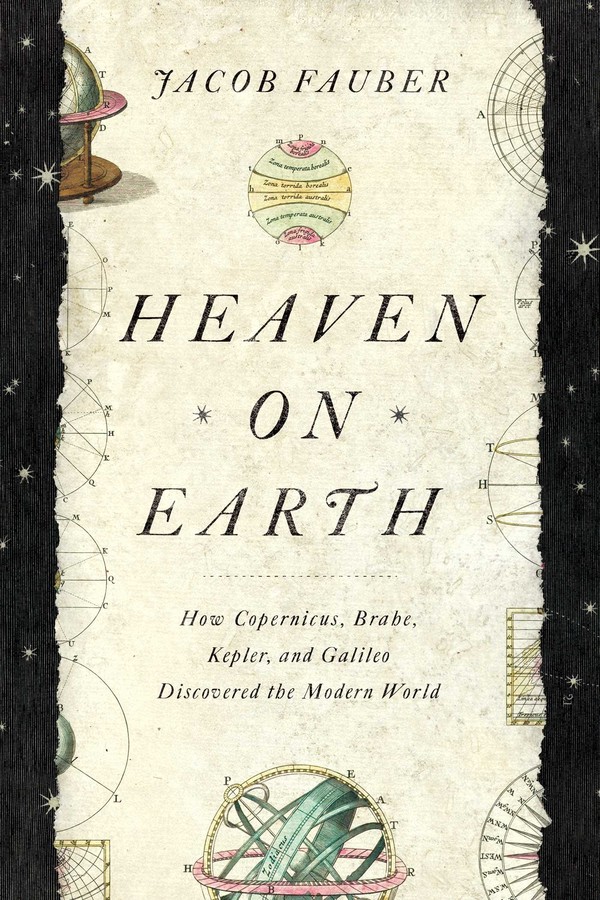 How Copernicus, Brahe, Kepler, and Galileo Discovered the Modern World

A vivid narrative that connects the lives of  four great astronomers as they discovered, refined, and popularized the first major scientific discovery of the modern era: that the Earth moves around the Sun.

Today we take for granted that a telescope allows us to see galaxies millions of light years away. But before its invention, people used nothing more than their naked eye to fathom what took place in the visible sky.  So how did four men in the 1500's—of different nationality, age, religion, and class—collaborate to discover that the Earth revolved around the Sun? With this radical discovery that went against the Church, they created our contemporary world—and with it, the uneasy conditions of modern life.

Heaven on Earth is an intimate examination of this scientific family—that of Nicolaus Copernicus, Tycho Brahe, Johannes Kepler, and Galileo Galilei. Fauber juxtaposes their scientific work with insight into their personal lives and political considerations, which shaped their pursuit of knowledge. Uniquely, he shows how their intergenerational collaboration was actually what made the scientific revolution possible.

Ranging from the birth of astronomy and the methods of early scientific research, Fauber reveals the human story that underlies this civilization altering discovery. And, contrary to the competitive nature of research today, collaboration was key to early scientific discovery.  Before the rise of university research institutions, deep thinkers only had each other. They created a kind of family, related to each other via intellectual pursuit rather than blood.

These men called each other “brothers,” “fathers,” and “sons,” and laid the foundations of modern science through familial co-work. And though the sixteenth century was far from the an open society for women, There were female pioneers in this “family” as well, including Brahe's sister Sophie, Kepler’s mother, and Galileo's daughter.

Filled with rich characters and sweeping historical scope, Heaven on Earth reveals how the strong connections between these pillars of intellectual history moved science forward—and how, without them, we might have waited a long time for a heliocentric model of the universe.

“Fauber’s chronicling of these four astronomers’ scientific advances and their surrounding intrigues is lively and unfailingly fascinating, down to the footnotes.”

“As Fauber drives home in this dynamic science history, their intermeshed stories form a mighty “intergenerational epic” sweeping in the likes of Brahe’s sister Sophie and Galileo’s daughter Virginia. A wonderfully wrought explication of how a powerful thesis began its journey to becoming unavoidable fact, and seeded modernity in the process.”

“Fauber seamlessly merges biography, history, and science in this amazing look at the four 16th-century astronomers whose work revealed the heliocentric solar system. Rich with detail, this is an extraordinary saga of stubborn scientific curiosity, and of the first inklings of this planet’s true place in the universe.”

“What Fauber does well is humanize these four residents of the pantheon of science...the story is seldom less than fascinating. A readable, enjoyable contribution to the history of science.”

How Copernicus, Brahe, Kepler, and Galileo Discovered the Modern World