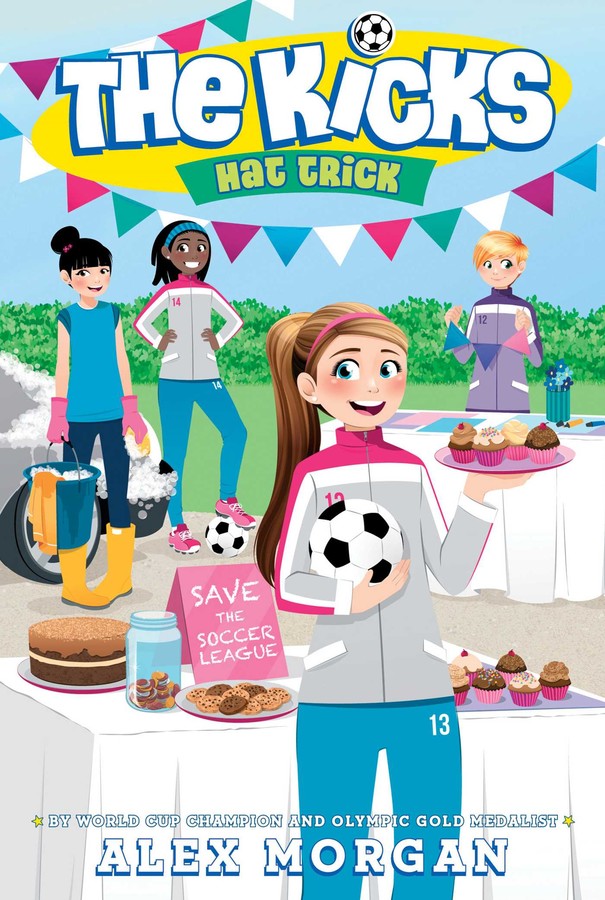 The Kicks are dedicated to soccer and to friendship—but can they balance all their goals? Find out in book four in the fun and empowering New York Times bestselling middle grade series from star soccer player and Olympic gold medalist Alex Morgan.

Now that playoffs are over, the Kicks won’t be playing together again until the spring. But soccer-crazy Devin can’t imagine a life without soccer! She and her friends decide to try out for a travel team in a very competitive local league, but not everyone makes the cut.

Meanwhile, Devin’s little sister, Maisie, wants to try out for her elementary school’s soccer program. But due to budget cuts, the program has been eliminated! The Kicks rally together to help raise money—and volunteer to help with four different projects on the same day!

Things get hectic as the girls deal with being on the competitive, tougher team; figuring out how to keep their friendships together as they all go in different directions; and trying to save the elementary school’s soccer program. If they can pull off all three, it will be a true hat trick!

Steven and I went sailing across the screen of Zoe’s laptop, swaying to the music.

“Oooooooooooh, Devin,” Jessi said, and poked me in the ribs.

“Oooooooooooh, Jessi,” I teased back, pointing at the computer screen as Jessi and Cody came dancing into the camera’s view. Jessi and I were huddled together with Zoe and Emma on Zoe’s bed, watching the video from Zoe’s bat mitzvah the week before.

All of our eyes widened as we watched the screen, waiting for the moment that we hadn’t been able to stop talking about all week.

Jessi and Cody glided among the other dancers, steps away from me and Steven. It was a slow song, and just as it ended, the deejay immediately launched into a fast-paced number by Brady McCoy, a new pop star who had a hit song called “Believe in Me.”

As the song started, shrieking filled the air, and Emma burst through the dancers.

“This is my jam!” she yelled in the video as she jumped excitedly to the middle of the dance floor. But instead of stopping, she lost her balance.

“Whoa!” she yelled, her long, shimmering emerald-­green party dress tangling up around her legs. Emma waved her arms wildly in the air for a moment, but nothing could stop her from falling. She toppled over, knocking into Jessi and Cody, who in turn bumped into me and Steven, and we all ended up in a big pile on the floor.

Lying on the bed, we all shrieked with laughter as we watched ourselves flopping around on the dance floor. In the video, Zoe was laughing so hard she had tears running down her face. We were all hysterical and went into even harder peals of laughter when Zoe’s mom and my mom came up to us on the video, concerned. They tried to help us up, but we were laughing so hard, we couldn’t move.

“That was so awesome!” Zoe said as we watched ourselves carrying on. “It’s one of those perfect party moments you can’t plan.”

“Perfect party moment?” Emma asked in disbelief. “I thought I had ruined your perfect day!”

Zoe shook her head. “No way. Those are the memories I’ll never forget. And I’ll always start laughing when I think about the dance floor pileup!”

My own smile turned to a frown. “I wish Frida could be here with us to see it now. She would have loved it. The drama!”

“I wonder what’s going on with Frida,” said Jessi. Frida was our actor friend and soccer teammate on the Kentville Kangaroos. We called ourselves the Kicks, and we had just finished a pretty good season of soccer.

We all shrugged. Frida could be dramatic, and she had sent a mysterious text this Saturday morning, right before we were all supposed to meet at Zoe’s house. It read: Sorry, but something big is happening. I can’t make it today. And I can’t say why—yet. We’ll talk soon.

“You know Frida,” Emma said, smiling. “Maybe aliens ate her homework or she had to save the world from an army of evil wizards.”

Frida had started out as a nervous soccer player, until she’d figured out that if she pretended to be someone else on the field, it helped her to calm down and focus. We all helped by coming up with ideas for her. It was always a lot of fun to try to think of different parts for Frida to play.

“At least something exciting is happening,” Jessi complained. “With the fall soccer season over and all the planning for Zoe’s bat mitzvah finished, I’ve had too much free time on my hands. I’ve been so bored. I’ve even been looking forward to doing my homework every night.”

“That is serious,” I deadpanned, as Emma and Zoe burst out laughing. At one point Jessi had avoided doing her homework so much that her grades had gone down, almost getting her kicked off the Kicks! She’d turned it around and had gotten her grades way up, but we had never heard her say she looked forward to homework before.

Jessi laughed along with them. “It’s true.”

“I get it,” I said. “I’ve been in serious soccer withdrawal myself.” The Kicks had made it to the first game in the state championship tournament but had lost. We had come so close. I kept going over the game in my head, knowing I could have done things better. I was itching to get back onto a soccer field to put what I had learned to use. But it was only November, and the Kicks wouldn’t play together as a team again until February, when practice would start back up.

Suddenly Jessi leaped off the bed. “I’m such an idiot!” she yelled, startling us all.

“What are you talking about?” Zoe asked, her eyes wide.

“The winter soccer league,” Jessi said, the words coming out in a rush. “I totally forgot. And the tryouts are coming up soon. Maybe we missed them!”

“Wait. What?” I asked, my excitement growing. “There’s a soccer team we can play on until the Kicks are back together?”

Jessi reached for Zoe’s laptop. “Can I?” she asked, and Zoe nodded and handed it over. Jessi began typing furiously. “You know, Devin, when you first got here, the Kicks were in bad shape. It was just for fun to play on the soccer team. I never thought about playing it seriously, which is why I never really considered the winter league. But now everything has changed!”

Jessi squinted at the computer screen. “Got it!” She clicked, and a screen came up for the Gilmore County U14 League. “Tryouts are this Monday! We haven’t missed them.”

“Jessi, that’s awesome!” I leaped off the bed and hugged her. We began jumping around the room together.

“And me too!” Emma sailed off the bed and collided into us like a bowling ball knocking over pins. Once again we were a pile of people on the floor. After we all managed to stop laughing and get untangled, we sat back on Zoe’s bed.

“So Maisie won’t be the only one in the family playing soccer this winter,” I told them. “She joined her elementary school’s program. Her practices start next week.”

I rolled my eyes. Sometimes my little sister, Maisie, could be adorable, but mostly she was just annoying. Although, I had to admit she did have some soccer skills. I had kicked around the ball in the backyard with her the other day, and she’d showed the potential for some pretty good footwork.

Now I heard a car horn toot outside. I looked at the clock. “That must be my mom,” I said. “Gotta go!”

When I walked outside, I smiled as I saw our family’s familiar white van. It had traveled with us when we’d moved from Connecticut to California this past summer. Maisie called it the Marshmallow. As I climbed inside, my phone beeped, letting me know I had a text message. I figured it was Jessi, all excited about the travel team. But instead it was a text from Frida sent to all of us.

BIG NEWS! it said, followed by a bunch of emoticons of firecrackers, smiley faces, and clapping hands. We need to video chat ASAP!

Wow! I wondered what was going on. Before I could even tell my mom about Frida’s text or the winter soccer league, Maisie let out a wail from the backseat.

“Bad news!” she yelled before bursting into tears. 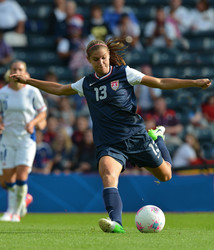