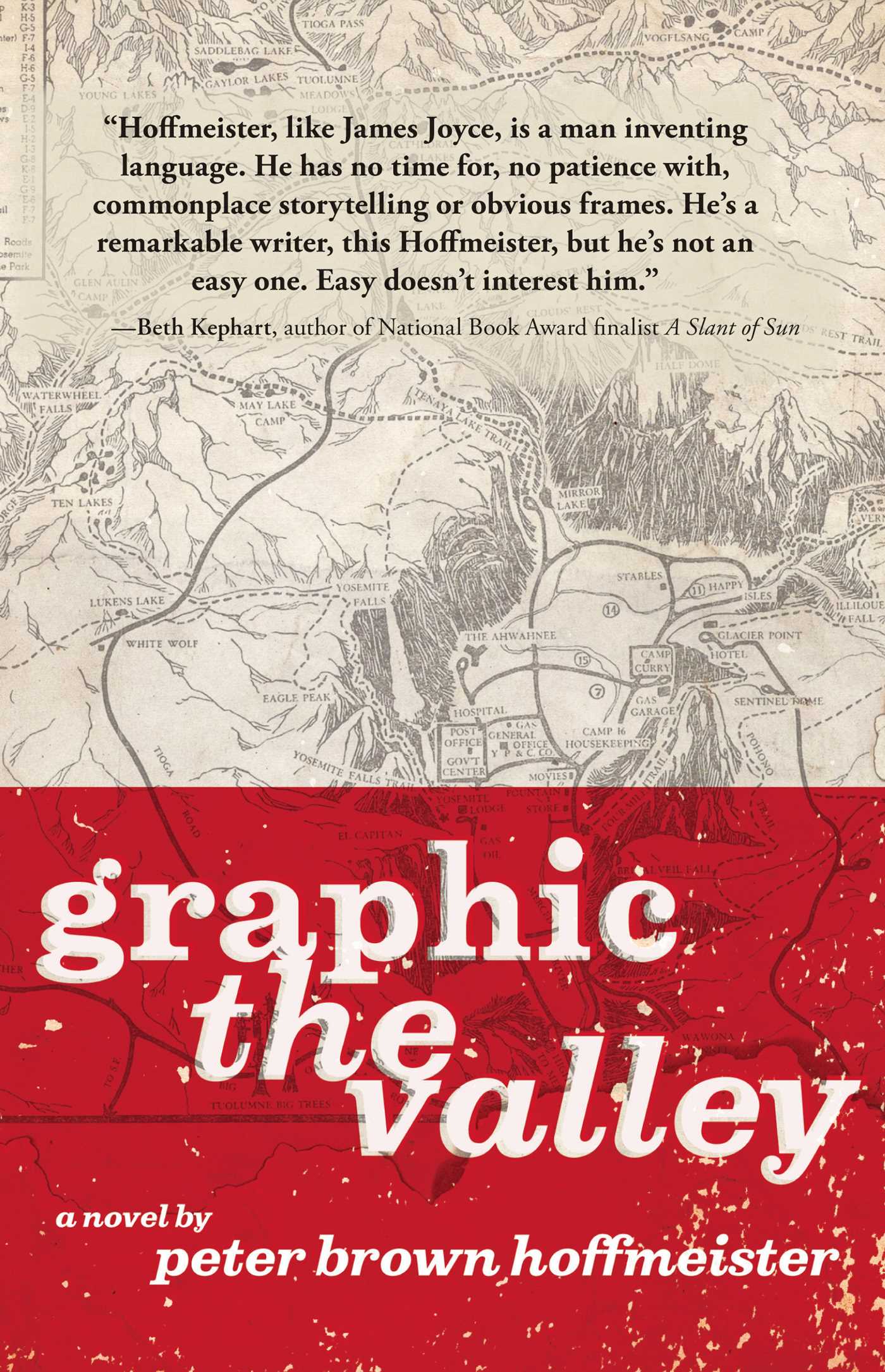 Tenaya has never left Yosemite Valley. He was born in a car by the Merced River, and grew up in a hidden camp with his parents, surviving on fish, acorns, and unfinished food thrown away by the park's millions of tourists. But despite its splendor, Tenaya's Yosemite is a visceral place of opposites, at once beautiful, dangerous, and violent. When he meets Lucy, a young woman from the south side of the park, Tenaya must choose between this new relationship and the Valley, terrorism and legend, the sacred versus the material. In this modern retelling of Samson and Delilah, Graphic the Valley explores mythical strength, worldly greed, love, lust, and epic destruction. Set entirely in the majestic Yosemite Valley, Hoffmeister recalls Edward Abbey's vivid sense of place and urgent call for preservation of one of the world's most spectacular sites.

"A vigorously original retelling of the Samson and Delilah story set in Yosemite. Mr. Hoffmeister, an experienced outdoorsman and magazine writer, marvelously harnesses the valley's natural wonders... The avenging destruction wrought by both Tenaya and the natural world is captured with beauty and aplomb. Mr. Hoffmeister brings a new found sense of urgency to one of the Bible's oldest and strangest tales." --Wall Street Journal

"This fascinating novel is both an outsider's coming-of-age story . . . and a deeper meditation on the beauty of the wild world . . . the images, sometimes mythic . . . are unforgettable . . . Passionately conceived, arrestingly original, this will be life changing for some readers." --Booklist starred review

"In Peter Brown Hoffmeister's Graphic the Valley, you'll enter the life of Yosemite's 'other' visitors, the nomadic climbers and rootless drifters, fed by dreams, a wish to escape, or a native's desire to never leave his ancestral home. Hoffmeister's intimate knowledge of this place, this way of life, pulls you in, ensnares you in the struggle to protect Yosemite from itself. But, more than that, you'll live with these people, feel the exhilaration of new love, the crushing pain of its loss, become a young man searching for who he is, all amid the valleys, domes and rivers of one of the world's most beautiful places." --Pete Fromm, author of Indian Creek Chronicles: A Winter Alone in the Wilderness

"Peter Hoffmeister is as ambitious as he is original. Graphic the Valley is many things at once: an ode to a place, a romance, a family drama, and a cautionary tale. From page one, it will surprise you. By the end, it will leave you surprisingly affected." --Miriam Gershow, author of The Local News

"Part The Jungle Book, part The Monkey Wrench Gang . . . Graphic the Valley is worth a visit. A . . . compelling narrative." --Willamette Week

"An excellent coming-of-age debut novel. [Hoffmeister] skillfully interweaves the story of modern-day life in Yosemite with the the area's turbulent and tragic history . . . The book's sense of place is strong, capturing Yosemite's wild beauty. Both adult and mature young adult readers and lovers of literary ecofiction will enjoy this fast-paced love story." --Library Journal, Starred Review

"With refreshingly fundamental first person narration and unusual character development . . . each page of this novel illuminates its reader's imagination with both tenacity and innocence." --Publishers Weekly

"The book draws together rock climbing, an attempt to correct the wrongs done to Native American history in Yosemite National Park, a Samson and Delilah tale, eco-sabotage and the tragedy of what man does to nature. Hoffmeister's characters are complex and . . . reflect the duality and the power nature holds over man." --Eugene Weekly

"This epic-style tale contains historic renderings of the Mariposa Battalion's invasion in 1851, the flood of 1997, the Lodestar crash and climber involvement, and old Chief Tenaya's death over a bad horse deal." --Rock and Ice

"Graphic the Valley, the debut novel by Eugene’s Peter Brown Hoffmeister, is as bold as its biblical inspiration. Hoffmeister’s ability to convey the small and vital moments of this personal trial that leaves a grand impression.” --The Register-Guard

As featured on NPR.