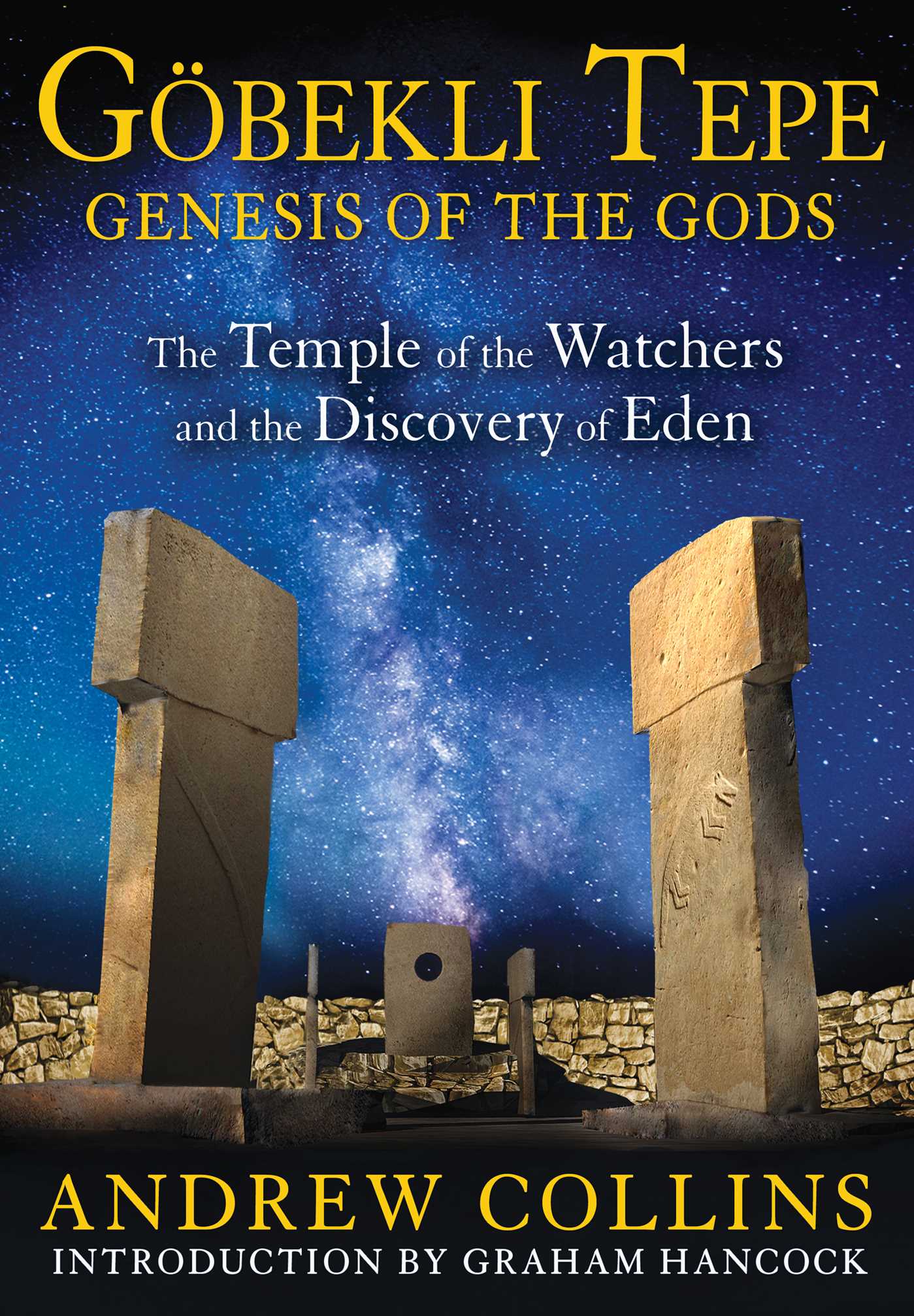 An exploration of the megalithic complex at Göbekli Tepe, who built it, and how it gave rise to legends regarding the foundations of civilization

• Details the layout, architecture, and exquisite carvings at Göbekli Tepe

Built at the end of the last ice age, the mysterious stone temple complex of Göbekli Tepe in Turkey is one of the greatest challenges to 21st century archaeology. As much as 7,000 years older than the Great Pyramid and Stonehenge, its strange buildings and rings of T-shaped monoliths--built with stones weighing from 10 to 15 tons--show a level of sophistication and artistic achievement unmatched until the rise of the great civilizations of the ancient world, Sumer, Egypt, and Babylon.

Chronicling his travels to Göbekli Tepe and surrounding sites, Andrew Collins details the layout, architecture, and exquisite relief carvings of ice age animals and human forms found at this 12,000-year-old megalithic complex, now recognized as the oldest stone architecture in the world. He explores how it was built as a reaction to a global cataclysm--the Great Flood in the Bible--and explains how it served as a gateway and map to the sky-world, the place of first creation, reached via a bright star in the constellation of Cygnus. He reveals those behind its construction as the Watchers of the Book of Enoch and the Anunnaki gods of Sumerian tradition.

Unveiling Göbekli Tepe’s foundational role in the rise of civilization, Collins shows how it is connected to humanity’s creation in the Garden of Eden and the secrets Adam passed to his son Seth, the founder of an angelic race called the Sethites. In his search for Adam’s legendary Cave of Treasures, the author discovers the Garden of Eden and the remains of the Tree of Life--in the same sacred region where Göbekli Tepe is being uncovered today.

Chapter 12
Fear of the Fox’s Tail

The imposing central pillars in Göbekli Tepe’s Enclosure D both sport wide belts, at the front of which, beneath a centrally placed belt buckle, fox-pelt loincloths have been carved, the animal’s hind legs and long bushy tail extending down to knee level.

That leaping foxes appear also on the central pillars in the large enclosures at Göbekli Tepe suggests that the entrant passing between their twin central pillars would have encountered this vulpine creature upon accessing the otherworldly environment reached via the enclosures’ inner recesses.

So why foxes, especially as they are usually seen in primitive religions, especially in Africa, as cosmic tricksters, evil twins of the true creator god, responsible only for chaos and disarray in the universe?

Was the fox the chosen animal totem of the Hooded Ones, the faceless individuals portrayed by the T-shaped pillars? If the answer is yes, then what does it mean? The key is the strange belt buckle immediately above the fox-pelt loincloth on the enclosure’s eastern pillar (Pillar 18). A similar belt buckle is seen on the western pillar (Pillar 31), although here it is left unadorned, in the same way that the figure’s belt, in complete contrast to the one worn by its eastern counterpart, is completely devoid of any glyphs or ideograms.

Only on the eastern pillar does the belt buckle reveal something very significant indeed. It shows a glyph composed of a thick letter U that cups within its concave form a large circle from which emerge three prongs that stand upward. That this emblem is worn centrally, on a belt festooned with strange ideograms, suggests that it has a very specific function.

Having examined the belt buckle glyph at some length, it is the author’s opinion that it represents the principal components of a comet. The circle is its head or nucleus, the U-shape is the bow shock that bends around the front leading edge of the nucleus and trails away as the halo. The upright prongs denote three separate tails, with multiple tails being a common feature of comets.

That the comet’s “tails” on the belt buckle stand upward also makes sense, for these are often seen to trail into the night sky as the comet reaches perihelion. This is its final approach and orbit around the sun before reemerging on the other side in readiness for the return passage through the inner solar system. As this takes place the solar magnetic fields cause the gaseous particles of the comet to point away from the sun, and so when the comet is seen in the sky, either in the pre-dawn light or, alternatively, just after sunset, its tail or tails point upward from the horizon creating an unforgettable sight.

Mark of the Comet

Yet even assuming that the belt buckle glyph does show a comet, could this not simply be a personal device without any real meaning to the function of Göbekli Tepe? This appears unlikely, since the pillar is festooned with ideograms of a probable celestial nature. The belt’s C and H glyphs would appear to have cosmological values, as does the carved eye held within a slim crescent worn around the “neck” of the T-shaped monolith. In addition to this, it does seem as if Enclosure D’s eastern central pillar has a greater function than its western neighbor, almost as if one twin is alive, while the other functions as a ghost or echo of the other.

Regardless of these facts Pillar 18’s belt buckle is simply not enough to demonstrate that comets held some importance at Göbekli Tepe. There is, however, another tantalizing link between the symbol of the comet and Enclosure D--this being the fox-pelt loincloths seen beneath the belt buckle on both monoliths. Universally the fox, and the fox tail in particular, has been seen as a metaphor for comets due to the hairlike appearance of their long tails. Even in British heraldry the device known as the comet or blazing star is drawn to resemble the fox’s tail. It is for this reason that comets have occasionally been personified as having clear vulpine and--as we shall see--canine (doglike) and lupine (wolflike) qualities of a dark, foreboding nature.

That the hunter-gatherers of southeast Anatolia so readily gave up their nomadic lifestyles in order to build monumental architecture in an unprecedented manner argues persuasively that this incoming, godlike company of the “Hooded Ones”--represented by the T-shaped pillars--must have had some kind of hold or influence over the people. Perhaps they claimed they had some direct connection with the supernatural creature behind the manifestation of comets.

Is it possible that the enclosures embody a belief that by synchronizing the enclosures with cosmic time cycles it would help provide the builders with enough information to control the influence of comets on a supernatural level? Was it these communities’ absolute fear and loathing of comets that motivated them to abandon their old lifestyles in order to build monumental architecture on such a grand scale?
Andrew Collins

“Andrew Collins has not only written the definitive explanation of Gobekli Tepe, but he has probably explained one of the most important mysteries of all time: Where and how did modern humans evolve? This is a masterpiece of work that brings ancient history to life.”

“Here is an author to watch. Here is someone interested in the truth who will take us there at all costs.”

– Rand Flem-Ath, coauthor of Atlantis Beneath the Ice

“Göbekli Tepe: Genesis of the Gods by Andrew Collins is a comprehensive interpretation of the oldest advanced temple complex on Earth. Like Pompeii emerging from volcanic ash in 1599, Göbekli Tepe’s last moments were preserved by back-fill 10,000 years ago that totally preserved it as a museum of early prehistory. The extraordinary raised reliefs, pictograms, and pillars—many over twenty-feet tall and weighing many tons—tell the story of a forgotten culture from 11,500 years ago. World-renowned for his explorations of the prehistoric Middle East, Collins weaves together archeological, anthropological, astronomical, and spiritual aspects of Göbekli Tepe. His insights of Paleolithic sky-to-Earth cultic practices open our minds to Eden in the early Neolithic. In my own books, I have theorized that a series of cataclysms around 13,000 to11,500 years ago devastated Earth and traumatized our ancestors. Collin’s insights into this ancient site constructed by humans who were most likely recovering from post-cataclysmic trauma are compelling. This clear and correct interpretation of Göbekli Tepe offers even more! He draws our minds even deeper back 17,000 years to the Solutrean phase to describe human cultural development before the cultural regression. Göbekli Tepe awakens ancient memory to process deeply hidden trauma, from the past because it is a faithful and accurate depiction of the Paleolithic advanced culture. A must-read for anybody who wants to know the real story before “history” began.”