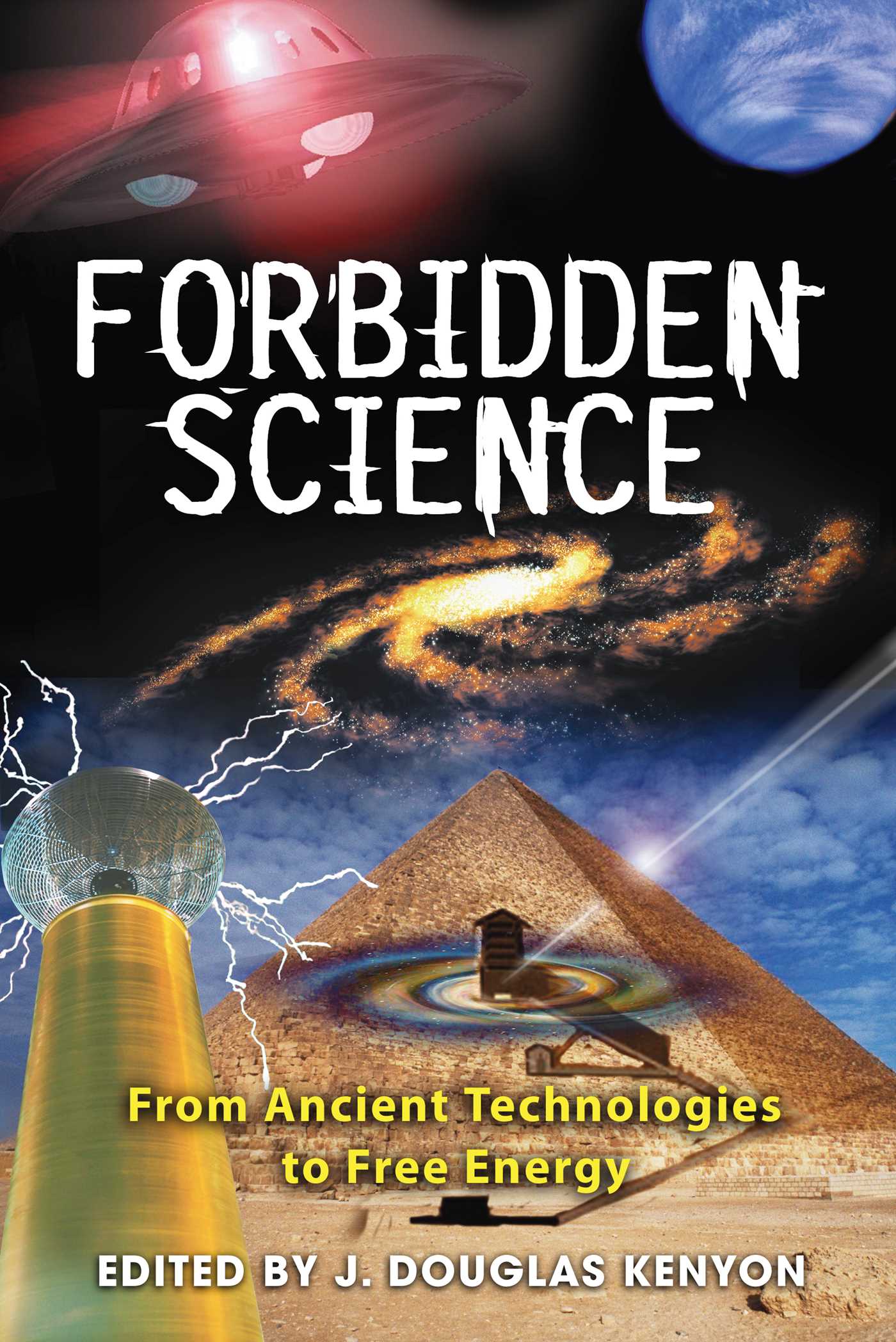 Following the model of his bestselling Forbidden History and Forbidden Religion, J. Douglas Kenyon has assembled from his bimonthly journal, Atlantis Rising, material that explores science and technology that has been suppressed by the orthodox scientific community--from the true function of the Great Pyramid and the megaliths at Nabta Playa to Immanuel Velikovsky’s astronomical insights, free energy from space, cold fusion, and Rupert Sheldrake’s research into telepathy and ESP.

There is an organized war going on in science between materialistic theory and anything that could be termed spiritual or metaphysical. For example, Masaru Emoto’s research into the energetics of water, although supported by photographic evidence, has been scoffed at by mainstream science because he has asserted that humans affect their surroundings with their thoughts. The materialism or absolute skepticism of the scientific establishment is detrimental to any scientific inquiry that thinks outside the box. This mentality is interested in preserving funding for its own projects, those that will not rock the establishment. From Tesla’s discovery of alternating current to Robert Schoch’s re-dating of the Sphinx, this book serves as a compelling introduction to the true history of alternative and New Science research.

Tesla, a Man for Three Centuries

Our Debt to the Eccentric Croatian Inventor Continues to Grow

We are far from the time of late nineteenth- and early twentieth-century Nikola Tesla, when experiment and the concrete technological device based on experiment were the ultimate arbiter of Truth. Today we live in establishment science’s world of Absolute Fiction. In this world, hundreds of experiments that show irrefutable evidence, for example, of nuclear reactions occurring at low-energy (LENR/“cold fusion”) can be dumped into the trash bin of alleged scientific failure. When Tesla worked, another very serious component of the universe was very much a critical topic of discussion among physicists--the aether (or ether). This was the postulated finely structured substance that simply had to exist if there was to be any hope of explaining how light waves were to travel through what otherwise would be just a vacuum of absolute “nothingness.”
Establishment science long ago threw out any serious discussion of the aether and its measurement, but the spirit of Tesla lives and there is much unfinished business at hand for physics. We must remember that when Tesla lived and worked, the aether was inextricably connected with the concept of electricity--in addition to it being the medium of the transmission of light and other hertzian electromagnetic waves. The idea of “particles of electricity”--later to be discovered and called “electrons”—was not yet in vogue. Electricity was thought of as something like an intangible fluid, literally “etheric.” In a seminal talk before the American Institute of Electrical Engineers (AIEE) in May 1891, at what was then called Columbia College in New York City, Tesla spoke these telling words: “Of all the forms of nature’s immeasurable, all-pervading energy, which ever and ever change and move, like a soul animates an innate universe, electricity and magnetism are perhaps the most fascinating. . . . We know that electricity acts like an incompressible fluid; that there must be a constant quantity of it in nature; that it can neither be produced or destroyed . . . and that electricity and ether phenomena are identical.” Tesla noted that this aether was everywhere moving and dynamic. The use of the aether would be the salvation of humankind, he said: “. . . with the power derived from it, with every form of energy obtained without effort, from stores forever inexhaustible, humanity will advance with giant strides. It is a mere question of time when men will succeed in attaching their machinery to the very wheelwork of nature.”
Of course, in Tesla’s lifetime the wheelwork of nature--the aether--was not harnessed. It was to become very much out of style to be talking about an aether. The advent of Albert Einstein’s relativity theory had begun to abolish the aether from the physicists’ vocabulary in the 1920s and 1930s. Yet when TIME magazine put Tesla on its cover to celebrate his seventy-fifth birthday (July 10, 1931), it referred to Tesla’s work toward harnessing an “entirely new and unsuspected [energy] source.” Was this from the aether? Perhaps.
Tesla had long hoped to be able to distribute electric power globally through the medium of the aether, power generated at the transmission point with benign and unlimited sources such as hydroelectric power. The power would be consumed only as needed at millions of receivers, being carried to each within the resonating cavity surrounding the body of the earth. Such power would be transmitted not by “electromagnetic radiation,” as we ordinarily think of it (oscillating electric and magnetic waves transverse to the direction of propagation), but by longitudinal waves, which were more akin to longitudinal pressure waves in the air--the propagation of sound. He had conducted many experiments that seemed to show that such non-electromagnetic power propagation was possible. Indeed, Tesla illuminated electric bulbs at good distances.
Consider Tesla’s special induction coils, called “Tesla coils” these days. For a long time, good experimenters have been puzzled about the workings of Tesla coils. It seems that Tesla coils are rich, indeed, with clues to the very structure of a dynamic aether. Recent experiments touch on the deep issue of the aether and its relation to what are evidently two basic forms of electricity, the accepted form (massbound, the flow of electrons), and the other not accepted at all by conventional science: massfree, capable of flowing in and around wires, as well as being transmitted as Tesla waves through gas media and vacuum. The massfree form of electricity might be called “cold electricity.”
This hearkens back to another fundamental issue, the very nature of some nonstandard biological energies, which are also presumed not to exist and are the subject of much mockery these days. I have become convinced that these biophysical energies are integral to the nature of aether. When tracing back the origins of twentieth-century conceptions of organisms as purely biochemical systems, one comes to the argument about “vitalism,” or “animal electricity,” that originated in the scientific controversy between L. Galvani and A. Volta in the late eighteenth century. It turns out that much was lost in the marginalizing of Galvani’s “animal electricity” ideas of unipolar (single wire) electric flow by the ascendant bipolar battery conceptions posed by Volta, which dominate our understanding of electricity today. But the conceptions of Tesla are in the process of returning in, this, Tesla’s third century. Tesla was very interested in the electrical component of life-energy, as was another aether theorist, Lord Kelvin. Thus, we owe a lot to Tesla, not only for the technology that runs our world today but also for the future energy sources that will abolish the Hydrocarbon Fuel Age and the future biomedicine that will seamlessly integrate Occidental medicine with the wisdom of the East. These matters can be adjudicated in laboratory experiment, even as the essentially psychotic scientific establishment--ignorant of the facts of its own history and only too willing to insult some of its greatest benefactors--ignores it all.

"If 'fringe science', or 'voodoo science' (to use a couple of establishment buzzwords) interests you; if you are open to non-traditional views of the universe (potential anti-gravity, archeo-astronomy, alien life forms, and ESP among others); if you simply want to see the 'other side' of the arguments; this book should be an interesting read for you."

"This book serves as a compelling, if controversial, introduction to the true history of alternative and New Science research, as well as fascinating possible truths about the world we live in."

"In these pages, you will find clearly delineated arguments as to why the materialistic prejudice of the scientific establishment, committed to preserving funding for its own projects, is detrimental to any scientific inquiry that thinks outside the box."

"This volume may interest those who study public attitudes toward science or the boundary between science and pseudoscience."

"We are coming to realize that consciousness not only affects matter but creates it, not the other way around, which is the traditional Newtonian view. Read what 19 cutting-edge scientists have to say about this and other "out of the box" discoveries that are being suppressed."

" . . . a review recommended for any serious new age library."

“Forbidden Science is a dangerous book. And by dangerous I mean that in a sense of awakening.”