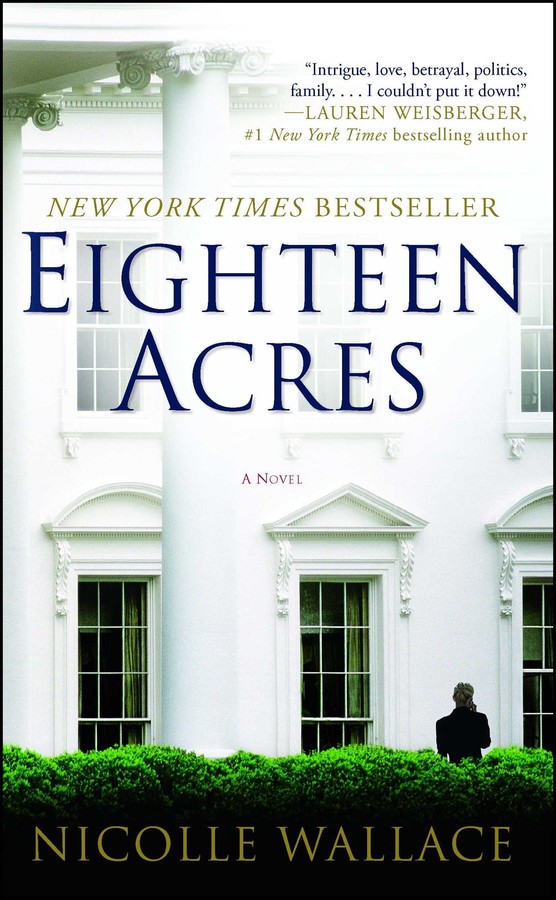 From the former Communications Director for the White House and current political media strategist comes a suspenseful and smart commercial novel about the first female president and all dramas and deceptions she faces both in politics and in love.

Eighteen Acres, a description used by political insiders when referring to the White House complex, follows the first female President of the United States, Charlotte Kramer, and her staff as they take on dangerous threats from abroad and within her very own cabinet.

Charlotte Kramer, the 45th US President, Melanie Kingston, the White House chief of staff, and Dale Smith, a White House correspondent for one of the networks are all working tirelessly on Charlotte’s campaign for re-election. At the very moment when they should have been securing success, though, Kramer’s White House implodes under rumors of her husband’s infidelity and grave errors of judgment on the part of her closest national security advisor.  In an upheaval that threatens not only the presidency, but the safety of the American people, Charlotte must fight to regain her footing and protect the the country she has given her life to serving.

Eighteen Acres combines political and family drama into one un-put-downable novel. It is a smart, juicy and fast-paced read that we’re sure fans of commercial women’s fiction will fall in total love with.

This reading group guide for Eighteen Acres includes an introduction, discussion questions, ideas for enhancing your book club, and a Q&A with author Nicolle Wallace. The suggested questions are intended to help your reading group find new and interesting angles and topics for your discussion. We hope that these ideas will enrich your conversation and increase your enjoyment of the book.

Eighteen Acres follows three powerful women in Washington, D.C.: Charlotte Kramer, the first female President of the United States; Melanie Kingston, the White House Chief of Staff; and Dale Smith, a White House correspondent for one of the top national networks. All three women struggle to balance their high-powered careers with their personal lives and relationships, to varying degrees of success. Charlotte and her staff must combat dangerous threats from abroad as well as from her very own cabinet, and even her husband. Melanie questions whether completely devoting her life to her job is really what she wants. And when Dale becomes the biggest news story of the campaign, she’s suddenly on the other side of the news media.

You’re the former Communications Director for the White House and currently a political media strategist. How much of Eighteen Acres is based on your real life, and the lives of those around you in Washington? Which of your three protagonists are you most like?

The story is about three women who are entirely fictional, but they work in a place I know very well. To the extent that their jobs force them to make difficult trade-offs between their personal lives and their professional responsibilities, I can relate quite well, as can most women I knew in politics. Melanie’s life as a “staffer” is the most similar to my experience in the White House, but she stayed much longer than I did and accomplished more—rising to the post of White House Chief of Staff.


What inspired you to write a novel, and this one in particular? Have you always been a writer at heart?

I first thought about writing a novel about the White House after I’d worked there long enough to realize that people had no idea what life is really like for those who live and work there. I never met anyone who wasn’t fascinated by the place, regardless of their personal political views. Writing about the first woman president was an idea that came to me after the 2008 campaign. Everywhere I went, people wanted to talk about Hillary Clinton and Sarah Palin. It struck me that while their candidacies were unsuccessful; they had touched off a conversation about women in politics that was long overdue.

In a high powered job such as yours, or the women in Eighteen Acres, it seems difficult to maintain a balance with a personal life. How do you manage to do so?

It’s one of the most difficult things about life in the White House for everyone who works there—men and women. I was very fortunate in that my husband also worked in high level positions in the Bush administration and on the Bush and McCain campaigns, so we shared most of our professional experiences.


You largely leave politics out of the story, though it’s set against an intense political backdrop. Why did you decide to write a relatively bipartisan story?

I wanted to write a story about the distance that Charlotte, Melanie and Dale traveled personally and professionally, and I didn’t want the reader to care about which political party they belonged to. It makes me happy when people say to me “I couldn’t figure out for the longest time if Charlotte was a democrat or a republican.”

I believe that the first female president is alive today. Women are coming into their own politically all over the country, in senate races and gubernatorial races. The sorts of intractable problems we face as a country are well suited for the intuitive diplomacy and learned patience of many women leaders.


Charlotte ultimately wins the election because she chooses a running mate from the opposing party. Is that a strategy you would advocate for politicians? Do you think such an arrangement would work?

People hold conventional politics in such low regard that it would seem to me that anything “outside the box” would be worth a try.


Tara seems to have a lot in common with Sarah Palin—they’re both fiery stump speakers with an everyman appeal who aren’t afraid to be blunt. Was this intentional?

I spent enough time in Washington to understand that Washington politicians have a limited appeal to voters. For the campaign section of the story, it was important that the story reflect the public’s hunger for candidates who are plain-spoken, direct and relatable. Tara and Sarah Palin share those traits, but they are two very different women with different stories.


You were a spokesperson for John McCain’s 2008 campaign and served as a campaign advisor to Sarah Palin. What role do you see yourself playing in the next election?

I traveled the country with two candidates for President—George W. Bush in 2003 and 2004 and John McCain in 2008. I treasure both experiences and the opportunity I had to visit every corner of this country and meet people from nearly every state, but it’s a grueling job best left to people who are as eager now as I was then.


What writers and novels have had an impact on you? What are you reading now?

Run and The Patron Saint of Liars by Ann Patchett, The Lovely Bones by Alice Sebold, and The Help by Kathryn Stockett have stayed with me like few other novels I’ve read in recent years. The Devil Wears Prada, by Lauren Weisberger, inspired me to tell a story that was as much about the place, and its limitations and allure, as it was about the characters. Prep by Curtis Sittenfeld was the book I gave to everyone I knew for a couple years because I loved it so much. The Great Gatsby by F. Scott Fitzgerald and The Catcher in the Rye by J.D. Salinger were the first books that changed how I felt about the world.  Right now, I’m reading The Postmistress, by Sarah Blake, Persuasion by Jane Austen, and I have been planning to start the Steig Larsson trilogy for months, but my deadlines keep getting in the way.


Do you see yourself writing another book? You have a very interesting life yourself, would you ever write nonfiction?

I’m working on the sequel to Eighteen Acres now. In it, Tara has her own voice, and we get to take the ride from the New York Attorney General‘s office to the Vice Presidency with her. Dale, Charlotte and Melanie also return. We get to know them better by spending more time with them. I’m enjoying their stories so much, I can’t imagine doing anything else. 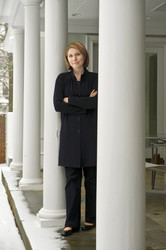