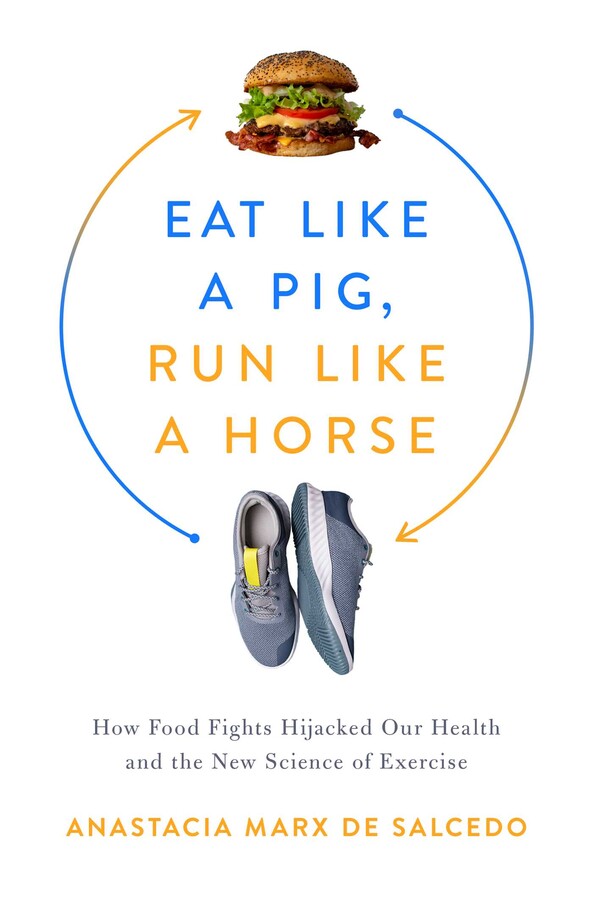 There is no pill. There is no diet. Could it be that our underlying assumption—that what we’re eating is making us fat and sick—is just plain wrong?

To address the nation’s bulging waistline and the disease states associated with it, scientists have conducted a whopping 500,000 studies of diet and 300,000 of obesity. Journalists have written 223,000,000 and 15,600,000 news articles respectively about the topics.

Yet nothing seems to halt the epidemic. It's clear a new approach is needed. Anastacia Marx de Salcedo’s Eat Like a Pig, Run Like a Horse, looks not just to data-driven science, but to animals and the natural world around us.  What she finds will transform the national debate about the root causes of our most pervasive diseases and offer hope of dramatically reducing the number who suffer from these—no matter what we eat.

She starts by chronicling her own medical miracle—she has multiple sclerosis, but discovered that daily exercise keeps it from progressing.  And now, new research backs up her own experience.  This revelation prompted her to ask what would happen if people with lifestyle illness put physical activity front and center in their daily lives instead of diet?

In a fascinating journey divided between personal profiles of patients, mad(ish) scientists, and beguiling animal stories (bats, who fly hundreds of miles weekly, are incredibly disease resistant, much like how aerobic exercise boosts our own immune system), Anastacia shows we need to move beyond our current diet-focused model to a new, dynamic concept of metabolism as regulated by exercise. Suddenly the answer to global good health is embarrassingly simple. Don’t worry about what you eat. Worry about how much you move.

In a few years’ time, adhering to a finicky Keto, Paleo, low-carb, or any other special diet to stay healthy will be as antiquated as using Ayer’s Ague Cure, Daffy’s Elixir, or Dr. Bonker’s Celebrated Egyptian Oil—all popular quack medicines from the 1800s—to cure disease. And just as the 19th-century health revolution was based on a new understanding that the true cause of malaria, tuberculosis, and cholera were tiny germs, bacteria, and viruses, so the coming 21st-century one will be based on our new understanding that exercise is the only way to metabolic health. Fascinating and brilliant, Eat Like a Pig, Run Like a Horse, is primed to usher in that new era.

ANASTACIA MARX DE SALCEDO is a food writer whose work has appeared in Salon, Slate, the Boston Globe, and Gourmet magazine and on PBS and NPR blogs. She’s worked as a public health consultant, news magazine publisher, and public policy researcher. She is the author of Combat-Ready Kitchen and lives in Boston, MA. Visit AnastaciaMarxdeSalcedo.com.