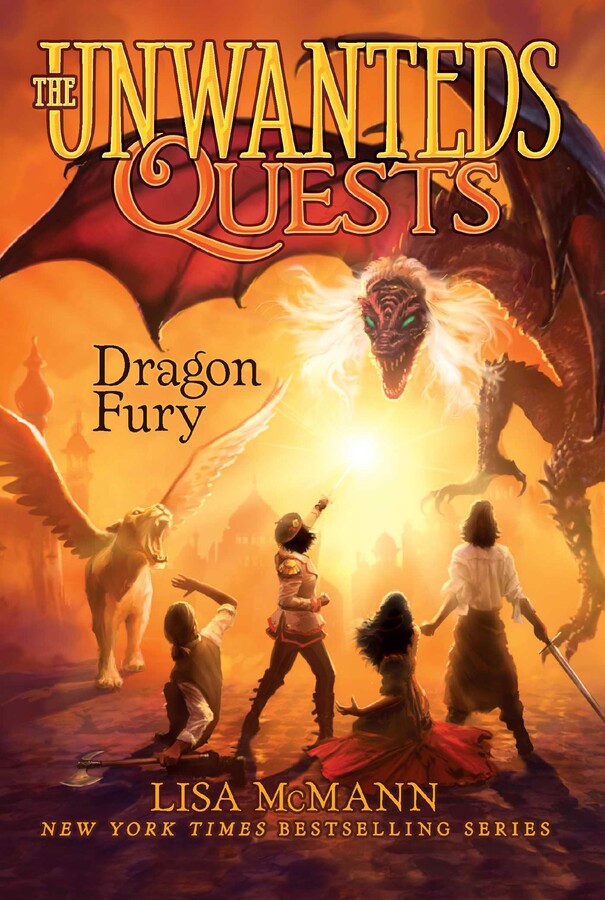 Book #7 of The Unwanteds Quests
By Lisa McMann
LIST PRICE $8.99
PRICE MAY VARY BY RETAILER

Ten years after Alex and Aaron Stowe brought peace to Quill and Artimé, their younger twin sisters journey beyond Artimé in the sixth novel in the New York Times bestselling sequel series to The Unwanteds, which Kirkus Reviews called “The Hunger Games meets Harry Potter.”

As the greatest army ever assembled in the seven islands flies to the land of the dragons, everyone’s mind is haunted by the same thought: Thisbe Stowe betrayed them all.

Thisbe struggles to regain the trust of her brother Aaron and the people of Artimé after one crucial mistake forces her to abandon her intricate plan against the Revinir. Aaron is devastated by Thisbe’s actions and refuses to hear her explanation, feeling a sense of responsibility for the wrong she’s done mixed with his own deep regret and fears over his dark history. Complicating things are Thisbe’s conflicted feelings about the Revinir, leaving her wondering if she allowed herself to get too close to the dragon-woman…and if she really is more evil than good after all.

Risking everything they’d fought for since first being declared Unwanted, the people, creatures, and statues of Artimé and their allies make a final desperate attempt to take down the Revinir and bring peace to their world. But is the Revinir too powerful to defeat? And will the Artiméans ever find out what’s behind that last secret door?

The Chase
Thisbe Stowe had failed to obliterate the Revinir.

Her spell had struck the ground and exploded behind the dragon-woman, knocking her down, but only for a moment. In seconds the Revinir was back up—and furious. While Aaron and Ishibashi exchanged fire with the Revinir, Thisbe and Rohan escaped into the forest of Grimere. But the evil ruler was soon on their tail again, roaring and spraying fire in all directions.

The two dodged the flames from the Revinir’s blasts and kept running. They knew she couldn’t see them, and she couldn’t squeeze her body between the trees to go after them, but her random bursts of fire could still reach the fugitives—and all the timber surrounding them.

“You betrayed me!” the Revinir shouted down. Her voice hitched. To Thisbe, she sounded… devastated. And… possibly in pain?

Between roars and flames, the dragon-woman reached her claws into her mouth and scraped around, trying to dislodge the throwing star that Ishibashi had implanted there moments ago. The first two weapons that had hit her in the forehead had barely nicked her thick skin and bounced off, one of them leaving a trickle of blood. But the metal star in the back of her throat was stuck fast, and the tissue surrounding it was swelling up.

Below, Thisbe’s expression flickered as thoughts about all that had just happened pounded her. What a terrible mess she’d made! She was devastated by her failure to use the obliterate spell properly. Now everything was in chaos. She’d put Aaron and Ishibashi in danger and left them to fend for themselves. And she and Rohan were about to get burned to a crisp.

The two didn’t respond to the Revinir’s shouts. They ran as quietly as they could for a while, then spied a large fallen tree and slid under its branches for cover. Too late, they realized the remaining dead leaves of the tree were brittle—the leaves would catch fast if the Revinir figured out where to aim her blasts. But their smartest option was to stay still and quiet.

“How do we get out of here?” Rohan whispered.

Thisbe looked back the way they’d come. “The desert is back there,” she said, “so that means the road and the crater lake are this way.” She pointed to the south, then frowned. “I think.” Neither of them knew their way through this end of the forest. They were far from the castle and the city of Grimere. The thick expanse of trees spread through the entire center of the land of the dragons: One end was near the castle; the other was close to the cavelands where the ghost dragons dwelled. Dragonsmarche and the crater lake were somewhere between those two points on the other side of the road.

No matter where they were at the moment, Thisbe knew that they had to stay hidden in the thicker parts of the forest in order to keep the Revinir from diving down and snatching them up in her claws or blasting them with her furnace breath. They could hear her circling above the treetops.

“Rohan,” the Revinir called, slurring her words a bit because of the metal star in her throat, “I command you to stop Thisbe! Bring her to the dragon path where I can see her!” Then she muttered, “I should never have ordered him to obey that traitor.”

Thisbe and Rohan’s eyes widened. The Revinir still believed Rohan was under her mind control. She hadn’t yet figured out that they’d been tricking her all this time.

“What should I do?” Thisbe whispered, her chin in the dirt. “The version of Thisbe I’ve been pretending to be would try to take control of the situation. Not apologize for almost killing her, but accuse her of hurting Fifer and telling her she deserved to be attacked. That would startle her, I think, in the right way. Should I tell her that’s what I was reacting to, and declare that I’m sorry I didn’t manage to kill her?” She paused and cringed. What would that lead to? “Or should I try to explain some other way?”

Rohan looked at her, concerned. “I… think it’s over, pria.”

“This whole act you’ve been doing.” He shifted in the detritus under the tree as ants crawled on them. “It’s done. There’s no coming back from what happened.”

Thisbe stayed silent, the blood draining from her face as she tried to comprehend what he was saying. Rohan continued gently. “Do you really think you can go back to her and try to salvage this fake relationship? I just can’t see it ever being repaired. It took you so long to get her to trust you, and after what took place back there—after what you just did to her—the farce is over. You tried to kill her, Thiz. And she’s well aware it wasn’t a mistake.”

Thisbe’s thoughts continued whirring as she attempted to come up with a way to reconcile with the Revinir and keep this going. She’d worked so hard to get here. Poured her heart and soul into this! But the damage had been done. Thisbe dropped her head into her hands. There was no explaining away her attempt to kill the dragon-woman—it had changed their strengthening relationship in an instant, and the Revinir would never forgive her, no matter what story she concocted to try to explain it. Thisbe had messed it up. The fragile trust had been broken. The Revinir was way too hardened, and this betrayal would only harden her more. There was no way to fix it. “It is over, isn’t it,” Thisbe said, resigned. She lifted her head to look at Rohan as the weight of it all came down on her. “Everything I’ve worked toward and all we sacrificed for this… I just messed it up in a single move.”

“You still have one obliterate component,” Rohan reminded her. “Do you want to try again?”

Thisbe peered up around the fallen tree, trying to locate the Revinir above the treetops. “Too many branches. I can’t even see her. I’ll miss again.” She sighed and gathered her thoughts. “We need to focus on getting out of here, I think.”

Rohan nodded. “Yes. Find the others and see about Fifer’s injuries. I hope she’s all right.”

“The Revinir is going to round up her people and dragons,” Thisbe said, thinking about what would happen next. “We need to be ready when she comes after us. Oh,” she moaned, “what have I done? I’ve put everyone in so much danger!” She thought of the interaction with Aaron and Ishibashi. They hadn’t fled with her and Rohan, which meant they probably believed Thisbe had turned on them for real. “They’re going to hate me. And all of this damage… for nothing.”

Rohan reached for Thisbe’s hand and laced his fingers with hers. “We’re going to figure this out,” he said, but he didn’t sound sure.

“And Fifer,” Thisbe whispered, her voice catching. “I wonder what happened to her. We’re going to need her help. And Dev’s.”

Almost as if on cue, an echo of a whisper filled Thisbe’s ear. Water.

Thisbe turned to Rohan. “Did you hear something?”

He shook his head and put a finger to his lips. The random fire strikes were getting closer, and they could smell smoke.

Thisbe was certain she’d heard the word. It had to be from Fifer. Could their telepathic communication system reach this far? And why water? Perhaps, in her injured state, she was in need of a drink. Somebody please give Fifer some water!

In that quiet moment, the crackles of the forest around them grew louder and more consistent. Rohan shifted to look behind them, and he gasped. “The trees are burning,” he said. “Lots of them.”

Thisbe forgot the whisper in her ear and turned sharply to look at the areas of flames growing around them. The Revinir had set the forest of Grimere on fire. And Thisbe and Rohan were trapped in the midst of it.

Lisa McMann lives in Arizona. She is married to fellow writer and musician, Matt McMann, and they have two adult children. Her son is an artist named Kilian McMann and her daughter is an actor, Kennedy McMann. Lisa is the New York Times bestselling author of over two dozen books for young adults and children. So far she has written in genres including paranormal, realistic, dystopian, and fantasy. Some of her most well-known books are The Unwanteds series for middle grade readers and the Wake trilogy for young adults. Check out Lisa's website at LisaMcMann.com, learn more about The Unwanteds Series at UnwantedsSeries.com, and be sure to say hi on Instagram or Twitter (@Lisa_McMann), or Facebook (Facebook.com/McMannFan).

Book #7 of The Unwanteds Quests
By Lisa McMann
LIST PRICE $8.99
PRICE MAY VARY BY RETAILER