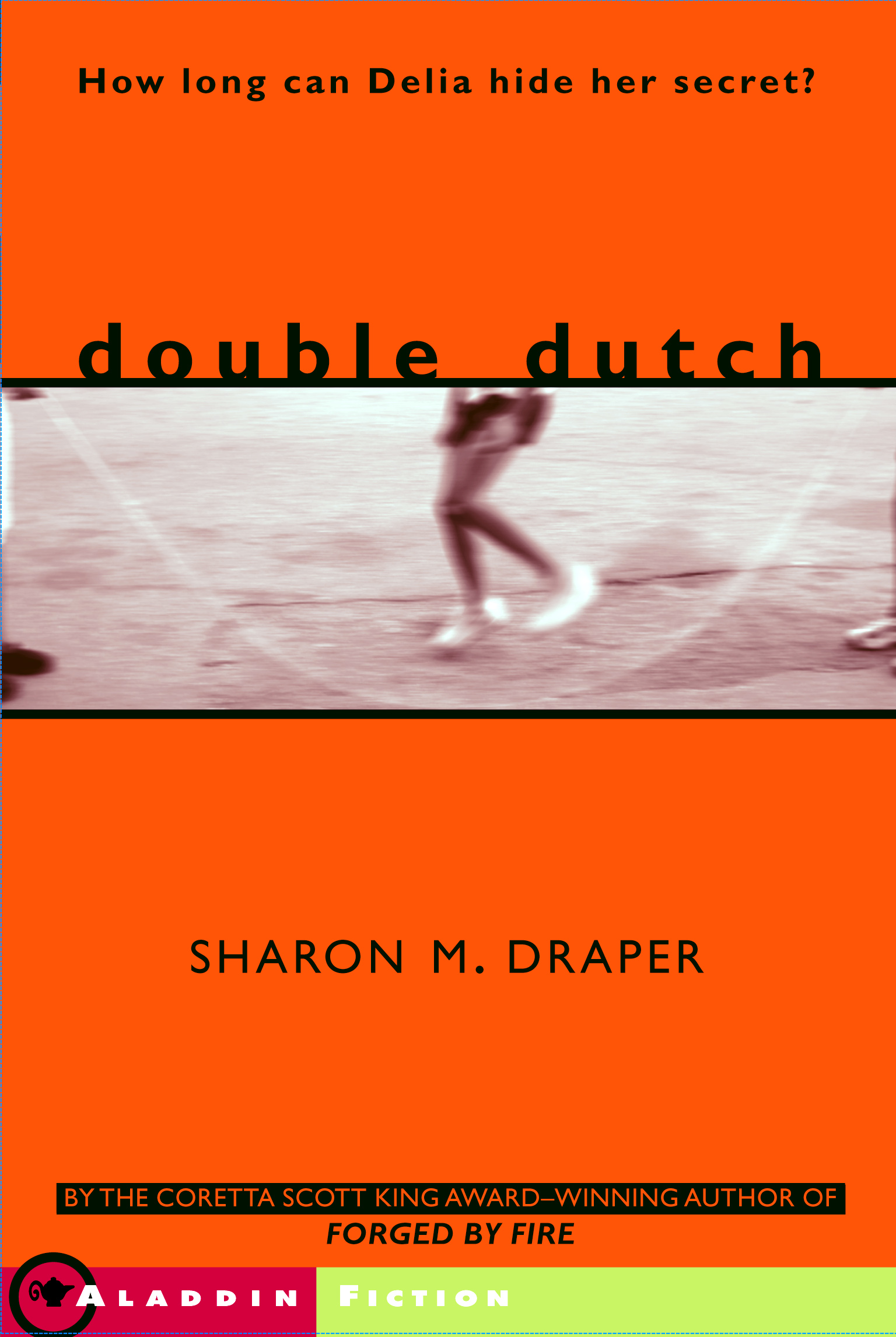 A young girl who loves Double Dutch is caught in the crossfire of the secrets she, her best friend, and the school bullies are keeping in this emotional middle grade novel.

Delia loves Double Dutch more than just about anything, and she’s really good at it—so good she and her teammates have a shot at winning the World Double Dutch Championships. Delia would die if she couldn’t jump—but she’s hiding something could keep her off the team next year.

Delia’s friend Randy has a secret too, one that has him lonely and scared. And while Delia and Randy struggle to hide parts of themselves, their school is abuzz with rumors about what malicious mischief the terrible Tolliver twins—who just may have a hidden agenda of their own—are planning.

Delia and Randy’s secrets collide on what should be the happiest day of Delia’s life, and the collision threatens to destroy their friendship. Why can’t life be as easy for Delia as Double Dutch?

Delia loves Double Dutch jump roping. And she’s good at it. Really good. But Delia is using her success to mask an embarrassing secret: She doesn’t know how to read. Her friend Randy has a secret too. His dad has been missing for weeks and he’s almost out of money, but he’s afraid to ask for help.

These two storylines collide at the World Double Dutch Championship as Delia and Randy are also forced to deal with the very real threat of violence at school, coming from two of their fellow students, the menacing Tolliver twins, who also have a secret: They like to make people scared. But will they act on their threats?

1. Double Dutch begins with a discussion of the characters’ fear of the Tolliver twins. Trace how the idea of fear and the result of fear are developed throughout the story.

2. The twins use intimidation and fear to terrorize the school. Analyze the names Titan and Tabu. Why are their names intimidating? What other factors about the twins make them seem dangerous and deadly?

3. Why is the television program, which the twins appear on an effective way to increase their negative reputation? Discuss the effect of these kinds of talk shows.

4. Yolanda is a humorous character because she tells tall tales and exaggerates. Basically, however, she is a liar. Discuss, by using other characters in the story, how lies and deception can have serious consequences. How can the character of Yolanda be justified if lying is a negative trait?

6. Double Dutch is more than just a story about jumping rope. Discuss how the title can have more than one interpretation. Find all examples of “double” ideas and events in the story.

7. The tornado is a natural disaster that brings about a number of plot developments. Explain how the tornado can be interpreted as a “character” that affects the rest of the characters and events in the book.

8. Families often have difficulties and young people must cope with the situations that arise. Discuss the relationship between the following characters and the strengths of their families:
• Delia and her mother
• Delia and her father
• Randy and his father
• Bomani and his family

10. Delia’s problem is that she cannot read, yet she is obviously very intelligent. Give examples of Delia’s intelligence and show how she was able to escape detection for so long.

11. Double Dutch is a popular team sport. Discuss how organized sports and athletic events are positive activities. Trace how the sport of double Dutch was helpful in the lives of the following characters:
• Delia
• Randy
• Misty
• Yolanda

12. Minor characters are often very important in the development of a story. Discuss how the following characters made a difference:
• Mr. Clifford
• Bomani
• Miss Benson
• Mrs. Parks

13. What predictions can you make about the following?
• Delia and the test
• Delia and double Dutch
• Delia and Randy
• Tabu and Titan at school
• Yolanda and the twins
• Randy and his father

“Sometimes it’s hard to tell the difference between the truth and a lie,” Delia mused. And it doesn’t really matter who believes it.”

“The tension in the small gym sizzled like dangling electric lines—hot and fiery.”

“Soon nothing could be heard but the tapping of her shoes and the whirling of the ropes as they made a breeze in the corner of the gym.”

“It was the test. It was rumbling down the road like a runaway truck, and she [Delia] was standing helplessly directly in its path.”

“He thought about real fear and how it was slipping like smoke under his door, into his space, and throughout his body.”

Write a descriptive paper using one of the four sentences above, or choose another sentence from the book, as a starter. Use vivid verbs and powerful adjectives and adverbs as you write. Use as many of the senses as you can (sight, sound, smell, touch, and taste).

“Clutching the flyer, he [Randy] ran out suddenly, leaving Delia sitting alone on the bleachers, listening to the echoes of all the victories and defeats that gym witnessed—including her own.”

Write a narrative paper from the point of view of the gym. Tell what kinds of games were played, the kind of people that sat there and watched them, the athletes that played, the food that was sold, etc. Take any aspect of “the life of the gym” and develop it.

Write an expository paper on a sport. Tell how the game is played, give some of its rules, and explain why it is successful as an enjoyable physical activity.

“We are instituting some new policies here at school. It is happening all over the country, so don’t think you’re being picked on, and don’t think you’re special. First of all, this weekend a metal detector will be installed at the front door.”

Write a persuasive paper that argues the following point: “Metal detectors are useful and necessary and should be installed in all schools to insure safety.” You may agree or disagree with this statement, but you may only argue one side of the issue.

Write a poem about one of the following topics:
• Secrets and lies
• Fear of the unknown
• Forever friends
• The joy of the jump
• Storms and destruction
• The Dance of divorce

1. Investigate more about the sport of double Dutch. Learn the rules and regulations and learn the steps required. Have a double Dutch tournament at your school.

2. Investigate tornadoes or hurricanes as storms of destruction. Find out how they are formed, what causes them, and what their effects are upon the people that are involved in such a storm.

3. Investigate TV talk shows. How real are the people that appear on the shows, and how are they chosen? Why are such shows popular?

Sharon M. Draper is a three-time New York Times bestselling author and a recipient of the Margaret A. Edwards Award honoring her significant and lasting contribution to writing for teens. She has received the Coretta Scott King Award for both Copper Sun and Forged by Fire, and was awarded the Charlotte Huck Award for Stella by Starlight. Her novel Out of My Mind has won multiple awards and was a New York Times bestseller for over three years, and Blended has also been a New York Times bestseller. She taught high school English for twenty-five years and was named National Teacher of the Year. She now lives in Florida. Visit her at SharonDraper.com.

Kirkus Reviews Delia and her friends are delightful, and the reader is rooting for them all the way. A fast-paced, multilayered story.

School Library Journal The author [creates] vibrant, engaging characters with unique voices....Draper adeptly paints a convincing portrayal of how young people think, act, feel, and interact with one another.

Bulletin of the Center for Children's Books A well-paced and engagingly detailed exploration of a double-sided world of public and private truths that teens will find very familiar.