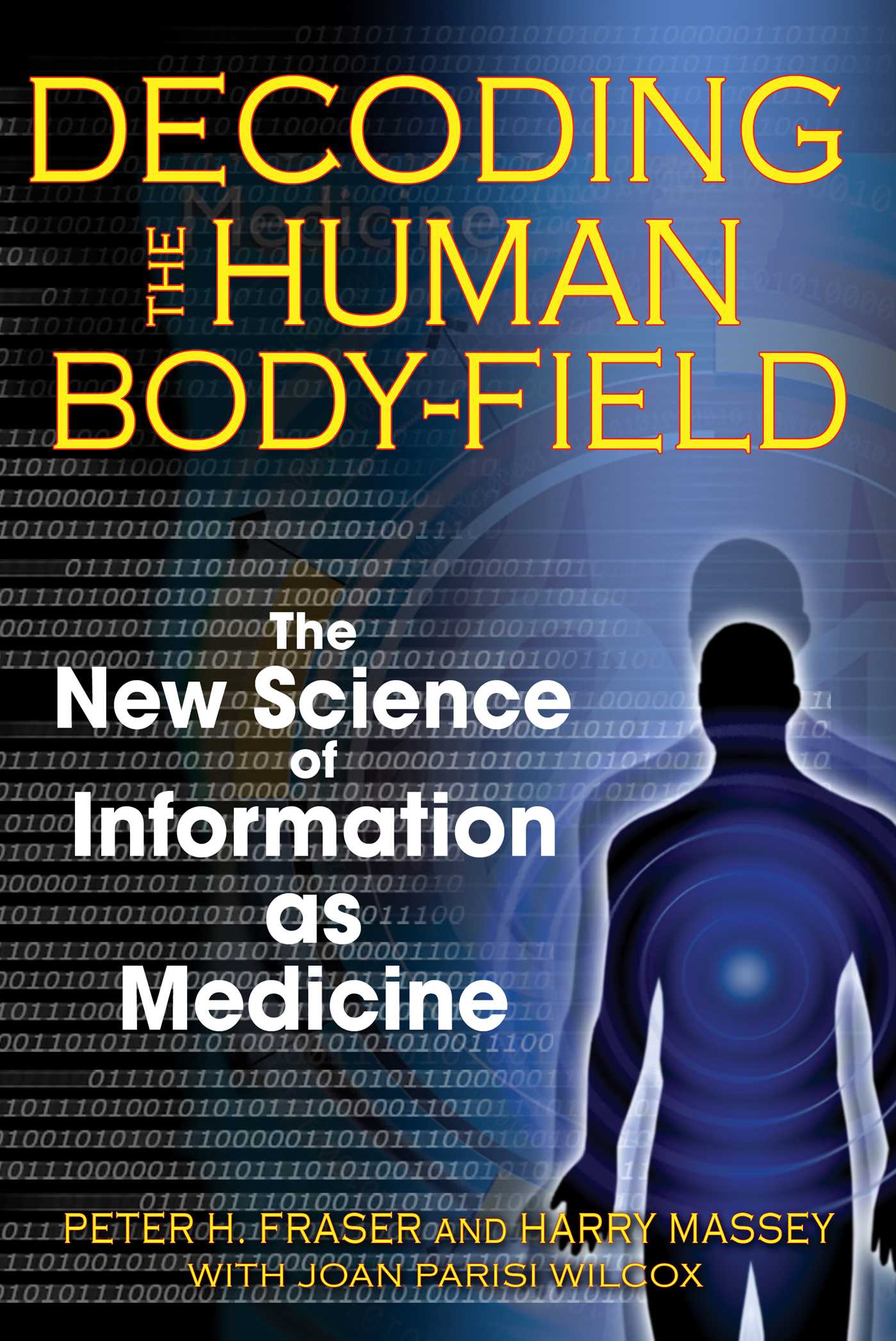 The New Science of Information as Medicine

After decades of research, Peter Fraser has formulated a system that unites the meridian system of traditional Chinese medicine with quantum wave theory to provide the first comprehensive link between the human body’s biochemistry and bioenergetics. He explains that we each have a body-field based on twelve meridian-like channels that process and coordinate information throughout the body and that our health depends on the proper flow and communication of information through these channels.

In Decoding the Human Body-Field, Fraser and Massey describe in detail their revolutionary Nutri-Energetics System, which uses Infoceuticals--liquids infused with organic colloidal minerals that are imprinted with corrective quantum electrodynamic information--to remedy distortions and blockages in the information flow of the body-field. The imprinted information acts as a magnetic signpost to engage the body’s self-healing ability.

THE UNIVERSE OF THE BODY

The annals of medicine are filled with anomalies, those cases that defy rational explanation and baffle even the most brilliant medical minds. For the most part, medical professionals ignore anomalies such as spontaneous remissions, relegating them, if they report on them at all, to the footnotes of journal articles. But we do ourselves a grave disservice by dismissing such anomalies as inexplicable, for they demonstrate in the most visceral way that hidden deep in the recesses of the body are clues about the body-mind’s ability to heal itself.

• A woman suffering from the debilitating effects of decades of multiple sclerosis (MS) is confined to a wheelchair, her legs structurally deformed so that she can stand upright or walk a few steps only while in full leg braces. Her pain worsens until her doctors are forced to sever the tendons to her kneecaps. Over time, some of the tissues and nerves of her legs become irretrievably impaired, her right kneecap slips off center, and her ankles and feet become paralyzed. She suffers with dignity for years, until one night, inexplicably, she hears a voice telling her she can be healed. The next day her legs begin to feel prickly and warm. She is astonished to find she can wiggle her toes. As she examines her legs, she notices that her right kneecap is no longer deformed. She throws off her braces and stands. In astonishment, she runs through the house and even bounds up a flight of stairs. Her various doctors conduct examinations and tests, which reveal that her brain no longer shows the telltale lesions indicative of MS. Her legs have normal reflexes even though tendons have been severed. Her doctors, for the most part, are ecstatic at her startling recovery although they are completely mystified, saying there simply is no medical explanation for it. One of her long-time physicians, however, is so upset, even frightened--because medical science says that MS cannot be reversed or cured--that he dismisses her from his office, calling her a fraud.

• A young girl with lupus, which has no cure and can be controlled only partially through drugs that have numerous side effects, is conditioned to take her medication while smelling roses and tasting cod-liver oil. Over time, as the conditioning is strengthened, her medications are reduced. Finally, after several years, she is able to stop taking her medications entirely, but she receives all the benefits of those drugs simply by being exposed to the scent of roses or the taste of cod-liver oil.

These stories are well documented in medical journals and books, and although they are different in detail they share a subtle commonality: the body used information to change its physical state. Where that information came from and how it organized itself to change the body is open to question, although this book offers one possible explanation.
In the first example, you might be tempted to explain away the remission of MS by citing the mind-body connection; but if the patient’s belief system or mind-set was the mechanism for healing, then it occurred without any conscious effort on the woman’s part. Thoughts, beliefs, hopes, and dreams are intangibles, and to explain how the mind can affect the body we are forced to ask: What is consciousness? The most current research tells us that consciousness is a field, perhaps a quantum field. What does a field do? It conveys energy and information.
At the heart, each of these cases highlights how things as immaterial as mind and thoughts--as fields of information--play a role in health. The fact that these seemingly miraculous stories are real--and there are hundreds of other such stories in the world’s medical literature--assures us that healing is not dependent only on the physical matter of the body. They hint that we should not, as we so often do, relegate to the realm of the metaphysical the mechanisms for interfacing with what appears to be the organizing quantum-level information fields of nature. At the level of the quantum universe, everything is connected and so can affect or be affected by everything else. It appears that information fields order the physical world. Because we are part of that physical world, it is not a huge leap to think that our bodies have inherent links to these underlying energy and information fields.

History records how what was once deemed impossible often turns out to be very possible indeed. The quantum nature of biological water leads scientists back to homeopathy, which has been dismissed as quackery by much of modern, Western science but has helped millions of ill people the world over. Scientific evidence suggests that homeopathy might be correct in its claim that water can be imprinted with information, that water has a memory.31 Homeopathic remedies are made from substances, such as minerals or plants, that are placed in a solution, usually mostly water, which is then succussed (vigorously shaken). The solution is then diluted further and the procedure repeated, often until not a single molecule of the original substance remains in the remedy. All that remains is information. In effect, the remedy retains a memory of information about the healing substance that the body can recognize and use. Research conducted by Nutri-Energetic Systems extended this theory and resulted in the development of our own type of remedies, called Infoceuticals, which are encoded with information but in a way wholly unlike the dilution and succussion method of homeopathy. If experimental evidence from mainstream scientists continues to mount in homeopathy and NES’s favor, conventional scientists might have to revise their opinions--and even their science.
Peter H. Fraser

Peter H. Fraser (1943-2012) began researching the energetics of the human body-field in 1982. He was trained at the International College of Oriental Medicine and created the first accredited degree course in acupuncture at Victoria University in Australia. He is a co-author of Decoding the Human Body-Field.

Harry Massey began collaborating with Peter Fraser in 2001 after a near fatal bout of chronic fatigue syndrome to establish Nutri-Energetics Systems. He is a co-author of Decoding the Human Body-Field..

“The time is ripe for a revolution in Western medicine, and this book tells us the direction it will take. Information is as important as energy in the universe, and Fraser and Massey show that it is as important in the human body as well. As a cosmic information field directs natural processes in the universe, so in the living organism the biofield directs the way the body works: it is the “information-software” that directs the organism’s “energy-hardware.” How information directs organic processes makes the difference between sickness and health. The authors have succeeded in translating this basic insight into effective health-preserving and -conserving tools: the information-based diagnosis and information-coded remedies that will be the basis of medical science in the future.”

– Ervin Laszlo, author of Science and the Akashic Field: An Integral Theory of Everything

“We are indeed on the verge of a Medical and Health Renaissance, one in which a comprehensive and energetic analysis is coupled with an equally comprehensive correction of the imbalances. Conventional medical treatments often carry risks and are less effective in chronic diseases than in acute ones. Fraser’s theory is remarkably inclusive and integrative. NES is safe and efficacy studies will ultimately provide the proof of the pudding.”

– C. Norman Shealy, M.D., Ph.D.,author of Life Beyond 100: Secrets of the Fountain of Youth, founding

“An innovative and fascinating book that describes the biomedical structure of the human body based upon the true energy wave structure of matter. This book lays the groundwork for a new branch of medicine!”

– Milo Wolff, Ph.D., author of Exploring the Physics of the Unknown Universe

"It's like homeopathy, but more high-tech and better targeted, and it also utilises the meridian system of Chinese medicine. . . . This is exciting, far-reaching information for self-healing in our 21st-century world."

"If you are interested in new frontiers in health, or what makes the difference between a being that is alive and one that isn't, then you will not only want to, but need to, read this book."

"In Decoding the Human Body Field, Fraser and Massey cover new ground in the theory that we are made up of energy meridians that directly influence our mind, body, and spiritual health and how to use these fields to create and maintain your natural state of wellness."

"The theory purports the root cause of disease is blockages in the body-field, and presents a new intergrative model of health based on the body's energetic physiology."

"The authors' revolutionary Nutri-Energetics System explains how our health depends on the proper flow and communication of information through 12 meridian-like channels that process and coordinate information throughout the body. Learn how disease occurs when these channels are blocked, and how liquid remedies called Infoceuticals can help restore the information flow to engage the body's self-healing ability."

The New Science of Information as Medicine