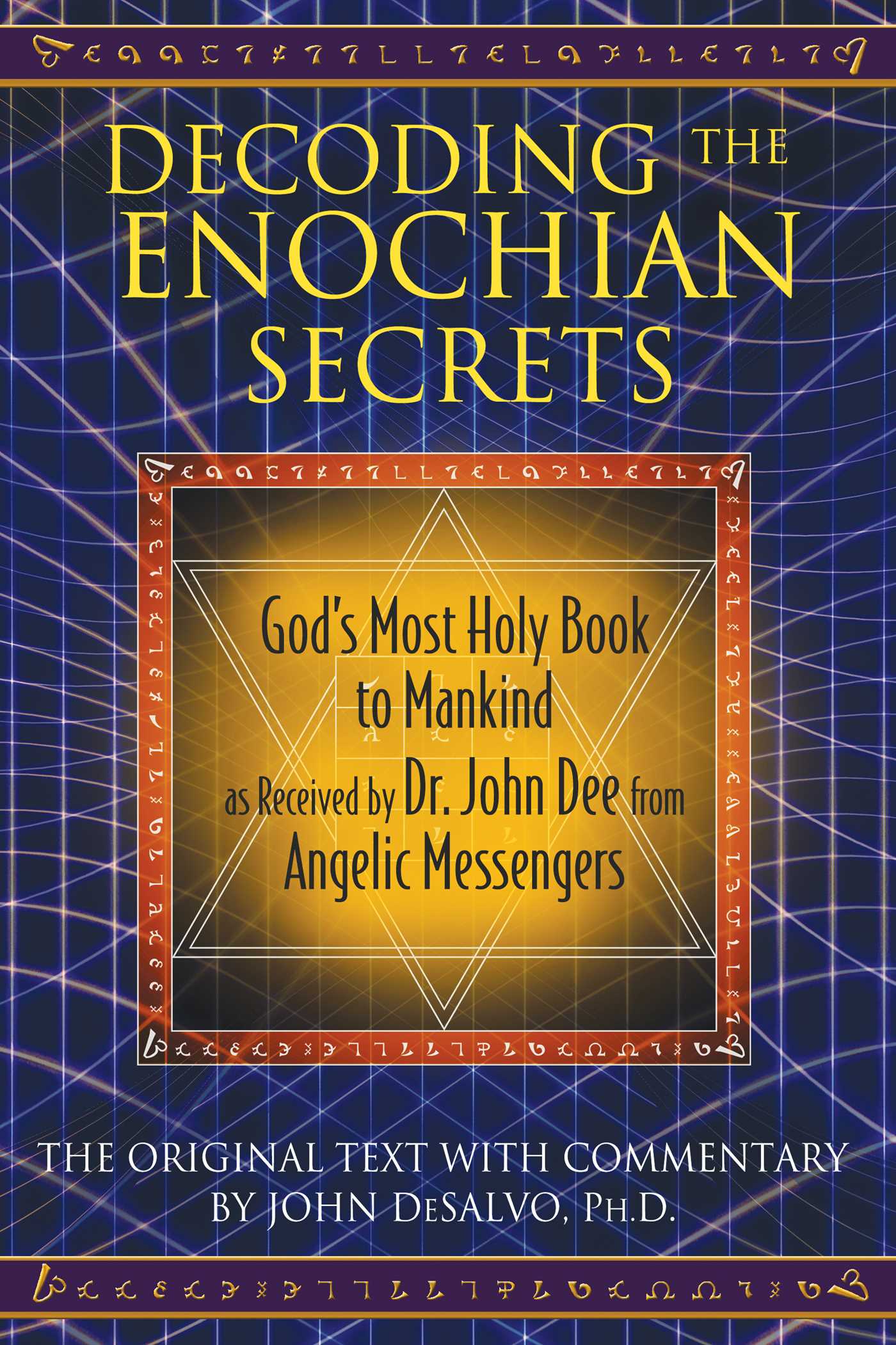 God’s Most Holy Book to Mankind as Received by Dr. John Dee from Angelic Messengers

• Contains the actual and complete Tables of Enoch given to Dr. John Dee by the Angels

• Presents a reconstruction of the possible 49th missing Table of Enoch

Originally considered a vital part of inspirational literature used by the early church, the Book of Enoch never made it into the cannon or accepted books of the Old Testament because of its strange and mysterious content about Enoch’s experiences in the higher realms, or heavens. The real Book of Enoch, which is a set of almost 100 mystical tables, was given again to humankind in the 1580s, when it was conveyed directly by angels to Dr. John Dee, a 16th-century mathematician, scientist, occultist, and the astrologer of Queen Elizabeth I. Called “the most important book ever given to man by God” by Dee’s angelic messengers, the Book (or Tables) of Enoch is said to hold all the secrets of heaven and earth and the physical and spiritual realms.

Decoding the Enochian Secrets reproduces for the first time ever the exact and complete copy of these tables, which are housed in the British Library. The tables are written in the handwriting of Dr. Dee and Edward Kelly, Dee’s assistant and scryer. The tables also include the phonetic pronunciations, written by Dee in the margins, of all the magical Enochian Calls. Covering the history of this Book or Tables of Enoch, John DeSalvo explains the difference between these tables and the apocryphal Book of Enoch and examines how later magicians such as Aleister Crowley used them. Including Enochian Magic Meditations and rituals, Decoding the Enochian Secrets presents the source text to the most powerful form of magic known to mankind.

Subjective Experiences of the Book of Enoch

I experienced this when I was exploring the Twenty-second Aethyr (heavenly realm) during one of my Enochian Mediations. As I was meditating, I entered a very deep state and I felt the presence of God and the holiness of this Aethyr and his angels very strongly.

I saw all of the forty-nine tables (not just the forty-eight) floating in space and it appeared that each leaf was separated from the next one by about an inch. Then the hand of God appeared and his finger brushed or touched the First Leaf and it moved toward the second, and the second brushed the third, and so on and so forth. This was similar to dominos falling in slow motion. As each leaf hit the next one, something like letters--or possibly notes--came out from the leaves. They were numerous and floated majestically in the air.

A good way to visualize this is if you had forty-nine pages of a very dusty book. If you fanned the book, dust would fly into the air. In this case it wasn’t dust that came out, but letters. They moved and floated in a beautiful harmony, almost like a symphony. I knew this symbolized the creation of the universe by God. His finger brushing the First Leaf was like the om point or the big bang, which began everything. His finger was the Word of God. God only touched the First Leaf, and as his hand moved or fanned over the rest of the leaves, the wind that he produced from the hand motion moved the rest of them in a domino effect.

This wind represents “The wind of God” mentioned in Genesis chapter 1. The wind was hovering over the deep before creation began. Some people translate the Hebrew word for wind (ru’ach) as Holy Spirit. So if this wind was the Holy Spirit of God, it was now taking over to finish the process of creating the universe. In my vision, all three persons of the Godhead were present: the Father, the Son, and the Holy Spirit.

Notice that God only touched the First Leaf and no others. This is why the First Leaf was so holy. This vision is consistent not only with Christianity in that the three aspects of God were present in the creation but also Egyptian mythology. The Egyptian god Thoth was considered the tongue of God in which the will of God was translated into speech. Thoth has also been compared to the Logos or the Mind of God. In addition, he was the Egyptian god of magic and writing. He was considered to be the scribe of the gods and was credited with inventing the alphabet.

The letters coming out of the pages would be consistent with a cosmology where Thoth ruled as a god. He was the god who originated all things; the Egyptians believed that he was responsible for making all of the calculations for the establishment of the universe, including the stars, the planets, and the Earth--and everything they contained. It’s very interesting that his female counterpart, Maat, controlled the movement of all things in the universe and was the force that maintained creation, in other words, the wind.

In Crowley’s vision of the Twenty-second Aethyr, an angel plays a pipe and, according to him, the music is wonderful. The angel stops playing and moves his fingers in the air, which leaves a trail of fire of many colors. There is some similarity between this and my vision of God moving his finger in the air and fanning the forty-nine tables.

Crowley also seemed to see visions of the creation and dissolution of the universe. In my vision, I only beheld the creation. (Keep in mind I didn’t read Crowley’s description before I explored the Twenty-second Aethyr.) I was very grateful to the angels for revealing the vision of the Twenty-second Aethyr to me. It was one of the most sublime revelations I have ever received.

“John DeSalvo’s work is truly a significant contribution to our understanding of Dee and Kelley’s amazing experiences.”

“By all accounts, Dr. John Dee played a major role in world history, shaping politics, scientific thought, and occultism for centuries. The highly influential ‘Enochian’ system of magic originated in his ‘mystical experiments,’ of which he kept meticulous records. Yet the centerpiece of his system has never before been published--an enigmatic book that Dee clearly regarded as a monumental gift from God to humanity, communicated through his angels. John DeSalvo has done a wonderful job putting together all the pieces scattered throughout Dee’s manuscripts, including an accessible and systematic introduction. DeSalvo provides valuable suggestions for exploring the book, including meditations and spiritual exercises developed over his many years of investigating Dee’s published and unpublished works. Definitely recommended.”

“Scientist DeSalvo begins with a scholarly, yet understandable, discussion and comparison of the various Books of Enoch. (There is a substantial bibliography to back up the discussion.)”

“. . . Decoding the Enochian Secrets is an important book for anyone serious about the study of Dee, his angels, and their magic.”

“. . . John DeSalvo will blow your mind with his meticulous research and attention to detail . . . you must own this book.”

“. . . an intriguing, detailed and unique survey.”

God’s Most Holy Book to Mankind as Received by Dr. John Dee from Angelic Messengers