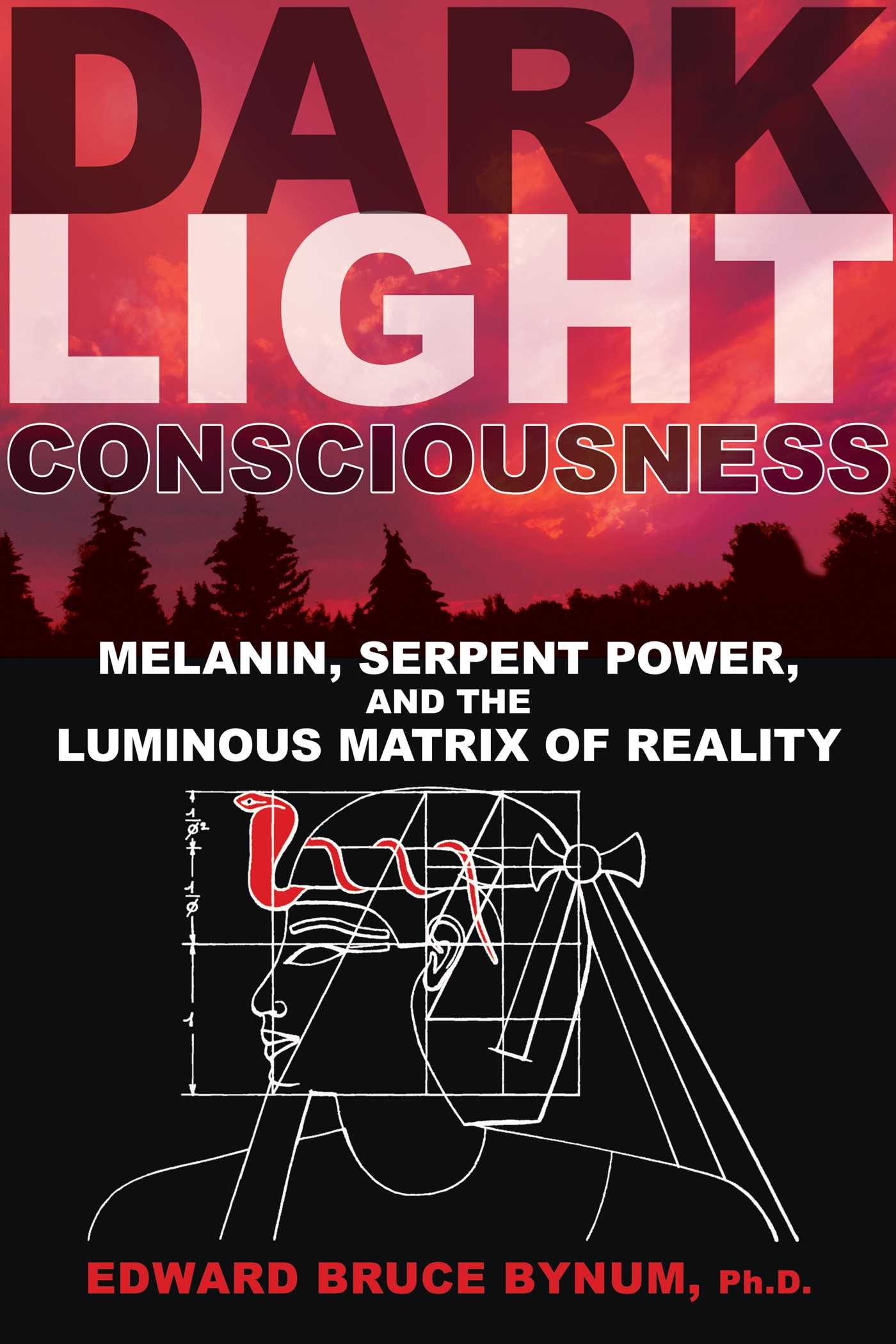 Within each of us lies the potential to activate a personal connection to the superconscious. Called “Ureaus” in ancient Egyptian texts and “Kundalini” in ancient Hindu yoga traditions, our innate serpent power of spiritual transcendence inhabits the base of the spine in its dormant state. When awakened, it unfurls along the spinal column to the brain, connecting individual consciousness to the consciousness of the universe enfolded within the dark matter of space. At the root of creativity and spiritual genius across innumerable cultures and civilizations, this intelligent force reveals portals that enfold time, space, and the luminous matrix of reality itself.

Combining physics, neuroscience, and biochemistry with ancient traditions from Africa and India, Edward Bruce Bynum, Ph.D., explores the ancient Egyptian science of the Ureaus and reveals how it is intimately connected to dark matter and to melanin, a light-sensitive, energy-conducting substance found in the brain, nervous system, and organs of all higher life-forms. He explains how the dark light of melanin serves as the biochemical infrastructure for the subtle energy body, just as dark matter, together with gravity, holds the galaxies and constellations together. With illustrated instructions, he shows how to safely awaken and stabilize the spiritual energy of the Ureaus through meditation practices, breathing exercises, and yoga postures as well as how to prepare the subtle body for transdimensional soul travel.

Chapter 10
OTHER METHODS FOR AWAKENING THE SLEEPING SERPENT

THE SCIENCE OF KRIYA YOGA

A method that integrates both breath control and the circulation of the energy around the spine is found in the Indian version of the science of kriya yoga. Its lineage stretches back through a line of world-renowned yoga masters, from Paramahansa Yogananda to his teacher Swami Sri Yuteswar, back to his guru Lahiri Mahasaya, and on to his own teacher Babaji. Babaji himself rediscovered the lost science that had been the science of India millennia ago, when the events of the Bhagavad Gita were living history before the light of this science passed into another dark age.

The disciplined practitioner learns through pranayama to suspend and energize the breath, coil the life force around and up the spine, focus attention, then detach from the body and move toward union with and within the all-pervading Consciousness. The body may appear lifeless as attention is focused and withdrawn deeply into the interior spine. The practitioner directs the awakened life force to spiral around the six energy centers or charkas, or ANS plexuses, along the spine. This spiral movement is done slowly up and down around the spine, almost like a moving barber pole, from the coccygeal plexus up through the brainstem and crown and back again.

The practice may be deepened by remembering and tuning in to the earth’s core rotational dynamics of spin within the earth itself, which creates coils spiraling upward and out in an experientially realized electromagnetic-gravitational wave to the ever-widening cosmos. This method has an affinity to the earlier mentioned Taoist technique of circulating the light in the major and minor orbits along the spinal line.

A physical meditative posture described in earlier chapters is best for this process. By sensing and visualizing this dynamism moving up from the earth into and around the spinal line, the meditative discipline “harnesses” or yokes this dynamism. The effect seems to create a warp in the fabric of moment-to-moment bodily space-time and move the consciousness principle up and into the realm of “no time.” It is in the realm of “no time”’ that the spirit forms reside.

This practice is executed during spiritual practice many times a day and night. In kryia yoga, a single coil moved around and up the length of the spine is believed to quicken the pace of spiritual evolution. Thirty seconds is believed to equal one year of regular life, so instead of a million human years for a human soul to reach cosmic consciousness it is a much shorter journey.

SRI YANTRA
The Method of Meditation and Absorption

Earlier we described the Sri Yantra as a complex figure emanating from a single point. A single point is surrounded as it progresses outward by a series of triangles interfacing with each other. It was described as a two-dimensional representation of a three-dimensional triangular figure emerging in a fourth dimension in which time is included. This Sri Yantra is associated with the nine openings, or “gates,” of the body. The triangle is an enclosed and enfolding space that opens out in manifestation. Perhaps the most accessible text on this ancient method is the commentary of the polymath Bhaskararaya in Bhavanopanisad. The innermost dot of these enfolding triangles represents a kind of “zeropoint energy field,” the information field that underlies the manifestation into this dimension of time and space itself.

Progressive meditation on the Sri Yantra begins at the center, but it can also begin at the outskirts. When it begins at the outer edges, meditate upon it moving gradually through various triangles toward the center. Then focus on the center moving progressively outward toward the edges. The practitioner does this to the point of being completely absorbed in the progression inward and outward, of involution and evolution and involution again.

Become completely absorbed in this while, at the same time, close the nine gates of the body physically in combination with one of the appropriate forms of breath control. This leads to a radical meditative experience and eventually the transcendence of experience itself. Pratyahara, or sensory withdrawal and self-absorption, occurs naturally in the process of this meditation upon involution and evolution, the wave in and the wave out of manifestation itself.

If this proves difficult then approach it from another direction. Establish yourself in meditation.

SRI YANTRA MEDITATION
With the eyes focused slightly above your head, visualize the bottom of a triangle. Go up into the triangle and visualize another triangle within it at 90 degrees. Then progress further upward. It will seem as though the triangles open within each other.

At times the image will appear external to you, at other times it will feel inside of you and you inside of it. During the practice, a quiet and spontaneous sensory withdrawal or pratyahara occurs. At the ninth level, the Sri Yantra will be completed. For some of you there will spontaneously appear the image and internal perception of two triangles flowing or penetrating each other in the shape of a star. This is the “celestial vehicle,” or Merkabah, used by the ancient wisdom traditions for spirit travel and communion with “intelligences” not limited to the four conventional dimensions of human experience. Approach it with care.

Practice these mental manipulations at other times. Play with the visualization. Give yourself time. Have fun. Eventually you will be able to master it. It will occur spontaneously in dream sleep. Associate it in meditation with the seed sound/vibration “OM,” and eventually something luminous will dawn within you.
Edward Bruce Bynum

Edward Bruce Bynum, Ph.D., A.B.P.P., is a clinical psychologist and the director of behavioral medicine at the University of Massachusetts Health Services in Amherst. A student of Swami Chandrasekharanand Saraswati and a winner of the Abraham H. Maslow award from the American Psychological Association, he is the author of several books, including The African Unconscious. He lives in Pelham, Massachusetts.

“In this fascinating book, Edward Bynum throws down a gauntlet to science that may very well result in the most revolutionary research ever done on consciousness. His groundbreaking ideas challenge not just what we know about enlightenment but the very nature of light itself and--more importantly for each and every one of us--our journey toward it.”

– Teri Degler, author of The Divine Feminine Fire and The Fiery Muse

“Edward Bruce Bynum remains the preeminent and most prolific behavioral health scientist who can raise our higher state of consciousness by linking modern concepts of melanin, contemporary views on meditation, and ancient mysticism.”

– T. Owens Moore, Ph.D., professor of psychology at Fayetteville State University and author of The Sc

“Edward Bynum has written a complex guide that brings together ancient and modern sciences, ethics, biology, spiritual teachings, and subtle physiology and provides specific energy and meditation practices to activate and explain the awakening of kundalini energy and its highest functioning in an individual. He has introduced ancient tantric understanding of subtle body energies rarely available to the public, along with practices that allow one to discover their existence for themselves. This book will be highly useful for personal growth and offers a foundation for new research and experimentation that can bring science and the realization of consciousness together. A true alchemy of the body and the spirit.”