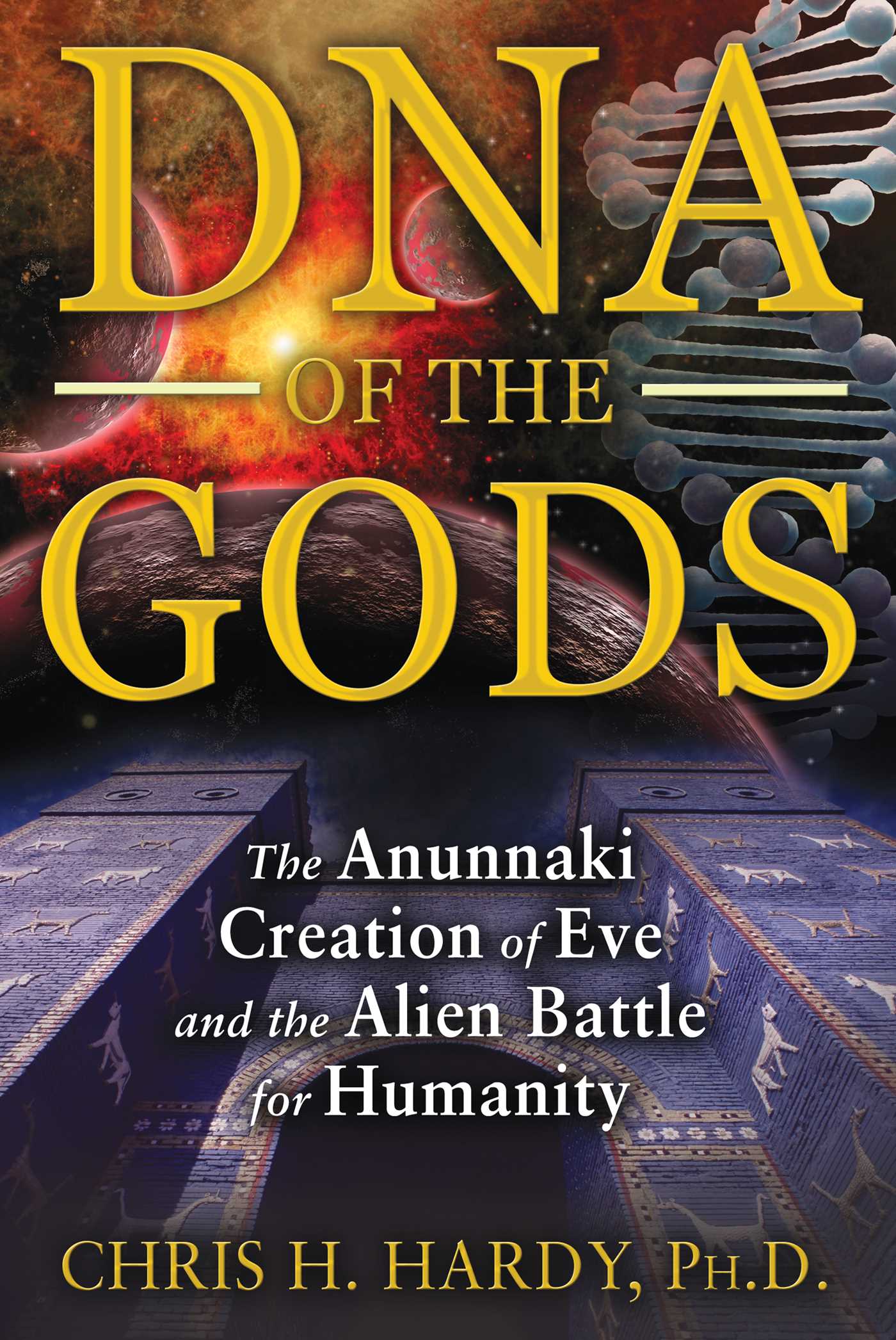 • Explains the genetic engineering of humanity by an Anunnaki scientist Ninmah

• Shows how the concepts of sin and the inferiority of women arose from Enlil’s will to keep humanity underdeveloped, clashing with Enki’s and Ninmah’s plan to make us equal in intelligence

Further developing the revolutionary work of Zecharia Sitchin, Chris Hardy shows that the “gods” of ancient myth, visitors from the planet Nibiru, created us using their own “divine” DNA--first through DNA extraction from their own ribs’ marrow and later by direct relations with early human females. Drawing upon multiple sacred texts, Hardy details the genetic engineering of humanity by Anunnaki scientist Ninmah, with the help of Enki and Hermes. She reveals how Ninmah’s first female human creation, Tiamat/Eve, contained more alien DNA than the earlier male one, Adamu, and how the biblical Noah represents the perfection of her work.

Examining the war between Anunnaki brothers Enki and Enlil, Hardy reveals how the concepts of sin and the inferiority of women were born out of Enlil’s attempts to enslave and then wipe out humanity, repeatedly thwarted by Enki and Ninmah. The author further explains how the sacred sexuality taught to humans--still seen in Tantric practice--became suppressed millennia later by the patriarchal concept of original sin and how innocent Eve took the blame for the expulsion from Eden and fall from Grace.

Showing that the god who created us was not the same god who expelled us from Eden, Hardy explains that there will be no apocalypse because the Good/Evil duality has never truly existed--it has been only enemy gods fighting and implicating humanity in the wake of their own competition for power. With a full psychological understanding of how the ancient “gods” have shaped humanity’s ongoing history of conflict, we can move beyond the framework of “(my) Good versus (your) Evil” imposed by Enlil and begin to steer our own planetary destiny.

Chapter 3
THE GENETIC ENGINEERING OF THE ADAMIC HUMANITY

THE THIRD LEAP IN EVOLUTION AND THE EXIT OF EDIN

When Anu and Enlil voted in favor of the genetic engineering of earthborn hominids, it was with the aim of creating slave workers, lulus. In the mind of Enlil, there was only one purpose for the lulus: to toil in place of the Nibirians, first in the gold mines and then in Sumer as servants.

Enlil had one of the most extreme Anunnaki profiles: violent and prone to anger, indignant, jealous, and highly self-centered. He had minimal scientific or technological skills and little reflective capacity.

For Enki--the chief scientist who had, in contrast, a powerful mind and astounding reflective capacities--it was immediately evident that such workers had to be intelligent enough to understand their tasks and that they should have the capacity to proliferate so that they were in good supply. For Ninmah too it did not make sense to keep cloning males (a task demanding huge attention, effort, and time) when nature has solved the problem of both durability and multiplication of a species by sexual reproduction.

But, as I understand it from studying the texts, this seems to be only the baseline of Enki’s and Ninmah’s multilayered thinking: the official one in accordance with the assembly’s decision to fashion workers but nevertheless anticipating future needs.

Yet there’s much more to Ninmah’s and Enki’s overall purpose, because, if they had only this aim in mind, they would have given the ability to procreate to the earthlings, but not such an open and deep intelligence that they could entrust their science to them. This is why they kept perfecting the earthlings until Adamu and Tiamat were endowed with self-awareness and the capacity to procreate.

What is interesting is that Adamu and Tiamat, as well as the first batch of male clones of Adamu and female clones of Tiamat, had sexual organs, but they were not able to procreate until Ningishzidda performed the genetic adjustments when they were already adult.

This is where, according to Zecharia Sitchin in his The Lost Book of Enki, the infamous rib comes into play. Ningishzidda first administered anesthesia to the four bodies of Ninmah, Enki, Adamu, and Tiamat. Then he extracted the life essence (DNA) of Enki from his rib’s bone marrow and grafted it in the rib of Adamu. Similarly, he extracted the DNA of Ninmah from her rib’s bone marrow and grafted it into the rib of Tiamat. The genome (the Tree of Life) of the first couple was thus optimized: this is the third leap in evolution. Says Sitchin, “To their Tree of Life, two branches have been added.”

And this is when Tiamat and Adamu start having a sense of self and self-reflective capacities. They are now conscious of their sexuality and adorn (not “cover”) their loins. When Enlil, by accident, sees this, he becomes furious and expels them from Edin, despite the fact that they were in the land of Enki, nearby his city of Eridu. Sitchin says about this event:

Unbeknownst to Enlil, and with the connivance of Sud [Ninmah], Enki contrived to give the creature one more genetic twist: granting to the hybrid beings . . . the ability to have offspring, the sexual “Knowing” for having children. The event is echoed in the biblical tale of Adam and Eve in the Garden of Eden, and although the original Sumerian text of the tale has not yet been found, a number of Sumerian depictions of the event were indeed discovered. They show different aspects of the tale: the Tree of Life; the offering of the forbidden fruit; the angry encounter that ensued between the “Lord God” and the “Serpent.” Yet another shows Eve girdled in a garment around her loins while Adam is still naked, another detail related in the Book.

In this tablet Sitchin is referring to, next to the representation of Enki is written “god who solves secrets” or “god of the Deep Mines”--and in the original Hebrew text of Genesis, the “tempter” is called Nahash, which means “serpent” but also “He who solves secrets,” as well as “he who knows metals.” Thus the serpent in Sumerian texts is just a symbol of knowledge and wisdom--Enki being sometimes called “The one who knows all.” In the same way, Anu is called “Bull of Heaven,” and later King Richard I will get the epithet “The Lion Heart” to signify his bravery during the Third Crusade. We see here how an epithet representing a quality (serpent = knowledge and wisdom) is later translated into a negative quality (serpent = the tempter, the insidious scheming Satan). Yet the translation of “god who solves secrets” into the Hebrew was perfectly correct. Lyn Bechtel noted in her 1993 text Rethinking:

The completely negative symbolism of the snake in the traditional [“sin and Fall”] interpretations is incompatible with snake symbolism in the ancient Near East and in Israel during the monarchy. Most scholars agree that this negative snake symbolism was introduced in the second or third century BCE.

The serpent as the Knower is the emblem of Enki and of two of his sons, Ningishzidda and Marduk. The Sumerian representations of Ningishzidda show already what will become his Greek emblem as Hermes’ caduceus (we will study these symbols in depth farther on). As for Marduk, he is called by Enlil “the great Serpent” in the second Pyramid War.

With the genetic upgrading that took place in Edin we learn that we humans have in us the DNA of both Enki and Ninmah as well as Ningishzidda/Hermes. Could it be that, in choosing the picture of the double-helix of the DNA as an emblem for himself and Ningishzidda, Enki was signaling to all later generations of the Adamic humanity from which gods precisely we had inherited our own DNA?
Chris H. Hardy

Chris H. Hardy, Ph.D., holds a doctorate in ethno-psychology. A cognitive scientist and former researcher at Princeton’s Psychophysical Research Laboratories, she has spent many years investigating nonlocal consciousness through systems theory, chaos theory, and her own Semantic Fields Theory. The author of many research papers and published books, including DNA of the Gods and The Sacred Network, she lives in France.

“Some of the strangest theories are also the most fascinating, especially if they involve human nature and deep mysteries from the ancient past. Anyone who thinks they really understand reality doesn’t have a clue. Enjoy this thoughtful and creative exploration of human origins and what it is to be us.”

“We need writers like Chris Hardy to give us space to think beyond the pale; to draw us into the unknown and challenge our assumptions. To read her work is to realize how mundane the life of the mind may be for the rest of us who may not be brave enough to explore the meaning of our ancient dreams. She is chasing the shadows of our humanity and for that we can be grateful.”

“In this thought-provoking and remarkable book, Chris Hardy illustrates the way the role of women in societal development has been marginalized in modern times. She uses ancient mythological accounts that demonstrate that a more equitable and more feminist approach was once in vogue but was eclipsed when male-dominated writers co-opted recorded history. Hardy couples this well-founded assertion with the provocative suggestion that human evolution was given a jumpstart by extraterrestrial agencies. Readers may agree or disagree with Hardy, but they will never be bored as they wend their way through DNA of the Gods.”

“Excellently researched and easy to read, this book honors the work of Zecharia Sitchin with updated science and philosophies proving ancient man was genetically manipulated by an alien hand.”