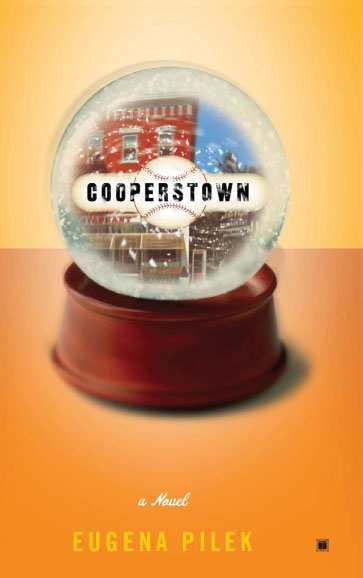 By Eugena Pilek
LIST PRICE $22.95
PRICE MAY VARY BY RETAILER

An exceptional debut novel lovingly probes the values of faith, family, community, and America's favorite pastime, baseball -- from a captivating new voice in contemporary fiction.
Cooperstown, New York, in 1979 (the year Willie Mays was inducted into the Baseball Hall of Fame), is a close-knit community where gossip is sovereign and baseball is the great American religion. Seen through the eyes of Dr. Kerwin Chylak, a psychiatrist who has recently moved to town with his family, the citizens of Cooperstown are a wildly eclectic team of players that includes an alcohol-befuddled mayor determined to be more than a footnote to history; the town busybody who pitches missiles of miscommunication; a disillusioned ex-ball player turned warrior; and a sports writer who detests baseball. Little do these ordinary people know that they are about to be thrust into an extraordinary situation as the construction of a baseball theme park threatens their quaint way of life. Teetering on the cusp of a decade in which commercialism could swallow them whole, they are spurred to action -- with unexpected, poignant, often hilarious results.
Full of baseball legend and lore and featuring an unforgettable cast of unconventional characters, Cooperstown probes the hearts and minds of small-town America. It is a celebration of life in all its struggles, sorrows, and sudden slides into victory.

By clicking 'Sign me up' I acknowledge that I have read and agree to the privacy policy and terms of use. Free ebook offer available to NEW US subscribers only. Offer redeemable at Simon & Schuster's ebook fulfillment partner. Must redeem within 90 days. See full terms and conditions and this month's choices.
Reading Group Guide -- Eugena Pilek's Cooperstown
1) At the end of the first chapter we are told that Frank couldn't stand missing history. Now that we know the contents of the document and what he and his pals believed was on it, what history do you believe Frank was referring to? In what sense would he have been missing out on history?
2) In the beginning of the book Chylak had a different opinion about the residents of Cooperstown, how do you think his opinion has changed? Has your opinion about the residents of Cooperstown changed as well?
3) Discuss the father-son relationships between the residents of Cooperstown. Do you see any similarities between them? Although new to the town is Chylak's relationship with his son in any way similar to that of the fathers and sons raised in Cooperstown?
4) Considering the town of Cooperstown relies heavily on its baseball history and attractions to bring in tourists to further their economic growth discuss why some residents were so against the construction of a baseball theme park. Do you agree or disagree with their point of view?
5) Frank tells the tourists on page 5 that Cooperstown is "a town built upon myths". This same analogy is used to describe Manny on pg 51. Discuss the similarities between Manny and Cooperstown. Why would this analogy be used to describe the town and a man like Manny?
6) On page 9 Pilek tells us that "In Frank's mind, they were their own inaugural club, the real McCoys, the last of the Mohicans...ever waging an eternal war against the Coopers, determined to one day run the town". Judging how things progressed in the novel would you say they were successful at this? Knowing what was in the document would you say the actions they took in order to keep the contents secret benefited the town or caused more harm than the actual revelation would have?
7) How would you characterize Dusty's self-image? What events and circumstances in her life have contributed to her sense of self awareness most particularly with her looks?
8) How do you interpret the novel's ending? Where there are any passages throughout the novel that may have hinted towards what the document consisted of? How destructive could this document have been for Cooperstown? Where the results of the content what you expected?
9) If you were in Manny's situation having gone though all he went through and knowing the secret he knew do you believe your reaction would've been similar? Do you think his departure from baseball was logical?
10) Discuss Daulton's inability to publish what was revealed in the document. If placed in a similar situation would you have published it?
11) What do you make of Manny giving the document to Chylak? Why do you believe he preferred to preserve it by passing it along to the town's psychiatrist instead of burning it that night with Daulton?
12) Would you say the story's ending was a happy one? Discuss the resolutions that were made.
Eugena Pilek

Eugena Pilek is the books editor for First for Women magazine and a book reviewer for The Washington Post's Media Mix. A native of Cooperstown, she lives in New York City.

"Cooperstown is a loopy tribute to both baseball and the small-town upstate novel."
-- Stewart O'Nan, coauthor of Faithful and author of The Good Wife

By Eugena Pilek
LIST PRICE $22.95
PRICE MAY VARY BY RETAILER