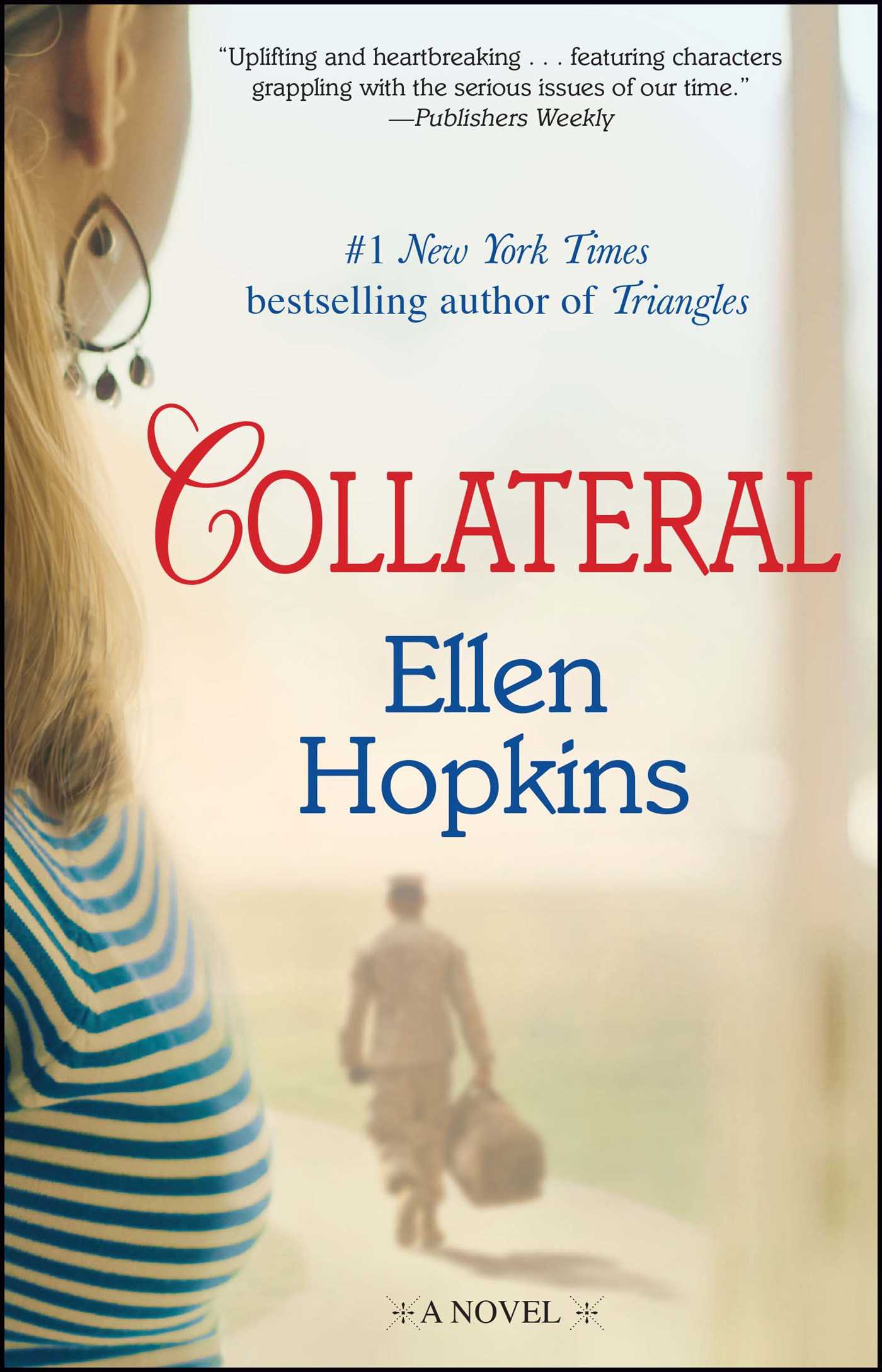 From the New York Times bestselling author of Triangles comes an exquisitely told story about a young woman torn between passionate first love and the gripping realities of war.

Meet Ashley, a graduate student at San Diego State University. She was raised in northern California reading poetry and singing backupin her best friend’s band. The last thing she ever expected was to end up a military wife. But one night, she meets a handsome Marine named Cole. He doesn’t match the stereotype of the aggressive military man she’d always presumed to be true; he’s passionate and romantic, and he even writes poetry. Their relationship evolves into a deeply felt, sexually charged love affair that goes on for five years and survives four deployments. Cole desperately wants Ashley to marry him, but when she meets another man, a college professor, with similar professional pursuits and values, she begins to see what life might be like outside the shadow of war.

Written in Ellen Hopkins’s stunning poetic verse style, Collateral captures the hearts of the soldiers on the battlefield and the minds of the friends, family, and lovers they leave behind. While those at home may be far from the relentless, sand-choked skies of the Middle East and the crosshairs of a sniper rifle, they, too, sacrifice their lives and happiness for their country at war. And all must eventually ask themselves if the collateral damage it causes is worth the fight.

. . . Cole’s battalion has already deployed twice to Iraq and once to Afghanistan. Draw-down be damned, Helmand Province and beyond

looks likely for his fourth go-round. You’d think it would get easier. But ask

me, three scratch-free homecomings make another less likely in the future.

By clicking 'Sign me up' I acknowledge that I have read and agree to the privacy policy and terms of use. Free ebook offer available to NEW US subscribers only. Offer redeemable at Simon & Schuster's ebook fulfillment partner. Must redeem within 90 days. See full terms and conditions and this month's choices.
This reading group guide for Collateral includes an introduction, discussion questions, and ideas for enhancing your book club. The suggested questions are intended to help your reading group find new and interesting angles and topics for your discussion. We hope that these ideas will enrich your conversation and increase your enjoyment of the book.

Ashley Patterson, a graduate student and poet, never expected to become a military wife. But she and her best friend, Darian, fall for soldiers, both on separate paths to war. Darian and Spencer marry right away, for better or for worse, but Ashley and Cole choose to take it slower. Five years and four deployments later, Ashley is still passionately connected to Cole—her poetic, sensitive Marine. But as she looks back on the history of their relationship, she realizes that he has changed—the fear and tedium of war are starting to take a toll. Ashley’s doubts grow as Cole rises in the ranks, and she finds herself drawn to her poetry professor, Jonah, a laid-back surfer who encourages her to follow her dreams and never settle for anyone else’s ambitions. As Cole’s suppressed fury comes to the surface, Ashley must find the courage to fight her own battles.

1. Discuss what it was like to read Collateral, a novel in verse. How long did it take you adapt to this narrative form? When did Collateral feel especially poetic, and when did it take on the fast-paced style of prose?

2. In “Poets Write Eloquently,” Ashley observes that poets try to capture the horrors of war “using nothing / more than a few well-crafted words.” (MS-pg. 1) What aspects of war does the poetry of Collateral manage to depict? What kinds of trauma can no poet capture in words?

3. Consider how Collateral alternates between “Present” and “Rewind” sections. How did this switch between past and present enrich Ashley’s story?

4. Choose your favorite poem by Cole Gleason and compare it to Ashley’s “Rough Day at the VA,” which Jonah thinks is her best. What are some of the similarities between Cole’s style and Ashley’s? How do their poems differ in style, subject, and imagery?

5. Recall your first impressions of Darian, Ashley’s best friend. What did you think of Darian’s preconceptions about marriage? How did your understanding of Darian’s troubles change later in the novel? Did you gain or lose respect for her by the end of Collateral? Explain your answer.

6. “But there was something new under / Cole’s skin. Some dark shadow.” (MS-pg. 442) Name some of the warning signs of Cole’s “dark shadow” that Ashley fails to recognize.

7. Discuss the role that family history plays in Ashley and Cole’s relationship. What dark secret has Ashley’s mother been hiding, and how does her revelation affect Ashley’s feelings about marriage and the military? How do nature and nurture—a family history of violence and the dangers of the Middle East—affect Cole’s temper?

8. Cole reassures Ashley, “I’ll always come back to you, Ashley. / You are my collateral. My reason / to return no matter what. Believe it.” (MS-pg. 212) Discuss the multiple meanings of the word “collateral.” What kinds of danger and hope does the title of the novel imply?

9. Consider how gender issues affect the relationships in Collateral. How do Ashley and Cole’s views of male and female roles clash? When does sexual intimidation or jealousy threaten their relationship? Which couples in the novel have a more balanced relationship?

10. Jonah tells Ashley, “When love evolves / from friendship, it must be stronger.” (MS-pg. 379) Do you agree with Jonah’s thoughts on friendship and love? Why or why not? Discuss how his theory applies to the men in Ashley’s life: Cole, Jaden, and Jonah.

11. The sexual chemistry between Ashley and Cole is undeniable. Which of their love scenes is the most memorable? Why do you think they are so intensely attracted to each other?

12. Reflecting on the past five years, Ashley realizes that while Cole’s maturity was imposed on him by the military, “My growth came from self discovery. / Choosing one path, journeying a while, / changing direction.” (MS-pg. 458) Compare how Ashley and Cole have grown over the years of their relationship. What has Ashley discovered about her strengths and weaknesses? How has Cole’s military career affected his maturation?

13. Consider Ashley’s career ambitions. Why did she initially choose to pursue a social work degree instead of teaching? What leads her to change her mind and study poetry?

14. The novel concludes with a “Fast Forward” section rather than a “Rewind,” and is set a few days before school begins. What is the effect of this “Fast Forward?” What painful moments has Ashley skipped over in her narration?

15. Discuss how the wars in Iraq and Afghanistan are portrayed in Collateral. Which characters support the war and which oppose it? How does the novel manage to portray different sides of a difficult conflict?

1. Check out IndieFeed, a podcast that collects spoken-word performances. Search for some of Ashley’s favorite poets— Rachel McKibbens, Alix Olson, and Taylor Mali— and listen to their dynamic performances here: www.indiefeedpp.libsyn.com.

2. Ashley and Darian used to play a game called “What If:” “One of us asks a ‘what if’ / question. The other promises / to answer truthfully.” (MS-pg. 91) Play a book club version of “what if” asking other members which of their favorite books they would take to a desert island, pack on a long vacation, or hide under the mattress.

3. Set the mood at your book club meeting with the Dixie Chicks’ album Fly—Ashley and Darian’s old favorite. Find it in your local music store or buy it online, and don’t forget to sing along to “Cowboy Take Me Away.”

4. Consider donating time or funds to a veterans’ organization in your area. Visit www.volunteer.va.gov/apps/VolunteerNow/ to find a veterans’ facility near you.

5. Visit Ellen Hopkins’s website, www.ellenhopkins.com, to learn more about the author’s life and work, and to read her helpful tips for aspiring writers.

Ellen Hopkins is the #1 New York Times bestselling author of numerous young adult novels, as well as the adult novels such as Triangles, Collateral, and Love Lies Beneath. She lives with her family in Carson City, Nevada, where she has founded Ventana Sierra, a nonprofit youth housing and resource initiative. Follow her on Twitter at @EllenHopkinsLit.

“Uplifting and heartbreaking... featuring characters grappling with the serious issues of our time.”

“Searing. . . . Hopkins examines the highs and lows of the mercurial nature of a relationship with someone whose first loyalty is to his (or her) country.”

“Hopkins examines the difficulties often overlooked in military marriages, such as limited communication, infidelity, worry over injury, loneliness, and the physical and mental issues of returning veterans. . . . The story will appeal to many readers.”

“Hopkins brings much passion to her work.”