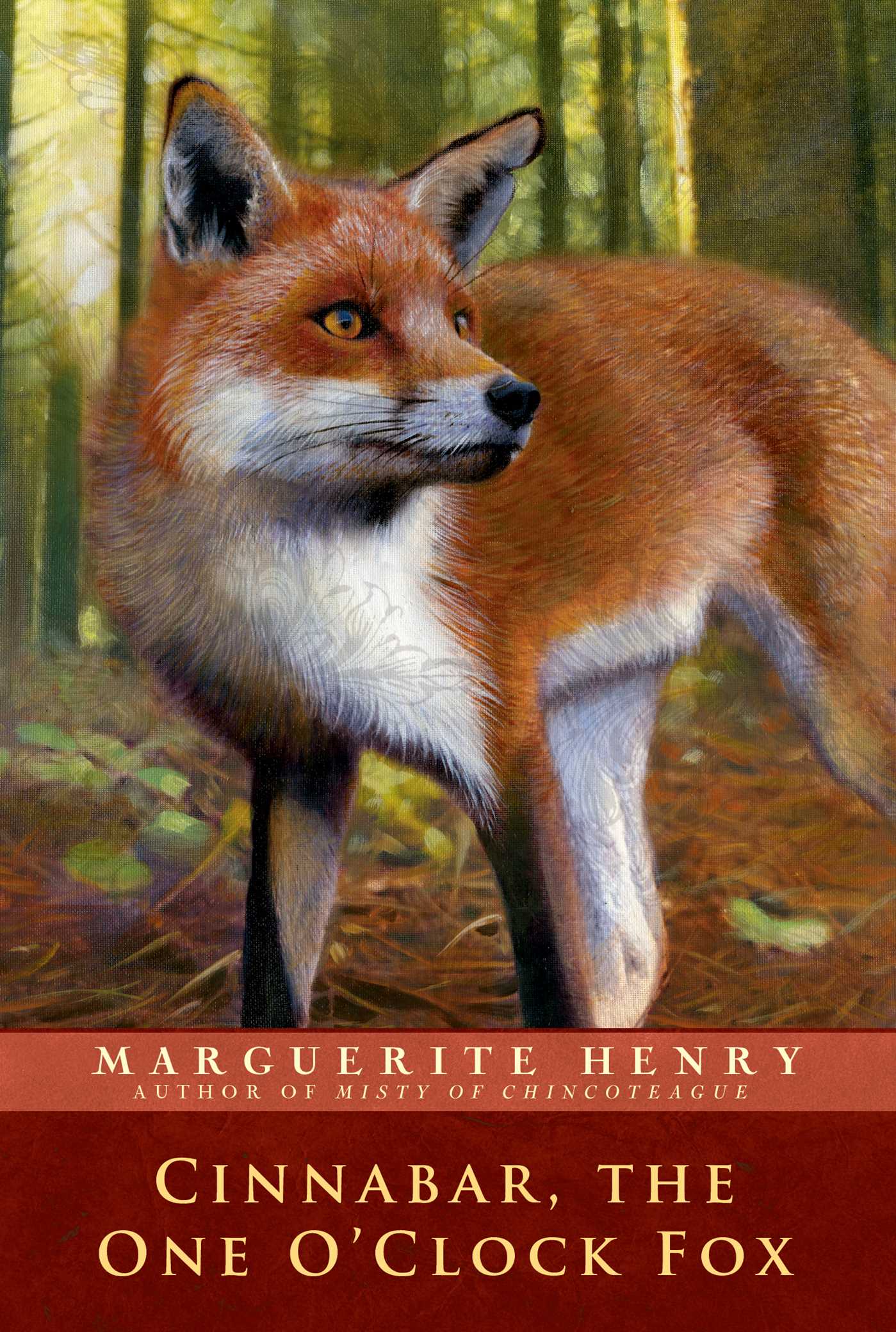 Cinnabar, the One O'Clock Fox

George Washington meets his match in a wily fox in this legendary hunting tale from Newbery Award–winning author Marguerite Henry, back in print by popular demand.

Cinnabar is a fox. He lives in a den with his family, Vicky and four little cubs. He’s a hardworking fox who does everything he can to ensure that his family has what they need. But during fox hunting season, he likes to have a little fun: Every hunt day, promptly at one o’clock, Cinnabar shows up and runs until nightfall. Can the huntsmen ever catch this clever fox?

Based on an old legend about fox hunting in the area around Mount Vernon, Cinnabar pits one very wily fox against George Washington himself—and the result is a wild chase for all! This beloved story from Newbery Award–winning author Marguerite Henry features the original text and illustrations with gorgeous new cover art.

Cinnabar, the One O’Clock Fox

Chapter 1 FOUR IS A JOLLY NICE NUMBER
It was April in Virginia. The brooks and runs on George Washington’s estate were overflowing in their hurry to join the big Potomac. Pussy willows along the banks were swollen to plumpness. And everywhere, the woods and meadows were alive with cheeps and chirrings and little feet scampering.

One morning just before the break of dawn, when the moon was still shining brightly, four little fox cubs were born in a den tucked away in a sassafras thicket.

Cinnabar, their father, had been out all night, hunting. He wanted to bring a nice plump hen to his wife, because she liked nice plump hens. And if ever there was a time to please Vicky, as he called her, it was now. This very night.

Cinnabar’s masklike face, with its slanted amber eyes, looked up at the great white face of the moon. But that is not what he saw. He saw instead the warm coziness of his own den. And there was Vicky, still busy at the nestbox weaving a mattress of grasses and reeds. He knew what that meant. It meant furry little foxes—any moment now.

He bayed his happiness to the moon: “Yapp yurr. Yapp yur-rrr.” He disappeared into a tangle of honeysuckle and hauled out the fat hen that he had cached away an hour before. Then he pawed deeper into the tanglewood and gathered up four good-sized barn mice. He took them one at a time and placed them side by side neatly and securely underneath the hen’s wings.

“My stars and garters!” he barked to himself. “It’s been a capital night for hunting!” Grabbing the hen’s neck in his mouth, he flung her over his shoulder and trotted off toward home.

Cinnabar was a big, red, magnificent fellow. Courage and heart showed in the very look of him. A rough scar across his nose and a nick on one ear in no way marred his handsomeness. On the contrary, they gave him a gay and gallant air. They spoke of battles won—over eagles and buzzards and hawks and weasels.

Cinnabar was, in truth, afraid of nothing. Neither of dark nor of storm; nor of hunters nor hounds. He was free and unfearing, the very spirit of the wilds.

With a windblown movement he went gliding along, his brush of a tail stretched out full. His lively ears pricked to and fro, catching every sound of the night. Pine needles singing. Frogs playing their bassoons. Birds beginning to stir and twitter. It seemed to him that the morning was coming in with a peculiar gladness.

Silently he left the big trees behind and trotted down a little avenue of hemlocks. Fast as he traveled, his imagination went faster still. He could almost hear Vicky’s cry of delight when she spied not only the plump hen, but the four good mice as well. “How she likes hens and mice!” he mused. “Better than grouse and grasshoppers. Better than anything . . . except me!” he chuckled, as he shifted his burden to the other shoulder.

Chatting and laughing and happy in himself, he threaded his way through the sassafras thicket that hid his den. But as he approached the opening, he stopped dead. What were those strange sounds? He thought he heard small trills and whimperings.

“Criminy, criminy, and by Jimminy!” he exploded. “I must be a father. I hear puppy voices. Unmistakably, I do.”

Parting the ferns that screened the doorway, he pattered softly through them. Then wriggling forward on his belly, he bunted the hen down the dark entry and finally emerged into the warm comfort of his own den. He blinked his eyes at the brightness. A wick burning in an oyster shell gave off a yellow light, and the fire in the grate was a red glow.

“That you, Cinny?” a voice came muffled.

In reply, Cinnabar barked two short barks and one long. It was the family signal, and it meant “Good hunting tonight.” He saw Vicky now—up on one elbow, half sitting, half reclining in the nestbox—and he could hear her tongue strokes, licking, licking, licking.

Little shivers of excitement raced up and down his spine. How many pups would there be this time? Two? Four? Nine? Twelve?

“I shall be quite content with three,” he told himself as he took a step closer, “and I hope they all have blue eyes. Blue eyes bewitch me.”

Vicky was eager to tell about her babies. She gave four quick, happy barks.

“Oh! Four is a jolly nice number,” Cinnabar assured her. “ ’Twill be easy to provide for them.” He laid the big white hen in a splash of firelight, hoping Vicky would notice. But she was concerned only with her young ones.

“My dear,” said Cinnabar with a proud grin, “have you thought of names for the funny snub-nosed things?”

“Cinnabar! They are not funny snub-nosed things. Oh, yes, they are,” she laughed, contradicting herself all in the same breath. “Well, anyway, I’ve named the two little boys.”

“Yes. And I do hope you like family names.”

“I like them indeed!” Cinnabar nodded in approval as he plucked at his whiskers thoughtfully. Then reaching into the nestbox he fondled the fuzzy little creatures. “Hmmm—how about Merry and Mischief for the vixens?” he asked, looking all merry and mischievous himself.
Marguerite Henry

Cinnabar, the One O'Clock Fox