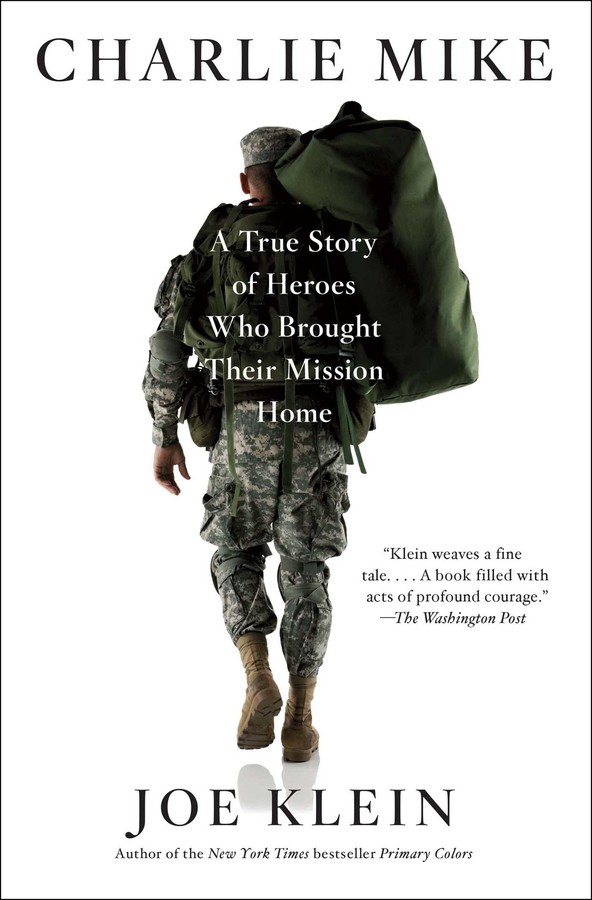 By Joe Klein
LIST PRICE $13.99
PRICE MAY VARY BY RETAILER

This true story of two decorated combat veterans who find a new way to save their comrades and heal their country is “a great look at two of the best veteran organizations going and the incredible humans who make the effort work” (Jon Stewart).

In Charlie Mike, a true account that “reads like a novel” (Publishers Weekly) and “explodes like a thriller” (The Huffington Post), Klein tells the dramatic story of Eric Greitens and Jake Wood, larger-than-life war heroes who come home and use their military values to help others.

Wounded in Iraq, Navy SEAL Eric Greitens returns home to find that his fellow veterans all want the same thing: to continue to serve their country. He founds The Mission Continues to provide paid public service fellowships for wounded veterans. One of the first fellows is former Marine sergeant Jake Wood, a natural leader who begins Team Rubicon, organizing 9/11 veterans for dangerous disaster relief projects around the world. “We do chaos,” he says.

“A deep and compelling exploration of a group of young veterans determined to continue serving after leaving the military” (The Washington Post), this is a story that hasn’t been told before—a saga of lives saved, not wasted. The chaos these soldiers face isn’t only in the streets of Haiti after the 2010 earthquake or in New York City after Hurricane Sandy—it’s also in the lives of their fellow veterans. Charlie Mike shows how Greitens and Wood draw on the military virtues of discipline and selflessness to guide others towards inner peace and, ultimately, to help build a more vigorous nation. 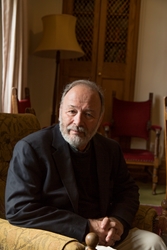 Joe Klein is an award-winning journalist and the author of seven books, including the #1 bestseller Primary Colors. His weekly Time column, “In the Arena,” covers US politics, elections, and foreign policy and has won two National Headliner Awards for best magazine column.

"An inspiring story of life--and death--after returning from the wars in Iraq and Afghanistan. Joe Klein movingly describes how the struggle of veterans to rejoin a civilian world detached from their military experience and its life-changing impact often requires as much, if not more, courage and heroism as the battlefield. I could not put down this book which is, in the end, not just about finding new purpose but about brotherhood and love."

"Charlie Mike is an extraordinary book about extraordinary individuals—young Americans who fought in Iraq and Afghanistan and returned home, only to discover a powerful need to 'Charlie Mike'—to continue the mission by performing tasks larger than themselves with fellow veterans who sought to do the same. Joe Klein captures the experiences of these individuals clearly, vividly, and eloquently, and gives us an exceedingly moving and truly inspiring tribute to the members of what deserves to be recognized as America’s New Greatest Generation."

"Joe Klein has done us a national service, telling the inspirational stories of vets from the Iraq and Afghanistan wars who returned home and as civilians continued their dedication to country and people in need. This is the can-do generation and this book honors their non-stop citizenship."

"A master storyteller, Joe Klein brings the reader into the lives of a captivating group of soldiers who found ways, after they returned home, to sustain the camaraderie and sense of mission their military service provided. What a powerful, uplifting and important tale this is!"

– Doris Kearns Goodwin, author of The Bully Pulpit and the Pulitzer Prize-winning No Ordinary Time

“Game-changing. . . . The book explodes like a thriller. . . . The brilliance of this book is that it entertains and engages as it brings about a sea change in our views of vets and the military.”

“Klein's young men and women were heroes in Afghanistan and Iraq, but in a way they're even more heroic back home on their interior battlefields and in their deep commitments of friendship. Charlie Mike is beautifully written, compellingly vivid, rich with humanity and soul.”

“A great look at two of the best veteran organizations going and the incredible humans who make the effort work.”

“Few writers have captured the grief and suffering of combat veterans making the transition from war to home better than journalist Joe Klein. . . . In Charlie Mike, a term that means "continue the mission," Klein's main focus is two veterans who seem to represent the best America has to offer. . . . Klein shows how their service changed them but also propelled them to serve others once their military service ended.”

“Klein’s brief personal stories of these extraordinary men and women whose lives were marked by war are enlightening and powerful. . . . Ever the insightful reporter, he captures the conversational rhythm and vernacular of these remarkable warriors who have refitted their service to civilian life. . . . The compelling story of a continuing mission, rendered with sympathy and verisimilitude.”

"Vivid. . . . Klein offers a compelling portrait of Greitens and other vets who used their military discipline, determination, and sense of mission to continue in service to the nation."

"At times the book reads like a novel. . . . Klein presents a clear picture of the costs of modern war and the heroic actions of former warriors who wanted to make life better for their fellow service members."

“Joe Klein relates a series of vignettes about warriors full of vigor, returning home and willing to lead new efforts to clean up messes here and abroad. This is welcome material.”

“The telling of [Clay] Hunt’s story showcases Klein’s skills; because of his sensitive but honest portrayal, the loss of Hunt is not limited to those who loved him. It becomes our loss, too, and the implications of that loss are not hard to ascertain. We must do better by our veterans. More than ever, when the war is over, we still need them.”

“A deep and compelling exploration of a group of young veterans determined to continue serving after leaving the military. . . . Absorbing. . . . Klein weaves a fine tale . . . told with care and skill.”

By Joe Klein
LIST PRICE $13.99
PRICE MAY VARY BY RETAILER