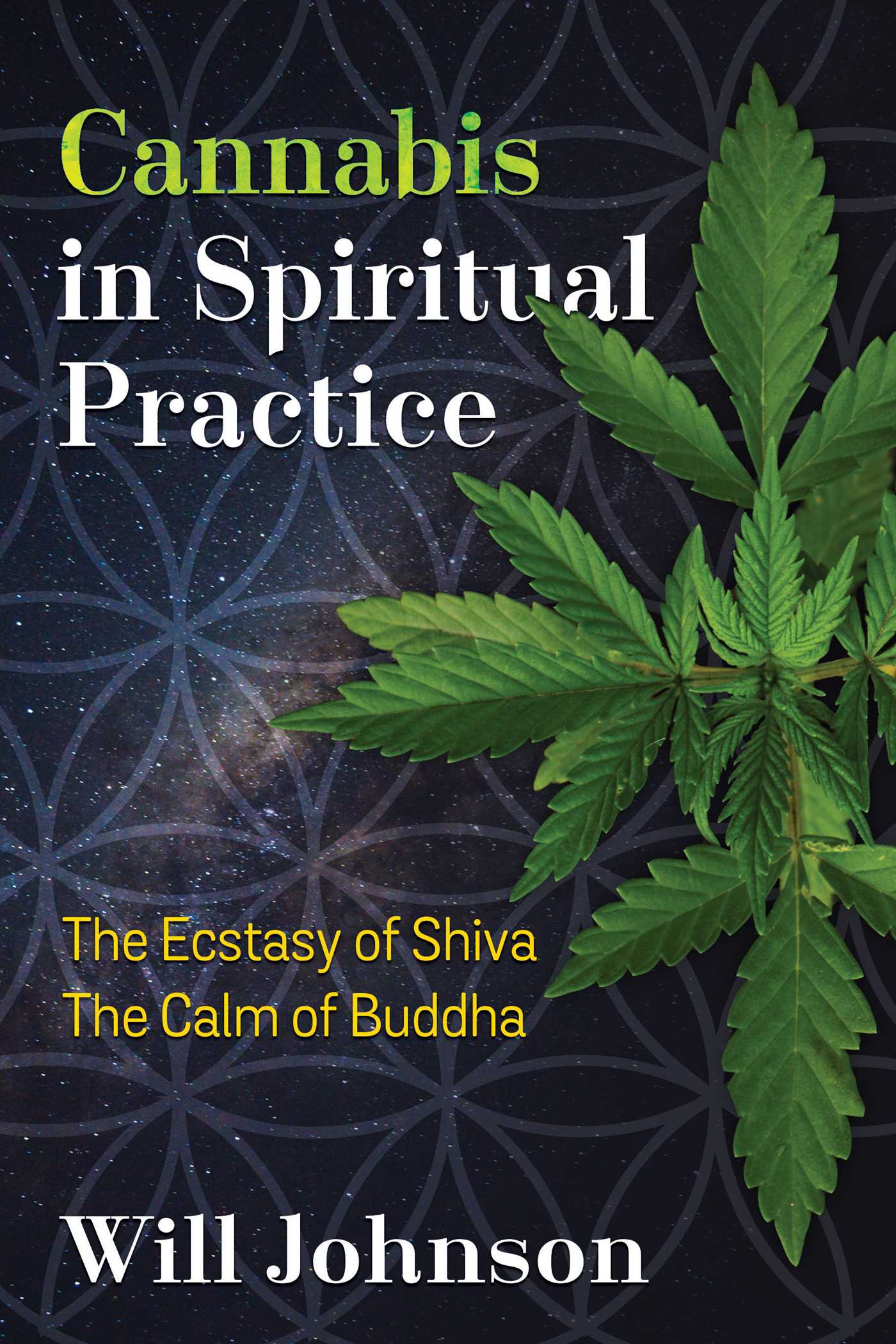 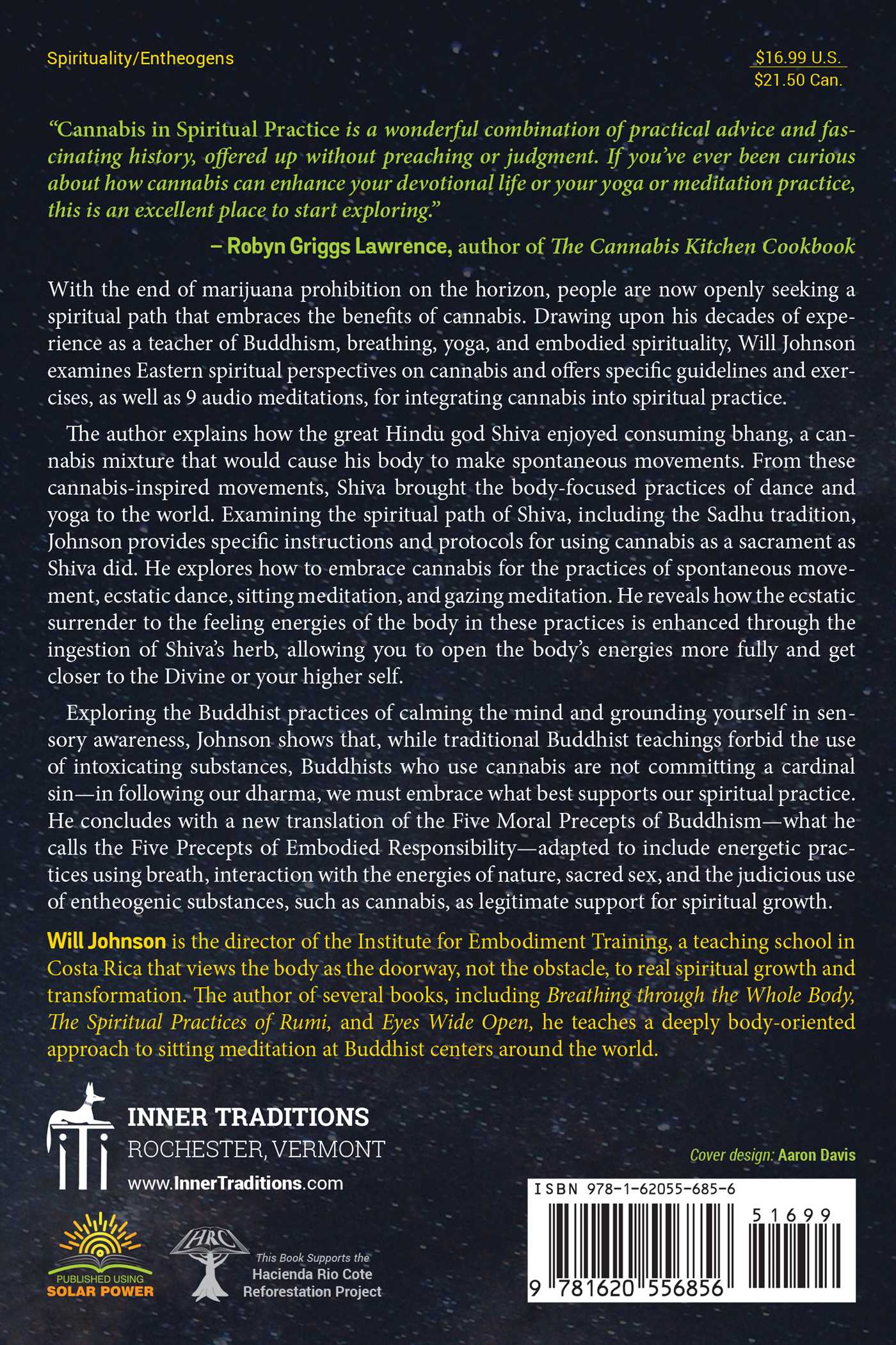 The Ecstasy of Shiva, the Calm of Buddha

By Will Johnson
LIST PRICE $16.99
PRICE MAY VARY BY RETAILER

• Provides instructions for using marijuana for the spiritual practices of spontaneous movement, ecstatic dance, sitting meditation, and gazing meditation, allowing you to open the body’s energies more fully and get closer to the Divine or your higher self

• Includes a new translation of the Five Moral Precepts of Buddhism, adapted to include energetic practices and the judicious use of entheogenic substances as a legitimate support for spiritual growth

With the end of marijuana prohibition on the horizon, people are now openly seeking a spiritual path that embraces the benefits of cannabis. Drawing upon his decades of experience as a teacher of Buddhism, breathing, yoga, and embodied spirituality, Will Johnson examines Eastern spiritual perspectives on marijuana and offers specific guidelines and exercises for integrating cannabis into spiritual practice.

The author explains how the great Hindu god Shiva enjoyed consuming bhang, a marijuana mixture that would cause his body to make spontaneous movements. From these cannabis-inspired movements, Shiva brought the body-focused practices of dance and yoga to the world. Examining the spiritual path of Shiva, including the Sadhu tradition, Johnson provides specific instructions and protocols for using marijuana as a sacrament as Shiva did. He explores how to embrace cannabis for the practices of spontaneous movement, ecstatic dance, sitting meditation, and gazing meditation. He reveals how the ecstatic surrender to the feeling energies of the body in these practices is enhanced through the ingestion of Shiva’s herb, allowing you to open the body’s energies more fully and get closer to the Divine or your higher self.

Exploring the Buddhist practices of calming the mind and grounding yourself in sensory awareness, Johnson shows that, while traditional Buddhist teachings forbid the use of intoxicating substances, Buddhists who use cannabis are not committing a cardinal sin--in following our dharma, we must embrace what best supports our spiritual practice. He concludes with a new translation of the Five Moral Precepts of Buddhism--what he calls the Five Precepts of Embodied Responsibility--adapted to include energetic practices using breath, interaction with the energies of nature, sacred sex, and the judicious use of entheogenic substances, such as cannabis, as legitimate support for spiritual growth.

Embracing Nature: Gazing and the Dance of Touch

The practices of Shiva reconnect you with the felt pulse of the world of nature--the rhythmic flow and throb you feel coursing through the veins, tissues, and energetic pathways of your body. The awakened feeling presence of the body is the conduit through which you can access and enter into the vortex, the deep and all-pervasive ground dimension of life and consciousness that underlies the world of appearances but is invisible to the eye. It’s always there, always present, but is out of reach, out of sight, and literally out of touch, to the somatophobic dimension of consciousness (a consciousness based on linear thought, which is uncomfortable with, even fearful of, the soma, or feeling presence of the body, and the quality of consciousness it supports).

The primary reason you’re unable to see and feel into this deeper dimension is the culturally appropriated embodiment of somatophobia: tensions in the body, restrictions to the breath, the blanketing over of sensations. Release the tensions and restrictions, welcome back the felt presence of sensations, and you can begin to kinesthetically see the ground dimension of consciousness, this alternative place in which everything feels and looks to be more of a single piece.

It’s one thing to open to the awareness of the higher embodied consciousness that Shiva’s practices so potently promote. It’s another then to share the awakening of that awareness with another--a friend or lover. Through that sharing the awakened state of Shiva can be directly communicated and deepened.

Cannabis as a spiritual sacrament works extremely well for practices and meditations that have a deeply body-oriented focus, and the practice of looking into someone’s eyes and holding his or her gaze stimulates the sensations and presence of the body so strongly that it can almost be thought of as touch at a distance. The primary reason that many people find gazing into another’s eyes so challenging and daunting an act is that it rapidly activates and accentuates feeling presence, and such a rapid activation will be experienced as unwelcome and uncomfortable for anyone under the complete spell of somatophobia.

But for those of us who have had the good fortune of starting to come out from under the spell and who have begun to witness and have glimpses of the extraordinary alternate universe and the quality of consciousness that it supports will find the practice of gazing into a friend’s eyes, while she or he is gazing back at yours, almost magical, a healing balm for the soul. As

in the valley of your friend’s face

there is a well.

Go to that valley

and fall into that well.

if you want to know God,

then turn your face to the friend you love

and don’t look away.

The practice couldn’t be simpler:

Merging Back into the One through Gazing at Your Great Friend

Sit down across from your dear friend

and begin to look

into each other’s eyes.

to the journey of sensation and sight

that starts to unfold.

Let them be exactly as they are

until they start naturally changing

which they almost immediately will.

Surrender to the current

of the changing flow of sensations.

Layer by layer different aspects of your being

may emerge and pass away.

Let them all come,

you’ve been holding these parts of yourself

so no one can see.

Just let whatever wants to happen

you may become ecstatic,

you may not be able to breathe.

The visual field may become hallucinatory.

You may see lights or colors

The outlines of his or her face

may start to soften and melt.

Suddenly the face in front of you

may morph into a totally different face,

someone you may know,

someone you may have never seen before.

Your friend’s face may even momentarily disappear.

Let the parade of visual appearances

not resisting any appearance

nor holding onto any vision,

just as you allow the current of the life force,

without any resistance or clinging,

to keep building and subsiding,

passing through the conduit of your body,

a stream of sensations.

The longer you gaze,

the deeper you go.

The more you relax and let go,

the more the barriers between you and your friend

Peel away the layers

until there’s nothing left

will usher you both

into an inner sanctum of union.

No longer you and your friend,

of the great common ground of consciousness

that binds us together as one.

Exploring this practice exposes you to a whole new level of the meaning of friendship. Together, eye in eye, you go on a journey of revelation and unfolding in which layer upon layer of holding and tension—and the aspects of your personality dependent on them for their expression—come to the surface and then evaporate, revealing whatever’s been kept hidden underneath. Some of the emergences may thrill you. Others may frighten you. What transpires doesn’t matter. What does matter is that you be with whatever it is that comes to the surface and surrender to the current that causes it to morph and change into something else.

You do not need to inhale Shiva’s sacrament to explore this practice, but for those of you for whom cannabis has become a part of your life, this practice will take you into birthright depths of consciousness that you may not even know exist. All you need to do is welcome the feeling presence that the practice so strongly stimulates, let go, and trust in the wisdom of the current.
Will Johnson

“Cannabis in Spiritual Practice is a wonderful combination of practical advice and fascinating history, offered up without preaching or judgment. If you’ve ever been curious about how cannabis can enhance your devotional life or your yoga or meditation practice, this is an excellent place to start exploring.”

“Will Johnson has a clear understanding of the human ‘mindbody,’ how we limit ourselves, how we can free ourselves from those limitations to awaken to unconditioned reality, and how cannabis can play a valuable role in that awakening journey when used skillfully. His articulation of these central human concerns is as clear as his understanding. Cannabis in Spiritual Practice seamlessly blends principle and practice into accessible, applicable guidance.”

“For those who value the herb for her limitless potential, Cannabis in Spiritual Practice is the next level. Highly recommend.”

– Graham Hancock, author of Fingerprints of the Gods and Supernatural

The Ecstasy of Shiva, the Calm of Buddha

By Will Johnson
LIST PRICE $16.99
PRICE MAY VARY BY RETAILER