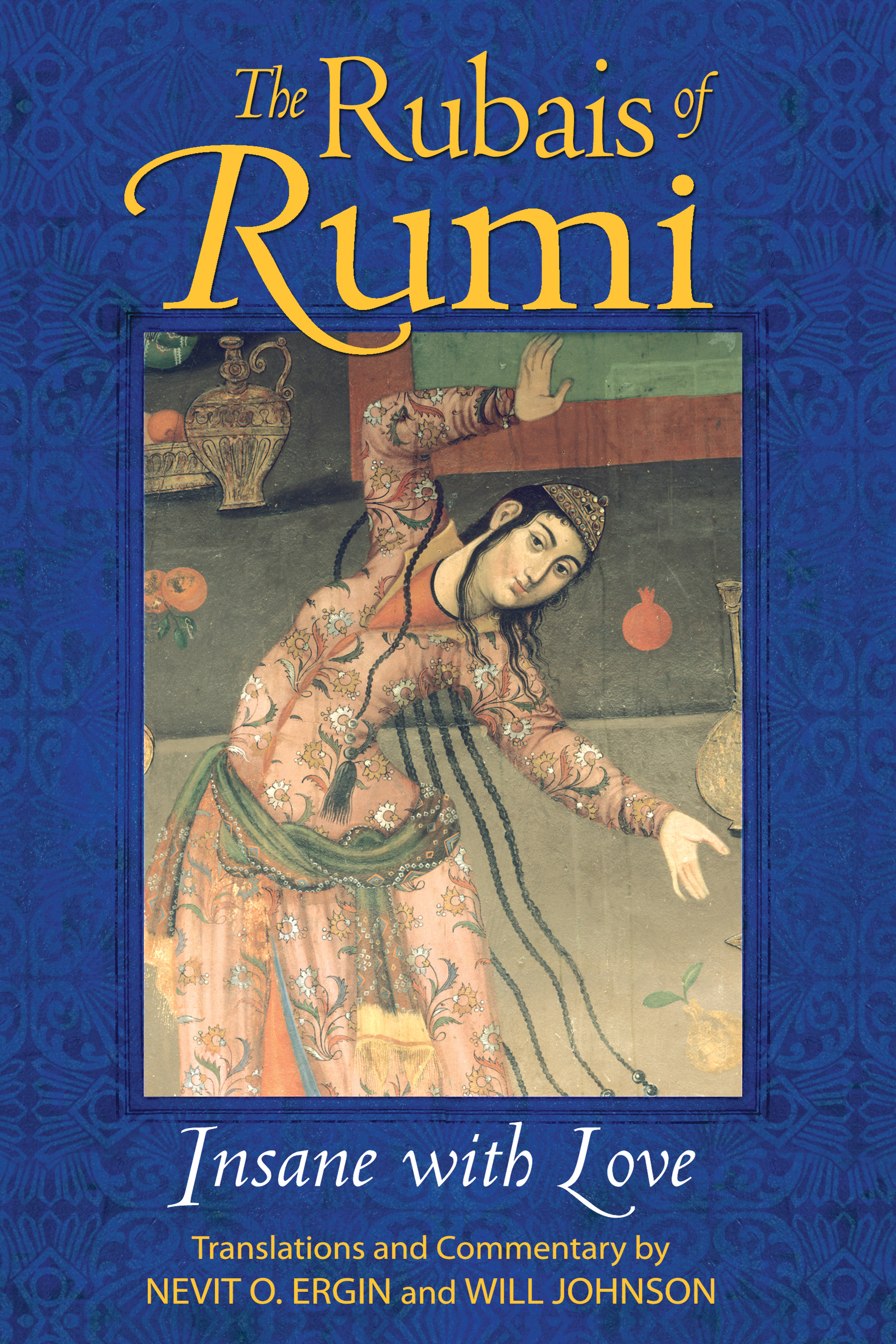 Translated with commentary by Nevit O. Ergin and Will Johnson
LIST PRICE $14.95
PRICE MAY VARY BY RETAILER

The first English translation of the rubais of Rumi

Rumi is well known for the over 44,000 verses that appear in a 23-volume collection called the Divan-i Kebir. Yet Rumi also composed 1,700 rubais, short aphorisms and observations, whose depth and message belie their brevity.

The form of rubais first became well known through the 11th-century collection The Rubaiyat of Omar Khayyam. But unlike Khayyam, who like most poets would sit and carefully craft each word, Rumi would compose and speak his poems through the spontaneous “language of poetry” that poured from his lips as he traveled the streets of Konya, Anatolia (present-day Turkey). Very few of Rumi’s rubais have been translated into any of the languages of the contemporary Western world. Now, Nevit O. Ergin, the translator of the complete Divan-i Kebir, and Will Johnson present here 233 of the most evocative of Rumi’s 1,700 rubais.

Rumi’s poetry expresses profound and complex truths in beautiful yet simple language. He reveals that by going deep into the interior of our heart and soul, we can arrive at a place in which we once again merge and connect with the divine. This mystical quest, Rumi contends, is the birthright of us all. Anything less than a complete dissolving into the world of divine union will not provide the satisfaction and peace that we all seek. The simple, yet profound spiritual truths and visions contained in The Rubais of Rumi lead the way to the path of reconnection to the direct energies of God.

from The Themes of Rumi's World

Ordinarily we think of spiritual practice, with its images of monks and nuns praying in cells or meditating silently in zendos for long hours, days, and weeks at a time, as sober and serious undertakings. Rumi’s spirituality, however, is anything but a sober affair. Rumi loves the ecstatic dancer (and became one himself), who loses herself in surrendering to the movements of her body, and avoids the sober theologian who tries to convince us with his arguments (that come across as a touch sterile). For Rumi, reason when applied to religion is an impediment to God; the real action of religion is an ecstatic explosion of energies through the body and mind that may leave us looking like a happy drunk on a bender.

There is some controversy as to exactly what kind of wine Rumi keeps urging us to get drunk on. Certainly he is referring to the divine wine of bodily sensation itself that, once kindled and activated, releases forth powerful and profound energies that we have no choice but to surrender to and become totally intoxicated by. Once these bodily energies awaken and start moving in and through us, we may look very drunk indeed.

However, most of us most of the time have little awareness of the divine wine that is bottled up in our body. Research studies suggest that we are using only 5 to 15 percent of the capability and capacity of our brains, but what is also true is that we probably only feel, at any given moment, between 5 and 15 percent of the full range of tactile sensations that fill our body from head to foot. Sensation (wild, alive, vibrant, ecstatic) can be felt to exist on every part of the body down to the smallest cell, but many (more reasonable) people never take advantage of the invitation to drink from this divine open bar. Rumi exhorts us to rekindle an awareness of body as a field of ecstatic, vibratory sensation. As a young man he was taught by his father, who himself was an accomplished mystic, the doctrine of ma’iyya, which tells us that God cannot be found in the mind alone, and not even in the heart, but needs to be felt as a physical sensation in each and every part of the body.

Islam strictly forbids the consumption of alcohol. Even so, Rumi’s shattering revelation during his retreats with his great friend Shams showed him a path beyond the rules and regulations of organized religion. It is known, for example, that Shams would tell Rumi to purchase and consume wine as a way to push his friend beyond his attachment to the orthodox ways. Music and dance are also prohibited in the strictest vision of Islam, and we know that Rumi went far beyond that prohibition. He would keep urging the musicians to keep playing longer so he could keep moving his body in response to the impulses he felt deep within. The word ecstasy can be thought of as ex-stasis, or the coming out of a condition of stillness, and who is less still than the wild dancer surrendering to whatever movements want to erupt through his body?

In any case, Rumi tells us that the cautious and sober-minded person is never going to fall into God’s embrace. Become drunk on the divine, and then drink some more. Rumi wants us to turn ourselves into raging, divine alcoholics, wildly drunk on the energies of God, and certainly this vision is a breath of fresh air for all of us who have felt the longing in our hearts to reunite with the energies of the divine, but who never have been able to satisfy that longing through the sober rituals and ceremonies that take place in the more orthodox churches, mosques, temples, meditation halls, and ashrams of this world.

my beauty had his feelings hurt
by my constantly reciting verses
he told me:
“are you measuring me with the meters of the poem?”
I said:
“tell me what verse you’d like me to recite”
he answered: “how could I fit into any one verse?”
I exist
but this glass of morning wine also exists
I think
I get up
I walk around
I get drunk in front of the tall cypress
then melt completely away
so that nothing remains but him

“Nevit Ergin’s lifelong work on the poetry of Rumi is beautiful and heroic and, for the English reader, indispensable. Will Johnson’s insightful commentary is also much appreciated.”

– Coleman Barks, author of Rumi: We Are Three and Rumi: Bridge to the Soul

"Nevit Ergin is translator of Rumi's 44-volume set and he and Will Johnson together present over two hundred of Rumi's best rubais, making this a recommended pick for any collection strong in Rumi wisdom."

"Thanks to these translations and commentary, this work of such beauty and depth, has become accessible and understandable to the modern world. . . . These rubais, perused even at random, evoke deep emotions and contemplation, arousing awareness of pre-existing, simple truths of life, leading to unification with the Divine."

Translated with commentary by Nevit O. Ergin and Will Johnson
LIST PRICE $14.95
PRICE MAY VARY BY RETAILER