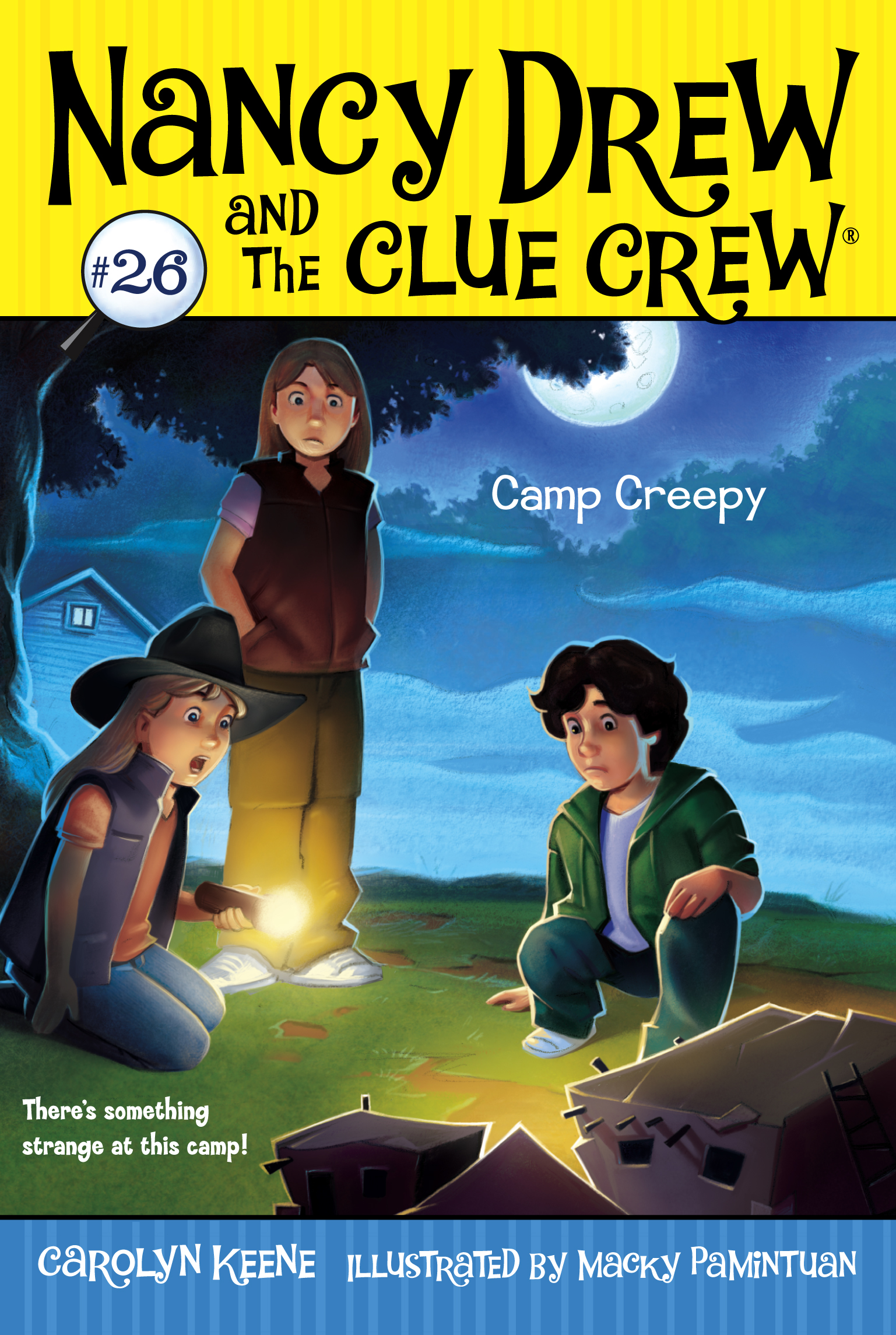 Book #26 of Nancy Drew and the Clue Crew
By Carolyn Keene
Illustrated by Macky Pamintuan
LIST PRICE $5.99
PRICE MAY VARY BY RETAILER

In Camp Creepy, the girls take a school trip to Taos, New Mexico! A classmate’s uncle has opened a new camp and the kids of River Heights Elementary are invited to come test it out. But when a series of mysterious incidents ruin Nancy’s art project, Nancy thinks something eerie is at work. Could she have upset the Taos Indian spirits?

Project Pueblo
“And the team with the winning Native American model gets to spend the weeklong break at a camp in northern New Mexico!” Mrs. Ramirez announced. “In keeping with the spirit of the Native Americans, whatever you use must come from items around your house. This is a green competition.”

“Wow!” Eight-year-old Nancy Drew whispered excitedly to Bess Marvin, who was sitting behind her. “That is so cool!”

“We have to build it first,” Bess whispered back.

George Fayne leaned over from her desk across the aisle from Nancy. “It’s in the bag,” she said. “I know exactly what we’re going to do.”

Their third-grade teacher, Mrs. Ramirez, had just told them that the uncle of their classmate Katherine Madison had bought a large summer camp near Taos, New Mexico. He had offered to let the winning team spend a week there over break—free of charge.

After the announcement Mrs. Ramirez called for quiet study time, but Nancy found it impossible to concentrate. She wanted to know what George and Bess thought.

George and Bess were cousins, though they didn’t look or act anything alike. They were Nancy’s best friends, and the three of them made up the Clue Crew. The Clue Crew was well-known at River Heights Elementary for solving mysteries.

Finally, the recess bell rang. With Nancy in the lead, the girls ran to a far corner of the playground.

“Now nobody can hear us,” Nancy said. “What’s your plan, George?”

“If we want to win this competition, we’ll obviously have to focus on just one group of Native Americans,” George said with a grin. “The Taos Indians. I saw a documentary about them last night on TV. I know all about their culture!”

“Taos!” Nancy exclaimed. “That’s where the summer camp is.”

“What if someone else chooses them?” Bess asked.

“We’ll tell Mrs. Ramirez before anyone else does,” Nancy said.

When the bell rang to end recess, Nancy and her friends raced back to their classroom.

“Excellent choice, girls!” Mrs. Ramirez said when they told her. “I’ll put that down for you.”

After school, as they headed back to Nancy’s house, George said, “I printed a picture of the Taos pueblo from the Internet. I think it’ll be easy to make.” George was a whiz with computers.

Up in Nancy’s room, George pulled out the picture. The building was three stories high and looked like wooden blocks stacked on top of each other. Each block was smaller than the one below it. “What’s it made of?” she asked.

“I see wood sticking out at the top,” Bess pointed out.

“Those are called cross-timbers,” George said. “They help support the roof.”

Just as Bess opened her mouth to ask what, they heard barking in Nancy’s backyard. Nancy walked over to the window. “Chocolate Chip has company,” she said. “That’s strange.”

“I’ve never seen that other dog around before,” Nancy said. “Hmmm. I wonder how it got in.” She turned away from the window. “Oh, well, they seem okay. Let them play together. We have work to do. We can see if the dog is still there later.”

As they headed downstairs, Nancy said, “We have boxes and boxes of old wheat flakes cereal. If we mix that with milk, we’ll have the adobe, and we can cut some dead twigs off one of the trees in the backyard for the cross-timbers.”

Right before they got to the kitchen, Nancy said, “I’ll just tell Hannah we need the cereal for a school project, but I don’t want to tell her exactly what it is.”

“Of course, I do,” Nancy said. “It’s just that I don’t want her to spill the beans! This is a competition.”

Hannah Gruen was the Drews’ housekeeper and had been with the family ever since Mrs. Drew died when Nancy was young. As a busy attorney, Nancy’s father, Carson Drew, spent long hours both in his office and at the courthouse, which meant that Hannah’s role in their family was more than just that of a housekeeper.

When the girls got to the kitchen, Hannah was looking out the window. “Where’d that dog come from?” Nancy asked.

Hannah wheeled around, startled. “What dog?” she said quickly.

“That cute little dog Chocolate Chip was playing with a few minutes ago,” Bess said.

“I don’t know what you’re talking about,” Hannah said. “Anyway, I can’t talk now. I need to prepare dinner.”

Nancy looked at Bess and George and raised an eyebrow. Why was Hannah acting so strangely? “Hannah, may I have some of those boxes of cereal that nobody eats?” she asked. “They’re for a school project.”

“Sure, sure, take whatever you want,” Hannah said. “I never like to throw it away. I sometimes use it in meatloaf.”

Nancy took three boxes of cereal from the back of the pantry. Then she opened the refrigerator and removed a carton of milk. “Take these to that little storeroom at the back of the garage,” she whispered to George and Bess. “I’m going outside to get some twigs.”

As Bess and George headed to the storeroom, Nancy started for the kitchen door that led to the backyard.

“Where are you going?” Hannah suddenly demanded.

“The backyard,” Nancy said. “I also need some twigs for the project.”

“Well, I can get them for you,” Hannah said.

“We have to do everything ourselves, Hannah, or it won’t be our project,” Nancy replied. Some-thing was definitely up.

Hannah relented with a sigh.

Outside Nancy looked around, trying to decide where to get the cross-timbers. Suddenly, she knew. One of the shrubs by the back fence had some dead branches. They’d be perfect. She hurried over to it. As she leaned down to break off the twigs, she noticed a hole under the back fence. It was too small for Chip to wiggle under and out of the yard, but it was large enough for the other dog to get in. She’d have to tell Hannah about it. But after she collected the twigs and went back into the house, Hannah was no longer in the kitchen. So Nancy forgot all about it and turned her mind to the project.

By the time Nancy got to the storeroom, Bess and George had already found a plastic bowl and had poured the wheat flakes into it.

“I think we should do this someplace else, Nancy,” Bess said. “This place smells like an animal has been living in it.”

Nancy poured some milk on the cereal in the bowl. “Now we get to squish it together,” she said.

Once the mixture was the right consistency, the girls cut out the side of a cereal box to use as a base. They built the pueblo following directions George had found online.

George looked at the picture of the Taos pueblo, then at their model. “Perfect!” she said.

“Oh wait,” Nancy said. “We need to use some of the twigs to build a couple of ladders. That’s how they reached the upper stories.”

They found some cotton string and tied different size twigs together to make the ladders.

“We’ll leave it in here to let it dry overnight,” Nancy said. She admired the model. “There’s no way we’re going to lose this competition.”

George pulled a camera out of her backpack and took a few pictures before she and Bess left. At dinner that night Hannah seemed more relaxed, and Nancy was so busy listening to Mr. Drew talk about his newest case, she forgot all about everything else.

It was only as she was about to get into bed that she looked out the window and saw Hannah running around the backyard in her robe that Nancy remembered the little dog. Is this a home-grown mystery? she wondered.
Carolyn Keene

Macky Pamintuan was born and raised in the Philippines. He moved to San Francisco at age twenty-one and received his fine arts degree from the Academy of Art College.

Book #26 of Nancy Drew and the Clue Crew
By Carolyn Keene
Illustrated by Macky Pamintuan
LIST PRICE $5.99
PRICE MAY VARY BY RETAILER

More books in this series: Nancy Drew and the Clue Crew