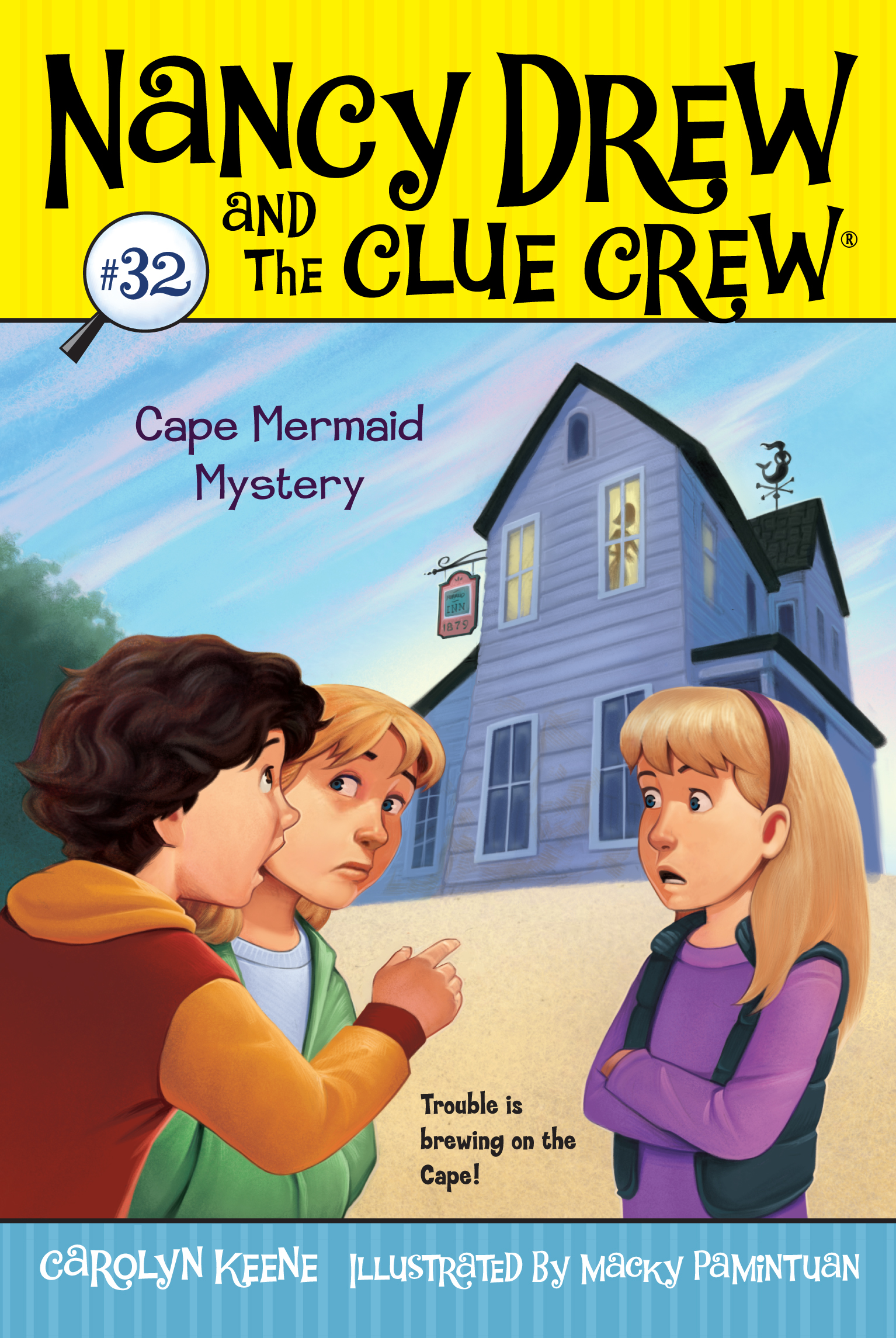 Book #32 of Nancy Drew and the Clue Crew
By Carolyn Keene
Illustrated by Macky Pamintuan
LIST PRICE $5.99
PRICE MAY VARY BY RETAILER

Nancy Drew and the Clue Crew are off to the beach—and sleuthing for ghosts!

Nancy and her friends are headed for the shores of Cape Mermaid, New Jersey, where they are hoping to spend a fun-filled week. But as soon as they arrive at an old inn on the beach, strange things start to happen—spooky noises, a message for help, and a possible ghost sighting. Could the rumored ghost of Cape Mermaid actually exist? Or is there more to the story than meets the eye? It’s up to the Clue Crew to solve the mystery!

“I can smell the ocean!” eight-year-old Nancy Drew exclaimed as she rolled down the car window.

“I can see the ice-cream stand!” George’s cousin Bess Marvin piped up. “Can we stop, Mr. Drew? Pleeeeeease?”

“Pleeeeeease?” Nancy and George chimed in.

Laughing, Carson Drew made a right turn onto Neptune Street. “I promise we can go later. I don’t want to spoil your appetites for dinner.”

“Okay, Daddy,” Nancy said. “Are we eating at their house? Or at a restaurant?”

“Their house is a hotel, so I’m not sure,” the Drews’ housekeeper, Hannah Gruen, said. She was in the passenger seat next to Carson, with a road map spread out across her lap. “There it is, on the right,” she added, pointing. “Oh my gosh, it’s beautiful!”

Nancy craned her neck for a better look. Ahead of them was a big Victorian mansion. It was pale blue with purple shutters, and it had a gold weather vane on top in the shape of a mermaid. The sign in front read: MERMAID INN, 1879.

Nancy, Carson, Hannah, and Nancy’s best friends, George and Bess, were visiting Carson’s cousin Claire Katz. Claire and her husband, Leo, owned the inn, which was in the seaside town of Cape Mermaid, New Jersey. The Katzes had two daughters: Tessie, who was ten, and Amanda, who was six. Carson, a lawyer, was going to do some legal work for Leo and Claire. While he was busy, Nancy, George, and Bess were going to explore Cape Mermaid with Hannah. Nancy couldn’t wait!

Carson pulled into the driveway and parked the car. Nancy and her friends grabbed their rolling suitcases from the back and half-ran, half-walked through the front yard. Seashells crunched under their feet on the path, which wound through a garden full of fragrant roses, honeysuckle, and lavender. Nancy could make out a pale stretch of sandy beach just beyond the backyard.

The front door burst open just before they reached it. “Yay, you’re here!” a little girl said, jumping up and down. She had short, wavy brown hair, and she was wearing a polka-dot bathing suit, a pink ballet tutu, and one orange flip-flop.

“You must be Amanda,” Carson said as he and Hannah caught up to everyone.

A second girl joined Amanda, dressed in a white beach cover-up. She was taller, with shoulder-length, dark blond hair. It was hard to see her face, though, because she was holding a small purple video camera in front of it. A little red light was flashing, which meant that it was in record mode.

Carson bent down and waved awkwardly at the camera. “Uh, hi. You must be Tessie.”

“Hi, Carson! Hi, Carson’s friends and family!” Tessie slowly panned her camera from left to right. “This is Tessie Katz, reporting from Cape Mermaid,” she said in a serious-sounding voice. “These people have just arrived at the Mermaid Inn after a long drive from River Heights, Illinois. What will they find here in Cape Mermaid? A relaxing summer vacation? An exciting adventure? Or something else? Stay tuned!”

George pointed to the camera. “Is that the brand-new KidCam? I’ve been saving up my allowance to buy one!”

Tessie lowered the camera from her face. “It’s supercool! It records video digitally onto a memory card.”

“I would have no idea how to work one of those,” Hannah joked to Carson.

“Me neither. Kids these days are way smarter about technology than we are,” Carson agreed. He turned to Tessie and Amanda. “Are your parents here? They’re expecting us.”

Nancy and the others followed the two sisters inside and down a long hallway. The inside of the inn was as beautiful as the outside, with pale blue walls, white wicker furniture, and vases of fresh flowers. A couple of cats were sitting on a windowsill, grooming themselves.

In the kitchen at the end of the hall, Claire was standing at the stove, stirring sauce in a large pot. Leo was at the sink, chopping vegetables. Nancy didn’t remember them except from photos. Nancy’s parents had brought her to Cape Mermaid when she was just a baby. Her mom had died when she was three years old, and Hannah had helped take care of her ever since.

“You’re here! Hello!” Claire turned off the burner and rushed over to give Carson a hug. She turned to Nancy and gave her a hug too. “Wow, you’ve gotten so big since the last time I saw you!”

Carson introduced everyone. “George and Bess are cousins. They’re in the same class as Nancy,” he finished.

“Carson, didn’t you mention in an e-mail once that these girls are detectives?” Leo asked with a wink.

“We have a club called the Clue Crew, and we solve mysteries,” Bess replied.

“Really?” Tessie’s blue eyes lit up. “What kind of mysteries?”

“All kinds of mysteries. Once, we figured out who took a bunch of newborn chicks from our classroom. And another time we found a supervaluable pet bug that was missing,” Nancy explained.

Claire went back to the stove. “I’m sure you’re all hungry after your long trip. Tessie, are Michaela and Emma joining us for dinner? If so, tell them to be over in ten minutes. Leo, can you show our guests up to their rooms? I can finish up the salads.” She added, “We’ll be eating in our family dining room across the hall. We don’t have a restaurant here.”

“What can we do to help?” Carson asked.

“Nothing at all. Let me show you your rooms, then we can come back down for Claire’s famous spaghetti and meatballs,” Leo said cheerfully.

“You guys are going to love Cape Mermaid. There’s so much to do here!” Michaela said.

“Yeah, like whale-watching. And shopping. And eating tons and tons of candy at the Candygram Shoppe,” Emma added.

Michaela and Emma were Tessie’s two best friends from school. Michaela had a habit of twirling her long, pale blond hair. Emma wore a red baseball cap over her curly brown hair.

Dinner was over. Michaela, Emma, and Tessie were hanging out with Nancy, George, and Bess in their room while they unpacked. Nancy loved the room, which had rose-print wallpaper and big windows that overlooked the ocean. There was an antique bookshelf with a bunch of kids’ books, seashells, and a small marble mermaid statuette.

Tessie was sitting cross-legged on the floor and peering through the viewfinder of her video camera. “I got lots of cool footage today,” she remarked. “Hey, Clue Crew! Maybe I could interview you guys sometime about all the mysteries you’ve solved?”

“Sure. Are you making a movie or something?” Nancy asked.

“I just like to shoot a bunch of random stuff,” Tessie cut in. She stared pointedly at Michaela and Emma. “Don’t you guys have to be home by now? It’s eight.” She tapped on her watch.

“Maybe we can all do something tomorrow,” Michaela suggested, grabbing her ballet bag.

The two girls took off. As Nancy, Bess, and George finished putting their clothes away, Tessie told them about more fun things to do in town.

“There’s the boardwalk, the ice-cream stand, and, oh yeah, the beach!” Tessie went on. “There’s the history museum too. The lady who runs it, Mrs. Bishop, is kind of cranky, though.”

Nancy was about to reply when she heard weird noises upstairs. It sounded like a soft crash, then footsteps, then something being dragged across the floor.

The other girls heard it too. “What is that?” George whispered to Tessie.

Tessie frowned. “I’m not sure. Maybe one of the cats is stuck in the attic. We’d better go check it out!”

Nancy and her friends followed Tessie out of the room. At the end of the hallway, she opened a door that led to a set of narrow, carpeted stairs. She switched on a light and also grabbed a flashlight that was hanging on the wall.

The girls soon reached the top of the stairs. Nancy glanced around the attic, which was jam-packed with dusty furniture, old toys, and cardboard boxes. Even though the space was hot and stuffy, she couldn’t help but shiver a little.

Tessie arced her flashlight this way and that. “Marshmallow Fluff? Vanilla Cream? Are you up here?” she called out.

The beam of her flashlight lit up something on the wall.

Someone—or something—had scrawled the words HELP ME in a layer of dust.
Carolyn Keene

Macky Pamintuan was born and raised in the Philippines. He moved to San Francisco at age twenty-one and received his fine arts degree from the Academy of Art College.

Book #32 of Nancy Drew and the Clue Crew
By Carolyn Keene
Illustrated by Macky Pamintuan
LIST PRICE $5.99
PRICE MAY VARY BY RETAILER

More books in this series: Nancy Drew and the Clue Crew