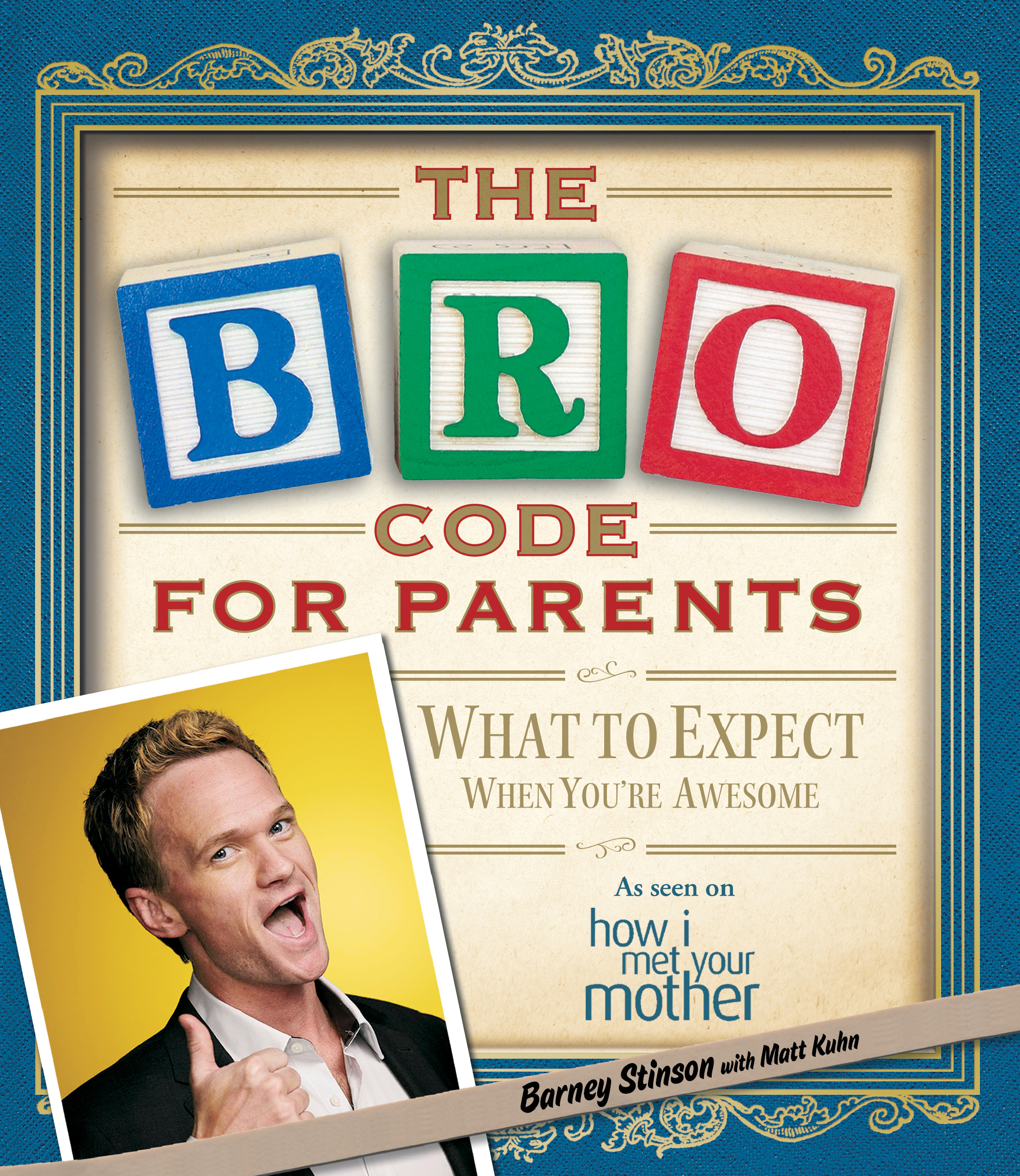 What to Expect When You're Awesome

The newest book in the New York Times bestselling “Barney Stinson” canon teaches prospective parents everything they need to know to have a legendary kid.

So you’re going to be a parent.

You might be asking yourself a series of important questions:

Will I be a good parent? • Will I be able to afford this? • Can I ever have sex again?

Well, the answer to all these questions is a rock-solid no. But just because your existence is now a petrifying turd on the canvas of life doesn’t mean your kid has to be as lame as you’re about to become. That’s why I’ve written this book—to teach you how to be an awesomommy or legendaddy.

The Bro Code for Parents will help you:

Interview and hire a smokin’ hot nanny • Teach your child instant classics like “The Boobs on the Bus” and “Bro, Bro, Bro Your Boat”

With full-color illustrations, interactive work sheets, and even suggestions for how to turn a stroller into a broller, The Bro Code for Parents gives you all the tools you’ll need to raise your child to be almost as awesome as I am. Almost.

WHY I WROTE THIS AWESOME BOOK

You might be wondering why I, Barney “the Cooter King” Stinson, have written a book about pregnancy and parenthood when I’m not a father and have, in fact, spent the lion’s share of my adult life cunningly avoiding exactly this type of life-destroying affliction. The answer is simple: money, bitches! Just kidding. I also wrote it because when my good friends Marshall and Lily gave birth to their first child, I realized that without me he’d never learn important lifelong skills like “setting insects on fire” or “learning to go upskirt” or “strategic boner concealment.”

And why do I want to help others? Because I care.

I care about the countless young parents who senselessly sacrifice their lives only to raise kids who believe soccer is a legitimate sport.

I care about the millions of children who are taught “sharing” and “listening” instead of real-world skills like “lying” and “using people to get what you want.”

And most important, I care about America.

That’s right, when people think of Barney Stinson, they immediately think of one thing: “giant multiorgasmic penis.” The next thing they think is “God-fearing patriot . . . who happens to have a giant multiorgasmic penis.” You see, I believe that the next generation of Americans can overcome the many shortcomings of their lame parents and one day be as awesome as I am. Then we will be not only the greatest nation on the planet, but also the best dressed.1

In short, I’m writing this book because the so-called parenting experts have been leading our children down the wrong path. And I’m not at all writing this book because my friends Marshall and Lily just had a baby and I’m terrified that I won’t be important to them anymore unless it seems like I know lots of cool stuff about babies . . . so I don’t see why you’re even suggesting that.

1 Note to foreign readers: Please don’t be offended by my patriotism. If there’s one thing we’ve all learned over the last decade it’s that everyone the world over loves America . . . and whether you like it or not, that includes you.
INTRODUCTION

Congratulations! If you’re reading this very important book, then you’ve made the momentous decision to cannonball headfirst into the waterless pool of parenthood. Your world is about to fundamentally and permanently change in ways you could never have anticipated. You’re excited, overwhelmed, and probably a little scared at the prospect of raising a child and no doubt riddled with serious concerns about your future:

Will I be a good parent?

Can I afford to give my child the life she deserves?

Will I ever have pleasurable sex again?

After I squeeze this kid out of my uterus, will I ever regain my slamming hot bod?

Can I really ever love this child as much as I love my own life?

Rest at ease because the answer to all of these questions is a rock-solid no. Your life is over, Bro. Done. Curtains. Guess what? We all took a vote and you’re the new mayor of Loserville. I mean . . . obviously I didn’t vote, because I’m not a loser. But you know who is? You. A big, fat, dumb one.

But there is hope. Just because your existence is suddenly a petrifying turd on the canvas of life doesn’t mean your kid has to be the insecure, socially inept, unhygienic basket case you’re about to become. And that’s why I’ve written this book—to help you raise an awesome, kickass kid who will live the legendary life you no longer can because of the emotionally and financially crippling decision you just made. But seriously, thanks for buying the book.

GOLDISLUT AND THE THREE BROS

nce upon a time there were three Bros: Barney Bro, Marshall Bro, and Ted Bro. They were going out later for what would no doubt be another legendary night and decided to go pound some shots at the bar to get properly psyched.

Just then Goldislut, a blond hottie who lived upstairs, wandered into their pad, looking to borrow some sugar, if you know what I mean. She decided to sit down and wait for the Bros to get back. Barney’s chair was too hard (what up!), Ted’s chair was too soft, and Marshall’s chair was okay I guess, though it leans awkwardly to the left and he should really get that checked out.

Soon Goldislut grew tired of waiting and went into the bedroom to lie down. Marshall’s bed was too dirty, Ted’s bed was too rigid from inactivity, but Barney’s bed was just right, despite being so big—Goldislut liked it that way.

They went into the bedroom and saw Goldislut asleep in Barney’s bed. When she awoke, she winked sexily at Barney Bro but was understandably frightened by Ted Bro and Marshall Bro. Barney Bro kicked them out and gave Goldislut some sugar. Then he had sex with her.

Until your child can walk on his own, you’ll be forced to carry him around in your arms since many cultures frown upon dragging a baby behind you on a tow rope. It can be quite the workout since it’s just like carrying a 25 pound dumbbell everywhere you go . . . if the dumbbell squirmed, drooled, and frequently crapped all over itself. The good news is you’ll quickly start to notice some dramatic muscle growth: your biceps will bulge out faster than when Popeye chugs a can of spinach, your triceps will harden faster than when Bruce Banner gets angry and hulks out, and your forearms will tone faster than when a fourteen-year-old hits puberty and starts cranking his deal like it’s a stubborn can of spray paint.

ARE YOU READY TO BE
A PARENT?

s you consider having a child, one of the first questions you should ask yourself is, “Am I sober right now?” We’ve all made a poor decision while drunk, be it reenacting the van surfing scene from Teen Wolf or sleeping with a balding chick or commandeering a police horse to escape the balding chick . . . but this is too important a decision to make while under the influence of alcohol.

The question you really need to ask yourself is, “Am I ready to be a parent?” Becoming a mother or a father requires a whole new set of responsibilities, such as

Getting home every single night before 3 AM

Trading in your wardrobe for ugly sweaters and high-riding “slacks”

Watching and having an informed opinion on each week’s Extreme Makeover: Home Edition

Having sex almost exclusively with just one other person

Many people are understandably nervous about these types of lifestyle changes and aren’t ready to trade in an invigorating social life, geographic mobility, disposable income, a rewarding sense of self, relative quiet, exercise, a flexible calendar, and regular sleep patterns for the joy of wiping diarrhea off a baby’s legs, hands, and face.
Barney Stinson

What to Expect When You're Awesome