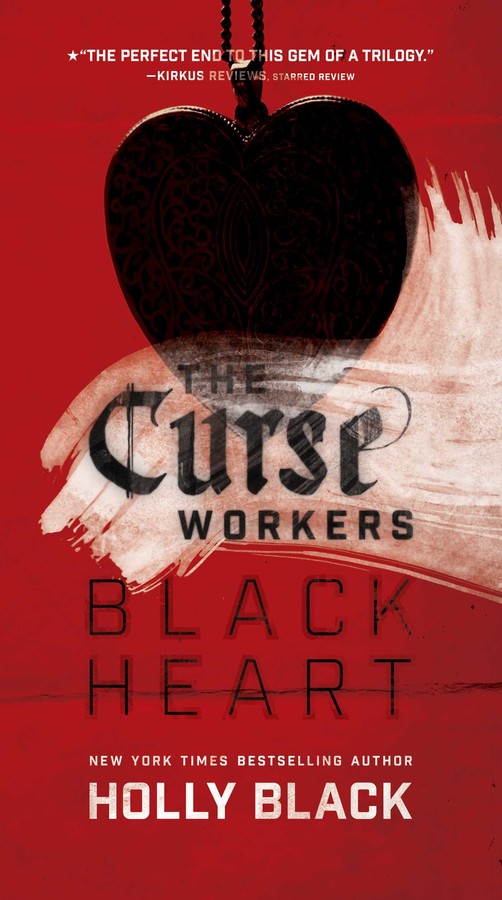 Book #3 of The Curse Workers
By Holly Black
LIST PRICE $9.99
PRICE MAY VARY BY RETAILER

In book three of the Curse Workers series, “the perfect end to this gem of a trilogy” (Kirkus Reviews, starred review), trust is a priceless commodity and the lines between right and wrong become dangerously blurred.

But with a mother on the lam, the girl he loves about to take her place in the Mob, and all new secrets coming to light, what’s right and what’s wrong become increasingly hard to tell apart. When the Feds ask him to do the one thing he said he would never do again, he starts to wonder if they really are the good guys, or if it’s all a con. And if it is, Cassel may have to make his biggest gamble yet—on love.

Black Heart
of the Curse Workers series
By Holly Black

In a world where magic is illegal, Cassel Sharpe has the deadliest ability of all. With one touch, he can transform any object—including a person—into something else entirely. And that makes him a wanted man. The Feds are willing to forgive all his past crimes if he’ll only leave his con artist family behind and go straight. But why does going straight feel so crooked? For one thing, it means being on the opposite side of the law from Lila, the girl he loves. She’s the daughter of a mob boss and getting ready to join the family business herself. Though Cassel is pretty sure she can never love him back, he can’t stop obsessing over her. That would be bad enough, even if her father wasn’t keeping Cassel's mother prisoner in a posh apartment and threatening not to let her leave until she returns the priceless diamond she scammed off him years ago. Too bad she can’t remember where she put it. The Feds say they need Cassel to get rid of a powerful man who is spinning dangerously out of control. But if they want Cassel to use his unique talent to hurt people, what separates the good guys from the bad ones? Or is everyone just out to con him? Time is running out, and all Cassel’s magic and cleverness might not be enough to save him. With no easy answers and no one he can trust, love might be the most dangerous gamble of all.

Like White Cat and Red Glove, Black Heart is a "hardboiled" thriller, a literary genre to describe crime fiction. The cinematic equivalent is called a "noir thriller." Noir is primarily used as a cinematic term to describe stylized Hollywood crime dramas that were mostly produced in the 1940s and 1950s. Ask students to use electronic and print resources to research the characteristics of noir films. If possible, watch two or three films that are classics of the genre. Create a list of noir characteristics and identify instances of how these characteristics are used in the novel.

1. Why does Cassel consider his brother Barron to be a villain?

2. What is Cassel supposed to be learning from Barron?

3. What kind of relationship have Cassel and Barron had?

4. Why is Cassel worried about his mother?

5. What did Cassel’s grandfather mean when he said “all work works the worker”?

7. Why does seeing Lila make Cassel think of the “death instinct”?

8. What does Cassel’s mother tell him about the Resurrection Diamond?

9. What does Cassel see as the problem with telling the truth?

10. What gives Cassel a feeling of “perverse delight”?

11. What actions does Governor Patton want to take against curse workers?

12. What does Agent Yulikova want Cassel’s help with? What does she offer Cassel in exchange for his help?

13. How can Cassel tell that Mrs. Wasserman is an easy mark for his con?

14. What does Lila reveal to Cassel in her coded message?

15. What does Cassel mean when he says Lila “was the tragedy that made me look inside myself and see my corrupt heart”?

16. How is Cassel’s mom shot? Whom does he assume is responsible?

17. What is Cassel’s mom’s reaction to his working with federal agents?

18. Cassel wonders: “[W]hat if everyone is pretty much the same and it’s just a thousand small choices that add up to the person you are?” He’s horrified by the thought that there could be no good or evil, no black or white, and no right choice, just choice. What do you think?

19. What reasons does Cassel have to suspect that agents Yulikova and Jones might be planning to double-cross him?

20. How is killing someone a lot like conning someone?

21. What makes Cassel realize why people are so frightened of transformation workers?

22. Why does Agent Jones want to eliminate Cassel?

23. How does Lila know Cassel is Cassel?

24. Why does Zacharov tell Cassel that they are square? What does he tell Cassel about his mother that he would prefer not to know?

26. Is Cassel’s spontaneous decision to give up everything and go with Lila surprising? What do you think will become of Cassel and Lila?

1. Have readers exchange letters to one another in the code Cassel and Lila use.

3. Ask readers to work in pairs and use print and electronic resources to research a famous con man or woman and create a PowerPoint presentation on that person. One book readers may find helpful is Chris Barton’s Can I See Your I.D.? True Stories of False Identities (Dial, 2011).

4. In the acknowledgements, the author credits books and articles that were helpful to her in creating the Curse Workers trilogy. See “Something for Nothing” by Ian Crouch at http://www.theparisreview.org/blog/tag/david-maurer/.

5. Write an opening chapter for a novel that picks up where Black Heart leaves off.

Holly Black is the bestselling author of the Spiderwick series. Her Modern Faerie Tales series is comprised of Tithe, which was an ALA Top Ten Book for Teens and received starred reviews in Publishers Weekly and Kirkus Reviews; Valiant, which was an ALA Best Book for Young Adults, a Locus Magazine Recommended Read, and a recipient of the Andre Norton Award from the Science Fiction and Fantasy Writers of America; and Ironside, the sequel to Tithe, which was a New York Times bestseller. White Cat, the first book in the Curse Workers series, was a Kirkus Reviews Best Book, an ALA Best Fiction for Young Adults Selection, and received starred reviews from Publishers Weekly, Kirkus Reviews, and BCCB. Red Glove, the second book in the Curse Workers series, received a starred review from Publishers Weekly. Holly has also written a collection of short stories, The Poison Eaters and Other Stories. She lives in Amherst, Massachusetts. Visit Holly at blackholly.com.

Holly Black is the author of bestselling contemporary fantasy books for kids and teens. Some of her titles include The Spiderwick Chronicles (with Tony DiTerlizzi), the Modern Faerie Tales series, the Curse Workers series, Doll Bones, The Coldest Girl in Coldtown, The Darkest Part of the Forest, the Magisterium series (with Cassandra Clare), and the Folk of the Air series. She has been a finalist for the Mythopoeic Award, a finalist for an Eisner Award, and the recipient of both an Andre Norton Award and a Newbery Honor. She lives in New England with her husband and son in a house with a secret door. Visit her at BlackHolly.com.

Book #3 of The Curse Workers
By Holly Black
LIST PRICE $9.99
PRICE MAY VARY BY RETAILER