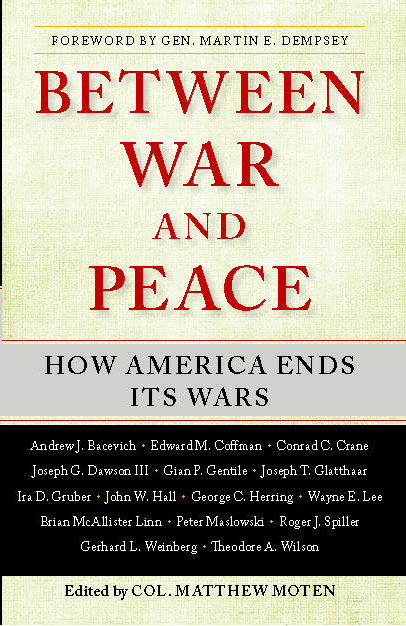 Between War and Peace

How America Ends Its Wars

An emperor bows abjectly before his conquerors on the deck of a battleship. As smoke yet rises from a bloody battlefield, a dejected general proffers his sword to his victorious opponent. Frock-coated ministers exchange red leather–bound treaty books in the Hall of Mirrors at Versailles. These are iconic images of war’s end, but even when they are historically accurate, they conceal more than they convey. Not all wars end decisively. Indeed, the endings of most wars are messy, complicated, inconclusive, and deeply intriguing. As the United States attempts to extricate itself from two long and costly wars in Iraq and Afghanistan, nothing could be more relevant than a look back at the ways America has ended its major conflicts in the past. It is a topic that has been curiously overlooked.

Edited and with an introduction by Col. Matthew Moten, a professor of history at West Point, Between War and Peace explores the endings of fourteen American wars, from the Revolution to the first Gulf War. Here, with incisive insight, narrative flourish, and strategic detail, some of America’s leading historians examine the progress of America’s wars: their initial aims—often quite different from their ends—their predominant strategies, their final campaigns, the painful journeys out of war, and the ramifications of the wars’ ends for the nation’s future.

This timely and important book confronts one of the most pressing issues of our time: how do we end conflict and how do we deal with the country we are leaving behind? As recent history has shown, an “exit strategy,” though it’s sometimes neglected, can be as important a piece of military strategy as any. Taken together, these essays break new historical and theoretical ground, building on our current understanding of America’s history in ways that few studies have done before.

A formidable enterprise of historical collaboration, Between War and Peace takes readers inside the climactic moments of America’s wars, offering a penetrating look at the past in hopes of illuminating future debates that will determine the nation’s course between war and peace.

“Making sense of the headlines…A set of essays devoted to the shadowy ground on which the guns have ceased their roar, but could resume it at any moment. . . . Of considerable interest to students of military history, strategy, tactics and geopolitics.”
—Kirkus Reviews

Between War and Peace

How America Ends Its Wars