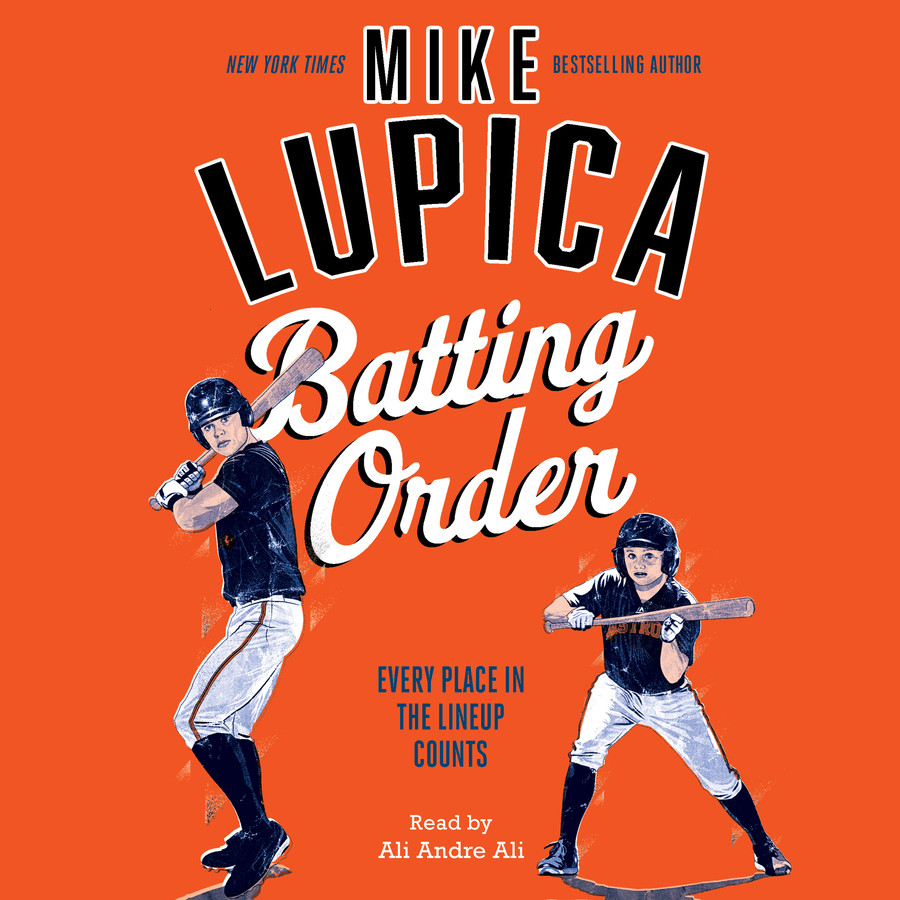 From acclaimed author of the Home Team series Mike Lupica comes an inspiring novel about the heart and soul of baseball.

On or off the field, Ben and Matt couldn’t be more different. Ben Roberson is an all-or-nothing player: he’s big, he’s bold, and he’s brash. Ben’s swing can hit a ball right out of the park—but that’s if he can get a hit at all.

Matt Baker is small, and shy, and his stutter has him avoiding the spotlight—even if he’s the best all-rounder on the team. But while Matt knows he’s got the chops, a part of him has always envied “Big Ben” and his attention-grabbing charm.

So it’s a total shock when Ben asks Matt to help him work on his swing. Because Ben can’t put the ball into play, and his showboating comes at the expense of the team. And even though Matt’s trying to help, Ben doesn’t seem to take him seriously, especially when it means toning things down.

The end of the season is fast approaching—is there enough time for Ben to realize bigger isn’t always better? For Matt to understand that sometimes, being the bigger person means standing up for yourself?

Or will they have to accept defeat?

By clicking 'Sign me up' I acknowledge that I have read and agree to the privacy policy and terms of use. Free audiobook offer available to NEW US subscribers only. Offer redeemable at Simon & Schuster's audiobook fulfillment partner. Must redeem within 90 days. See full terms and conditions and this month's choices.
Reading Group Guide for

You wouldn’t know it from Matt’s upbeat attitude and his enthusiasm for baseball, but the twelve-year-old has some serious challenges in his life. His father has moved to London and started a new family. Matt’s mother is terrific, but his father’s move still hurts. It’s also hard for Matt that he stutters, often when he has something important to say. And maybe this shouldn’t matter, but it does: Matt’s the shortest guy on his baseball team, and in his grade. When his baseball team starts winning but a key batter flounders, Matt learns that helping a friend can make him forget his own problems. Batting Order conveys a memorable summer of friendship and teamwork in the life of a boy for whom baseball is the best magic.

2. Being the shortest guy both in the sixth grade and on sports teams is one difficult element of Matt’s life. Why do kids like Joey tease him about it? How does that make Matt feel? How does thinking about José Altuve help Matt? Why do you think people are judged based on their height? How does this situation make you feel?

3. Matt is close to his mother, with whom he shares a love of baseball. What is she like? What does she do with her time, and what is she interested in? Find scenes where Matt and his mother have comfortable conversations with each other, and analyze how they interact and treat each other. How do you think their relationship impacts Matt?

4. Matt’s father has moved to London and started a new family there. Why did he leave? How much is he in touch with Matt? How does Matt feel about his father and the fact that he left? Explain your answers using examples from the text.

5. What kind of coach is Sarge? Find specific examples that reveal his character and his coaching style. Describe Matt’s relationship with Sarge. What useful advice does Sarge give to Matt or the entire team?

6. How do Sarge and Matt’s mother get along? Why do you think Sarge makes her first-base coach? What does she have to offer to the team? When and how is she helpful during practice and games?

7. In what ways is coaching like teaching? How does Matt try to help Ben with his swing? Why is Ben resistant to change? How does Matt’s mother help Matt and others with their baseball skills outside of games and team practices?

9. Why does Matt dislike people finishing his sentences when he’s stuttering? When does it come up with Ben? Why does Ben think he’s “just trying to help” the first time he fills in words for Matt?

10. What does the book’s last scene show about Ben and his understanding of Matt’s stuttering? Why do you think Joey is so cruel? How does Matt respond?

11. After Matt talks to Ms. Francis about an incident with Ben, she observes, “‘Baseball is supposed to be your safe place.’” Later, when Ben plans to come to Matt’s house, Matt worries that he’ll stutter and thinks that usually “being inside his house [is] as safe as being inside his own brain.” What does he mean by a place being safe? Why do you think encounters with Ben upset his feelings of safety?

13. How does Mr. Roberson behave during Ben’s baseball games? What kind of batting does he urge Ben to focus on? How do Sarge, Matt, and Matt’s mother think Ben should adjust his batting? Why does Ben listen to his father rather than his coaches? Why do you think it’s difficult for Ben to decide whose advice to follow?

14. Why is Mr. Roberson so hostile to the idea of Matt’s mother acting as a coach? What does he do to show his displeasure? Describe the scene where Matt’s mother takes Ben out of the game for not hustling to first base. Why does she make that decision? Why does Ben’s father object? Who do you think has a stronger case? Explain your answer.

15. Talk about Ben’s relationship with his father off the baseball field. Where is Ben’s mother? Why did she leave? Analyze why Mr. Roberson says Ben is “so soft sometimes,” adding that Ben’s mother calls him “sensitive.” Why does Mr. Roberson think boys shouldn’t be sensitive? How do you feel about that statement?

16. When Matt meets with Ms. Francis the day before the championship game, she says that he and Ben have “both found [their] voices.” What does she mean by that? What are the different ways in which speaking and voices are important in the novel? Explain your answers using examples from the text.

17. In the same meeting with Ms. Francis, Matt makes an observation about Ben: “‘At the start of the season I thought he had everything going for him.’” Why did Matt think that about Ben? What assumptions about Ben’s life turned out to be inaccurate? Relate Matt’s new insights about Ben to José’s earlier comment: “‘I think that maybe Ben is more complicated than he looks sometimes.’”

18. In the last scene, why does Sarge ask Matt to speak to the audience? How does Matt react? What is Ben’s role in this scene? Why do you think the book ends with Matt speaking rather than with a scene during a baseball game? Explain your answer.

19. Find a scene during one of the team’s games and analyze the writing. How does the author convey the game without recounting every detail? What does he include and what does he leave out? How does he build excitement? Consider word choices and varying sentence length in your analysis.

Where Are the Female Coaches?

Ask students to read this piece in the New York Times (https://www.nytimes.com/2019/12/31/opinion/Women-coaching-sports-title-ix.html) and watch the accompanying video about the decline in women’s coaches in college sports. Discuss the newspaper piece and video, and connect it to Mr. Roberson’s objection to Matt’s mother coaching. Then have each student research a different current or past female coach in college or professional sports, and report their findings to the class. Tell them to think about their coaching styles and experience and the roads that led them to their positions. Is it similar to or different from their male counterparts? How were they encouraged or discouraged?

The Little Engine That Could

Sarge calls Matt “The Little Engine That Could,” referring to a well-known children’s picture book by Watty Piper that has sold millions of copies. Read the book aloud to the class, and then lead a discussion about why Sarge compares Matt to events in the book. Ask students to discuss the overall message and why they think The Little Engine That Could has been popular for so many years. Have them consider if any aspects of the book feel dated and, if so, how.

Matt takes inspiration from knowing baseball player George Springer also deals with stuttering. Refer students to the Stuttering Foundation website (https://www.stutteringhelp.org/), which includes sections for kids and teens; have them learn more about these topics, including famous people past and present who have stuttered. Ask students to each find five interesting pieces of information on the website to share with the group and explain why they selected them.

Among the athletes that Matt admires are José Altuve and George Springer. Invite each student to identify a public figure in sports or another field whom they admire. They should learn more about the person so that they can describe their life and accomplishments and explain why they admire them. The final project can take different formats, depending on student preference: a speech about the public figure, a multimedia presentation, a poster, an essay, or another response that can be shared with the class.

Matt sometimes focuses on his breathing to relax, following Ms. Francis’s advice to “breathe through his nose” and “count to four as [he] take[s] the breath in, hold[s] it for four, let[s] it out the same way.” Have students research breathing exercises, including looking into the science behind them, and explore the related topic of mindfulness. Ask them to discuss their findings in small groups and then try some class breathing exercises.

Guide written by Kathleen Odean, a former school librarian and Chair of the 2002 Newbery Award committee. She gives professional development workshops on books for young people and is the author of Great Books for Girls and Great Books about Things Kids Love

"Narrator Ali Andre Ali captures the voice of Matt Baker, a young baseball player who aspires to improve his game and to inspire his teammates to do the same. In order to be successful, he must find the right words to help his teammate Ben rework his swing. Even when Matt finds the words, he has a difficult time saying them aloud since he stutters at times, especially when he's nervous. Ali provides individual voices for characters, including Matt's mom and his assistant coach, who encourages everyone to be their best. Listeners will cheer Matt on as he finds the confidence to support his teammates and ignore the opinions of those who doubt him."