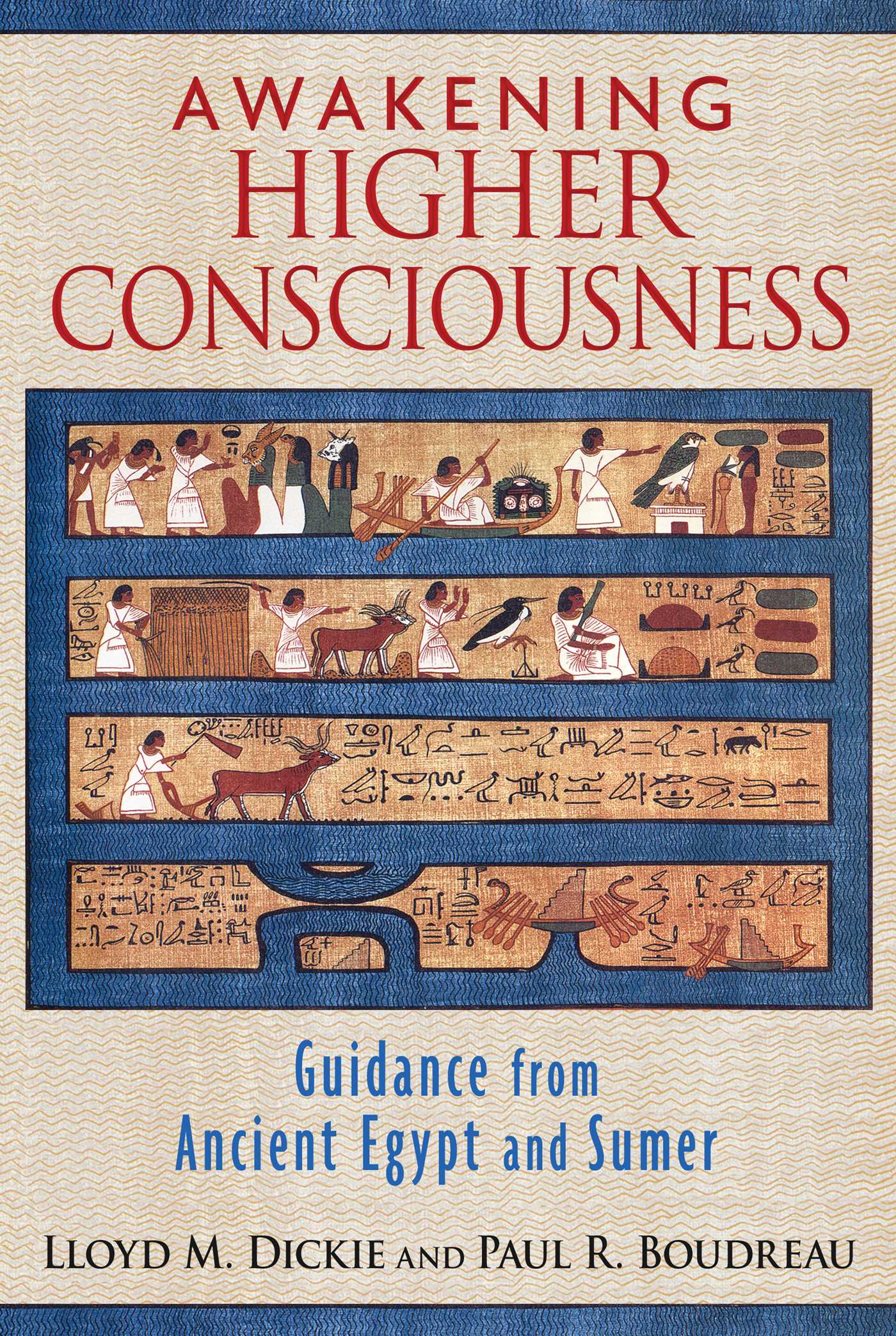 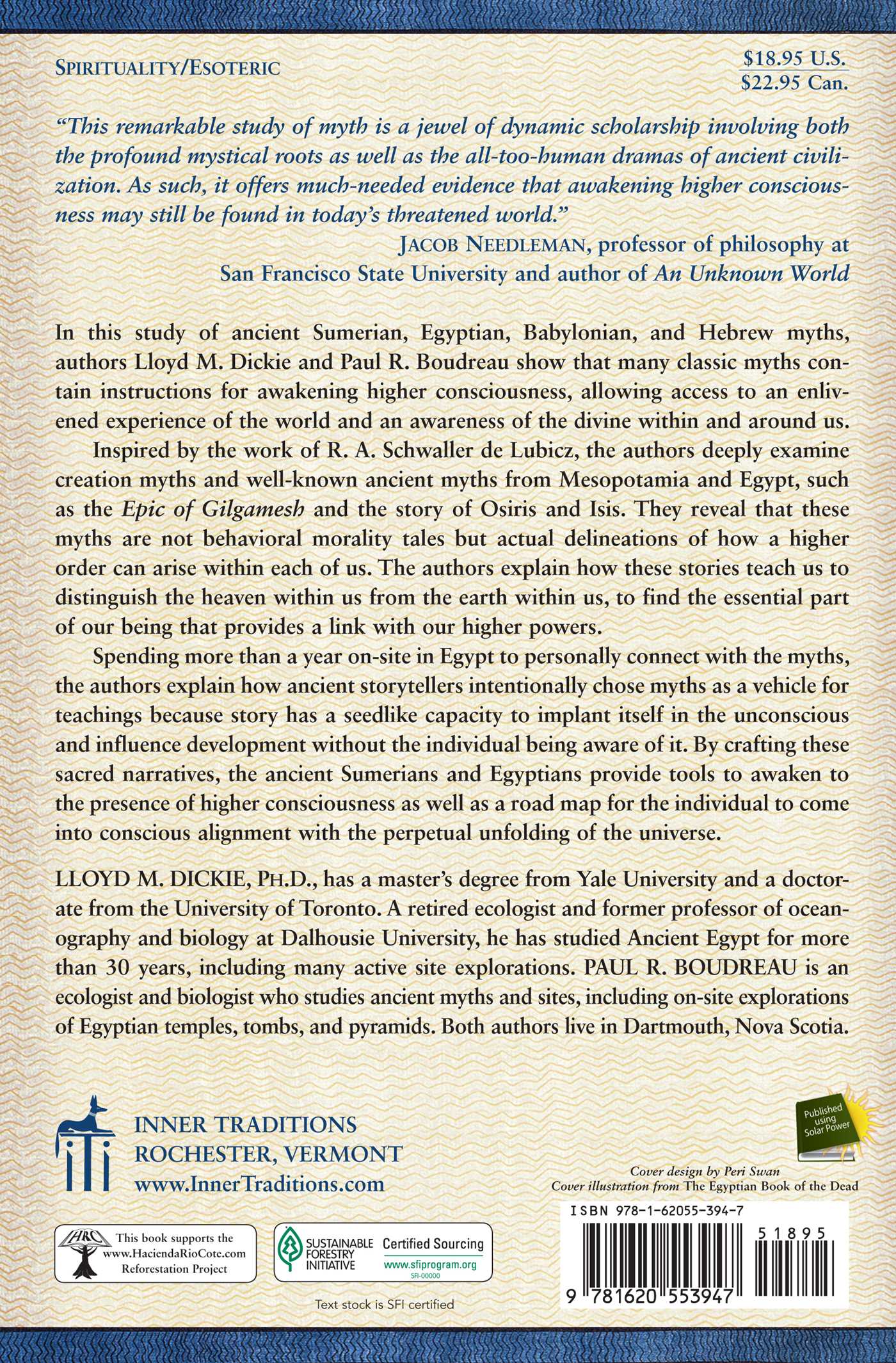 • Examines ancient Sumerian, Egyptian, Babylonian, and Hebrew myths, such as the Epic of Gilgamesh and the story of Osiris and Isis

In this study of ancient Sumerian, Egyptian, Babylonian, and Hebrew myths, authors Lloyd M. Dickie and Paul R. Boudreau show that many classic myths contain instructions for awakening higher consciousness, allowing access to enlivened experience of the world and awareness of the divine within and around us.

Inspired by the work of R. A. Schwaller de Lubicz, the authors deeply examine creation myths and well-known ancient myths from Mesopotamia and Egypt, such as the Epic of Gilgamesh and the story of Osiris and Isis. They reveal that these myths are not behavioral morality tales but actual delineations of how a higher order can arise within each of us. The authors explain how these stories teach us to distinguish the heaven within from the earth within us, to find the essential part of our being that provides a link with our higher powers.

Spending more than a year onsite in Egypt to personally connect with the myths, the authors explain how ancient storytellers intentionally chose myths as a vehicle for teachings because story has a seed-like capacity to implant itself in the unconscious and influence development without the individual being aware of it. By crafting these sacred narratives, the ancient Sumerians and Egyptians provide tools to awaken to the presence of higher consciousness as well as a road map for the individual to come into conscious alignment with the perpetual unfolding of the universe.

Three
A Dialogue of the Ages

The idea of an arising of Self within us is as old as the stories of the gods themselves. That the concept should appear new in our time is a sobering reminder of how limited our culture is to the difficult questions of reality. We seem confined to differentiating between “reality” and “illusion.” Behind our perceptions of that special part of our natures that might be considered “spiritual,” there is an unrecognized fear of the illusory. The solid ground of reality is clearly not easy to discover, and our desire for a better understanding of reality is one of the reasons for studying ancient myths.

One of the oldest of the Hebrew myths is the story of Adam and Eve, which relates the story of the creation of humankind. By paying special attention to some of alternative translations, we may be able to discern what constitutes illusion and what is true knowledge.

From the Upanishads of India to the dialogues of Plato, an important literary vehicle has been the presentation of ideas in the form of conversations between a pupil and teacher. We therefore propose to listen in on a conversation between two friends--Aquarius and Pisces.

A Conversation between Friends

Aquarius crossed the star garden and seated himself near his friend Pisces. A few moments passed before the younger man broke the silence.

“I have looked at the Hebrew stories of which you spoke, and I have many questions,” he said. “I understand that the God who created humankind must introduce his creation, Adam, to the idea of the Laws of the Universe. But what is this figure the story calls the snake? I don’t understand it or why it speaks to Eve rather than Adam. How in this incident is Adam related to her actions?”

“We could learn much about this from the ancient texts,” replied Pisces, “but problems may arise when we are unable to gain access to the original languages. Take, for example, the third book of Moses, with its story of ‘The Fall’ or what is sometimes called ‘The Temptation in the Garden.’ We must respect the understanding of the early translators, but important meanings may have been lost. To understand what has been said, we need to look at the original texts.

“You referred earlier to the three principles in the story: Adam, Eve, and the Snake. In this case we have access to the original three-glyph names used in the Hebrew text, which we can transliterate as Adam, Ashah, and Nahash. In Hebrew the names are spelled as:

Each of the individual glyphs stands for concepts or qualities. But even without knowing this we can see that Adam and Ashah share the ‘Aleph’ quality, and Ashah and Nahash share the ‘Shin’ quality. Each of these qualities is combined with other glyphs that help to give the words their whole meaning.

“Initially we can try to find a more comprehensive meaning by looking at the combinations of inner concepts suggested by the glyphs.

“At best these ‘meanings’ are only approximate abbreviations for the concepts represented by the glyphs. But it is a place to start the search.”

“It appears strange to me,” said Aquarius, “that by the glyphs Adam is associated with passive movement, while Ashah is active movement. If Adam is a man and Ashah is a woman, are their traditional roles deliberately reversed in this story?”

“No one translation conveys the full sense of the original,” replied Pisces. “In an earlier chapter of these books of Moses it was shown that because Adam, the Universal Man, was created in the image of God, he has within him both active and passive principles. However, in tracing the evolution of Adam from when he was first created, the Universal, to the Collective ‘man’ found in the next chapter of Genesis, the translations have emphasized the literal aspect that encourages us to see them as physical images of a man and a woman.

“We have to be careful not to let the more recent translators’emphasis on the literal cloud a wider perception. For example, once they were committed to Adam and Eve as man and woman, there was no room left to recognize the aspect given in the original of Adam called Aish (Aleph--Yod--Shin). It is a Hebrew word that also means ‘man.’ Failure to distinguish Aish from Adam causes many problems. For example, in the creation of Ashah the story uses one aspect of the whole Adam, an aspect called Tsalla (Tsade--Lammed--Ayin). The translators called this the ‘rib.’ However, when the ‘Tsal’ concept was introduced much earlier in the story, it actually represents a particular relationship between God and man. It is reminiscent of what the Egyptians called the image, or sekhem, and later psychology calls ‘the shadow.’ By not recognizing this relationship translators missed some of the special qualities of Tsalla. The translation then failed to allow recognition of the properties of Aish that are, in fact, prime attributes of collective humanity, perhaps essential to the wish for action that characterizes this less general level of being.

“A recognition of Aish and his qualities of potential for manifestation represented in Yod, as well as active movement in Shinassists us in understanding the relation between Aish and Ashah in the story of the tasting of the apple. Adam, Aish, and Ashah are three interrelated principles that are important at different levels of being and are not confined to the qualities of the masculine and feminine. Overemphasis on these latter qualities limits the usefulness of the story as a guide to the search for a deeper understanding.”
Lloyd M. Dickie

Lloyd M. Dickie, Ph.D., has a master’s degree from Yale University and a doctorate from the University of Toronto. A retired ecologist and former professor of oceanography and biology at Dalhousie University, he has studied ancient Egypt for more than 30 years, including many active site explorations. He lives in Dartmouth, Nova Scotia.

Paul R. Boudreau is an ecologist and biologist who studies ancient myths and sites, including onsite explorations of Egyptian temples, tombs, and pyramids. He lives in Dartmouth, Nova Scotia.

“This remarkable study of myth is a jewel of dynamic scholarship involving both the profound mystical roots as well as the all-too-human dramas of ancient civilization. As such, it offers much-needed evidence that awakening higher consciousness may still be found in today’s threatened world.”

– Jacob Needleman, professor of philosophy at San Francisco State University and author of An Unknown

“A deep exploration of the psychological and spiritual meaning of ancient Near Eastern myths, with the aim of highlighting their relevance to the inner work of ‘self-development.’”

– Jeremy Naydler, author of Shamanic Wisdom in the Pyramid Texts, Temple of the Cosmos, and The Future

“Dickie and Boudreau’s insights are provocative and inspiring. Awakening Higher Consciousness is a must read for anyone interested in myth and its meaning.”

– Edward Malkowski, author of Ancient Egypt 39,000 BCE and Return of the Golden Age

“. . . provides new insights into view of ancient Egypt that seems to be coming more clearly into focus.”

“A valuable contribution to the growing body of work that overturns the still prevalent conceit that ancient mythology was the product of primitive minds.”

“I was very touched by the weaving together of science and myth in Awakening Higher Consciousness. Here are two scientists who dare to be fascinated by the power of myth and who bring us along on their voyage of discovery. An enthralling read!”

– Patty de Llosa, author of The Practice of Presence and contributing editor for Parabola Magazine