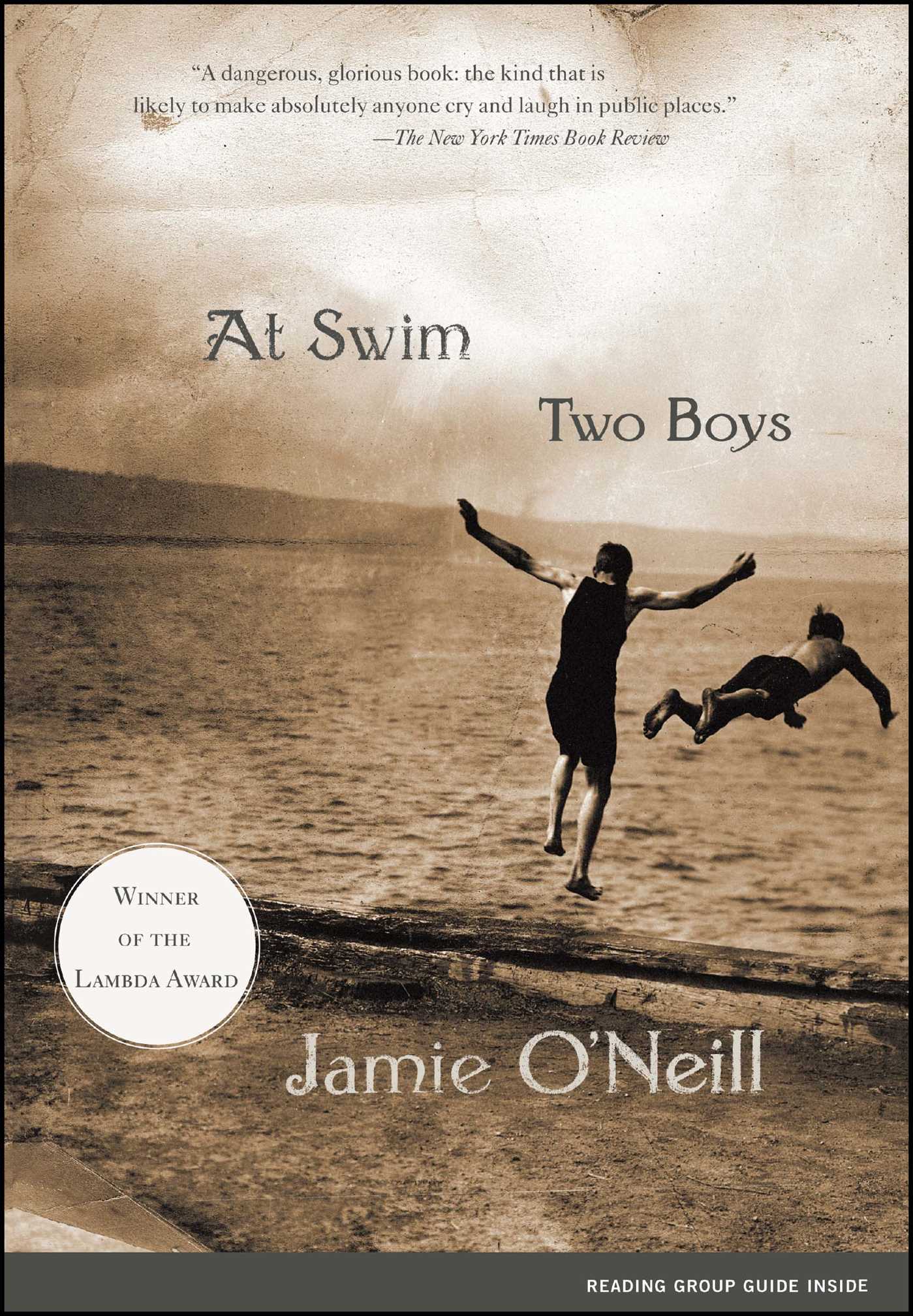 By Jamie O'Neill
LIST PRICE $15.99
PRICE MAY VARY BY RETAILER

Jim Mack is a naïve young scholar and the son of a foolish, aspiring shopkeeper. Doyler Doyle is the rough-diamond son—revolutionary and blasphemous—of Mr. Mack’s old army pal. Out at the Forty Foot, that great jut of rock where gentlemen bathe in the nude, the two boys make a pact: Doyler will teach Jim to swim, and in a year, on Easter of 1916, they will swim to the distant beacon of Muglins Rock and claim that island for themselves. All the while Mr. Mack, who has grand plans for a corner shop empire, remains unaware of the depth of the boys’ burgeoning friendship and of the changing landscape of a nation.

Set during the year preceding the Easter Uprising of 1916—Ireland’s brave but fractured revolt against British rule—At Swim, Two Boys is a tender, tragic love story and a brilliant depiction of people caught in the tide of history. Powerful and artful, and ten years in the writing, it is a masterwork from Jamie O’Neill.

By clicking 'Sign me up' I acknowledge that I have read and agree to the privacy policy and terms of use. Free ebook offer available to NEW US subscribers only. Offer redeemable at Simon & Schuster's ebook fulfillment partner. Must redeem within 90 days. See full terms and conditions and this month's choices.
A SCRIBNER
READING GROUP GUIDE
At Swim, Two Boys
DISCUSSION POINTS
1. The Irish have long been a storytelling people, and Jamie O'Neill is certainly no exception. He brings to life the Irish struggle for independence with an intensity and an honesty that is staggering. In what ways do you find O'Neill's writing to be reminiscent of that of other great Irish authors, both contemporary and classic? What techniques may O'Neill have borrowed from authors such as James Joyce, Flann O'Brien, Oscar Wilde, and even Frank McCourt?
2. Language, both in the narrative and, especially, in the dialogue between characters, makes this a rich and sometimes challenging read, but it also pulls us into the world of Ireland in a way that nothing else could. Why is language so significant in this novel? Discuss the ways that O'Neill wields words to shed light on individual characters and to illuminate the underlying forces that shape the tumultuous Ireland of the early 1900s.
3. Focusing on Aunt Eva, Aunt Sawney, Nancy, and even MacMurrough's Nanny Tremble, look at the different things women stand for in this novel. In what ways do their representational roles -- as church, as Ireland, as universal mother -- clash? Do they ever exist outside of these compartmentalized spheres? Also, does the novel suggest that women are above the weakness of the flesh, or that they are saintly beings? Is the author toying with the ideal of the Christian woman (holy and untawdried)?
4. Passion, lust, and love manifest themselves in very interesting ways in this story. While Jim and Doyler share a free and beautiful passion for one another, Brother Polycarp and MacMurrough are at times like sexual predators; one could almost say that they fall perfectly into the stereotypical homosexual deviant role that society perpetuates. To what extent do you think MacMurrough's predatorial behavior is a fulfillment of the expectations that society has for him as a gay man? Discuss the ways in which his love and desire for other men become subverted into lust and carnal desire though the lens of society's eye.
5. MacMurrough compartmentalizes his desires, his intellect, and his feelings of sympathy, empathy, and love in the voices of Dick, Scrotes, and Nanny, respectively. Are we to believe that he is literally schizophrenic? Or do these voices (and the way that they seem to meld into one voice by the end) point to larger themes?
6. Similarly, what instigates the transformation that MacMurrough undergoes throughout the course of the novel? Why does he seem, at least by the end, somehow freed from his self-hatred and ready to experience love again in the most selfless form? How much of this change can be attributed to Jim, who has a great capacity for love?
7. Symbols play a role of great importance in this story, and whether it is a flag, a stripe, a medal, or a religious emblem, the sacredness of these objects divides and unites the characters time and time again. What is it about the nature of symbols that makes them so powerful to these people -- and to all people, for that matter? Why, for instance, does Doyler's red badge mean so much to him? Do you think symbol worship in this novel verges on idolatry? Is it dangerous?
8. By the end of the novel, Jim seems set on more fighting. How do you feel about his choice to continue the fight? Are you left with a feeling of disillusionment? Do you think the author is making an overarching statement about war?
9. This novel, like some other covertly or overtly gay novels written in the twentieth century (The Well of Loneliness, Maurice, Giovanni's Room), ends in tragedy. Is this simply the plight of the gay character in modern literature? Is the reunion between Jim and Doyler in the last pages of the novel enough of a happy ending to make At Swim, Two Boys a novel of triumph rather than tragedy?
10. We watch as the characters in this novel struggle with their feelings of desire in a society that will not even recognize it. (Think back to the scene in which Jim tries to confess to the priest.) Discuss the ways in which Jim, Doyler, and MacMurrough try to rediscover a hidden history through the stories they tell one another about the Spartans. Why is having this history so significant to them? How does the notion of queer sexuality recycle, revise, and challenge traditional perceptions of gender in this novel?
Jamie O'Neill

Raised in County Dublin, Jamie O'Neill is the author of Kilbrack and At Swim, Two Boys, which won the Ferro-Grumley Award for Fiction and the Lambda Literary Award in Gay Men's Fiction. He lives in Galway, Ireland.

The New York Times Book Review A dangerous, glorious book: the kind that is likely to make absolutely anyone cry and laugh in public places.

Mark Harris Entertainment Weekly A work of wild, vaulting ambition and achievement...Rich and allusive, blisteringly exuberant...one of the most psychologically accurate and moving love stories in recent literature.

Robin Hemley Chicago Tribune In exquisitely sculpted prose, Jamie O'Neill...achieves a kind of richness of scope and ambition that makes one reluctant to come to its tragic and inevitable close.

By Jamie O'Neill
LIST PRICE $15.99
PRICE MAY VARY BY RETAILER