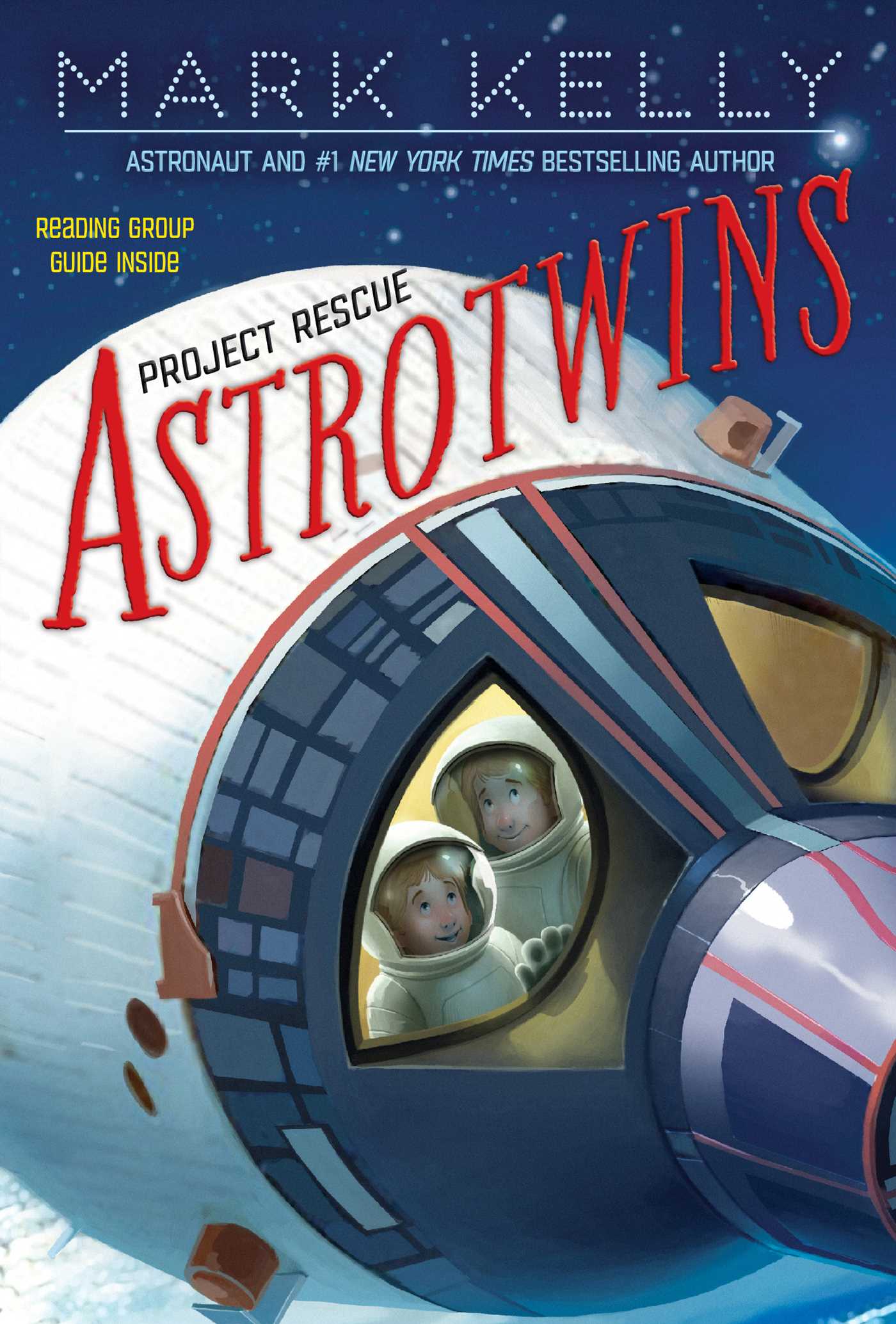 Part of Astrotwins
By Mark Kelly
With Martha Freeman
LIST PRICE $7.99
PRICE MAY VARY BY RETAILER

Twins Mark and Scott discover an abandoned Apollo command module and take off to rescue a stranded Russian cosmonaut in the second Astrotwins adventure from retired NASA astronaut and the #1 New York Times bestselling author of Mousetronaut, Mark Kelly.

Mark and Scott Kelly, who are mostly known for getting into trouble, are finally back from their first space adventure. The twins have wanted to explore space ever since they were little and watched Neil Armstrong walk on the moon. And when they hear that a Russian cosmonaut is trapped inside the Salyut space station now orbiting 220 miles above the surface of the Earth, they wish they could find a way to help.

While staying in the countryside at their grandfather’s house with their friend Jenny (aka Egg), the twins repurpose a NASA Titan 2 rocket ship being stored nearby. Complete with spacesuits and snacks, the twins take off on their rescue mission. Will they ever see their family or their grandfather’s backyard again?

Written by a NASA astronaut with four space flights under his belt, the second exciting Astrotwins story includes extensive back matter on the space program with fantastic facts and details.

“Can I get some help here?” Mark asked his twin brother, Scott.

It was after lunch, and the two twelve-year-olds were kneeling on the carpet in the living room of their house. Sprawled between them, Major Nelson thumped his tail; dog rescue was the best game yet!

The boys had a real oxygen mask, one with perforations to allow air flow. But in place of an oxygen tank, they were using a big soda bottle, its cap replaced by a valve made out of cardboard discs. For tubing, they had taped together plastic drinking straws. The flimsy homemade setup didn’t look very realistic, but it gave the boys a way to practice for tests in their Red Cross first-aid class—or, for that matter, real emergencies.

“You are not very funny,” Mark told Scott. “Now do me a favor and keep the mask on his nose while I hook everything up.”

Scott did as his brother directed while at the same time scratching Major Nelson behind the ears. “You’re a good dog—yes, you are!”

“Ha!” Mark pumped his fist. “He’s connected! How long did that take, do you think?”

Scott shook his head and sighed. “Too long. Our dog is dead.”

“Oh, cut it out,” Mark said. “Maybe when Mom gets home she’ll let us practice on her.”

“You know she’ll say she’s too busy,” Scott said. “And besides, we don’t have that much time. We gotta meet Barry at the library at two thirty.”

Mark made a face. “I forgot about that. Can you believe we have to go to the library? Again?”

“I know. I thought we were done with libraries forever after all the research we did last summer. But if we’re going to write that report, we need to,” Scott said.

Mark’s face brightened. “I just thought of something. Barry’s a brainiac! He can do all the hard parts, and we’ll just draw pictures or something.”

“You probably can’t screw up writing your name,” said Scott, “even if you did suffocate Major Nelson.”

“Don’t blame me. The mask was made for a human, not a canine,” Mark said.

“We could practice on each other,” Scott said, “and since it’s my turn, you’re the one who has to lie down, be quiet, and pretend you’re super sick. Ready—go!”

Mark shook his head. “Like I’m gonna let you press that thing on my face! Why would I even trust you?”

“Uh . . . because I’m the only brother you’ve got? And I trusted you when I went into space last fall.”

“At least you had a clean faceplate on your helmet,” said Mark. “This mask is gross—covered with dog drool.”

“Aw, look, you’ve hurt his feelings.” Scott waved the mask as if he was about to clamp it over his brother’s nose, his brother swerved out of the way, Scott hooked him by the elbow, Mark lunged, and an instant later the two boys were on the floor, wrestling . . . much to the delight of Major Nelson, who howled his encouragement.

The match, punctuated by thumps, bumps, and grunts, came to an abrupt end when Mom appeared in the doorway. “Boys?”

Mark was out of breath but still managed to say, “He started it!”

“Well, maybe I did start it,” Scott admitted, “but I’m not the one with a bad attitude about first-aid class.”

“At least I practice,” Mark said. “You just sit back and watch.”

“Yeah—watch you suffocate patients,” Scott said. “I just hope to heck you never have to save anybody for real, ’cause if you do, they’re done for.”

“Hold on a second.” Mom had been eyeing her sons from the doorway. Now she came into the room and sat down on the sofa. “I thought you guys liked the class.”

“We do,” Scott said quickly.

Mom raised her hand. “Leaving that aside for now—what gives with the class?”

“It’s just we’re never gonna have to use this stuff,” Mark said.

Scott chimed in. “Nobody counts on kids to save lives, Mom. They count on doctors and nurses and ambulance people. They count on cops sometimes. But we’re not old enough for those jobs.”

Mom cocked her head and smiled. “This line of reasoning’s kind of funny coming from you two.”

Mark by this time had sat up and assessed his injuries. There seemed to be a bruise on his shoulder and another on his head, but that was okay. He was pretty sure he had given as good as he got. “What do you mean?” he asked his mom.

Mom nodded. “That’s exactly what I mean. Going into space is something not many kids have done.”

“Technically, it’s something no kids have done . . . except Scott,” Mark said.

Sometimes each twin could tell what the other was thinking. Now they looked at each other and decided without a word that Scott should ask their mom the obvious question: “Uh, what’s your point?”

“That you boys get yourselves into more than the usual number of tough situations,” Mom said, “and I know from experience what a lousy feeling it is when somebody needs help and you don’t know what to do. This class is going to give you the knowledge you need to be helpful. And I bet one day, sooner or later, that knowledge is going to come in handy.”

Scott Kelly never mentioned it to anyone, but he had a mental filing system for grown-ups’ comments. That little speech of his mom’s he filed in the category: Stuff I Probably Should’ve Paid Attention To.

And the way things turned out, he was absolutely right.
Mark Kelly

Mark Kelly is a retired astronaut and US Navy Captain. His picture book Mousetronaut, illustrated by C. F. Payne was a #1 New York Times bestseller. He flew his first of four missions in 2001 aboard Space Shuttle Endeavour, the same space shuttle that he commanded on its final flight in May 2011. In 2020 he will be running to represent Arizona in the United States Senate.

Part of Astrotwins
By Mark Kelly
With Martha Freeman
LIST PRICE $7.99
PRICE MAY VARY BY RETAILER