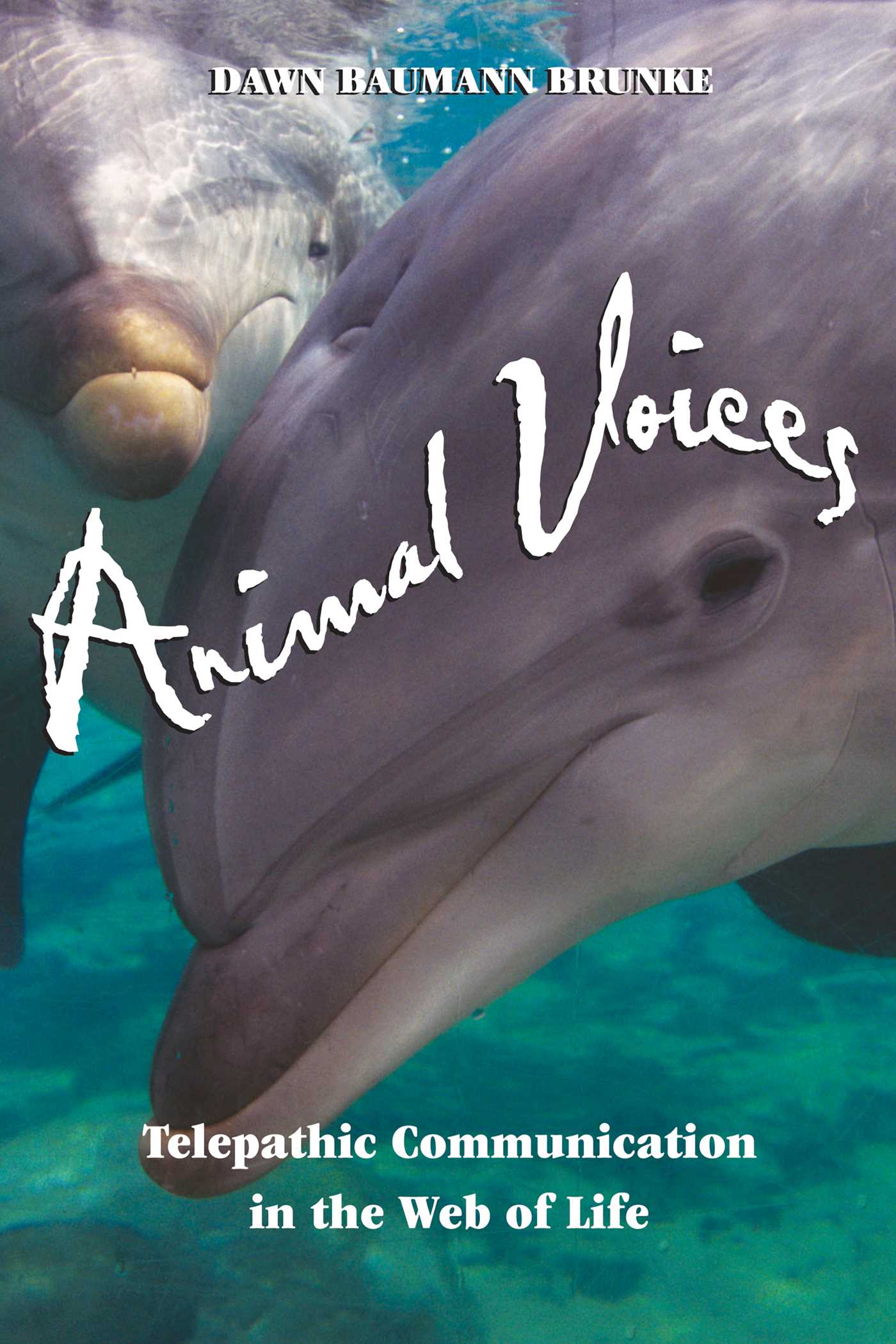 Animals ranging from mosquitoes to elephants use their own words to guide humanity to a deeper spiritual awakening.

• Contains interviews with 25 professional animal communicators and over 100 different animals and animal spirits.

• Provides a thrilling glimpse of the possibilities of direct animal-human dialogue.

According to Echo, an Arabian mare, "Humans are beings of love who have forgotten what love is and who they are." Along with a host of other animal communicators, Dawn Baumann Brunke gives animals like Echo a voice--a direct line of communication to the human mind. Through Animal Voices, the animal kingdom delivers a message about deepening our spirituality and reconnecting with the web of life.

Our earliest ancestors had an ongoing shamanic dialogue with the animal kingdom, but this ability has been lost to most in the modern world. Brunke provides the techniques to reopen these connections, reminding us that when we are open to communication with animals, we are open to deeper layers of ourselves.

The main contributors to this book are actual animals, who reveal themselves to be sentient beings with their own thoughts, emotions, and spiritual reasons for being on the planet. How Brunke overcame her initial skepticism and learned to hear their voices is a fascinating story. Throughout Animal Voices the author integrates her own reflections with those of the animals she interviews. The result is something that will delight animal lovers and force skeptics to reconsider their ideas about the nature of animal consciousness and the possibility of telepathic human-animal communication.

Zak:
Beyond Karma and Back
"The dog form itself is just an illusion; it really doesn't have much consciousness. The only thing that enlivens this body is the spirit. The spirit has awareness of the matter."
~ Zak

Looking at Zak--strong, compact, reddish golden furred, deep brown-eyed Zak who loves to race and chase balls and have his belly rubbed--it was hard for me to take in this business about energy-packet dogs and a group of light beings from another planet. Multidimensionality is a fun concept, but when it comes calling up close and personal, there are certain costs involved.

A few weeks after talking with Raphaela and Sugar the dolphin, after opening--slowly, cautiously--to the idea that things may indeed be quite a bit different than we have been taught to believe, I resigned myself to the idea that it was finally time to explore a little bit more about what Zak had to say.

And so one afternoon as I plucked up my courage to sit before him, quieting my mind, I asked Zak about this other planet. What I expected I don't know, though most certainly I didn't expect Zak to laugh at me or so quickly amend the thought that where he came from was even a planet at all.

"That was more like a joke," he said, as if to imply that my own concept of space-time was so limited that all I could understand about where he was truly from was that it was like another planet.

Perhaps the shock value of the unexpected was what he had been waiting for, because in my surprise, a whole
slew of thought-images came rushing into consciousness. There was nothing first, second, third about it, and yet the material was cohesive and patterned in a way that everything flowed together seamlessly. In that odd, out-of-time manner, the experience was sharply focused in the now:

Zak relates that he is connected to a group of beings who literally make up their planet, for the light bodies of these beings can create any kind of world or "planet" they choose. The group of beings is similar in some ways as to what we might think of as a fraternal order, yet much more. They come to this world both to give energy and stabilize energies. "You can call me The Neutralizer," Zak says with a laugh.

Zak comments that the members of his group come without karma or karmic attachment. They have a very direct and focused connection in this regard. "We come to do our job, do it, and that's that." But many of the group who come to this world enjoy their lives as animals, and this is sometimes regarded as one of the "benefits of the job." I take this to mean that they enjoyed the freedom of being an animal.

He emphasizes that his group does not make karmic attachments of emotion in the way some other animals do. He tells me they don't usually come back over and over to work with the same souls. Rather, his group is mainly about "service," and that they come with "packets of energy." At this point, he gives me the image of a computer component, rather like a zip drive with a zip disk. I understand that, metaphorically speaking, it is a packet of energy that is used to help boost other energies and neutralize "stuck energies."

By stuck energy, do you mean karma or emotional holds on the body, I ask, and he tells me yes, that his job is to streamline our focus, smooth away the sticky or uneven edges so we can move forward, or expand with more clarity. He tells me he is like a pumice stone, smoothing away things that might otherwise slow us down.
The order is very giving in this sense of service, he says, and I get the feeling-thought that there is not a lot of emotional attachment in this group. In fact, there is a sense of aloofness in the group, as if they are closer to spirit in composition, not so personal or ego oriented.

When I ask if there is anything he or his group would like to say, Zak dictates the following:
There are many ways to manifest the spirit. Choosing how you will manifest is dependent upon a number of variables. How much light you allow in your consciousness, your body, your level of understanding is an aspect of clarity - of "where you are" in your perspective. Holds in the body are holds on spirit. We are here to unhook, unhold, unzip the body - to a degree. We are helpers of humanity and of others as well. Most of us work with a number of energies in one life. We also have communication with the others in our group.

As I came out of the relaxed communicative state, I felt the familiar stirrings of frustration. How could anyone possibly verify this information?

With a look of amusement, Zak turned to walk away, though not without tossing me a bone. He said that of all the animals I had interviewed thus far, the horse named Echo would know about his group. If I felt a need for confirmation, I was to ask Echo. Zak further commented that while Echo was not of the same order as he was, Echo had knowledge about his group and would be able to confirm it to some degree.

It was a peculiar feeling to be both so highly amused and utterly frustrated by a situation, though I was getting used to it. I watched Zak trot from the room, his white plume of a tail held high in the air, while I contemplated the situation: Here is a dog who is really an enlightened being without karma, who has come to help my other dog and me, and if I want to know if this is true, I should ask a horse.
Dawn Baumann Brunke

Dawn Baumann Brunke is a writer and editor who specializes in the areas of healing, dreaming, spirituality, animal communication, and deepening our connection with all life. The author of Animal Voices: Telepathic Communication in the Web of Life, Shapeshifting with Our Animal Companions, and Animal Voices, Animal Guides, she lives with her husband, daughter, and animal friends in Alaska.

Visit her web site at www.animalvoices.net.

"Dawn answers major questions raised by the mind-stretching implications of animal intelligence and telepathic communion between all beings with both the heart of an excited student who has recovered a long lost dream and the mind of a detective, tentatively and skeptically uncovering and dissecting a great mystery."

"Powerful! Moving! A compelling journey reminding us that the wisdom of the animal kingdom offers a window to our own inner mysteries. Through personal experience and intimate case histories, Dawn Brunke has masterfully crafted a 'must read' for skeptics, and animal lovers, alike."

"This is an important and amazing book! With grace and eloquence, Dawn takes the reader on a wondrous journey into the rich potential of the human-animal connection. Packed with profound insights and joyful surprises, Animal Voices is educational, entertaining, and extremely pertinent to the urgent need on our planet for a deeper understanding of all life."

"To those of us who have always belived in and lived within the sacredness of all life, those just awakening to it, and those needing to hear the message, Dawn gives us a profound gift in herself and Animal Voices that can do no less than greatly assist the healing consciousness now finally arriving on this planet. Thank you, Dawn, from the Heart of All That lives!"

"Dawn Brunke takes us through her incredible journey as she learns about animal communication. She teaches the reader that animals are our teachers -- they teach us to trust ourselves, and as a result of that trust we learn who we are. From skeptic to believer, this book will bring the reader a new insight to the world of Animal Communication."

– Carol Gurney, Animal Communicator Author of The Language of Animals

"Animal Voices cuts through the shadow of our projections and beliefs about animals with both warmth and wit. These loving and wise messages from our feathered, furred, and exoskeleton-clad kin will move hearts and minds in new directions, inspiring even the most skeptical reader. Provocative, healing, and a must read for anyone who has opened his or her heart to another species."

– Joanne Lauck, author of The Voice of the Infinite in the Small: Re-visioning the Insect-Human Connec

"We are proud to recommend this book. . . . It is well written, a joy to read, drawing us in fascination through the chapters."

"Her determination to accurately record the information she and other communicators received gives us an unusual glimpse into the lives of many animals."

"I highly recommend Animal Voices to every two-legged who feels ready to learn from our furry, feathered, scaly and winged friends!"

"Animal Voices offers us yet another unique way of tapping into the web of life."

"It is one of the most important general animal and animal communication books to come along in quite a while."

"After reading Animal Voices I understood how talking with animals could be possible, even for me."