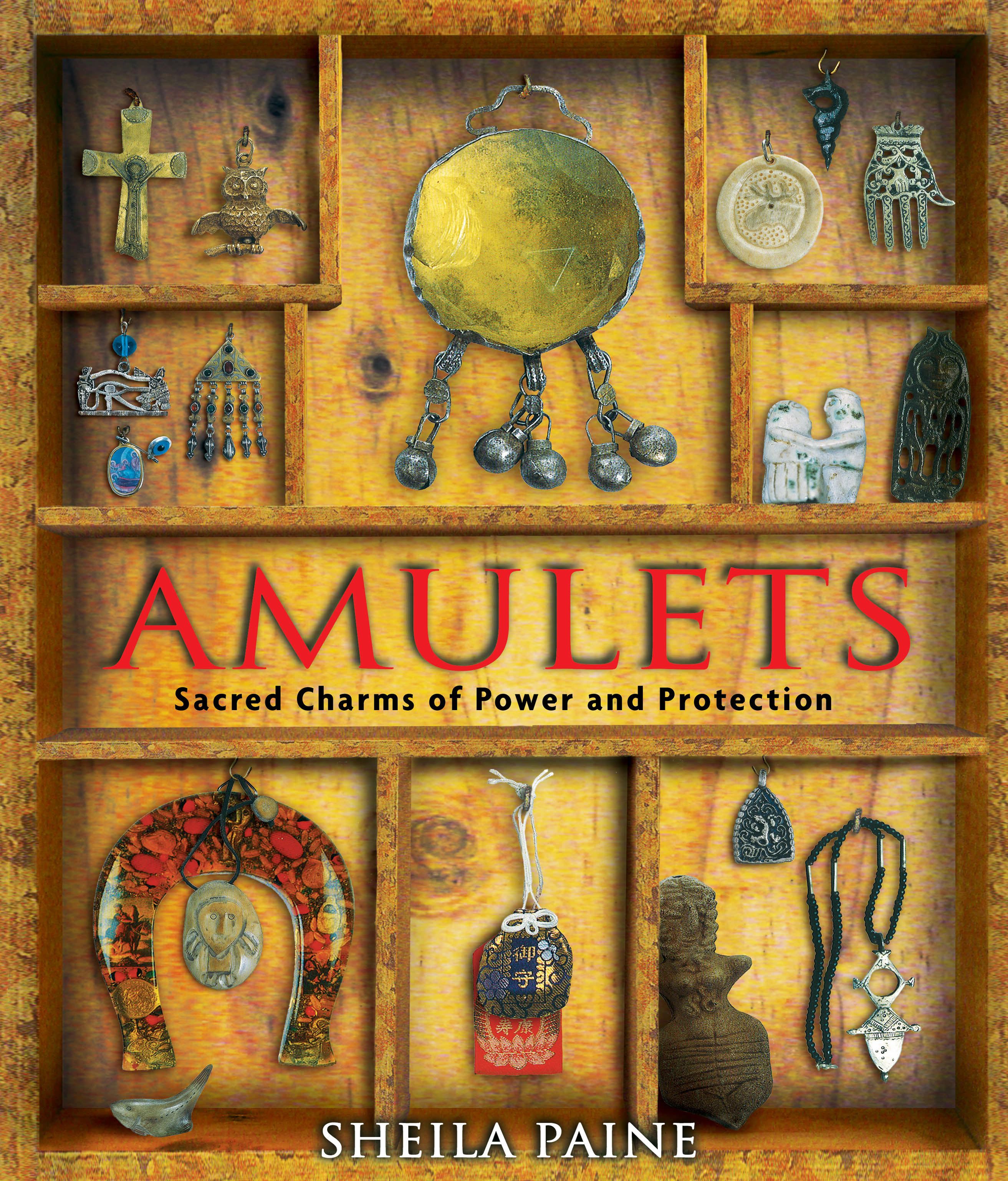 Sacred Charms of Power and Protection

• Explores not only the substances and symbolism from which amulets derive, but also the people and objects they protect

• Explains the differences between and the purposes of amulets, talismans, charms, and fetishes

All over the world and throughout history amulets have offered protection against negative forces, whether witchcraft, the evil eye, enemies, sickness, or accidents. Intricately beautiful or starkly simple, they come in an astonishing variety of guises: from stones, shells, and seeds, through animal tails, teeth, and claws, to beads, mirrors, needles, and bells.

With over 400 lavish color photographs, this book explores amulets from every angle, including their symbolism and the diverse material used to craft them as well as the people and objects they protect. Sheila Paine traveled all over the world--from Afghanistan, Russia, and Albania, to Cameroon, Tunisia, and Mexico--to research the form, properties, and use of amulets, whether for health and safety or as channels for spiritual or magical powers. Worn as necklaces, sewn to clothing, painted on buildings, or hung in vehicles, amulets guard babies and brides; warriors, hunters, and travelers; livestock, crops, and homes through magical, not physical, means. Malign spirits and hobgoblins at crossroads have been feared since ancient times, but modern dangers--car crashes, new diseases, even cell phones--have ensured an abiding faith in the magical protection that amulets afford us that is still widely evident today.

As the worst epidemic of the plague since it first appeared in the sixth century swept across Europe and reached the canton of Basel in1329, the good burghers of Switzerland looked for a scapegoat and picked on the innocent Jews. They had deliberately poisoned the wells. The entire Jewish population of the city was rounded up on an island in the Rhine and burnt to death. Still the plague raged, unfavourable star configurations now being blamed, and the atmosphere of terror continued. Amulets were deemed the only protection. Pieces of paper printed with pictures of saints were folded into small packets around scraps of red ribbon and tiny cuttings of plants, then wrapped in a piece of fabric and worn. 'Plague cushions', they were called, and such amulets were used all over Europe.

In the Great Plague that scythed through Europe and hit London in 1665, the disease was believed to be caused by the wrath of God and spread by the bad odours emanating from the sick. On still days, church bells were rung and shots fired to drive off the disease by moving the air. Birds were kept in rooms to sing and create draughts. But strong-smelling amulets, pomanders of cloves and spices, were the best protection, while in Catholic Europe the holy plague healer St Roch of Montpellier, who had helped victims of the Italian epidemic in the fourteenth century, was featured on amulets, together with St. Sebastian, whose torture by arrows was akin to the pain suffered by victims of the plague.

It is particularly in such a climate of deadly pestilence caused by forces unknown and not understood--as in the case of AIDS in Africa today--that the power of amulets thrives. Illness, until well into the nineteenth century, was believed to be the work of evil spirits, demons, witches, the evil eye, magic, angry gods or ancestors. In the face of such supernatural forces a magical defence acquired its own rationality, though the power of such defence and the dangers it confronted were--and in many cases still are--conceived differently in different parts of the world.

There is, above all, a widespread belief that all things in the natural world have a spirit and a power that links them, including man, together. An amulet is part of such a system of natural and magical force The invisible aura of an unusual stone, the perfume of a pungent plant, the tortured shape of a root, the soaring power of an eagle, all such phenomena can be used to redress the imbalance of evil influences.

The world is also conceived in many cultures as a three-layered abode: the upper inhabited by birds and spirits (and encroached by horns and hair), the lower the domain of water animals and creepycrawlies, the middle a complex animal habitat in which humans play merely a part. All must be kept in harmony.

Within this earthly and celestial world, concepts of the symbolism of astrology, of numbers and colours, of alchemy and magic, of wind, sun and moon are all harnesses into the power of amulets. And into this world intruded, usually with considerable distaste, the established religions of Islam, Christianity, Judaism, Buddhism, Taoism, Shinto an Hinduism. In place of the gods of Babylon and Egypt, and the fetishes of the animists, came inscriptions from the Koran, holy texts of the Orient, footprints of Vishnu, and images of Christ, Madonna and the saints.

The story of amulets is a continuous one from prehistoric times to the present day. Texts from Sumer show that the evil eye was known from about the fourth or third millennium BC, while amulets survive in huge numbers from Ancient Egypt. A Chinese jade amulet of a boar-dragon from the Hongshan culture of about 3600 to 3000 BC is drilled with a hole to wear as a pendant and is similar to objects six thousand years old. They were used as ritual offerings to deities and spirits for protection, while later ones of the Eastern Zhou dynasty, such as the emperor's amuletic pendant of around 400 BC made of white jade hung on red strings as stipulated in the Book of Rites, were also a sign of status. From 2000 BC stone amulets have been discovered in the Ferghana valley and nearby Bactria in north-western Afghanistan, one in the form of a double snake, and one a ceremonial camel; a chain of gold amulets from the Hallstatt period of the early Iron Age was found at Prozor in Croatia; the nomads of the steppes buried cowrie amulets in their tombs at Pazyryk in about 400 BC. Later nomadic amulets of cowries, and also of animals, figures and hands, were found in the kurgan burials of Crimea dating from between the first century BC and the second century AD. In Ancient Greece and Rome the evil eye was still feared and confronted by amulets, of which Pliny the Elder was the first to write. A pre-Columbian amuletic figure of clay from Peru wears gold earrings, while its future conquerors in medieval Europe could read recipes for amulets, published in Le Grand et le Petit Albert, attributed to the thirteenth-century alchemist and philosopher Albert le Grand, and later in Le Dragon Rouge, first published in 1522.

Exotica such as powdered armadillo, pulverized pikes' teeth or peacock semen were prescribed to be swallowed, but an alternative was to enclose such magical ingredients in the form of something to be worn, or strategically placed. This amulet could be worn on the body, hung on an animal, placed at a threshold, used wherever protection was needed and whenever disaster or pestilence threatened people's lives.
Sheila Paine

Sheila Paine is an expert on tribal societies and textiles and is the author of Embroidered Textiles: Traditional Patterns from Five Continents and the trilogy The Afghan Amulet: Travels from the Hindu Kush to Razgrad, The Golden Horde: Travels from the Himalaya to Karpathos, Amulets and The Linen Goddess: Travels from the Red Sea to Prizren. She lives in England.

". . . an in-depth focus which reveals the past, present, and future of amulets in all their symbolism and power."

"In this opulent book filled with full color pictures of headresses and houses, textiles and jewelry, Sheila Paine takes an anthropological and historical look at the symbolism and materials of these charms, fetishes and talismans."

"A beautiful book for the art afficionado or charm enthusiast."

“Amulets’ mystical appeal gives them a place among the world’s religions--and in our everyday lives.”

"The amount of information collected in this book is nothing short of astounding, making this the ultimate ference book."

"This book should be included in every Pagan's library."

". . . each photo brings the vibrancy and color of the culture of amulets: teeth, feathers, beads and mirrors."

". . . containing full-color photos of genuine amulets on nearly every page, this book is a survey of creaativity and bekief from around the world."

Sacred Charms of Power and Protection