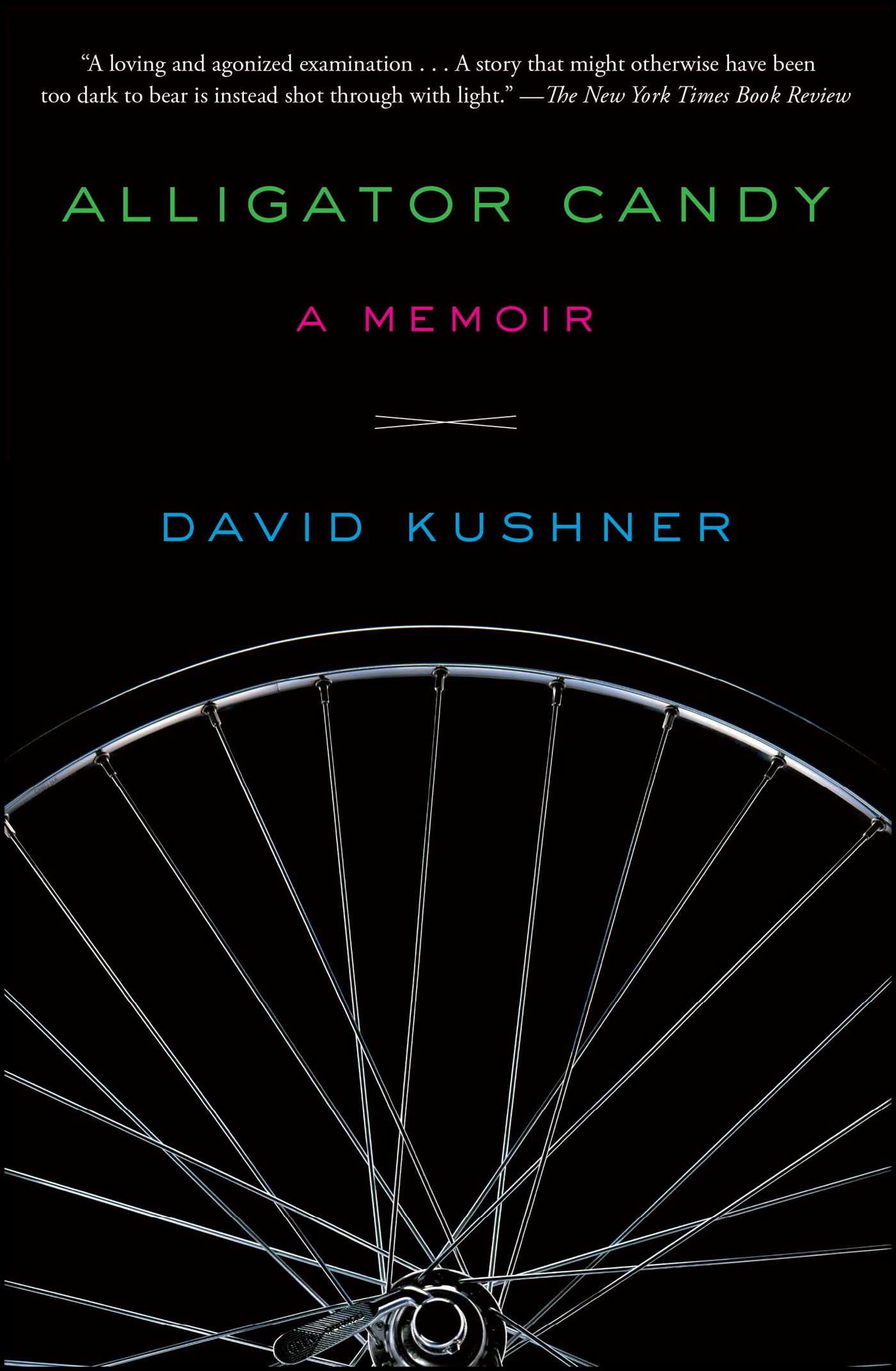 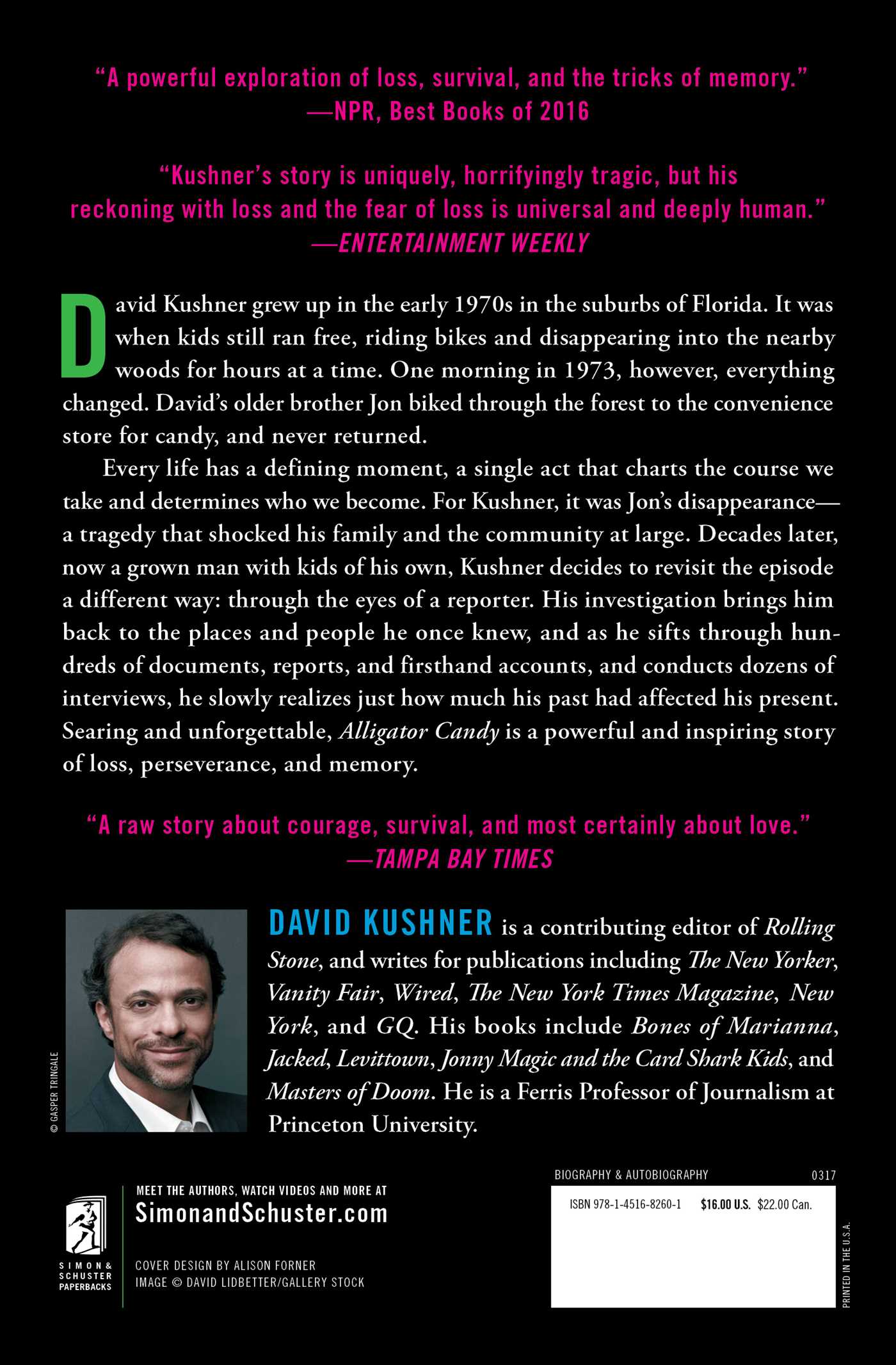 By David Kushner
LIST PRICE $16.99
PRICE MAY VARY BY RETAILER

From award-winning journalist David Kushner, a reported memoir about family, survival, and the unwavering power of love—and the basis for the podcast Alligator Candy.

David Kushner grew up in the early 1970s in the Florida suburbs. It was when kids still ran free, riding bikes and disappearing into the nearby woods for hours at a time. One morning in 1973, however, everything changed. David’s older brother Jon biked through the forest to the convenience store for candy, and never returned.

Every life has a defining moment, a single act that charts the course we take and determines who we become. For Kushner, it was Jon’s disappearance—a tragedy that shocked his family and the community at large. Decades later, now a grown man with kids of his own, Kushner found himself unsatisfied with his own memories and decided to revisit the episode a different way: through the eyes of a reporter. His investigation brought him back to the places and people he once knew and slowly made him realize just how much his past had affected his present. After sifting through hundreds of documents and reports, conducting dozens of interviews, and poring over numerous firsthand accounts, he has produced a powerful and inspiring story of loss, perseverance, and memory. Alligator Candy is searing and unforgettable.

Alligator Candy 1
MY LAST MEMORY of my brother Jon was my most suspect. It was October 28, 1973, and we were on the sidewalk outside our house. I was a stocky four-year-old with a brown bowl haircut, and Jon, wiry and lean with wavy red hair, was eleven. Earlier that year, we’d moved to this small ranch house with a red Spanish-style roof in Tampa, Florida. It was the northern edge of the burgeoning suburbs, a new home on the newest street by the woods. For the kids in the neighborhood, the woods represented the great unknown, a thicket of freedom, a mossy maze of cypress and palms begging to be explored. Kids ventured into there on horseback, barefoot, on bikes. They had worn a path to the 7-Eleven convenience store across the woods, and that’s where Jon was heading this day.

Jon straddled his red bicycle, aiming for the trees. These were the Easy Rider years, and boys’ bikes were designed to resemble motorcycles, the kinds we’d see driven around town by Hells Angels. Jon’s bike had a long red banana-shaped seat, shiny chrome upright handlebars, and fat tires. For added effect, kids would tape a playing card in the back spokes to sound like a motorcycle when the tire spun. They’d lower their heads, extend their arms, and hunch their backs as they pedaled, visions of Evel Knievel in their minds.

My parents had given Jon a green ten-speed Schwinn for his birthday in September, but for some reason he decided to ride his old one this morning. Maybe he wanted something more rugged for the woods or just wanted to take one more spin on his old bike before retiring it. He wore a brown muscle shirt and cutoff blue jean shorts embroidered with a patch from his day camp, Camp Keystone. His sneakers were red, white, and blue Hush Puppies. I could tell by the way his feet bobbed on the pedals that he was anxious to leave.

“You’re going to forget,” I told him.

I wanted something specific from the store: Snappy Gator Gum. It wasn’t just gum, it was a toy. The gum came packed in the mouth of a plastic alligator head that opened and closed when you squeezed the neck. I had to have it and didn’t want anything to get in the way.

“What if it rains?” I asked Jon. I was thinking about an afternoon at our last house, when Jon had biked to a store shortly before a torrential Florida downpour. I remembered standing next to my mom in the kitchen when Jon called, and my mom telling me that we had to go pick him up in the station wagon because he was, as she said, “caught in the rain.” I hadn’t heard that phrase before, and it struck me as strange. I pictured Jon literally caught in the rain, stuck in suspended animation, hovering in a cage of falling drops.

“If it rains I’ll call,” he promised.

“Call me anyway when you get there,” I said, “so I can remind you what I want.”

Jon grabbed the handlebars and pedaled quickly down the sidewalk toward the woods. I watched him ride off, still wishing I could go along. I never saw him again. It would take decades to unravel what happened. But my search would always lead me back to this spot. 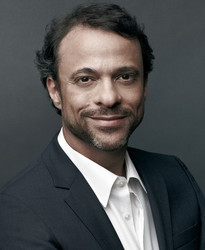 “A raw story about courage, survival and most certainly about love.” —Tampa Bay Times

“Kushner's moving book is not only a memorial to a brother tragically deprived of his right to live; it is also a meditation on the courage necessary to live freely in a world riven by pain, suffering, and evil. A probing, poignant memoir abouttragedy, grief, and trying to cope.” —Kirkus Reviews

“Kushner’s riveting memoir, Alligator Candy, begins by asking how any parent or family can survive such unimaginable evil and devastating grief….Parents today can understand the love, hope and fear he so eloquently describes in this account of one family’s transcendent courage in the face of crushing pain.” —Bookpage, "Top Ten Book of the Month"

"A powerful exploration of loss, survival and the tricks of memory." —NPR, Best Books of 2016

By David Kushner
LIST PRICE $16.99
PRICE MAY VARY BY RETAILER