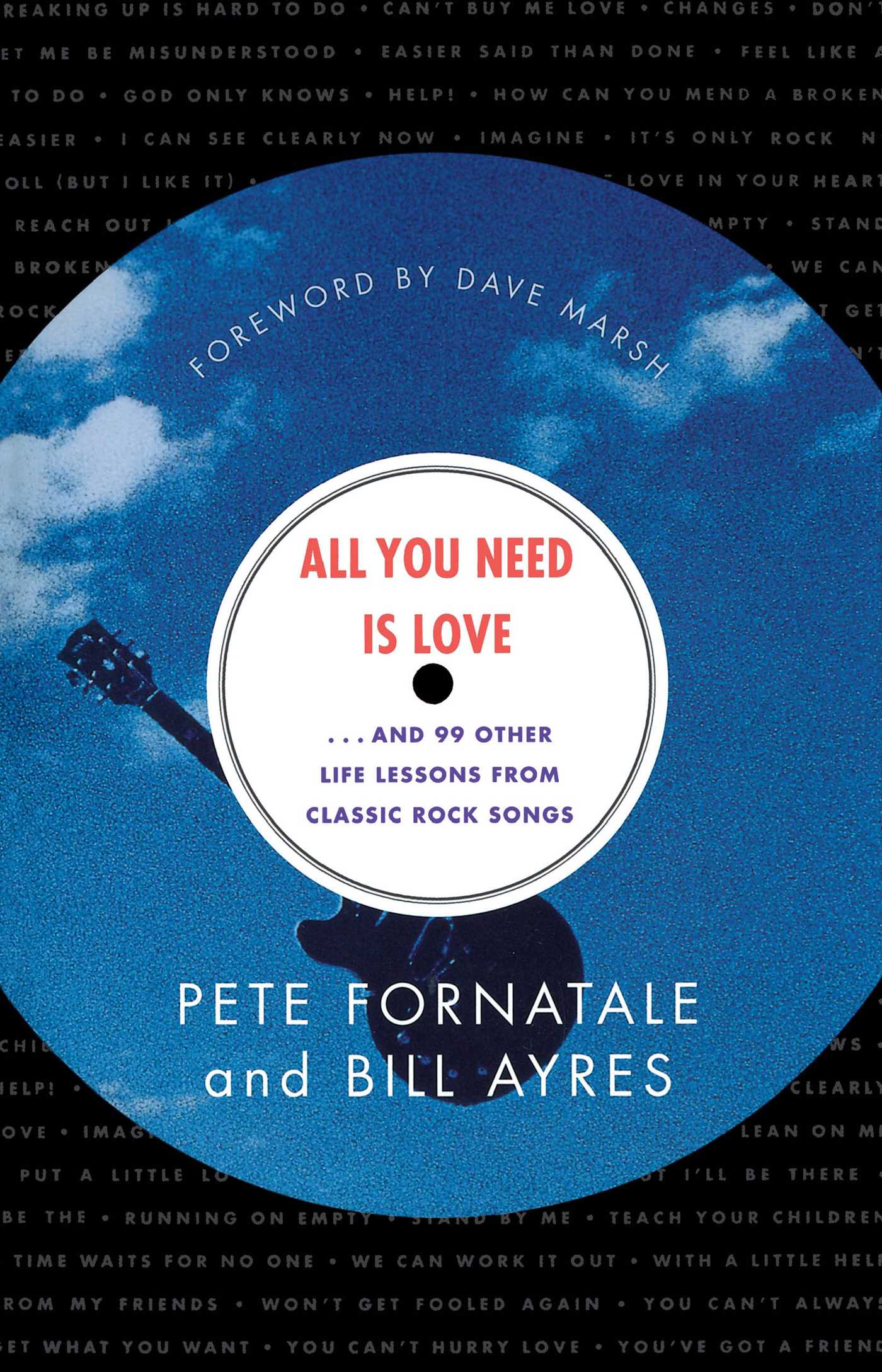 All You Need is Love

And 99 Other Life Lessons From Classic Rock Songs

By Bill Ayres and Pete Fornatale
LIST PRICE $16.95
PRICE MAY VARY BY RETAILER

It's Not Only Rock 'N' Roll! It's Rock Wisdom
It's the insights and messages that come to us from 100 of our favorite rock songs. Love and marriage, family, friendships, self-esteem, spirituality, and community are just some of the themes explored in these healing and uplifting meditations, based on four decades of classic rock by artists like the Beatles, James Taylor, the Rolling Stones, Bob Dylan, Carole King, Bruce Springsteen, the Beach Boys, and dozens more. You'll also find background information on the songs and artists, as well as suggestions for applying these nuggets of rock wisdom to your everyday life. All You Need Is Love is a visit to our past and a companion for our present and future.

A MATTER OF TRUST

From the very beginning of his career, Billy Joel was known as the piano man. It wasn't only the title of his breakthrough album and a big hit single, it was also the perfect image for a man who had worked out some of his greatest music at the keyboards, and who never failed to display his dazzling mastery of the instrument in concert. So, in 1986, when Billy strapped on a Stratocaster for his new song "A Matter of Trust," fans sat up and took notice. Was the piano man abandoning his keyboard for the more traditional pose of the guitar hero? Not really. Playing guitar in the video and in concert gave Billy the opportunity to roam the stage more freely, but the actual guitar playing on the track was done by David Brown and Russell Javors. "A Matter of Trust" was released as a single from The Bridge album and rose to number ten on the charts.

Many years ago, a college friend called two nights before his marriage to his high-school sweetheart. They had just had a terrible fight that started with some wedding preparation minutiae, and then went ominously deeper into the darkest corners of their personalities. He said "I thought I knew everything about her after all these years, but I learned things tonight I did not think could possibly be true."

Love is, as Billy Joel says, a matter of trust, and trust does depend on knowing the other deeply. That does not mean having controlling knowledge that can anticipate every thought, every move. Trust is based on touching the mystery in your beloved and being touched in return, which calls for vulnerability in both of you. If you or your partner never reveal yourselves to each other at an intimate level there will be no basis of trust. As you do open yourselves, trust will grow.

It would be wonderful if trust was only that easy. You both keep revealing yourselves, respecting each other for whom you are, and building trust upon trust. In reality, trust is also built on shared pain, disappointments, a series of minor betrayals, and often major betrayals that rock the very foundation of your relationship. All that you have carefully built seems to disappear before your eyes, as in the story of my friend just before his wedding. Then, after the waves of suffering and anxiety pass, you look again with the eyes of love and you can still see love coming back your way. Trust is slowly restored although shadows remain. By the way, our friend did go through with the wedding and, yes, they are still married.

* Trust is essential in all relationships, but especially in that most important of all, the one with your significant other. How would you describe your trust in this relationship: total to near total, strong in some areas but weak in others, or diminishing to minimal?

* Trust is not static, it either grows or decreases. What is the state of trust with your partner now? Is it better or worse then this time last year?

* Have you already successfully built trust in your relationship? How can you apply some of those well-learned lessons to a problem of trust now?

Dion DiMucci was almost a victim of the British invasion. After years of success and hit records with and without his Bronx-based group, The Belmonts, Dion virtually disappeared from the pop spotlight in the wake of Beatlemania. But, then, in 1968, he reinvented himself as an urban blues/folksinger, and touched a national nerve with Dick Holler's song about assassination called "Abraham, Martin and John". Dion was back on the charts with a hit that climbed to number four in November of 1968. (In a delicious bit of irony, The Beatles paid homage to Dion by including him in the montage of their heroes on the cover of Sgt. Pepper's Lonely Hearts Club Band.)

I was at a book sale at school, when I heard on the radio that President Kennedy had been shot and was dying. I also remember when I first heard the news of Martin Luther King, Jr. and Bobby Kennedy's deaths. They were not only my heroes but the heroes of my generation, of our whole country. It often seems that courage is rewarded with death, but then, the memory of heroes, the power and goodness of the heroes lives on even after we learn of their tragic flaws.

We grow up believing that our heroes can do no wrong, that there are people, sometimes beginning with our parents, who are nearly perfect. Suddenly or gradually, the bubble bursts and we can become terribly disillusioned, even as adults. Yet the deeds of our heroes remain, their courage remains, and the help that they provided changed the lives of millions for the better.

Heroes are not saints, and even saints are far from perfect. Heroes usually do not set out to be heroes. They do not train for the role. They are there at the right time, and respond to a crisis. They choose, often at great sacrifice and with reluctance, to take a leadership role, and the power of their personalities and actions attracts followers and makes a difference.

* Are there any national or international figures today that you would consider heroes? Who? Why do you believe that they are heroes?

* Are there any other national or international figures that you once considered heroes but do not now? Why did you change your mind?

* Are there personal heroes from your past or present, people who were role models for you from your family, friends, school, job or some other personal contact? What made them heroes? How have they made a difference in your life?

* Do you think you might be a hero or role model for others? What qualities, heroic acts, or long-term dedication might they admire in you?

ALL THINGS MUST PASS

Try to imagine being caught in the creative crossfire of John Lennon and Paul McCartney. That was the position that George Harrison found himself in throughout the glory years of the Beatles. In the face of their prolific songwriting, George was lucky to squeeze one, sometimes two, of his own compositions on each new Beatles album. So it should have come as no surprise that when the group disbanded it was George Harrison who exploded into a songwriting frenzy. His first post-Beatles solo effort was the brilliant threerecord set All Things Must Pass, brimming with hit singles, enduring album tracks, and compassionate ruminations about the human condition, such as "Isn't It A Pity," "The Art of Dying," and the great title song.

There is good news and bad news here, as well as news that actually contradicts the title. The good news can be summarized in the parallel phrase "this too shall pass." It is a very comforting and accurate truth that can help you deal with short-term, intense pain and long-term, persistent pain. Remember the feeling of a past suffering, whether physical or emotional, and how it felt as though it would go on forever? Then realize that it is no more. You made it through and you can do it again. There is a way.

The bad news is that the best moments of your life are just that, moments, your greatest successes may pass, and be the seed of failure. The big day, the event you worked so hard for, planned so long for, is here and quickly gone, and now you feel empty rather than fulfilled. Time seems to go by ever more quickly when you hit middle age, and it can suddenly appear that your best years are over.

The seemingly contradictory news is that although on one level all things must pass, on another, still deeper level we do not live only from minute to minute. The past does endure, not just as a distant memory but as a powerful presence in our lives now. A series of career successes, for example, are not simply a haphazard collection of isolated incidents. They are the building blocks of a legitimate sense of pride and accomplishment. Good deeds of justice, charity, and loyalty remain as part of the fabric of our being and help make us who we are. They also form our reputations in the community and inform our relationships with our family, friends, and acquaintances. They are a vital part of the social capital upon which we base our lives. Also, our experiences of celebration, hospitality, prayer, learning, relaxation, exercise, and culture do not disappear from our beings immediately after completion. They, too, are the foundation of our personality.

* If you are in a great deal of pain right now, for any reason, and it has been with you for quite a while, try to remember a past suffering that is gone. How did you handle that one? What helped? Who helped? Is there anything you can do either to get yourself out of the painful situation or learn how to deal with it better?

* How can you remember a wonder-filled past experience? Try visualization. Allow yourself to relive your date with that extraordinary person; a great business, cultural, or athletic accomplishment; the presence of a departed loved one; or an intense spiritual experience. Be quiet and allow yourself to experience the joy once more. Often, the original experience was so intense and all-consuming that it is not possible to take it all in on the first try. Visualization can help you to retrieve what may have been lost. One warning: Remember that you cannot live in the past -- use this not as a crutch but as a tool to move your life forward. 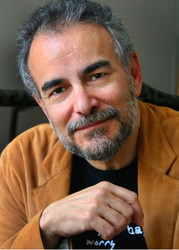 Pete Fornatale is an award-winning broadcaster who has been a fixture on the New York City radio scene for the past forty years. The author of Simon and Garfunkel’s Bookends, he can currently be heard on in the New York area on WFUV radio’s Mixed Bag.

All You Need is Love

And 99 Other Life Lessons From Classic Rock Songs

By Bill Ayres and Pete Fornatale
LIST PRICE $16.95
PRICE MAY VARY BY RETAILER