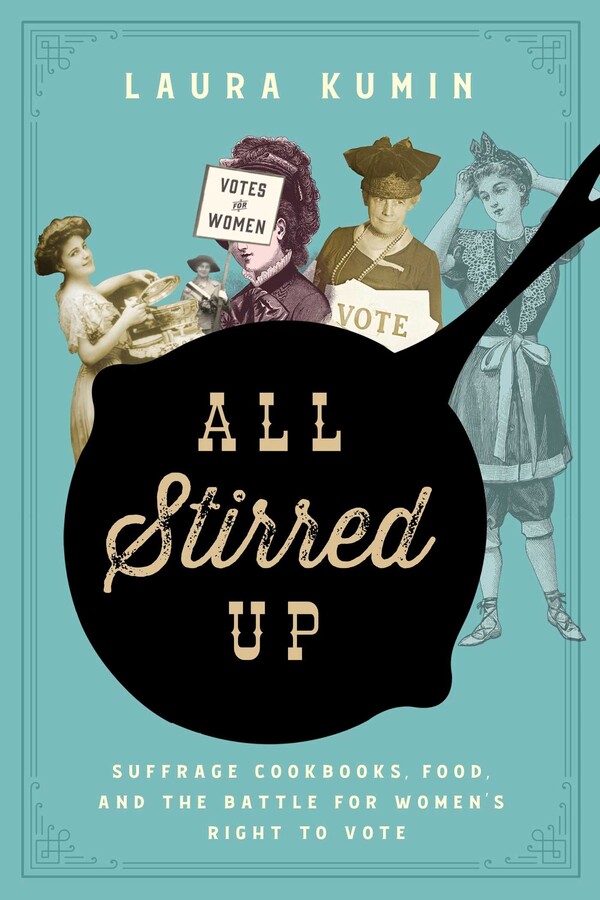 Suffrage Cookbooks, Food, and the Battle for Women's Right to Vote

In honor of the centenary of the 19th amendment, a delectable new book that reveals a new side to the history of the suffrage movement.

We all likely conjure up a similar image of the women’s suffrage movement: picket signs, red carnations, militant marches through the streets. But was it only these rallies that gained women the exposure and power that led them to the vote?

Ever courageous and creative, suffragists also carried their radical message into America’s homes wrapped in food wisdom, through cookbooks, which ingenuously packaged political strategy into already existent social communities. These cookbooks gave suffragists a chance to reach out to women on their own terms, in nonthreatening and accessible ways. Cooking together, feeding people, and using social situations to put people at ease were pioneering grassroots tactics that leveraged the domestic knowledge these women already had, feeding spoonfuls of suffrage to communities through unexpected and unassuming channels.

Kumin, the author of The Hamilton Cookbook, expands this forgotten history, she shows us that, in spite of massive opposition, these women brilliantly wove charm and wit into their message. Filled with actual historic recipes (“mix the crust with tact and velvet gloves, using no sarcasm, especially with the upper crust”) that evoke the spirited flavor of feminism and food movements, All Stirred Up re-activates the taste of an era and carries us back through time.

Kumin shows that these suffragettes were far from the militant, stern caricatures their detractors made them out to be. Long before they had the vote, women enfranchised themselves through the subversive and savvy power of the palate.

Laura Kumin is the author of The Hamilton Cookbook: Cooking, Eating, and Entertaining in Hamilton's World and runs the popular blog "Mother Would Know" Kumin earned a law degree from Columbia Law School and practiced in Washington D.C. for more than two-decades. She lives in Washington D.C. where she now teaches cooking and food history.

"Laura Kumin’s new book about the suffrage movement is a fascinating story of the struggle women faced in the mid 19th-century to win the right to vote. It puts into context the way women have always had to fight for equal rights, to have our voices heard. All Stirred Up is equal parts women’s history and a cookbook with terrific recipes."

While it did not surprise me to learn that suffragists deployed culinary tactics to promote their cause, the breadth of Laura Kumin’s research delighted me chapter after chapter. The book’s opening timeline is especially helpful for placing their efforts into historical, global context. And thanks to Laura’s deep dive into suffrage cookbooks, I’ll feel connected to this voting rights’ revolution whenever I make one of All Stirred Up’s thoughtfully adapted recipes.

Laura Kumin's All Stirred Up is revelatory. The way women suffragists used food and cooking-- their deepest burdens and familial connective tissue--to change the world for themselves and  future generations is a story perfect for the centennial of women's voting rights and years beyond.

– Michael Twitty, author of Kosher/Soul and The Cooking Gene

“A fascinating examination of this pivotal movement in American history—and the irrepressible women who used food as a way to bring their message home.  Well-researched, engaging and filled with delicious recipes that will entertain the mind as well as the palate.”

“A delicious read! All Stirred Up mixes together an appetizing account of suffragists’ use of food as persuasion, a dollop of suffrage history, and some tasty adaptations of recipes from 40 years of suffrage cookbooks. Laura Kumin’s book will delight foodies and feminists alike!”

– Mary Chapman, co-editor of Treacherous Texts: An Anthology of US Suffrage Literature, 1846-1946

“An an engaging read about the time when women were struggling to get the right to vote, and also a charming view of how cookbooks and recipes were part of the suffrage movement. Kumin’s recipes are clear and thoughtful and her mastery of adapting from historic cookbooks shines through in this interesting work.”

“In All Stirred Up, Kumin’s research into the suffrage cookbooks and their place in the American food story reveals a colorful, dynamic tale. Stir up a cake, make a pot of tea, and tuck in for a great read that inspires.”

– Cathy Barrow, author of Pie Squared and When Pies Fly

Suffrage Cookbooks, Food, and the Battle for Women's Right to Vote