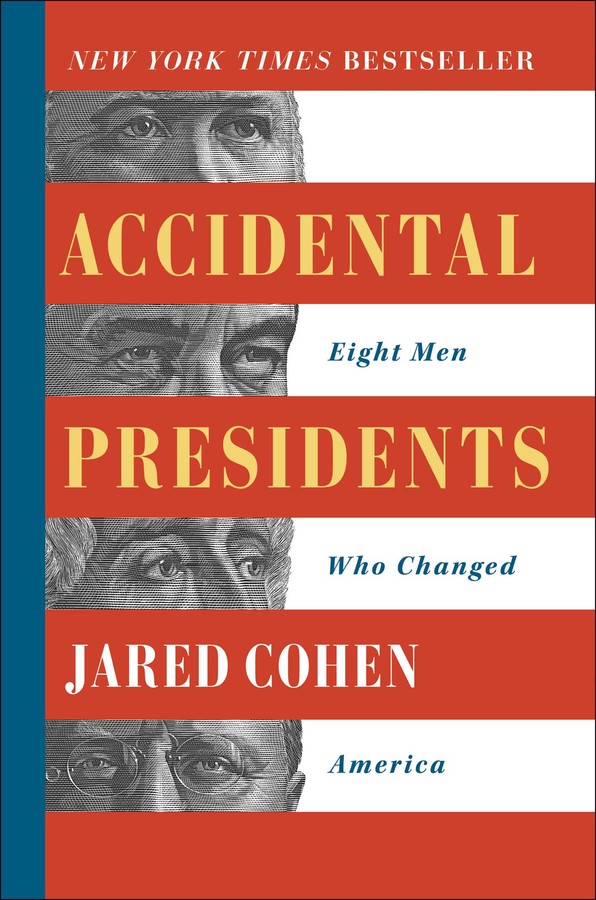 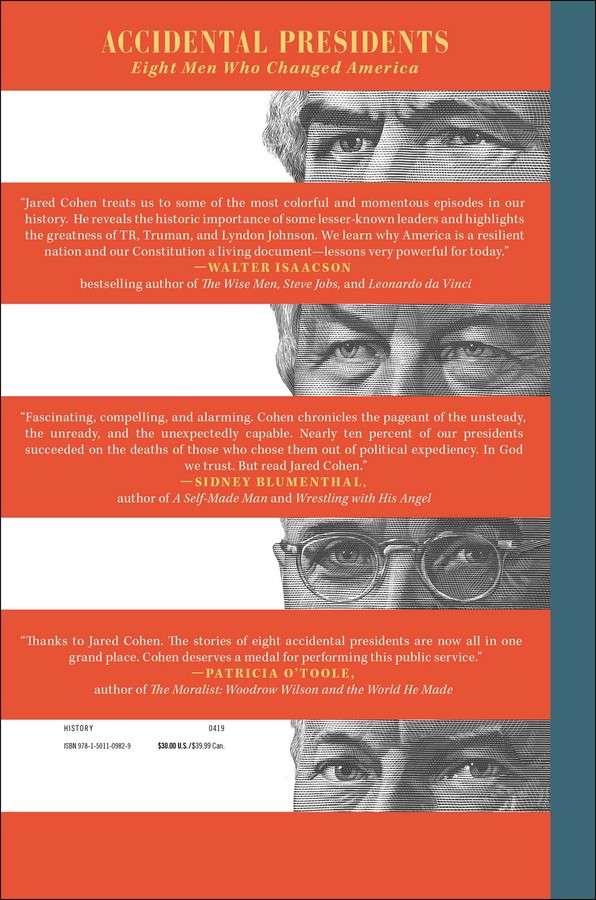 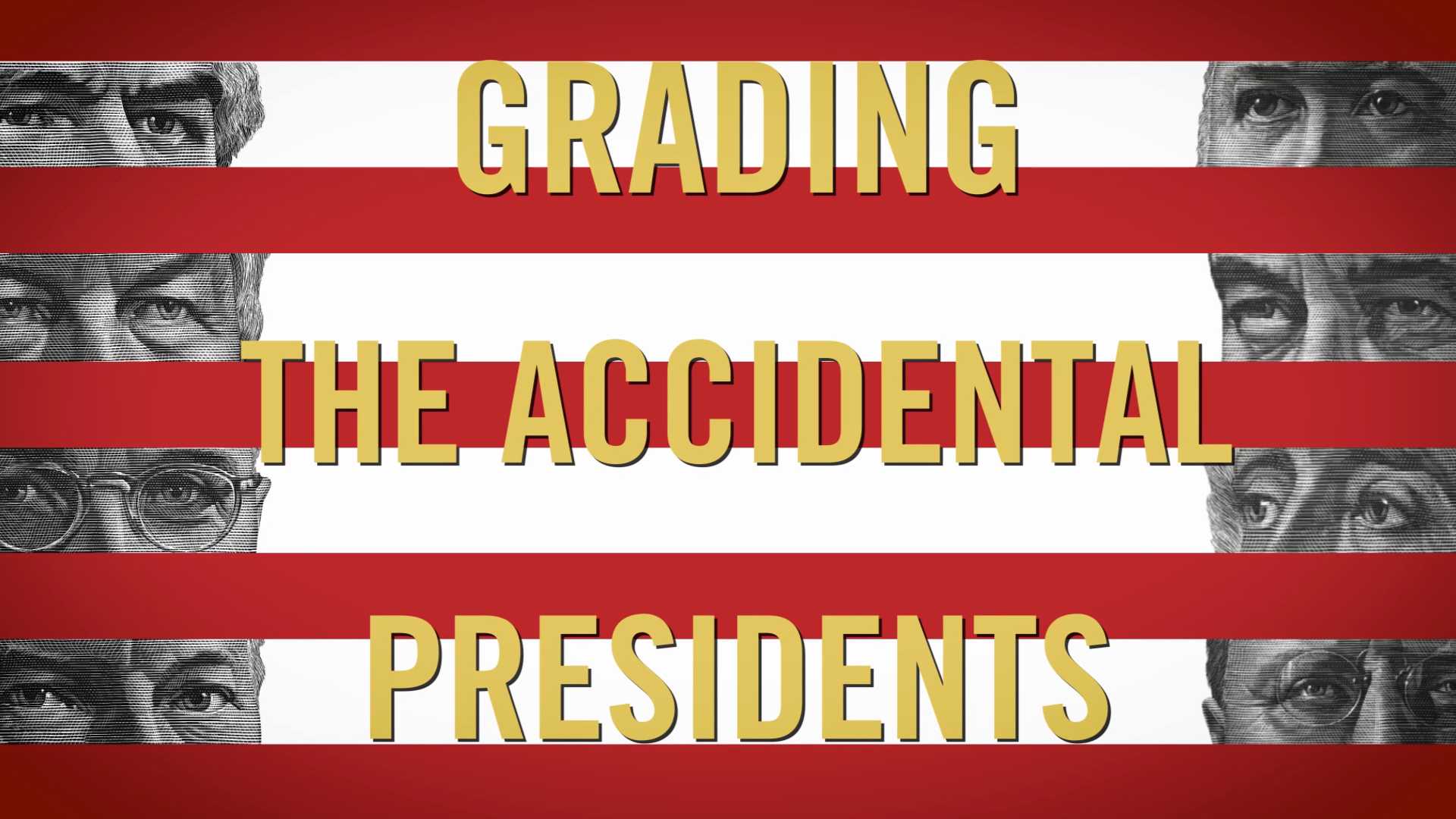 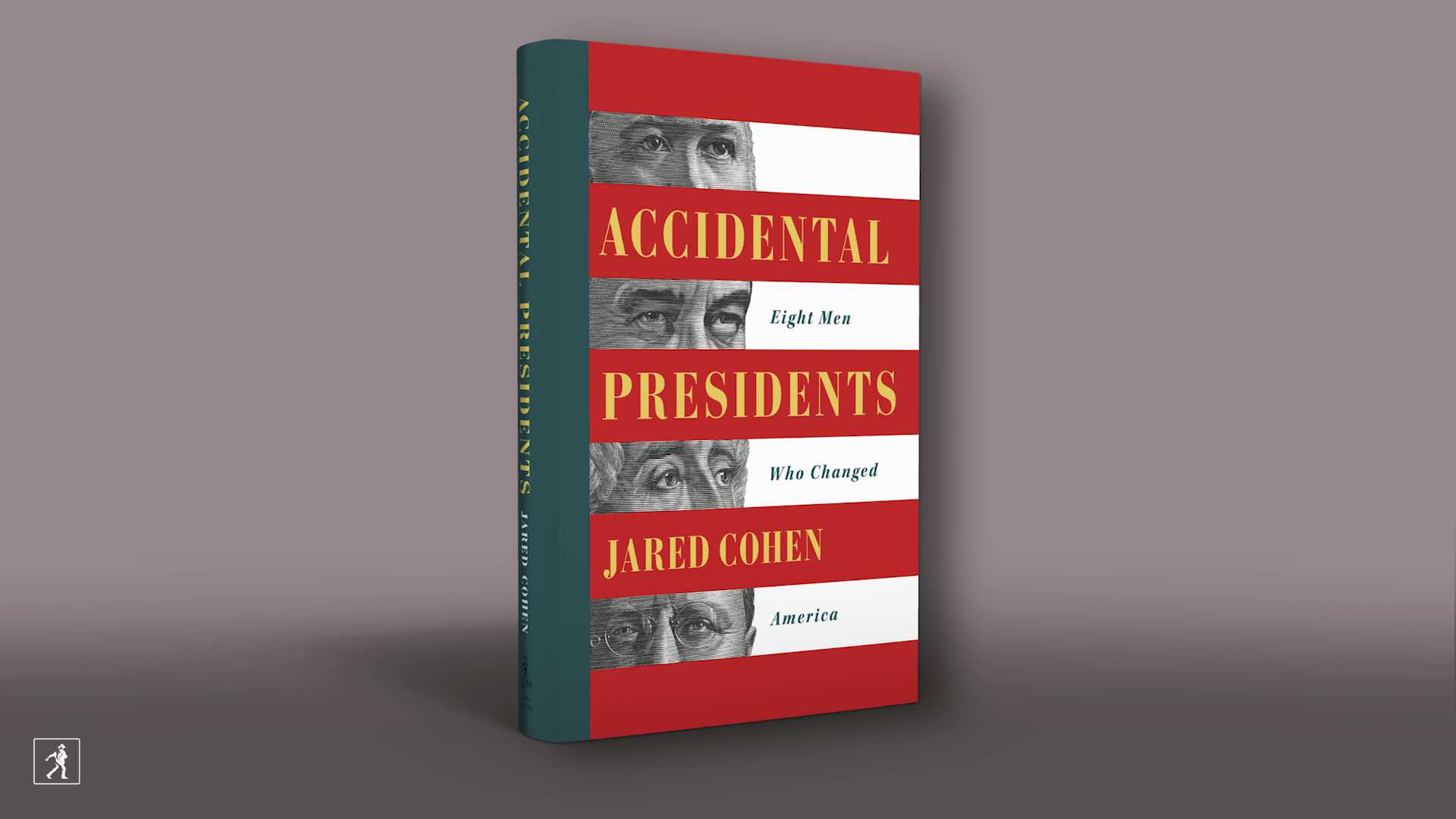 The Power of the Presidency 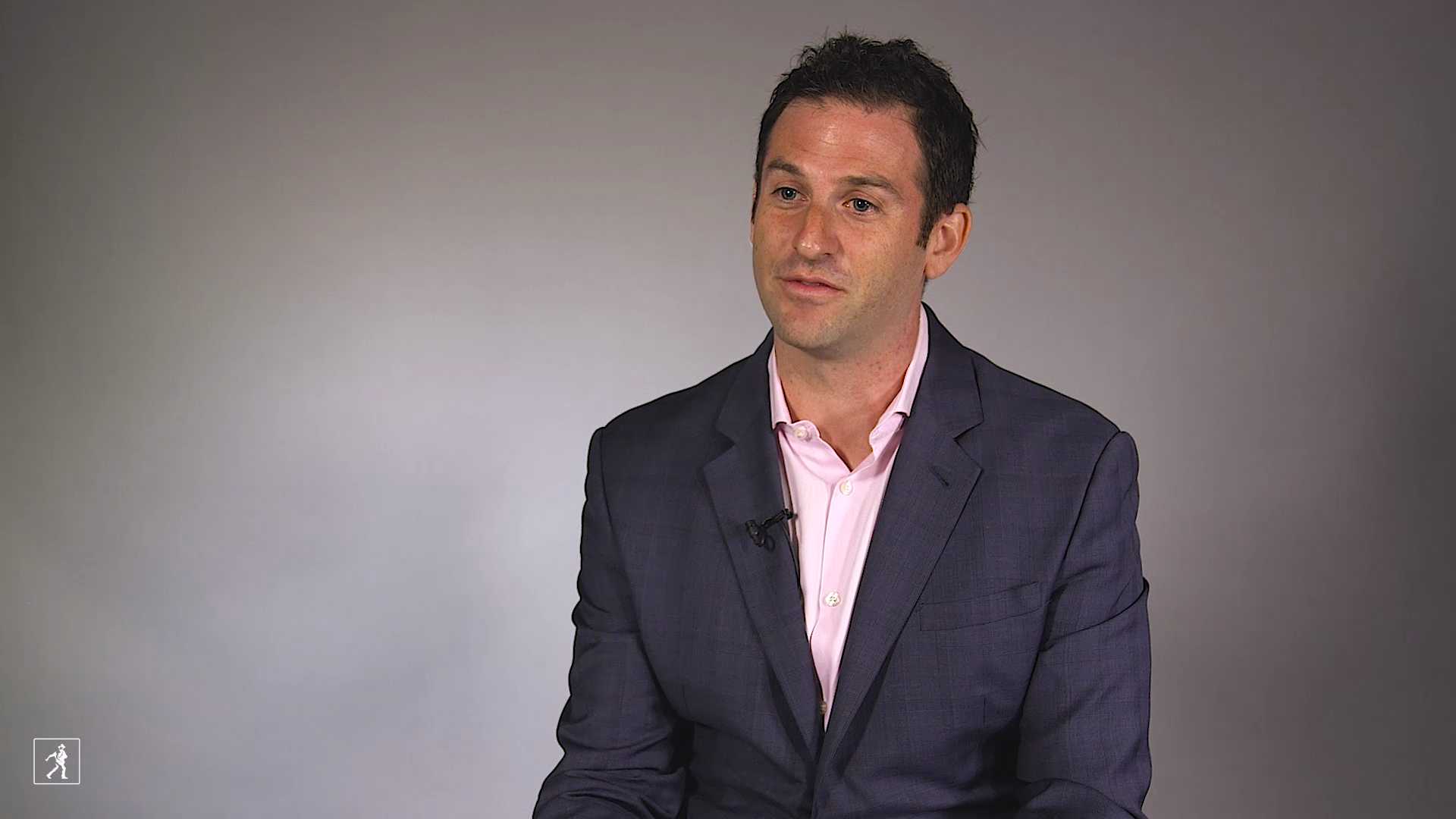 By Jared Cohen
LIST PRICE $30.00
PRICE MAY VARY BY RETAILER

The strength and prestige of the American presidency has waxed and waned since George Washington. Accidental Presidents looks at eight men who came to the office without being elected to it. It demonstrates how the character of the man in that powerful seat affects the nation and world.

Eight men have succeeded to the presidency when the incumbent died in office. In one way or another they vastly changed our history. Only Theodore Roosevelt would have been elected in his own right. Only TR, Truman, Coolidge, and LBJ were re-elected.

John Tyler succeeded William Henry Harrison who died 30 days into his term. He was kicked out of his party and became the first president threatened with impeachment. Millard Fillmore succeeded esteemed General Zachary Taylor. He immediately sacked the entire cabinet and delayed an inevitable Civil War by standing with Henry Clay’s compromise of 1850. Andrew Johnson, who succeeded our greatest president, sided with remnants of the Confederacy in Reconstruction. Chester Arthur, the embodiment of the spoils system, was so reviled as James Garfield’s successor that he had to defend himself against plotting Garfield’s assassination; but he reformed the civil service. Theodore Roosevelt broke up the trusts. Calvin Coolidge silently cooled down the Harding scandals and preserved the White House for the Republican Herbert Hoover and the Great Depression. Truman surprised everybody when he succeeded the great FDR and proved an able and accomplished president. Lyndon B. Johnson was named to deliver Texas electorally. He led the nation forward on Civil Rights but failed on Vietnam.

Accidental Presidents adds immeasurably to our understanding of the power and limits of the American presidency in critical times. 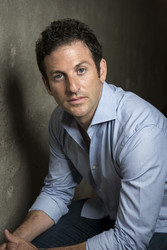 Jared Cohen is the founder and CEO of Jigsaw at Alphabet Inc. He also serves as an Adjunct Senior Fellow at the Council on Foreign Relations. Previously, he ran Google Ideas at Google Inc. and served as chief advisor to Google Executive Chairman Eric Schmidt. From 2006 to 2010 he served as a member of the Secretary of State’s Policy Planning Staff and as a close advisor to Condoleezza Rice and Hillary Clinton. He is the New York Times bestselling author of Accidental Presidents, The New Digital Age, Children of Jihad, and One Hundred Days of Silence: America and the Rwanda Genocide. He lives in New York with his wife and two daughters.

“What a delightful book and brilliant concept! Jared Cohen treats us to some of the most colorful and momentous episodes in our history when we unexpectedly got a new president. He reveals the historic importance of some lesser-known leaders, such as John Tyler and Millard Fillmore, and highlights the greatness of Teddy Roosevelt, Harry Truman and Lyndon Johnson. Through their fascinating tales we learn why America is such a resilient nation and our Constitution a living document—lessons very powerful for today.”—Walter Isaacson, #1 New York Times bestselling author of Leonardo da Vinci

“Fascinating, compelling and often alarming. With astonishing story after story, Jared Cohen chronicles the whole pageant of the unsteady, the unready and the unexpectedly capable. Nearly ten percent of our presidents succeeded because of the deaths of those who chose them mostly out of political expediency to be forgotten number twos. Will we luck out in the future with a surprising Harry Truman or with a wrecker like Andrew Johnson? In God we trust. But read Jared Cohen.” —Sidney Blumenthal, author of A Self-Made Man and Wrestling with His Angels

“Thanks to Jared Cohen. The stories of eight accidental presidents are now all in one grand place. Cohen deserves a medal for performing this public service.” —Patricia O’Toole, author of The Moralist: Woodrow Wilson and the World He Made

“History is the most contingent of enterprises, and little has proven more contingent than the nature of the American presidency. In this eloquent and often surprising book, Jared Cohen explores how fate has shaped the office--and all of us. In an age marked by widespread concerns about the character of the person who reaches the pinnacle (by whatever means), Cohen's study is illuminating and resonant.”"—Jon Meacham, #1 New York Times bestselling author of The Soul of America: The Battle for Our Better Angels

"This is a fascinating prism through which to look at American history ... It is a well written fast-paced book that is filled with interesting facts and insights. Anyone who is interested in American history will delight in it." —Fareed Zakaria, CNN

"A deep dive into the terms of eight former presidents is chock-full of political hijinks—and déjà vu ... chapters flick at familiar themes: trust busting, scandal wrangling, and brawls that read like highbrow TMZ ... The book is also a reminder that, when it came to succession, America’s founders basically winged it." —Vanity Fair

“One of the many insights to be found in Accidental Presidents is that history unfolds in death as well as in life.”—The Wall Street Journal

“Illuminating…[a] genuinely interesting history on a topic that has never been addressed in this depth.”—Booklist

“Accidental Presidents is a compelling and comprehensive book of history that shines a light on unexplored corners of our history ... In his typically engaging and gripping style, Jared Cohen tells us why it is not easy to amend the Constitution and why it should be amended. He explores the complexities of the American Constitution and politics as a gifted story-teller ... It will resonate for a long time to come among the scholars and students of American history."—Washington Review of Books

“While much is known about the two successful accidentals, Roosevelt and Truman, and the partially-successful Lyndon, the latter Johnson, much of the book’s treasure lies in earlier, lesser known accidentals.”—New York Journal of Books

"Every single sentence in this books counts."—Fox News

By Jared Cohen
LIST PRICE $30.00
PRICE MAY VARY BY RETAILER